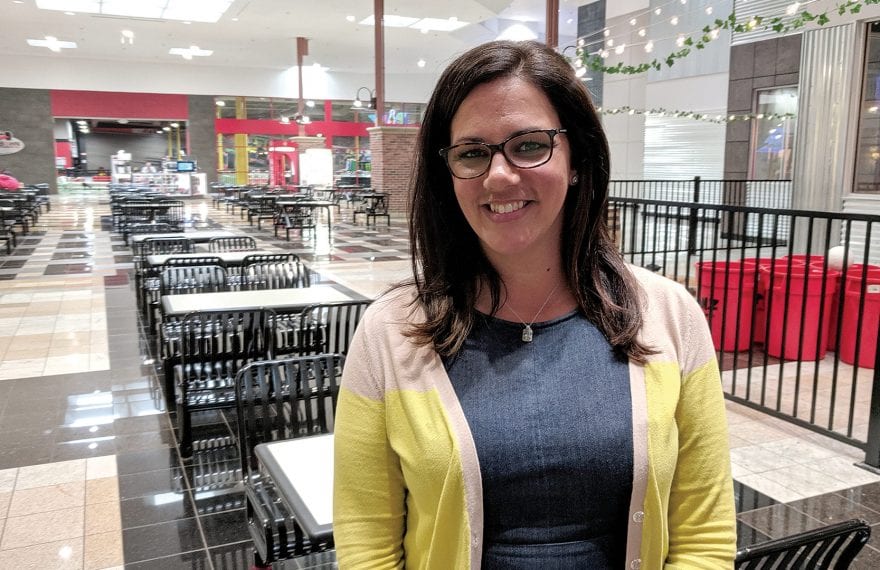 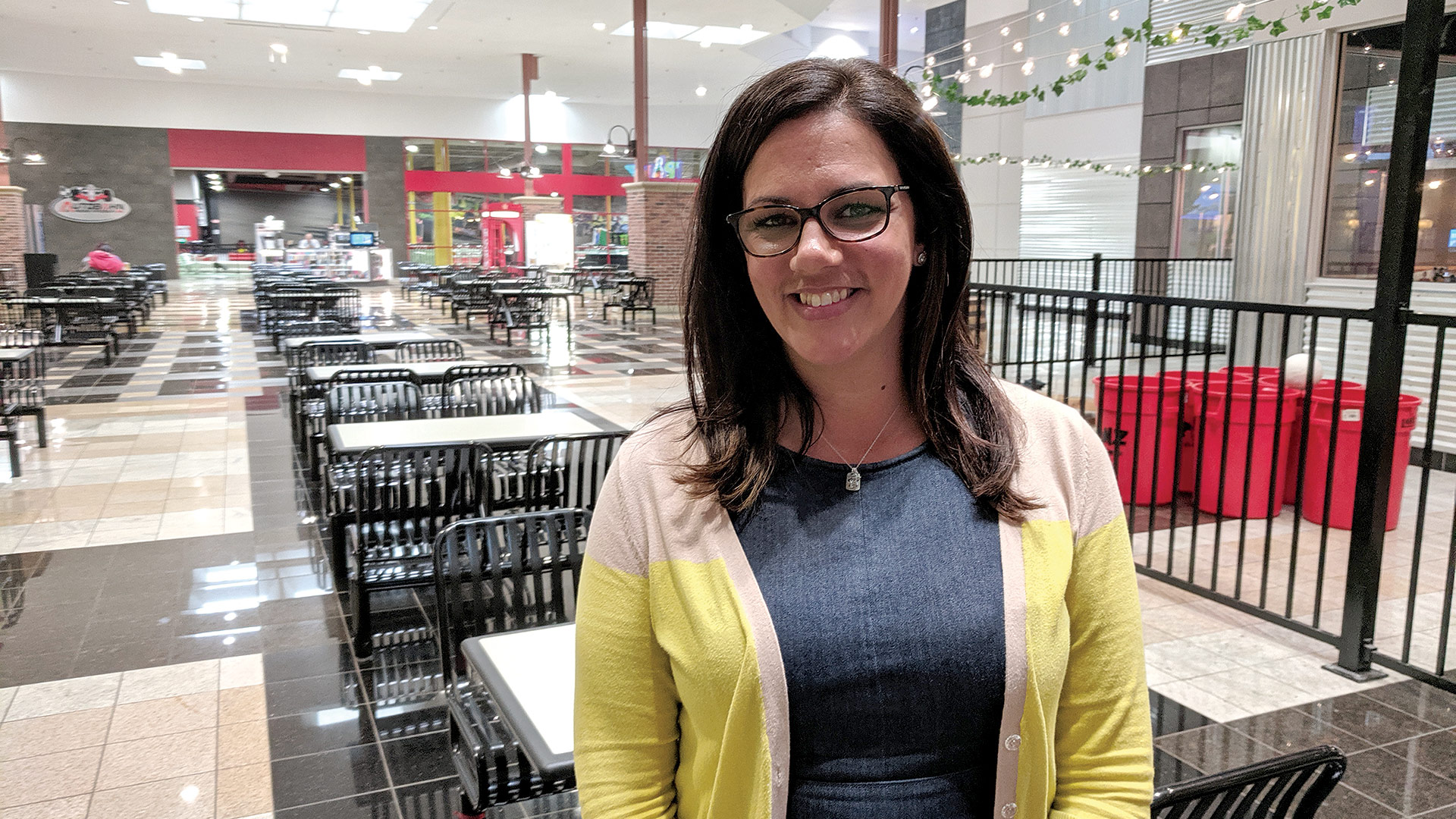 Hampshire Mall has seen its share of changes over the decades, particularly in recent years with the onslaught of online retail that has severely challenged brick-and-mortar shopping centers across the country. But this complex on busy Route 9, in a largely affluent, college-dominated region, has recrafted itself as an entertainment destination, where people can do some shopping, yes, but also enjoy go-karts, bowling, laser tag, a movie, and more. The takeaway? Malls may be challenged, but they’re not obsolete yet.

When Bill Hoefler purchased Interskate 91 at the Hampshire Mall 19 years ago, the rollerskating destination had been open for several years, and the mall itself had been thriving, more or less, for two decades.

He wondered how that could be. “Hadley’s population was only about 3,800.”

But the commercial corridor on Russell Street had been growing for some time, he went on, serving as a bridge between Amherst and Northampton, two communities with eclectic, college-centric populations where it could sometimes be difficult to build.

“Walmart had just been built in ’98,” he noted, “and we knew the mall had plans to demolish the theaters and build new ones. Then you had Chili’s and Applebees just a half-mile away. Those companies usually will not build where there’s not a 100,000 population density within a five-mile radius. So why are they in Hadley?”

Fast-forward almost 20 years, and Route 9 is even more built out than before. Interskate continues to draw a loyal clientele, and Hoefler has expanded his adjoining laser-tag operation from 2,100 square feet to 4,500. And Hampshire Mall — at a time when malls, especially those not bordering major highways, have been rocked by the online retail revolution — is not just surviving in tiny Hadley, but bringing in new tenants, many of them entertainment-oriented.

“It’s a hotbed,” Hoefler said. “People in Western Massachusetts will drive 45 minutes to do what they want, but why not just go to Holyoke? Well, a lot of people north of Holyoke just won’t go that far; they stop here. Or they come in from the west. We even have people from Westfield who would rather come here than mess with the perception of the ‘city mall’ in Holyoke.”

Lynn Gray has a lot of experience at Hampshire Mall as well, starting her career in marketing there about two decades ago, when Kmart was still a thriving anchor, and Cinemark was turning the old six-screen movie theater into a 12-screen megaplex. After leaving to work at another Pyramid Management Group property a decade ago, she returned around the start of 2016 and now serves as the mall’s general manager.

“So I got to see where the center was 20 years ago and where it is today, and the changes in between have been really exciting,” she said, rejecting the idea that brick-and-mortar retail is in permanent decline.

Many still desire that hands-on, instant-gratification shopping experience, she added, which explains why Hampshire has brought in new retail tenants in recent years, from chains like PetSmart to service-oriented shops like T-Mobile and Nail Pro & Spa to local favorites like Faces, which previously spent decades in downtown Northampton.

But it has also morphed into an entertainment destination, complementing long-time tenants Interskate and Cinemark with newer arrivals like Autobahn Indoor Speedway and PiNZ.

“Twenty years ago, there was a theater here, which is entertainment. We had rollerskating and laser tag, which is entertainment,” Gray said. “Over the last several years, as a lot of developers and shopping centers have moved away from big boxes and wondered what to do with some of the changes in retail, they’ve been introducing more and more entertainment. We’ve followed suit, but Pyramid has always been at the forefront of that anyway. Having a rollerskating rink at a shopping mall is not traditional.”

Not much has been traditional about successful malls in recent years, Hoefler agreed, but the business model is working in Hadley.

“When we got here, we saw it was the beginning of an upswing, and we made it our home,” he said. “We’ve been big cheerleaders for the property, and we love being here.”

Jake Savageau, general manager of Autobahn, feels the same way. The karting chain boasts 12 locations across the country and attracts a broad clientele, from parents bringing young children during the day to a college and adult crowd at night, racing electric karts that can reach 50 mph. The center’s oldest racer to date was a 95-year-old.

“So much entertainment is coming into malls,” he said, “so when people come in expecting to buy clothing and other items, they see us making a lot of noise, and it attracts their attention — ‘what’s going on here?’ It makes them stay in the mall longer and spend more money and have a good time at the end of the day.”

PiNZ, a small, Massachusetts-based chain, is another recent addition, bringing bowling, arcade games, and a full restaurant and bar to the mall — plus the most recent attraction, axe throwing. General Manager Jessica Ruiz said PiNZ attracts the same kind of crowd flow Autobahn does — younger kids during the day, college students and adults at night. 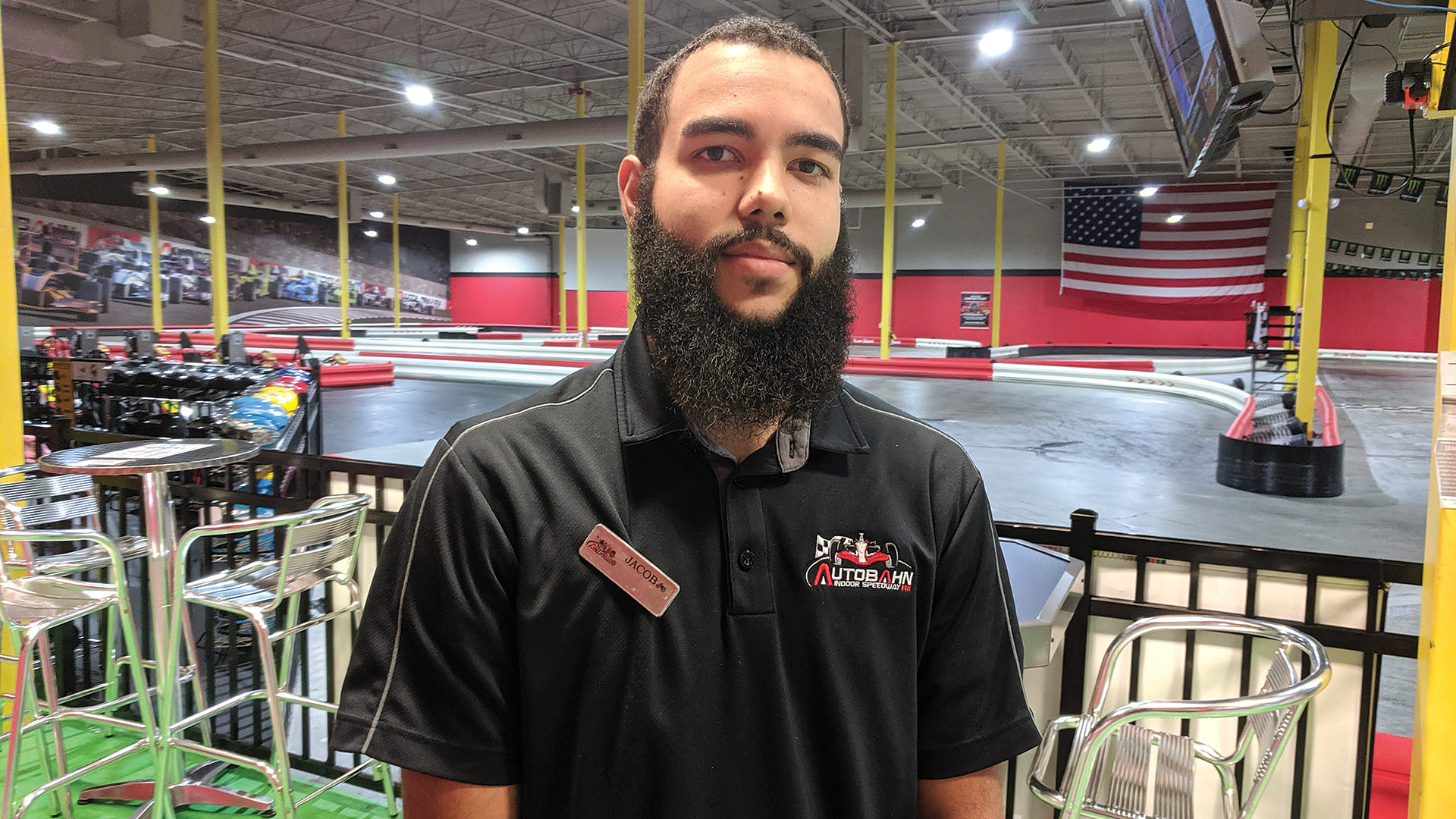 Jake Savageau says shoppers sometimes discover the entertainment options, like Autobahn Indoor Speedway, when they arrive — and then return to spend more time and money in the mall.

“They love it,” she said of the axe-throwing room. “For the most part, people are surprised they like it as much as they do. Everyone’s looking for an experience now. And that’s what we give them, with all the activities we offer here.”

The mall has begun installing ‘patios’ outside the PiNZ eatery and nearby Arizona Pizza, offering a sort of sidewalk-café experience that connects diners to the mall as a whole. Speaking of connecting to the mall, neither PiNZ nor Autobahn has an exterior entrance — the idea is to bring people into the mall to see what else catches their interest.

The Cinemark theaters still do well, Gray said, and continue to invest in the space, including new seating last year and updates to the HVAC system to become more energy-efficient. “They’re making a lot of changes and reinvesting because this is a great, desirable location for them, too.”

Pyramid has made capital investments as well, she added, not only in space improvements to attract new dining, shopping, and entertainment options, but efforts over the past decade to install new lighting, new flooring, restroom updates, and seating modifications to make the center more attractive to both customers and retailers.

“The food court was redone, we have new digital display directories … it’s been really nice to see,” she said. “Fifteen or 20 years ago when I came here, it was the cobblestone and a sort of ’80s-’90s vibe, and today, it’s fresh, it’s exciting, it’s bright.”

With new retail and entertainment tenants in the fold, she would like to see more dining options come on board — perhaps some locally owned eateries, or even a brewery. The idea is to constantly evolve the mix to transform what was once retail-dominant into a center where people can have a diverse experience and spend plenty of time — and money.

Malls aren’t done evolving, Gray said, noting that even online retailers, like Warby Parker, are showing up in malls.

“Even Amazon is doing pop-ups inside shopping centers. The online world and the e-commerce world does still look to brick and mortar to enhance their brands as well. While you can buy things on Target.com, people still want that experience and that instant gratification, while other people can wait for their product. A lot of people still want to come into a mall, into a setting where there’s more than one option, to see, touch, and feel their products before they make their purchase.”

That said, no one managing malls today is downplaying the impact of online retail.

“Your online presence is always going to be there — that’s the wave of the future,” Gray told BusinessWest. “But by introducing an entertainment component, it’s about the experience — and we’ve taken that experience to a new level. With the collection of all these experiences all under one roof, the goal for us is to make sure we’re all things to all people and we provide the customer with what they want, when they want it.” 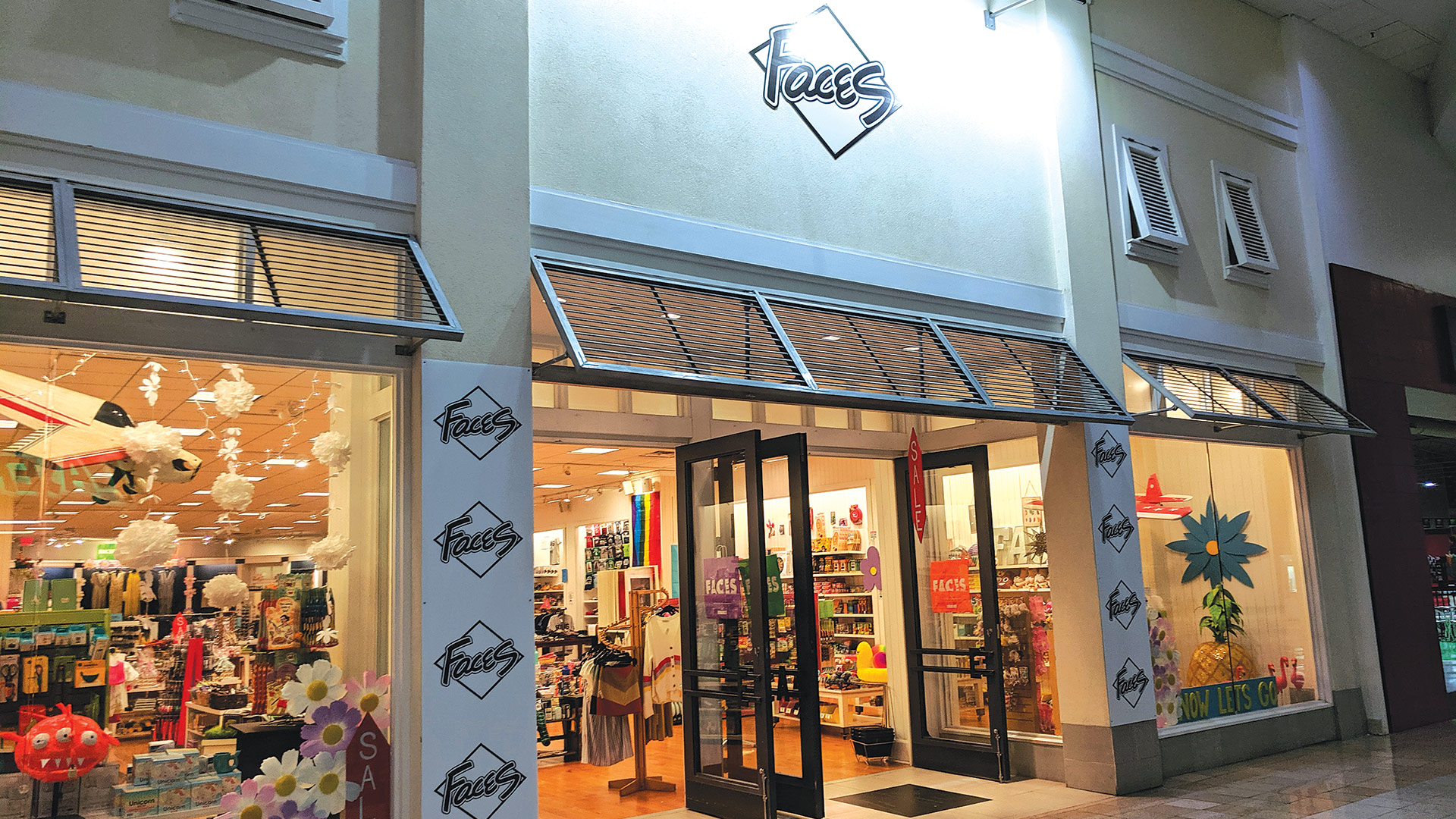 Faces built its name for 33 years in downtown Northampton, but now it’s one of the newest retail options a few miles to the east at Hampshire Mall.

Hampshire Mall is well-positioned to roll with changes in shopping habits, Gray added, because of its community demographics and the economic vitality of Route 9 in general.

“Retailers are looking for population density, but they’re also looking for household income thresholds, and this area offers so much. It’s a very affluent community, the crossroads between Northampton and Amherst,” she explained. “But we’re also in great proximity to a wealth of the college student population, which definitely is a driver for this area.

“Twenty years ago, this section of Route 9 was completely different than what it looks like today,” she went on. “There wasn’t a Lowe’s, a Home Depot, a Starbucks. Now all these things exist here, and this becomes a very desirable area for a lot of different uses. LL Bean is moving across the street; Autobahn is open here. A lot of people see this as valuable real estate because of its access to the affluent community and the college students.” 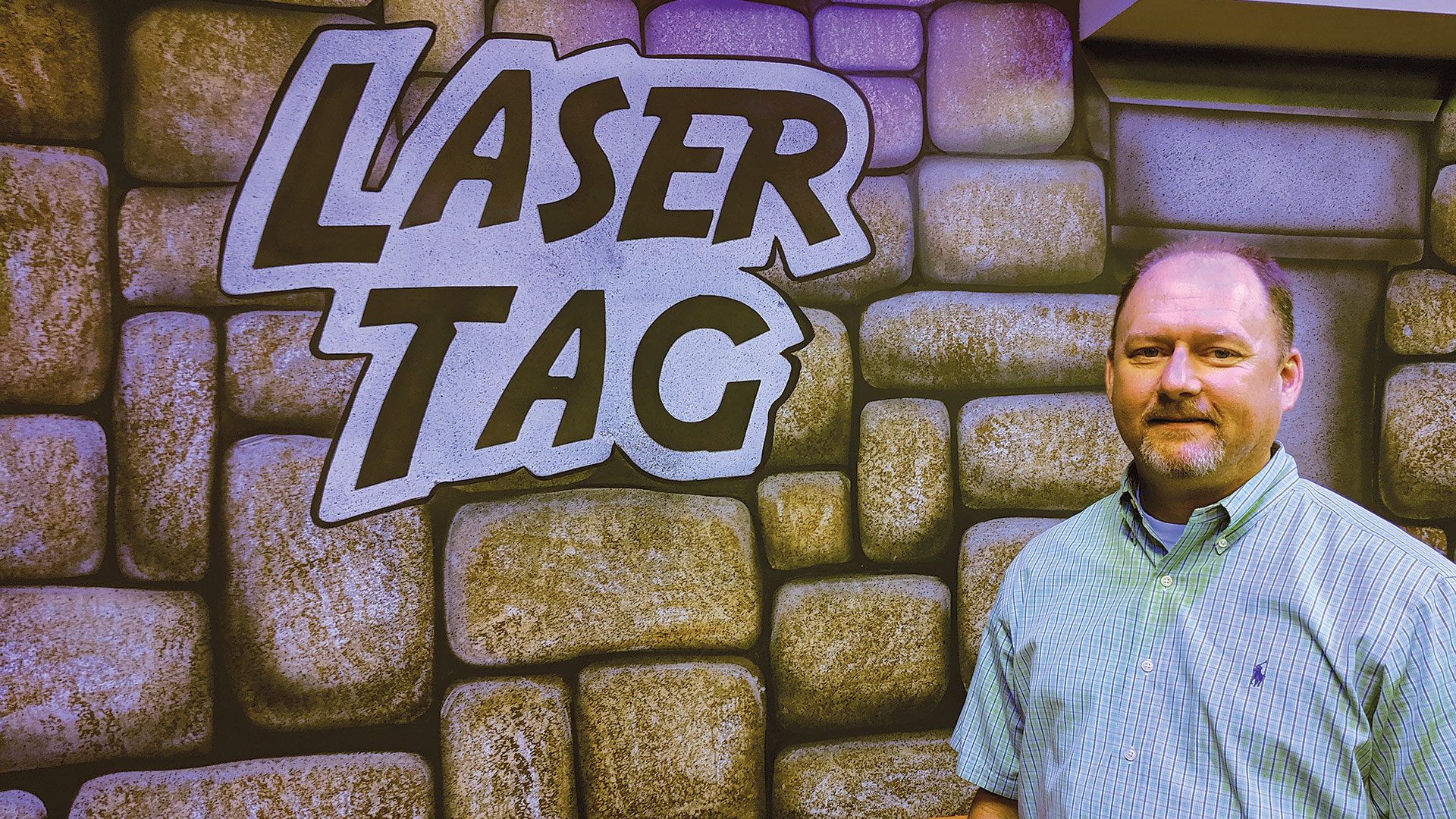 Bill Hoefler says he enjoys being part of the “funky and eclectic” mix of tenants at Hampshire Mall.

Faces is a good example, she said. “It’s traditional retail, if you will, but with a non-traditional flair,” she said of the quirky store that opened in downtown Amherst in 1971 but recently ended a 33-year run as a downtown Northampton mainstay.

“They relocated to Hampshire Mall because they saw the collection of entertainment and dining and all the uses they wanted to be around to support their business for the long term,” Gray noted. “I think that’s a testament to how, when you put the right people under the same roof, people are more drawn to come in, and businesses are more drawn to open new locations.”

Hoefler has certainly seen his share of mall evolution, but continues to draw families to the uniquely shaped skating rink above the food court and his new, cutting-edge laser-tag center downstairs. “We didn’t just want to move; we wanted to do it bigger, better, with the latest technology.”

The skating business ebbs and flows, he added, but in perhaps unexpected ways; when the economy is good, he sees new faces, but he typically does best when the economy is flat, because he has a loyal clientele, largely middle to lower-middle class, that appreciates an affordable entertainment option. “Even when times are tough, they still come skating.”

Now that those entertainment options have expanded, Hampshire Mall’s target audience — a mix of college students, factory workers, agricultural families, and more — have additional reasons to make their way to the mall.

“We’re proud of our history,” Hoefler said. “We’re proud to be in the mall. We’re glad to be part of the mix that keeps this funky and eclectic. It’s a good time.”