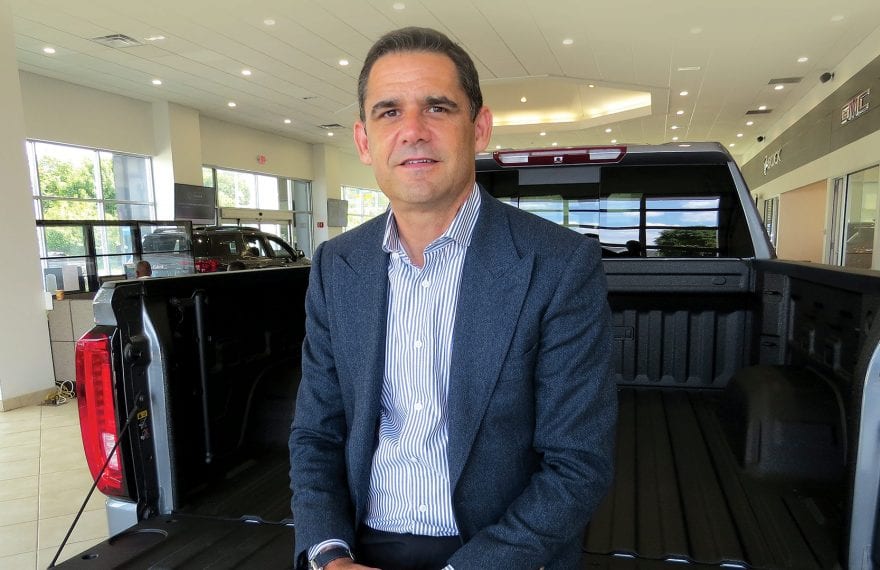 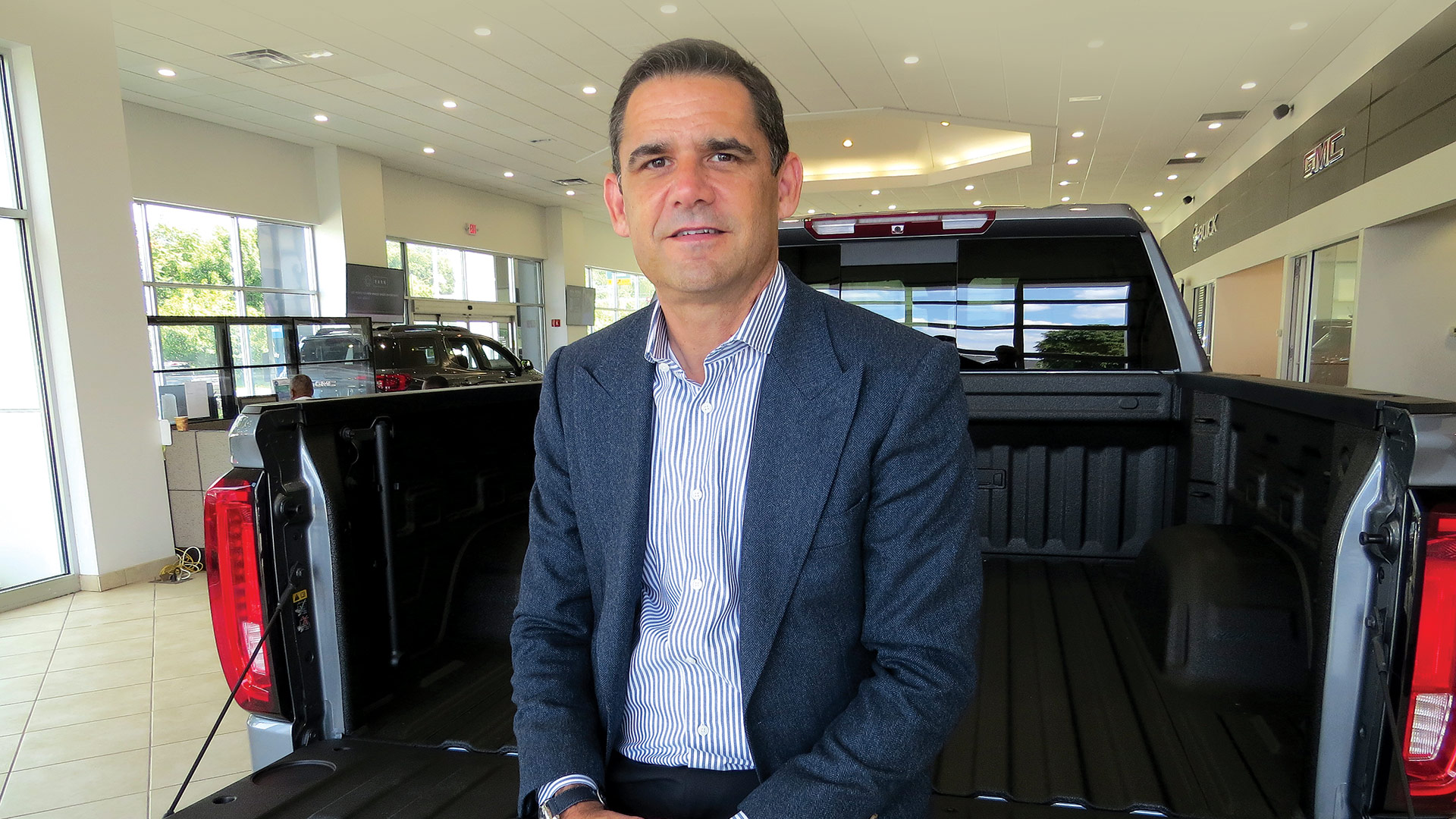 While most of the focus in the auto-sales market has been on the meteoric rise of the SUV, pick-up truck sales have also been climbing, and for the same reasons. Like SUVs, the trucks now offer many of the features and amenities of a car — from leather seats to solid gas mileage.

Ben Sullivan notes that while SUVs and cars seem to be making all the news these days — the former because of how well they’re selling, and the latter because how they’re not selling — there is that third segment of the market that is making a lot of noise in its own right; trucks.
This is not a recent phenomenon, noted Sullivan, chief operating officer for Balise Motor Sales, adding that truck sales have been solid for some time and especially since the end of the recession and during the recent, and prolonged period of relatively low gas prices. But the number of truck sales continues to be move higher, and for several reasons, one in particular.

“What we’ve seen over the past decade is a significant investment by the manufacturers in not only styling, but ride comfort, quietness, electronics, safety equipment, and especially fuel economy,” said Sullivan. “To the point where they’ve made the pick-up truck probably the primary choice for people; they can drive it to the country club on the weekend and to a work site during the week. It gives people a lot of flexibility.”

He noted that while the sales of mid-sized, half-ton trucks (think Ford 150, Chevy Silverado, and Dodge Ram, the three most popular sellers, and in that order) have been relatively flat, there is considerable movement in the smaller-truck market, featuring brands like the Toyota Tacoma, Ford Ranger, and Chevy Colorado.

He called this development a “resurgence,” because small trucks were popular in the ’80s, then things cooled off considerably, and now, they’re picking up again (pun intended), and in rather dramatic fashion.

But while the smaller trucks are selling, there is solid movement across the board, especially when there are incentives available.
Indeed, Jeff Sarat, owner of Sarat Ford Lincoln in Agawam, said he normally sells about 20 to 25 super-duty trucks — that would be the F-250 through F-550 and up — each July. Last month, he sold 54, more than a 100% increase. 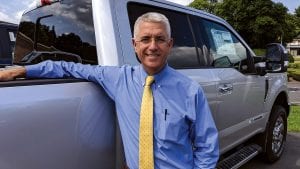 “Ford came out with some really aggressive programs — 0% for 72 months – so they created a market, which was phenomenal for business,” he said. “I had multiple customers buy more than one, because businesses — and that’s really who’s buying those type of trucks — they haven’t had that deal for three years.”

The response was quick, too, he added, as Ford didn’t even start the promotion until mid-July. “My guys just got on the phone and started calling people: “hey, we can lower your payment 100 bucks and put you in a brand-new truck.’ And people were flocking in. It was awesome.”
Ford agrees, extending what was supposed to be a two-week promotion through Labor Day, creating worries that Sarat might actually run out of trucks before the October-through-December season, which is traditionally a good time for truck sales — he usually sells about 100 super-duties over those three months — as businesses make year-end purchases for tax purposes.

Looking ahead, those we spoke with said truck sales, like SUVs, will continue to move higher at the expense of the car, because, again like SUVs, the product continues to evolve, improve, and provide more of what consumers are demanding.

Sullivan recently relocated to Western Mass. from Texas, specifically the Dallas area. The Lone Star State is known for many things — from oil to cattle to Friday night football — but it might just be the pick-up truck capital of the world.

“They really like their pick-ups in Texas,” he said with a smile, noting that while nationally, one auto purchase in five is a pick-up, in Texas, it’s at least one in four. And in keeping with the state’s character, bigger — and better-appointed — is better.

“You’re not a gentleman cowboy unless you’re driving an F-250, which is a diesel engine, with King Ranch leather interior,” he said referring to the expensive brand of leather from that ranch in Texas. “And that thing is probably an $80,000 truck by the time everything is said and done.”
Western Massachusetts, and the Northeast as a whole, is a long way from Texas, geographically and also with regard to the popularity of pick-ups, but this region is gaining some ground in that regard, if you will, and numbers supplied by Sullivan bear this out.

He said that since the start of the year in Massachusetts, Connecticut, and Rhode Island, roughly 300,000 vehicles have been sold. Of those, 31,000 would be considered mid-sized, half-ton trucks; 20,000 are larger work trucks, and 13,000 are smaller, quarter-ton trucks, leaving a total of 54,000 pickups sold to date, not quite 20% of the total volume of vehicles.

And, as noted, while the biggest surge has been with the smaller trucks, sales are steady across the board, thanks to a still-solid economy that is fueling sales to consumers and businesses alike, and especially the former.

“Those guys are having good years, and they’re adding people,” said Sarat, referring to the builders, contractors, landscapers, and others that rely on larger trucks and work them hard. “When the economy is up, it’s good for everybody, and that especially helps us because we specialize in trucks.”

And the numbers are only expected to climb higher for those reasons cited earlier by those we spoke with. Where once people had to sacrifice things like comfort, luxury, room, technological bells and whistles, and especially gas mileage when they bought a pickup, now, they don’t have to.

Indeed, Sarat used the Ford F-150 to get his points home. This model remains popular among non-commercial drivers, although some businesses use them in their fleets as well. ‘I drive one,” Sarat said. “If you have a family of five, you can all hop in it and go somewhere — and put something in the bed if you need to.”

And, as noted, the trucks are becoming more car-like in terms of comfort and features which each passing model year.

“Every year, the technology gets better, and the safety features get better,” Sarat said. “I have an app on my phone that I can use to start my truck anywhere in the world. If a check-engine light goes on, from that app on my phone, I can see, ‘OK it’s an oxygen sensor, I’ve got to get it in for service,’ or maybe it’s nothing major, and it’s on because this is something I can fix.”

Safety features like self-parking and anti-collision assist are common in today’s trucks as well, and self-driving vehicles aren’t far away, he added. Plug-in hybrid options are creeping into the truck market as well, for people who crave fuel efficiency – or just want to use less fossil fuels. Even traditional, gas-powered trucks are being built with fuel economy in mind.

“I just drove to Ohio last week with my son, 580 miles. And I got out there on one tank of gas,” he said. “My fuel economy was better than I’ve ever had in any truck. Once I got out there, I still had about 100 miles left. That, to me, was impressive.”

Whether it’s efficiency, safety, or other technology, “it’s slowly getting better,” Sarat said. “It’s ever-changing. They’re definitely not stagnant, that’s for sure.”

Sullivan agreed, adding that all these amenities obviously come with a cost, but it is one that consumers seem ready and willing to pay.

“Manufacturers still have to make the affordable work trucks,” he explained, adding that there’s a work-truck grade, a grade above that, and maybe a few above that. “But by the time you’re done with the leather interiors, the technology and the touch-screen displays, the heated and cooled leather seats, you can drive the price of those trucks up quite a bit.”

By that he meant north of $60,000 or $70,000 — and even higher if one wants a fully loaded F-150 King Ranch. And what’s interesting, he noted, is that the manufacturers haven’t yet determined just what the ceiling is for these vehicles in terms of luxury and appointments — and what people might be willing to pay for all that.

“What the manufacturers have been playing with at the top is … ‘how much truck is too much so that no one will buy it?’” he told BusinessWest. “I don’t think they’ve found that yet.”

While Texas and the rest of the pick-up-truck buying world awaits an answer to that question, dealers here and seemingly everywhere continue to record healthy sales of the vehicles.

It’s a movement that seems destined to continue and probably accelerate, because today’s trucks are not yesterday’s trucks.
As Sarat noted, they are anything but stagnant. They are moving — in every sense of that word.