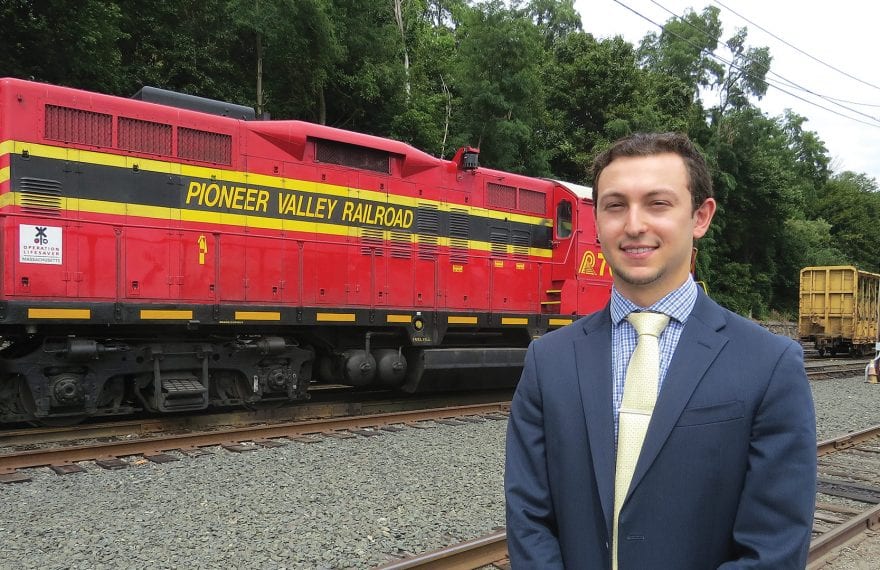 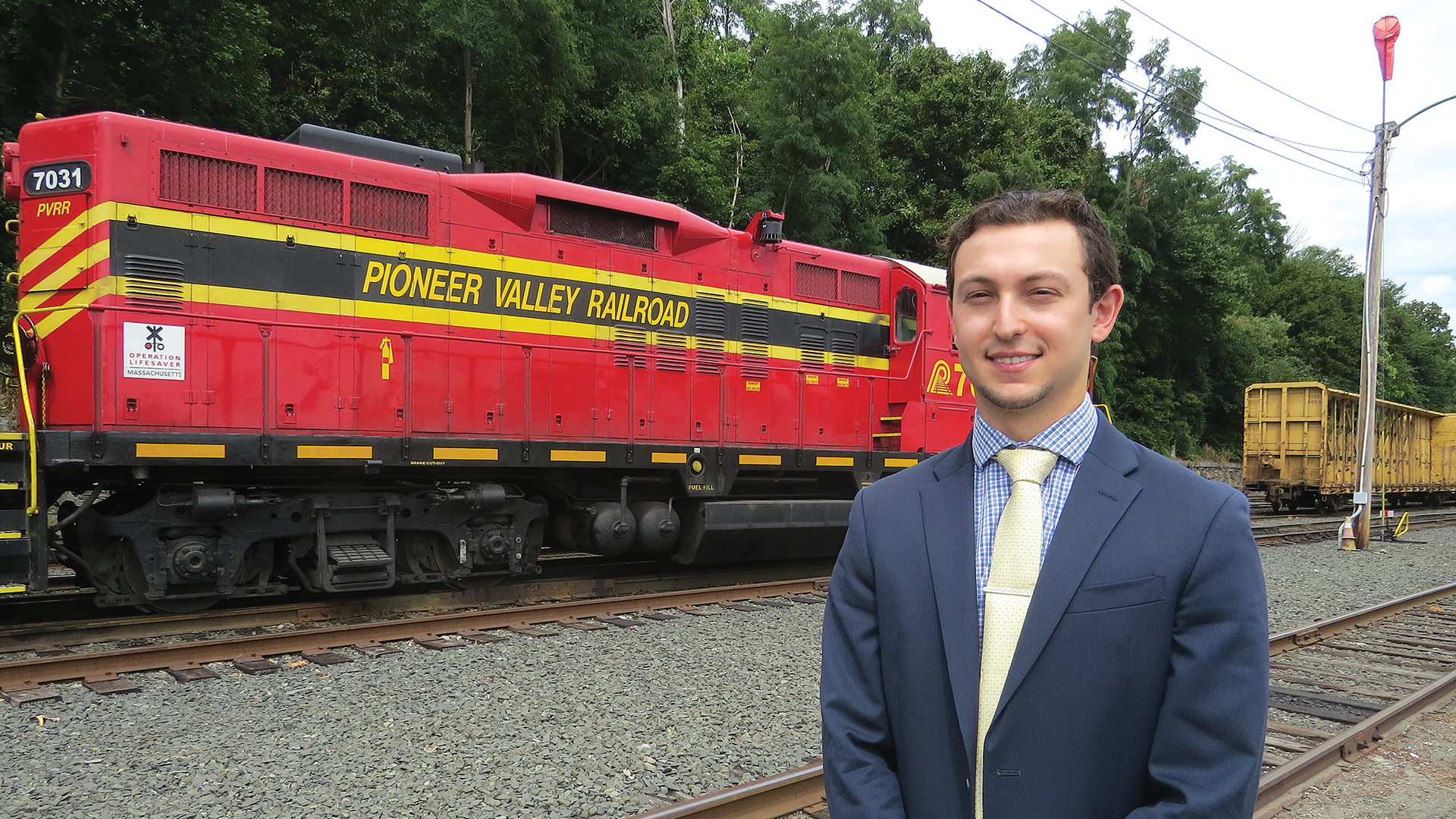 Jeremy Levine says Pioneer Valley Railroad and Railroad Distribution Services have a unique business model that has led to decades of success and steady growth.

When it comes to moving freight, Jeremy Levine says, many business owners believe it comes down to a choice between rail — if it’s available — or trucks.

But in many cases, he believes, the best answer might be rail and trucks.

And this is the answer that has enabled Westfield-based sister businesses Pioneer Valley Railroad (PVRR) and its wholly owned subsidiary Railroad Distribution Services (RDS) — both Pinsly Railroad companies — to thrive for the past 35 years and remain on a steady growth trajectory.

“Railroads and trucking … they have their lobbyists in D.C. on opposite sides of the aisle trying to argue against one another,” said Levine, who is awaiting new business cards that will identify him as the company’s business-development coordinator. “But the truth is, for a short-line railroad like us, we use trucking all the time — we’re sending out hundreds of trucks a year to do the last-mile transit for our customers, either here in Westfield or all across the Northeast.”

As a short-line railroad, PVRR, as it’s known to many in this area, moves on 17 miles of operable track running north from Westfield, said Levine, the fourth-generation administrator of the company started by his great-grandfather, Samuel Pinsly. There is a branch running roughly four miles in Westfield and another branch running 13 miles into Holyoke.

The company interchanges with two class-1 railroads — Norfolk Southern and CSX — and takes freight that last mile, as Levine put it, referring to the last leg of a journey that might begin several states away or even on the other end of the country.

“The number you’ll hear is that four trucks equals one rail car. So if you looking to ship a distance or something that’s very heavy, that’s where we provide economies of scale.”

“If you want to get lumber from Louisiana, a large class-1 railroad such as CSX will bring that up, interchange with us at our yard in Westfield, and we’ll take it the last mile or miles to our customers, if they’re located directly on our line,” he explained, adding that, for customers not on the line — those without a rail siding — RDS will take it the last leg by truck via two warehouses it operates in Westfield.

And in some cases, that last leg might be dozens or even hundreds of miles, he noted, adding that rail is a less expensive, more effective way to move material, and RDS enables customers to take advantage of it, at least for part of the journey.

“The number you’ll hear is that four trucks equals one rail car’s worth of capacity,” he explained. “So if you looking to ship a distance or something that’s very heavy, that’s where we provide economies of scale.”

This has been a successful business model since 1982, and the company continues to look for growth opportunities in this region, he noted, adding that such growth can come organically, from more existing companies using this unique model, or from new companies moving into the region to take advantage of its many amenities — including infrastructure. And Pinsley Railroad owns several tracts of land along its tracks that are suitable for development, he noted.

For this issue and its focus on transportation, BusinessWest takes an in-depth look at PVRR and RDS, and how those letters can add up to growth potential — for the company and the region itself.

Levine told BusinessWest that, while he didn’t work at what he called the “family business” in his youth, he was around it at times, well aware of it, and always intrigued by it.

“When my grandmother was running the business, that’s when they moved the headquarters from Boston to Westfield,” said Levine, who grew up in nearby Granby. “You grow up going to the rail yard, and you’re around these people; you’re definitely going to be inclined to the business.”

But he didn’t take a direct route, as they might say in this industry, to PVRR’s headquarters on Lockhouse Road. Indeed, after graduating from George Washington University in 2015, he stayed in D.C. and worked on Capitol Hill, specifically on transportation policy. He later moved to the private sector and worked at a firm advocating for railroads.

Eventually, he decided he wanted to be a part of the family’s business and relocated to Western Mass. “It’s been quite a ride,” he said while borrowing more language from the industry, noting that he started at PVRR and RDS roughly a year ago.

He came to a company that had a small, steady, and diverse group of rail customers, some that receive thousands of rail cars of material a year and others merely a handful of cars, and more than three dozen RDS customers.

He said his new job description is essentially to generate new business, and he believes there is enormous potential to do just that — again, because of the unique business model these companies have developed and the benefits that rail (or a combination of rail and trucks known as ‘transloading’) brings to potential customers.

As Levine talked about the sister companies and how they operate together, one could hear the drone of forklifts operating in the warehouse outside his office, which led to an explanation of how it all works.

“We have some rail cars here this morning,” he explained. “They got dropped off by CSX late last night; early morning, or 3 a.m. crew [at PVRR] dropped them off here. The crews have been unloading them, staging them, and placing them outbound on trucks to head off to our various customers.”

There are other operations like this, or somewhat like this, in the Northeast, he explained, but what sets this operation apart, beyond the interchange with the two class-1 railroads, is the fact that the company owns both its railroad and distribution services.

“There are companies like our Railroad Distribution Services that are directly on CSX’s line,” he noted. “But the difference there is they don’t control the trains; I can pick up the phone and call the train operator and ask him when he’s going to be here with my rail cars, and with that comes a lot of security that your stuff is not going to backlogged or jammed up and that your deliveries are going to come on time.”

It is this security — and these benefits — that Levine is selling to potential customers. And as he goes about that task, he has the Pinsly team, if you will, focused solely on the Westfield operation and its future. Indeed, the company, which operated short-line railroads in Florida and Arkansas, has divested itself of those operations, with PVRR and RDS being the only holdings in the portfolio.

“What that has allowed us to do is reinvest and recalibrate,” he explained. “We had a very large team throughout the years and a lot of focus on Florida, where we had 250 miles of track; we can now take that talent and focus on our operations here.

“My go-to line is that ‘even you don’t have rail siding, that doesn’t mean you can’t benefit from railroading,’” he continued, adding that he can back up those words with numbers, and he intends to use them to build the company’s portfolio of customers.

PVRR owns a 1930s-era passenger rail car that it calls the ‘dinner train.’ As that name suggests, it’s used for fundraising events, a customer-appreciation gathering, and even as a means to transport Santa Claus to Holyoke Heritage State Park for annual festivities there.

It hasn’t been out of the yard much in the era of COVID-19, but U.S. Rep. Richard Neal recently used it as a backdrop for an event, said Levine, adding that the dinner train has become a highly visible part of this company for decades now.

But the bottom line — in virtually every respect — is that PVRR and RDS are about getting freight, not people, from one place to another.

It’s a moving story, and one that could well add a number of new chapters in the years to come as the company tries to get customers on the right track when it comes to freight — literally and figuratively.