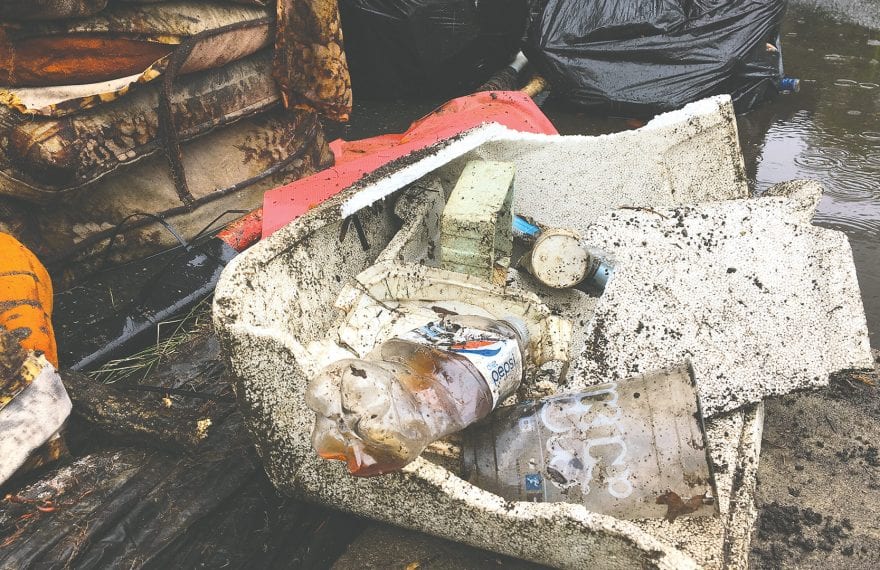 A Change at the Checkout 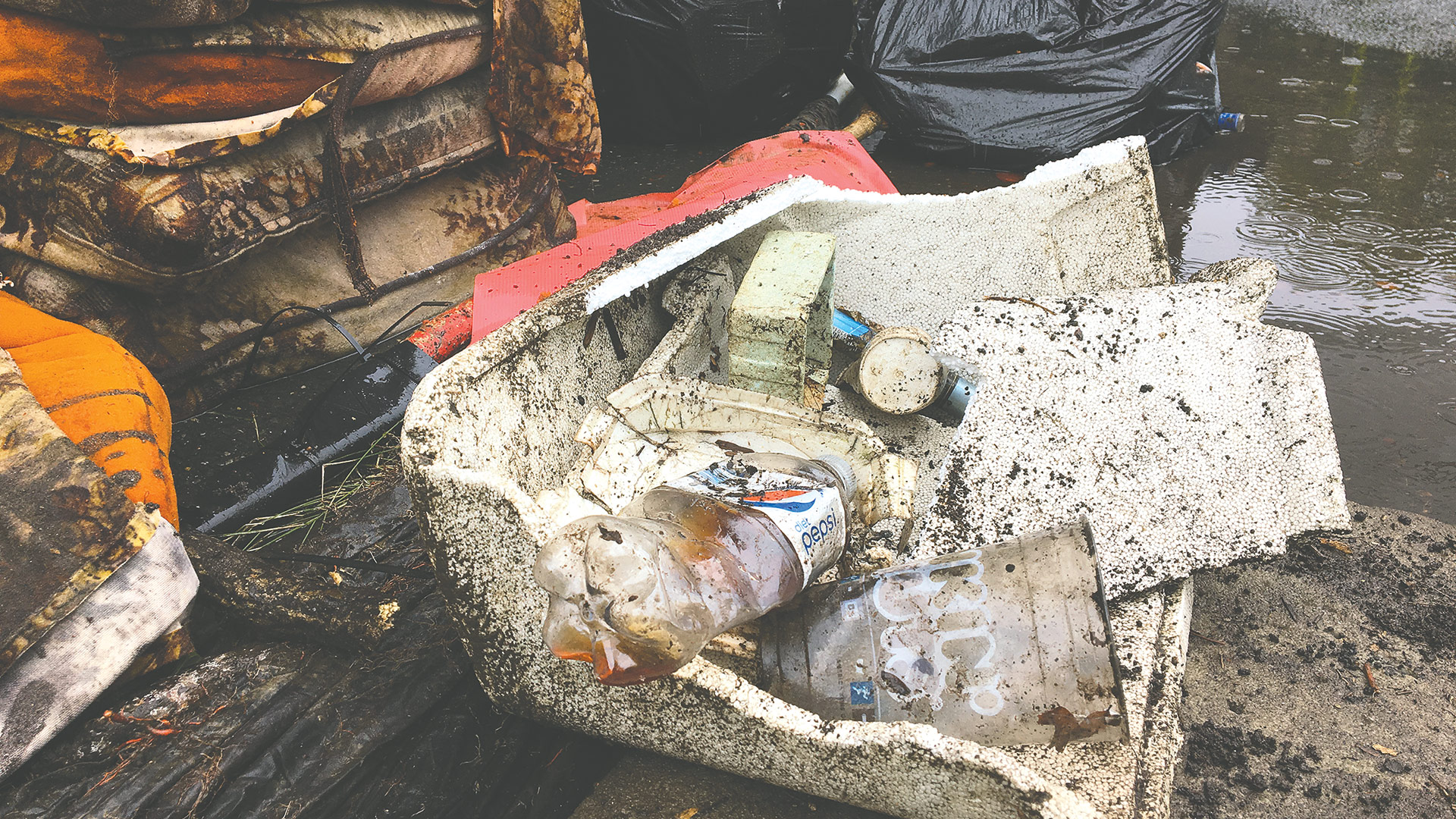 Volunteers at the annual Source to Sea Cleanup always seem to pick up the same amount of plastic waste, meaning something has to change further up the chain.

Americans need to start talking about plastic waste, Bob Bolduc said. For proof, look no further than the customer who visits Pride Stores regularly for lottery tickets — and wants them in a plastic bag.

“What does that tell you and me? That the world has a big education problem. We need to talk about it.”

Bolduc, who owns the Pride chain, and his team have done just that, deciding to eliminate plastic bags at checkout counters across the chain. The ban went into effect on May 1.

“We’re happy to do it,” he went on. “We’re getting mixed reviews, but we think people in time will come around. Everyone’s got to do their share. This is a little thing we should have done a long time ago.”

As part of the conversion, Pride will give away reusable bags as long as supplies last, and give a 5-cent discount whenever a reusable bag of any kind is used.

“It was the right thing to do; it’s that simple,” Bolduc said. “Anybody who cares about our planet realizes it’s one of the easy fixes, so we decided to do it right away. There have been a few customers who complained, but most customers have been understanding, some have applauded us, and some — here’s the good news — said, ‘I don’t need a bag at all.’ That’s the best response, because paper bags aren’t the solution, either.”

Pride isn’t alone. Big Y Foods recently announced it will eliminate single-use plastic bags from checkouts at its 70 supermarkets and specialty stores, along with its Big Y Express gas and convenience locations, in 2020.

“We’re getting mixed reviews, but we think people in time will come around. Everyone’s got to do their share. This is a little thing we should have done a long time ago.”

Big Y supermarkets in six area communities — Adams, Amherst, Great Barrington, Lee, Northampton, and South Hadley — have already made the switch to comply with municipal bag bans, and that got the company, which has implemented a number of sustainability-minded practices over the years, thinking.

“We have a handful of stores that are in towns with bag bans, which makes it a hodgepodge for us,” said Claire D’Amour-Daley, Big Y’s vice president of Corporate Communications. “The first stores were tougher — people got mad at us. But it’s much more commonplace now, with these town ordinances. Most people support it, and the employees support it.”

Eliminating the single-use bags chain-wide, she added, simply made sense.

“It’s a start. We continue to look at all types of packaging we can substitute — we’re looking at alternative sources of everything — but we figured we’d start with the bags.”

As one might imagine, plastic bags create an inordinate amount of waste. According to the Environmental Protection Agency, more than 380 billion plastic bags are used in the U.S. each year. If not disposed of properly, this plastic can end up in waterways and forests, where it can harm fish, marine animals, birds, and other wildlife.

As a large chain, Big Y uses 100 million plastic bags and 3.5 million paper bags at its checkouts each year. The company recognizes that paper isn’t the answer to this waste problem, as the paper-production process is harmful to the environment, causing increased greenhouse-gas emissions and deforestation, which is why it’s promoting the adoption of reusable bags through in-store promotions (like buy one bag, get one free) and signage. 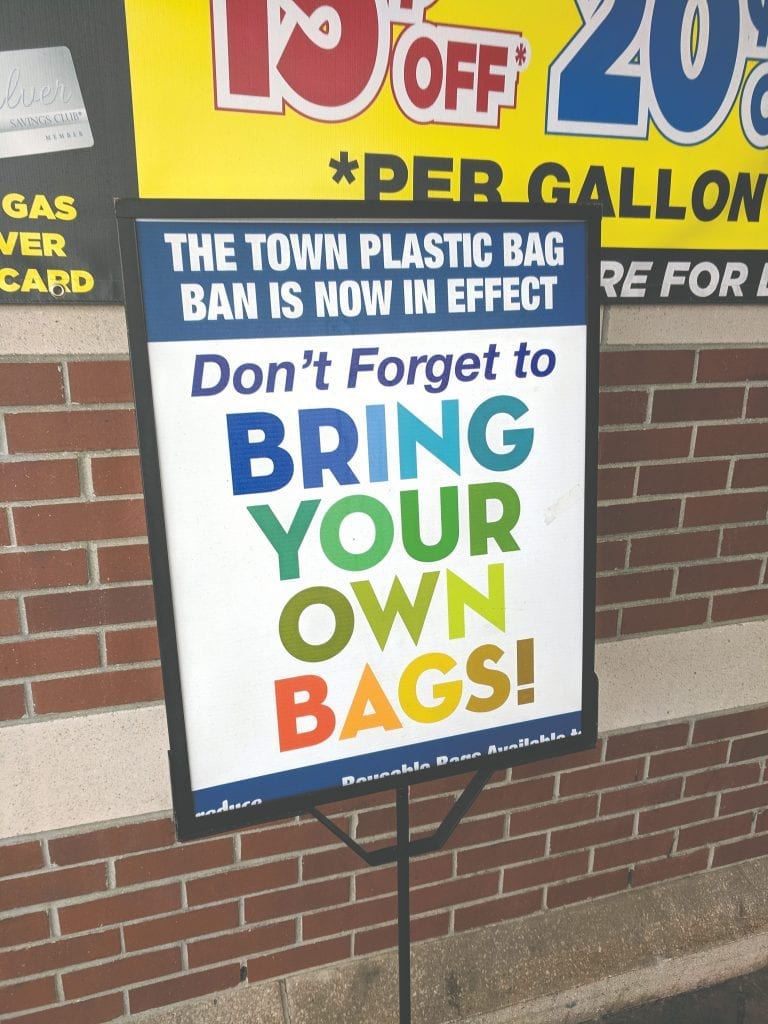 Signage at the South Hadley Big Y reminds shoppers they won’t be getting plastic bags there.

The Connecticut River Conservancy understands the impact of waste more than most. CRC volunteers have cleaned up more than 1,000 tons of trash over the course of 22 years at its annual Source to Sea Cleanup.

“It’s clear that repeated cleaning is not the solution to our trash problem,” said Andrew Fisk, executive director. “We need to redesign our economy so there isn’t waste in the first place.”

The CRC is taking a three-pronged approach to that campaign: corporate pressure, consumer pressure, and legislative efforts.

“We realize, by going out and cleaning it up, how big it is, but we’re still doing the same work year after year,” said Angela Chaffee, communications director.

“There are things that can be done to stop trash from ending up in riverbanks in the first place. That’s what we want to start working toward,” she went on. “Littering is definitely part of the problem, and we encourage people not to be litterbugs. But there are choices people can be making every day at the consumer level — things like reusable bottles, shopping bags, and coffee mugs. A lot of people think that doesn’t make a difference, but it absolutely does.”

On the subject of corporate pressure, she mentioned Dunkin’ Donuts as an example of a company that needs to do more — as evidenced by the countless plastic DD cups that get picked up at every cleanup.

“We see those all the time; they tend to gather in parking lots and storm drains on the street, which directly connect to our rivers. We got to thinking, why are these businesses making things that end up as trash in the rivers? They say, ‘it’s not us, it’s our consumers’ — but why not give your consumers better options? Dunkin’ does have a reusable mug program, and they could be incentivizing that a whole lot more.”

The goal isn’t to burden companies, Chaffee said, but to sit down at the table with them to formulate strategies for reducing waste. If that doesn’t work, she encourages consumers to speak up with their money.

“They can say, ‘hey, I’m a customer, and I love your coffee, and I want you to do it this way, not that way.’ That has been downplayed a little bit. The power of that dollar is more than people think. The public has a role and a voice.”

The third step is working with legislators to craft laws, like plastic-bag bans. “We support any municipality that wants to pass a ban because it does contribute,” she said. “But we feel the best way to solve the problem is a statewide ban, not different rules depending on what town you’re in.”

Northampton was among the early adopters of a plastic-bag ban about five years ago. Mayor David Narkewicz recalled that some shop owners were concerned about the impact on their business, that it might put the city at a competitive disadvantage. But they were given plenty of transition time, and the fears turned out to be unfounded.

“I don’t think anyone has been able to say it had an impact,” he told BusinessWest. “Stop & Shop totally ran with it. They switched without any issues — Walmart, too. And Big Y is voluntarily getting rid of plastic bags in all their stores. So I think we were ahead of the curve.”

He noted that entire states — California, Hawaii, and New York — have banned single-use plastic bags without much pushback from customers. “I think it’s part of the environmental ethic we have here in Northampton. On so many levels, it made sense to people here.”

Terry Masterson, the city’s Economic Development director, agreed. “My job for a while was to deal with businesses that didn’t comply — and we had one. Customers want to see it, and store owners want to provide it.”

D’Amour-Daley agreed that banning plastic is a positive step customers will adjust to — hopefully by embracing reusable bags, not relying on the paper bags available at checkout for 10 cents a pop. “California has had a ban for years. People get used to it once you put a line in the sand.”

Big Y has a history of promoting sustainability, she noted, including almost daily donations of unsold food to the five food banks within its marketing area. Last year, the company distributed 6.4 million pounds of food, including 2.4 million pounds of meat and 1.4 million pounds of produce. Big Y locations also participate in paper and cardboard recycling programs and composts 2,500 tons of food annually. In addition, it has championed other energy-saving initiatives, such as the use of solar arrays, LED lighting, and reclamation of heat from refrigeration systems to heat the stores during the winter.

“We continue to look for other types of packaging that are better for the environment,” she added. “People expect that now, and we recognize we have more work to do.”

Bolduc noted that Pride looks for ways to be more environmentally progressive as well, including charging stations for electric vehicles at new stores; the use of high-efficiency refrigeration, heating, and air conditioning in all stores; conversion of all hand dryers to cold air only; and climate-controlled stores for optimum energy reduction.

The bag ban, he said, was a comparatively simple step, and one that raises awareness of sustainable practices among customers. After all, he added, “we’re all in this together.”

Chaffee welcomes such moves. “The fact that we’re having this conversation at all is a good step forward,” she told BusinessWest. “Every little bit helps move us in the right direction. We want companies to step up and do more.”

As for individual consumers, “a lot of times, people think just one person won’t make a difference,” she added. “But you don’t have to do everything 100% perfectly. If you’re doing one small thing to make a difference, think about the millions of people across the country and around the world; it does add up and has a huge, positive impact.”