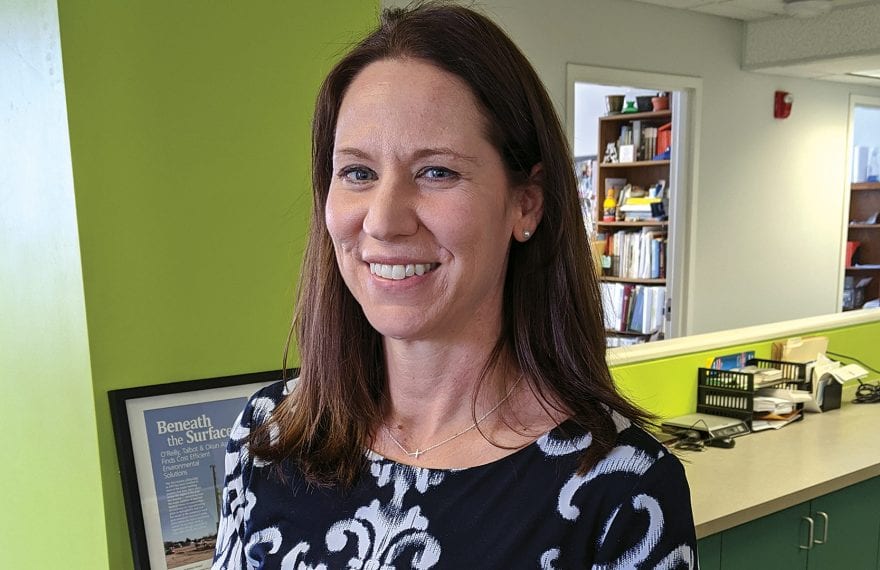 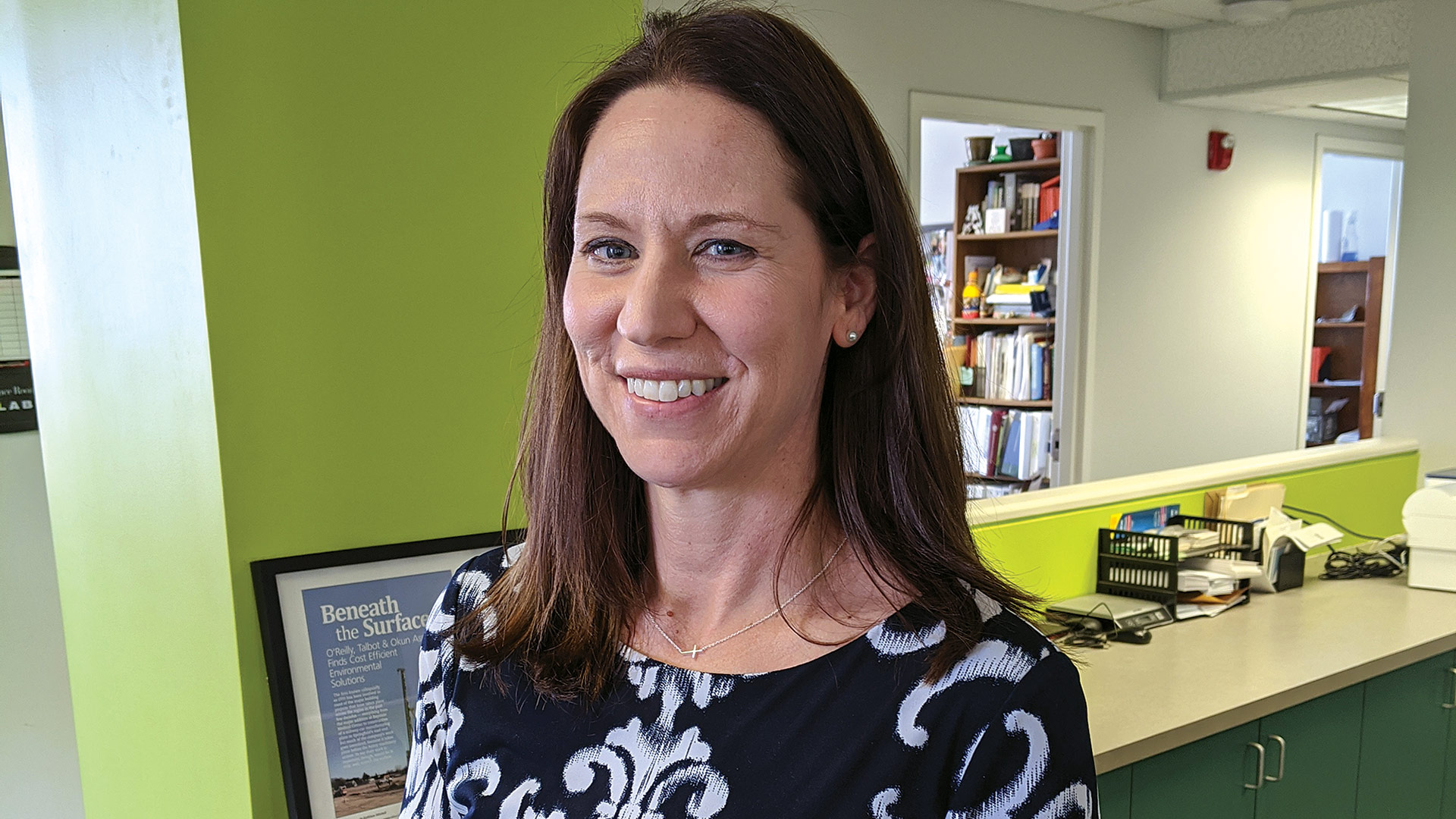 As recently as last year, Ashley Sullivan didn’t expect to one day sit in the president’s chair at O’Reilly, Talbot & Okun — but that was OK, since she enjoyed her job so much. Now, as the firm’s leader, she gets to emphasize and expand on what she likes, including a culture of mentorship and growth that encourages employees to continually learn and pursue more responsibility, all in service to clients with ever-changing needs.

There was a time last year, Ashley Sullivan said, when the principals at O’Reilly, Talbot & Okun (OTO) weren’t sure how the company’s succession plan would proceed, or who would be its next leader. But they knew they had to talk about it.

“So many other companies are at the same age, where the leaders are getting ready to retire, so what now?” said Sullivan, who was named president of the 26-year-old geoenvironmental engineering firm in January. “I kept hearing maybe they’d look for an outside buyer, and I think it was just put off, put off, put off, because they were having fun doing what they were doing.”

But the conversation had to proceed, she went on. Of the three founders, Jim Okun works part-time, Kevin O’Reilly plans to cut back as well. While Mike Talbot plans to be around full-time for awhile, the firm needed direction for the future.

“They didn’t want to close the doors. We have a great company and a great staff,” Sullivan told BusinessWest. “So I think people at different stages, so it was maybe people wanted different things, and it was just put off.”

When the conversation got serious, the solution, they found, was right in front of them.

“I’ve learned through this process, and talking to other companies going through it, that it’s not an easy thing to transition from the founders to a generational company. Once you get past that, it gets a little easier.”

“I’ve learned through this process, and talking to other companies going through it, that it’s not an easy thing to transition from the founders to a generational company,” she said. “Once you get past that, it gets a little easier. So it was just something we had to work through and negotiate through. The choice ended up being, can we transition internally? Can we make this work? Do we have the people to make this work? And we just fought like hell to make that work.”

The transition has been well-received, said Sullivan, who came on board at OTO 20 years ago. Since then, she has been instrumental in growing and developing business in the geotechnical and construction services of the company. She has also been a key mentor to junior staff and an advisor to upper management, as well as an influencer on the firm’s marketing, work culture, and business development (more on all of that later). 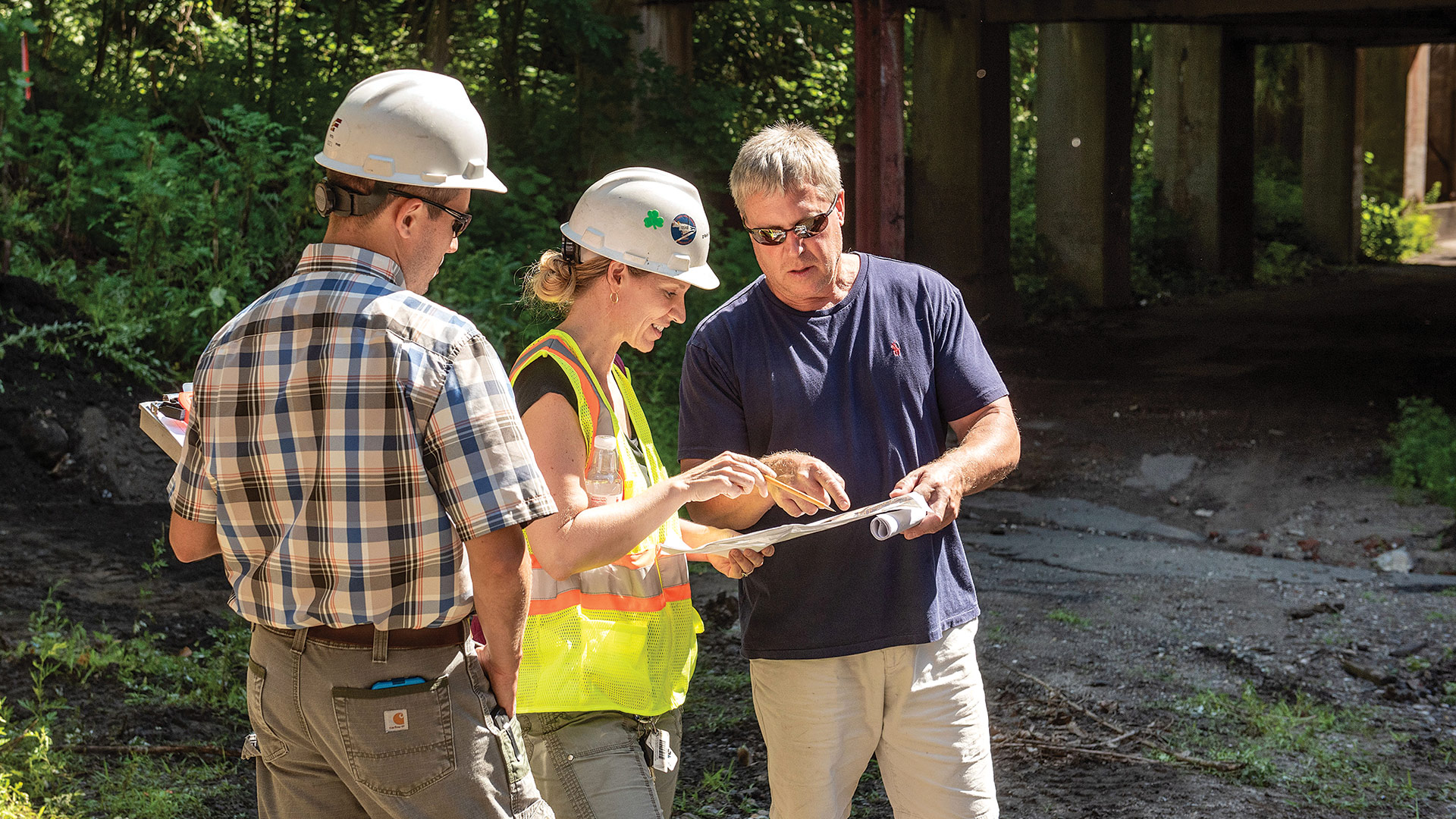 “The energy here is fantastic. Last year was tough — when you’re working on any sort of change, it’s hard because everybody’s a little nervous: ‘what does this mean for me?’ And sometimes you lose focus on the overall goal,” she explained. “We have the clients, we have the work. We just had to figure out how to keep it going. So last year there was a little uncertainty and fear, for lack of a better word. This year, once the paperwork was done, the energy is through the roof.”

It was during a time when she was working fewer hours that Sullivan came to understand and appreciate her workplace and its culture.

“They allowed me to have a flexible schedule when I had children, and it was something you didn’t see a lot at that time,” she said, noting that she cut back to 24 hours in 2005, sometimes more if she was needed, and was still working 32 hours not too long ago. Not surprisingly, she’s a strong advocate of work-life balance.

“I was still allowed to progress and advance my career in that way, and now I can say that it works. You can let people have a balance of where they want to be home. I wanted to get my kids on and off the bus, but I wanted to have a meaningful career too, and I found that difficult at 40 hours. So it’s something that I strongly feel works, and I want to continue to develop that culture here.”

Sullivan also instructs the civil engineering capstone design course at Western New England University. In this role, she guides graduating students through a mock building project where many of her peers join her in presenting practical technical knowledge, writing skills, and soft-skills training.

Teaching also requires her to constantly learn more, she added. “Plus I was doing something I loved, working with students. The energy in a classroom … it just re-energizes me. Mike Talbot is now teaching a class because we see the benefit to being in community. I’ve hired a couple of my students — I have an intern from there now. It’s a great feed to get great engineers. It’s been so helpful in ways I never thought it would be.”

Sullivan enjoys being a mentor in other ways as well, including for young engineers at work.

“I love to build confidence in people,” she said. “I was a very shy kid, and I think engineering, amazingly, somehow gave me confidence in school, and that’s what I like to do for other people. I like to encourage them or say, ‘you can do more than this,’ or ‘here are some habits that will help you,’ and you see them just soar.

“There are so many amazing people here,” she said, and she strives to encourage them. “‘You got this.’ ‘You can do this.’ ‘Go to that meeting; you’re going to kill it.’ What can we do to help you?’ That’s what really gets me excited in the morning, helping people and seeing them achieve — and seeing how it builds on itself and builds on itself.”

But encouragement comes not just in words, but in opportunities. She cited the example of Christine Arruda, who started with the company in an administrative role, then took classes in drafting and computer-aided design, and now manages much of the firm’s industrial-hygiene work as a technical specialist. 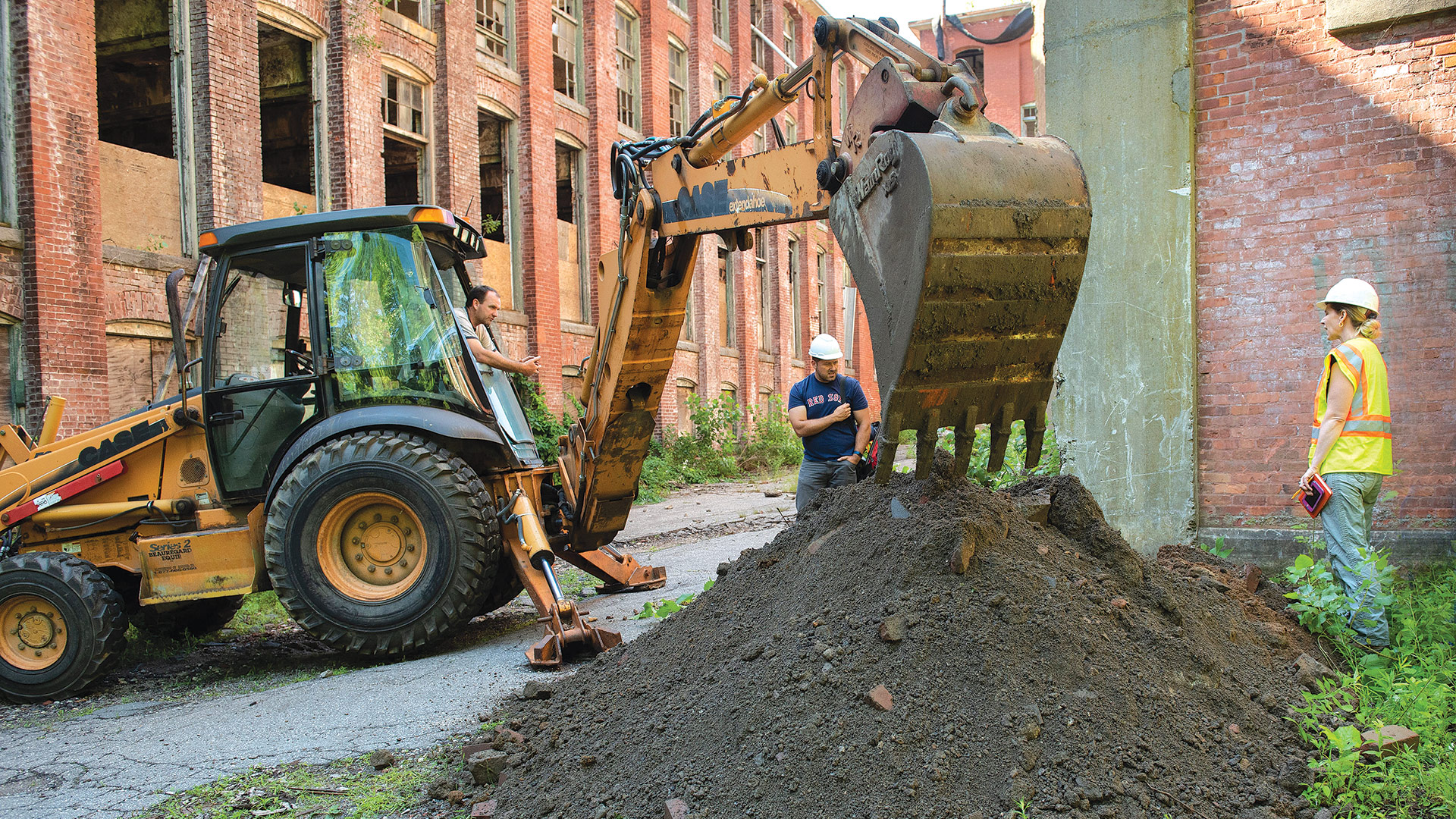 Ashley Sullivan observes soil-investigation and foundation work at the One Ferry Street project.

“It’s not uncommon here for people to come in and try different things. We have a culture of, ‘do you want to try to do that? Let’s do it.’ It’s a growth mindset, and I want that to continue and explode,” she said. “What do people want to do? What are some of their goals? Let’s get people into the roles they enjoy and then support them in whatever ways they can be supported. You get people doing the things they really enjoy.”

Much of the company’s evolution over the year has been tied to industry trends and the shifting needs of clients, and this focus on continuing learning serves that growth well, she said, again citing Arruda’s interest in radon, which is something schools have been concerned about in their buildings.

“Our big thing is, how can we provide value for a project?” she said. “There are only so many clients in this area. To be successful, we have to continually adapt to what clients’ needs are. So we’re always adapting and growing, and I think people who work here like that.”

Changing with the Times

Change — and taking advantage of opportunities — have been constant since the early days of O’Reilly, Talbot & Okun. Before the three founders launched their venture in 1994, they were working together at an environmental-services firm in Connecticut.

The Bay State had just developed the Massachusetts Contingency Plan, a law that tells people how to go about cleaning up spills of hazardous materials. As that program rolled out, the three saw an emerging need for people with their skills. So they started a company.

Over the years, OTO’s services have included testing commercial properties for hazardous materials and overseeing cleanup, asbestos management in schools and offices, brownfield redevelopment, indoor air-quality assessments, and geotechnical engineering, which may involve helping developers assess how much force and weight the ground under a proposed structure can stand, or determining the strength of an existing building’s foundation and surrounding topography.

“The big cleanups mostly are done, but you still have things that were left in the ground because they said it’s OK to leave them in the ground, but if you’re going to redig or redevelop that site, you need to manage it,” she explained, noting that it’s tougher these days to find untouched land to develop in Massachusetts, Connecticut, and Rhode Island, so geotech services on redevelopment projects are becoming more important. “We shift to what our clients need.”

The end result is often satisfying, especially when a vacant eyesore, like the old mills in Holyoke and Easthampton, come to live.

“Those are some of our favorite projects, because whenever we see a property get redeveloped and reused and come back to life, that just benefits the neighborhood, the community, and us. Those are great projects.”

Suffice to say, Sullivan loves her job on a number of levels, and wants her employees to feel the same way, which is why she keeps raising the bar when it comes to culture, mentorship, and growth.

“We’re not afraid to ask for help,” she told BusinessWest, explaining that she brought in a leadership group — the Boulder Co., based in Connecticut — to cultivate soft skills and leadership training.

“We had a retreat, and it was absolutely amazing. It’s really giving people skills like emotional intelligence and how to get over fears of speaking in public and how to work together better. It’s led to a big energy change here, and you’re seeing people step out of their shells and believe they can do more,” she explained. “We always know we need to be technically proficient and get that training, but sometimes, as engineers and scientists, we forget about the other half — that all our work is based on relationships, and if we continually work on that, we’ll do well.”

“My goal right now is to be one of the best places in Springfield to work because I think that’s how you attract the best people,” she said. “One of the reasons I stayed here was because I was able to do these things.”