Deerfield Marks 350 Years as a Destination 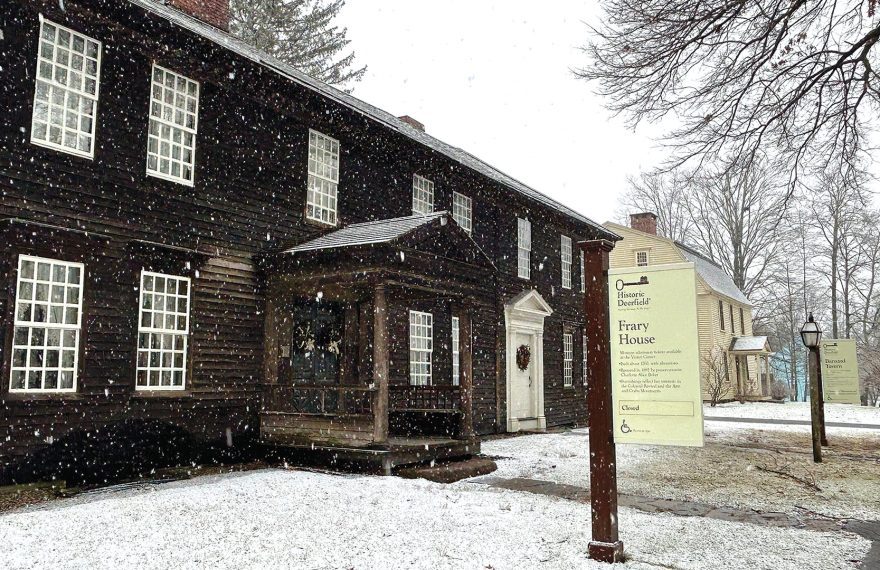 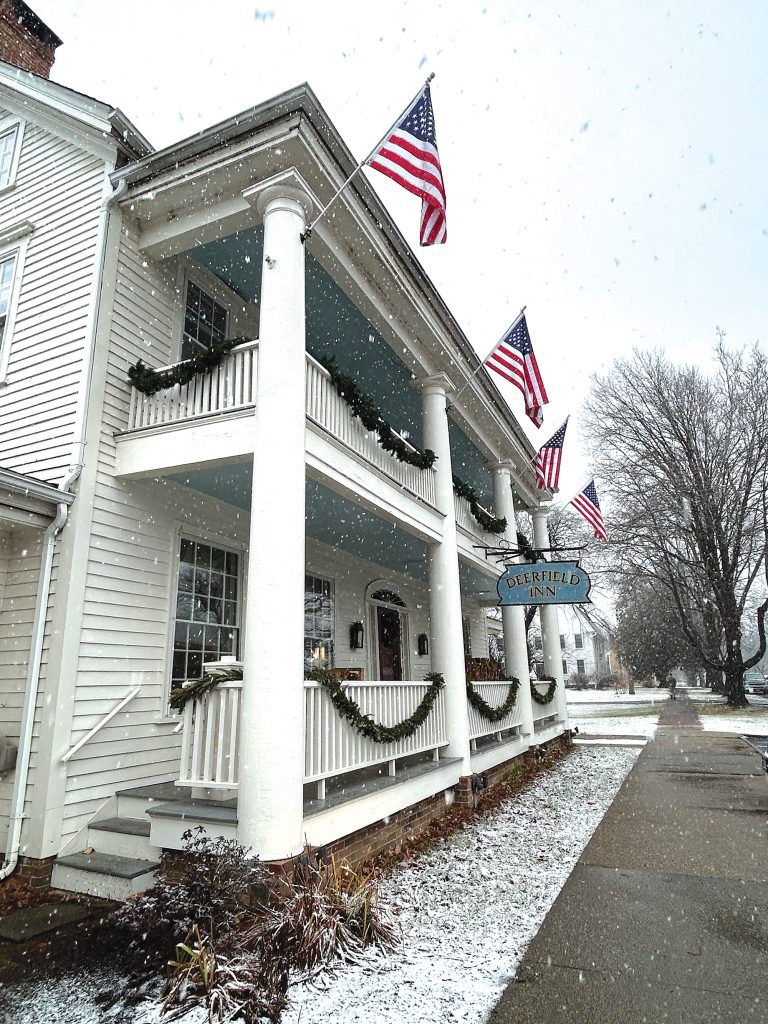 The Deerfield Inn was built in 1884 and is still in use.

This year, the town of Deerfield, though incorporated in 1677, will mark its 350th anniversary since the first English settlers called the upper Pioneer Valley their home in 1673. Since the beginning, a lot has changed, but the town has tried to keep some aspects the same.

“It was a farming community,” Town Administrator Kayce Warren said. “If you’re going to Historic Deerfield, you’re going to see a lot of agricultural land. Most of it is preserved; most of it is still used for agricultural purposes. That was an element for many, many years that probably goes back to incorporating the town because of where we are; we had a great ability to grow things.”

Jessye Deane, executive director of the Franklin County Chamber of Commerce, said the town, while maintaining that agricultural focus, has also become a true tourist destination. In fact, tourism contributes about $79 million to Franklin County’s economy, and Deerfield is one of the driving forces behind those numbers.

“We’re seeing just about 27,000 visitors to Yankee Candle each year, and Historic Deerfield has just under 14,000,” Deane told BusinessWest. “These are people that are driving more than 50 miles to reach these destinations. In a lot of cases, these people are staying over at Champney’s and the Deerfield Inn. They’re taking in the sights, and they’re hopefully enjoying all of what Franklin County has to offer.”

Historic Deerfield — an open-air destination that boasts a history museum, an art museum, and several historic house museums, as well as the Deerfield Inn and its historic restaurant, Champney’s — certainly reflects those roots. As one of the best-preserved collections of original historic houses in New England, Old Main Street, or simply “the Street,” as Historic Deerfield President John Davis called it, is lined with 40 houses that predate the Civil War.

As a frontier settlement, Deerfield regularly suffered from attack. The village was abandoned during King Philip’s War after the 1675 attack at Bloody Brook and resettled in 1682, only to face several more raids in the 1690s and into the early 1700s.

Today, the 18th- and 19th-century houses of the village center, many on their original sites and filled with antique furnishings, reveal the lifestyles of Deerfielders from the time of the first English settlement to the Arts and Crafts movement in the early 20th century. The village has been on the National Register of Historic Landmarks since 1962.

“You get an amazing look at how the Puritans designed their towns and those houses along the street; 12 of them are museum houses that our visitors can go into,” Davis said.

Over the past year, Historic Deerfield has “really emerged from the pandemic” and is close to being back to where it used to be, recording its second-best month in its existing 75 years this past October, he added.

Because it was already engaged in virtual programming, he explained, the museums were able to hit the ground running faster than some of the larger museums when it came to using Zoom for digital content — and they’re continuing to do so. And when restrictions were lifted, the houses reopened for people to come see the 32,000-piece collection and the 12 homes open to tour.

“Being able to bring all of those back has really encouraged folks to visit us again in person, and there are a number of seasonal educational programs that are also big drivers for us,” Davis said. “One of the most popular of those is our open-hearth cooking program where you can actually see a meal being prepared in the old-fashioned way, over an open fire, and it’s not an experience that you can get in many other places.”

“You get an amazing look at how the Puritans designed their towns and those houses along the street; 12 of them are museum houses that our visitors can go into.” 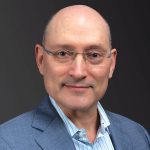 Another program that brings locals and visitors as far as Boston and New York City to ‘the Street’ is the Sheep on the Street program in May, which attracts hundreds of people to look at the historic trades associated with wool. Flocks of heritage-breed sheep walk the streets like they would have in the 18th and 19th centuries, and visitors enjoy sheepdog and shearing demonstrations as well.

Davis said that the town and Historic Deerfield have a close relationship and like to function as “the town’s museum,” with Deerfield residents getting into the sites for free. But he wants to rekindle the museum’s relationships with schools, not only in the surrounding areas, but as far south as Springfield and Holyoke. Schools stopped having field trips because of COVID, and now that they’ve returned, he wants to make welcoming students a bigger priority in 2023. 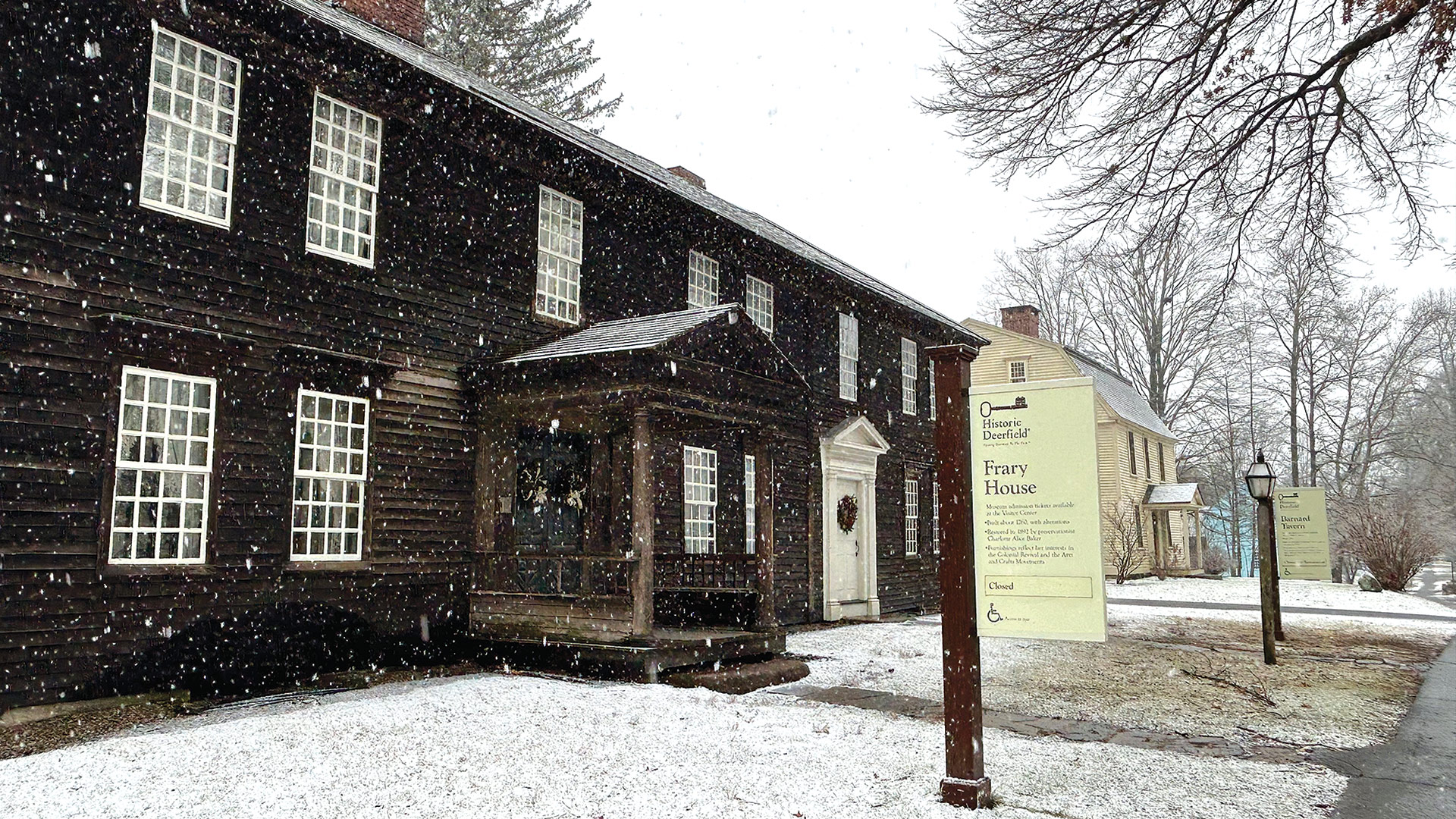 “Western Massachusetts is a fascinating region, both for its history and its contemporary beauty,” he noted. “And this is one of the most magical places — this mile street that you can turn off of Route 5, and it’s like you’re going into a different century. I think that that is a part of the story of our region here in Western Mass. that is really interesting to folks who may not otherwise think of this as a destination area.”

One of the more recent and frequently visited attractions is Tree House Brewing Company. Originally established in Brimfield, the brewing company now occupies the old Channing Bete headquarters on Route 5 and is celebrating its one-year anniversary in town.

Warren added that the taproom at Tree House Brewing Company is “really fun,” and several of her colleagues meet there to socialize and catch up after work.

“Tree House has really good beer, and they have really good pizza. You can bring your own food in, but once again, it’s nice to have options, so it’s not just Yankee Candle,” said Denise Mason, chair of the town’s Connecting Community Initiative. “We have Tree House, which is an anchor, and we have everything else — we want to connect all of it to give people choices.”

She went on to say that Yankee Candle offers pizza, but if someone wants another food option, they don’t always know what’s available in Deerfield. To create opportunities for diners and restaurant owners alike means making the town more accessible.

Warren added that the piece that really leads to economic development is getting people off the highway into the town center so they can shop, eat, get their hair done, and engage with the many wellness-focused enterprises. “We want to be able to get people back and get people into the center of town.”

Moving forward, Deerfield officials hope to improve the municipal parking lot, known as the Leary Lot, to create a more direct pathway to the main streets in the center of town. Berkshire Brewing Company wants to expand, “and that’s a good place for them to do it because there is parking and accessibility right next to the lot,” Warren noted. “But there’s also this concept of creating small spaces for people to eat, to gather, that are pretty and accessible and inviting.”

Fixing up the Leary Lot helps businesses around the center because it gives them some parking access and resources to other parts of town. With four other restaurants on Elm Street and another restaurant, Wolfie’s, on South Main Street, parking in the center of town is a massive need.

“If there’s no parking, people won’t shop or stop, especially older individuals,” Mason said. “If they don’t have easy parking, they just go somewhere else.”

The goal, of course, is to keep them in Deerfield, a town that has seen plenty of change over the course of 350 years and is looking toward a positive future while celebrating its rich past.