Northampton-based Builders Make a Living on the Cutting Edge 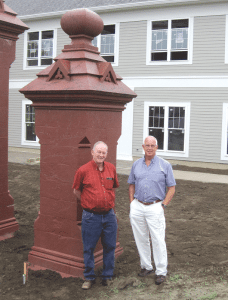 Mark Ledwell, left, and Jonathan Wright stand next to the remains of the entrance pillars to the former Northampton State Hospital, where the Village Hill mixed-use complex is taking shape.

It’s called the “home of the future” by its designer, Bruce Coldham of Coldham & Hartman Architests in Amherst, but it’s being lived in today.
This would be the 2,700-square-foot structure in Hadley that was honored by GreenBuilder magazine with one of its ‘Home of the Year’ awards in 2011, the only house in the Northeast to be so recognized. There are many numbers associated with this dwelling — and that prestigious award — but the most significant is 33, or minus 33, to be more precise.
That’s what the house earned for a Home Energy Rating, or HERS, which means that it produced 33% more energy than it consumed for the previous year, said Jonathan Wright, founder and president of Northampton-based Wright Builders, which constructed the home.
“Through an extremely well-designed plan, a very tight building envelope, and PV [photovoltaic] panels, we went way past zero,” said Wright, referring to the term ‘net zero’ — a benchmark used to describe structures that don’t consume more energy than they create — and putting heavy emphasis on the word ‘way.’
The GreenBuilder award judges were suitably impressed, noting that “this home’s building science is well ahead of the curve.”
That term is one increasingly used in association with projects undertaken by Wright, a nearly 40-year-old company that specializes in residential, commercial, and institutional building, and has a hard-earned reputation for being on the cutting edge of new building processes and techniques, especially with regard to energy consumption and conservation.
“Before these certifications were around, we just considered it smart building,” said Mark Ledwell, Wright’s long-time partner and the company’s co-principal, referring to LEED (Leadership in Energy and Environmental Design) and other building benchmarks used today. “We’ve tried to keep abreast of the materials and new technologies and stay on the cutting edge; we want to make buildings that last.”
This philosophy has guided the company through every project in a broad portfolio that includes everything from a host of buildings at Smith College (one of the firm’s many clients in the education sector) to several components of the multi-faceted initiative taking shape on the grounds of the former Northampton State Hospital.
For this issue and its focus on construction, BusinessWest talked with Wright and Ledwell about the business they’ve built, the philosophies that shape it, and where they want to take in the future, which, in many respects, as mentioned earlier, is already here.

Framework for Success
Wright was a member of the first graduating class at Hampshire College in 1970. He liked to write and was contemplating careers involving that skill, but a number of summers spent doing carpentry work eventually took him down a much different path.
“It was supposed to be a pause on the way to some other career that never happened,” he told BusinessWest, “because this one [building] got really interesting really quickly.”
Indeed, soon after graduating from Hampshire with a liberal arts degree, he started Wright Builders and, soon thereafter, another, somewhat related venture called Wright Architectural Millwork, also in Northampton, which created custom wood interiors for offices and private residences.
While he operated them both successfully, Wright eventually realized that he needed to focus his time and energy on one or the other, and in 1994 he sold the millwork operation to employees Walt Price and Mike Buell and concentrated solely on Wright Builders. 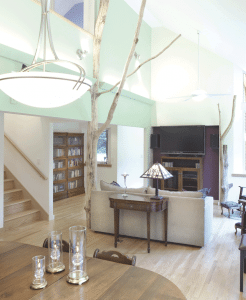 The award-winning Cave family home in Hadley was designed by Coldham & Hartman Architects of Amherst and built by Wright Builders.

And he was joined in that venture a few years later by Ledwell, who had started his own company, Ledwell Woodworking and Building, in 1985, but 15 years later was ready for a change and a new challenge.
“I was getting a little tired of pushing my own rock up the hill,” said Ledwell, who was looking for high-quality product output in a larger establishment — and found that all that at Wright Builders.
The two have been partners since 2007, and they’ve established the company as an innovator, not only in building techniques, but in operating philosophy and policies for its 28 employees.
For example, Wright was one of the first builders to offer health insurance in 1976, and later added maternity leave for both men and women. Today, employees are allowed a week’s vacation in the summer, a rare perk in an industry that must make the most of this region’s comparatively short building season.
“Part of our job as leaders is to see not only where we’re going, but where we want the business to go and where the people who are crucial to our business are going with their careers,” said Wright.
But that term ‘innovator’ is most often used in reference to the company’s leading-edge work in building strategies and processes, especially with regard to the environment.
And this is hardly a recent phenomenon.

LEED by Design
When Wright started out in the ’70s, he was already working on passive solar homes, and was recognized by then Gov. Michael Dukakis in the area of energy efficiency and high-performance building. While the science and technology of the emerging green-building trend has been a consistent theme for the company, the world has in some ways caught up with Wright Builders, which is nonetheless commited to staying ahead.
“We’re really able to focus on building the best-performing and most environmentally friendly buildings that we possibly can,” said Wright, adding that this mentality crosses into all aspects of the company’s work, from residential to institutional.
Ledwell concurred.
“Water is the enemy in our business, and today our homes are tighter, healthier, and more comfortable, and use a lot less energy,” he said, “which is easier on our customers’ pocketbooks and good for the overall health of the environment.”
Referencing their broad portfolio, Wright and Ledwell said their projects fall into three main categories: personal, institutional, and what they call ‘performance.’
In the personal category, especially with Wright’s and Ledwell’s carpentry background, are projects that allow them to get involved with an individual’s or organization’s creative process.
Wright said that perhaps the most gratifying example of such work was a recent project for New York Times bestseller and Emmy Award-winning children’s-book author Mo Willem, who penned Don’t Let the Pigeon Drive the Bus! and the Knuffle Bunny books. He needed a complete renovation and a writing studio created in his roughly century-old Northampton home, and commissioned Wright to handle the work.
In the institutional realm, the company has carved out an effective niche, handling work for a number of area schools. Wright said the work is rewarding and uniquely challenging because the buildings stand for decades and often become symbols of the institutions in question.
“You’ve got to do a good job there because that building’s going to be in service for the next 30 or 40 years,” said Wright, noting that some on the campus of Smith College joke with Wright and Ledwell, calling the main gate of the college ‘Wright’s Corner,’ because three of the four corners are Wright Builders projects.
Meanwhile, the partners consider the performance category to be the most intriguing in many respects, because it’s based on the technology that is enabling them to build amazingly sustainable buildings.
The aforementioned home in Hadley falls into this group, said Wright, noting that GreenBuilder selected 10 outstanding projects displaying the best and most cutting-edge green residential building.
Wright and Ledwell point proudly to two other sustainable projects, one brand new, the soon-to-be-constructed net-zero Welcome Center at Hampshire College  — the school’s first new building in a decade — and the Village Hill project.
Wright and his wife, Meg Kelsey Wright, a professional musician, now call Village Hill home, making them one of many to be drawn to the attractive mix of townhouses and single-family homes that are a key component of the massive, mixed-use endeavor.
“It’s a source of satisfaction for Mark and I,” said Wright, noting that the company has worked with Kuhn Riddle Architects and Berkshire Design Group, both of Amherst; Goggins Real Estate; Florence Savings Bank; MassDevelopment; and the City of Northampton to bring the project to life. “To put together the financing, the vision, and work with the state agencies and bring together all the talent that is needed to pull it off is very rewarding.”

Finishing Touch
Wright, now in his early ’60s, understands that this is the age when many people in business start to think about slowing down.
But he’s having none of that.
“I’m not done,” he laughed, “because there’s just really interesting stuff to do now. It’s different than it was five years ago, and I just wake up every morning, and I can’t wait to work on it all.”
This is the way it’s been from the start for this company, which has always been on the cutting edge, and has no intention of being anywhere else.