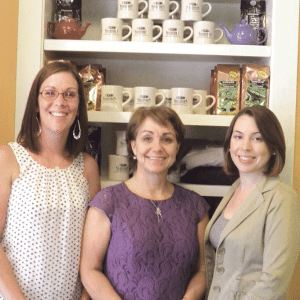 Mo McGuinness, center, has been a mentor to Karah Douglass, left, and Jillian Duclos since she hired them to work in Sylvester’s and Roberto’s restaurants.

Karah Douglass hasn’t forgotten the day she had to fire an employee at Sylvester’s restaurant. “I was so scared, I panicked,” said the eatery’s operations manager.
So she called Maureen “Mo” McGuinness, who owns Sylvester’s and Roberto’s Restaurant in Northampton, asking for advice.
McGuinness has not only been her employer, she has also been a mentor to Douglass since they met six years ago. She told Douglass not to apologize when she let the person go and to keep the conversation brief.
“I always say ‘I’m sorry’ to everyone,” Douglass said, adding that, in this instance, she refrained from doing so. “And after I called the employee, I felt very empowered, strong, and confident.
“I wouldn’t be where I am today without Mo,” she continued. “She pushes me every day to be a better manager and leader, and whenever I talk to her, she reminds me that I am amazing. Before I met her, I had never made decisions on my own, but she taught me to follow my instincts, that I know what I am doing.”
Sue Rondeau, vice president of Operations for Weed Man in West Springfield, has also relied on mentors to keep her confident about her ability to succeed. She was studying to earn her master’s degree in business administration at Bay Path College when she was diagnosed with breast cancer and had to stop taking classes to get treatment.
She was also working full-time, and when the treatment ended, she didn’t think she had the strength to continue in the MBA program.
But encouragement from mentor Laurie Rosner, an adjunct professor at Bay Path who has spent years in the banking industry, inspired Rondeau to return to school. She also received support from other women she had met at the college and says the mentoring she received has changed her leadership style at work and caused her to become more compassionate.
“I used to think, when you went to school or work, you needed to leave your troubles at the door. Now, as a manager, I realize that things don’t just happen before 9 a.m. or after 5 p.m.,” she said. “I have learned flexibility through example in the last five years and have had a paradigm shift.”
Rondeau is one of many women who have been mentored by Rosner, who summed up her mentoring approach this way: “my purpose in life is to push others to become uncomfortable so they can become the person they were meant to be. I tell my students they are meant to achieve greatness, and if they are not uncomfortable, they are not growing.
“It takes courage to do new things, but the women I network with are usually on a path; we all need to push beyond our fears because women deserve to be in boardrooms,” she went on, adding that experience provides women with perspective and builds up their bank of knowledge. “I tell women it’s about making mistakes and failing forward.”
Studies have shown that mentoring is powerful, and most women with a record of significant accomplishments can point to a number of supportive people during their careers. A recent study conducted by Susan Schor, a management professor at Pace University, showed that female corporate presidents and vice presidents have had up to four strong mentoring relationships that lasted two to five years, while only half of their male counterparts have ever had a mentor.
Many female executives are becoming advocates for other women, whom they meet in women’s organizations, during educational classes, or within their own workplace.
They say they get as much from the women they mentor as they give them. But unlike males, women turn to their mentors for the emotional support they need to succeed, which can happen when they are faced with a challenging situation or when they find it difficult to balance responsibilities in the workplace with their home lives, especially if they are caring for children or aging parents.
In fact, research shows what they do for each other is different from what occurs in most male mentoring relationships. A 2010 study by the nonprofit organization Catalyst, which promotes inclusive workplaces for women, found male mentors tend to sponsor each other rather than just provide advice and support, while women say gender differences make the emotional boost they give to each other critical.
“We need to continue to mentor other women so we can continue to build each other up,” Rosner said. “Women are so hard on themselves. They need to tell themselves they are smart and say, ‘I believe in me’ even if no one else does. If you accept yourself, the struggle goes away. It’s freedom to say, ‘I can be who I am because I am smart and I believe in myself.’”

Battling Barriers
Beth Lorenz owns the Vehicle Inspection Center Inc. in Greenfield and has been in the automotive industry for 27 years. “In 2010, I downsized my business life as an auto dealer and automotive partner so I could upsize my personal life,” she told BusinessWest. “It has been a journey that included selling a dealership, closing a dealership, separating from a family enterprise, divorcing, and re-establishing myself in a smaller business.”
Lorenz said she could not have achieved her goals without a few individuals who believed in her. She has had male and female mentors who have been younger and older than she is, but turned to the females when she was feeling unsure of herself.
One of them is retired Franklin County Clerk of Courts Eve Blakeslee. “She taught me how to be confident and strong and believe in myself,” Lorenz said. 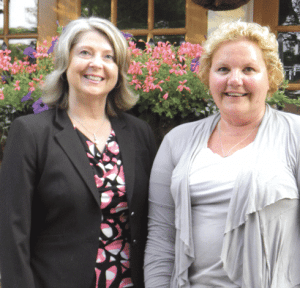 Laurie Rosner, left, has been a mentor to Sue Rondeau, and was instrumental in her decision to return to the MBA program at Bay Path College after cancer treatment.

When she had difficulty making a decision, Blakeslee would have her voice her thoughts out loud. “I needed someone to say, ‘you are thinking the right way,’” Lorenz said, adding that she feels calm whenever she is around Blakeslee.
Other mentors have taught her different lessons, and she was proud to name them. Susan McDonald from Smith College, who is her healthcare proxy, “challenges me to be the best woman I can be in all phases of my life — at home, at work, and in play.” Meanwhile, Becky Caplice, president and CEO of Greenfield Savings Bank, “demonstrates true love of community and possibilities through hard work, integrity and honesty.”
Then there’s Regina Curtis, executive director of Resource Development at the Greenfield Community College Foundation, who made Lorenz understand the value of networking, while the late Nancie Chamberlin “believed in me when I did not, was a fierce advocate of truth and justice, and was full of love …lots and lots of love. She encouraged me to open myself up to the heart of others.”
While some might wonder what love has to do with business, many of the women BusinessWest interviewed talked about being “compassionate leaders” and how women have changed the culture of the workplace, and will continue to do so as their numbers grow.
Figures from the U.S. Department of Labor Women project that women will account for 51% of the increase in total labor force growth between 2008 and 2018. And women say their expectations have had an impact on employers. “If employees are happy, a company does well,” Rondeau said. “The focus has shifted from the top down to the bottom up.”
McGuinness talked about the importance of keeping everyone happy, from customers to employees, which requires a woman to be compassionate, yet strong. “We have to prove we are solid and can play our game right, but also have compassion when people have challenges,” she said.
The mentoring Jillian Duclos received from McGuinness has allowed her to grow and inspired her to pursue her interest in politics. Since they met, Duclos has not only been a rising star in McGuinness’ restaurant businesses, she has also been a volunteer coordinator for State Rep. Aaron Vega, communications director for Holyoke Mayor Alex Morse, and campaign manager for Holyoke City Councilor Jason Ferreira, which was her first venture into the political arena.
“I had never done it before,” she said, adding that McGuinness taught her what she knew about fund-raising, and she recently landed an internship with U.S. Sen. Elizabeth Warren.
Duclos met McGuinness when she was 18, and said her mentoring began after she was hired at Sylvester’s. The 24-year-old explained that, as time went on, McGuinness expected more and more of her. She met those demands and said she hopes to pay forward what she has received.
“You want to give back what people have given to you. Mo encouraged me to return to school and helped me to go on and do bigger and better things,” Duclos said, adding they attended the Women’s Fund of Western Mass. Leadership Institute for Political and Public Impact together.

Shining Examples
Many women, including McGuinness, Lorenz, and Rondeau, have been successful in male-dominated industries. They were among a small group of female pioneers in Western Mass., and others look up to them today as their role models.
But these women say their journey was made easier due to their own mentors. Auto-dealer owner Lorenz was featured in Time magazine in 2009 when she was chosen to receive the Time Dealer of the Year Award for outstanding performance and being a valued member of the community. She called McDonald when she was in the airport on her way to speak to a crowd of 22,000 people at the National Automobile Dealers Assoc. Convention and had a case of the jitters.
“She has shown me how to be a very strong person,” Lorenz said, adding that the support she received was reassuring, even though they were in different industries.
Since that time, other women have sought her advice. “Women need to see other women who are confident and capable in their industry because they don’t have that opportunity very often. It gives them someone to talk to when they are not feeling that way and allows them to move forward,” Lorenz told BusinessWest.
McGuinness said it is still a struggle for women to rise to the top, especially if they are in male-dominated industries. In fact, people sometimes assume she is an employee of her two restaurants, while that never happens to her male co-owner. “It’s still a male-dominated world, and even though we have made it, young women struggle with the same issues that we did,” she said. “But today I won’t do business with someone if they don’t treat me the same way they would treat a man.”
Rosner concurred. “It’s about respect. We have had to fight the fight to stay on top internally within our organizations,” she said, adding that she started her banking career as a receptionist in 1984. “But you can do anything you believe you can do, and leading with compassion is what makes us amazing women as we help and mentor one another.”

Path to Success
Rosner continuously prods her students to realize their potential. At the end of every class she teaches and in e-mails, her message is the same. “I tell them, ‘now go and be great.’”
So, as more women step up to the plate to help themselves and others, their belief in what is possible continues to grow.
Rosner encourages all women to ask questions and do things even when they feel fearful. “The world is limitless, but you are only as good as the questions,” she said. “So, if you see a woman you admire, ask her, ‘Will you be my mentor?’”