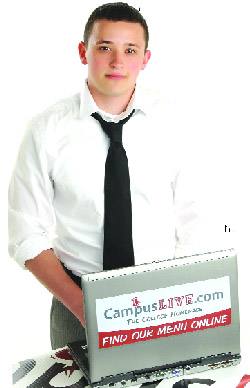 Boris Revsin likes changing established ways of doing things. His first venture into the business world was at age 13, when he created a successful electronic-marketing (e-commerce) site for his grandfather’s printing business.

At age 16, he started a Web-development company and talked local businesses into going online. “I wanted to be able to make money while I slept, and it’s fun creating systems for people that work when you are not there,” he said.

The 23-year-old is co-founder of CampusLIVE Inc., an Internet business with more than 200 colleges and universities that have their own homepages offering students single-click access to every resource they need on and off campus, including restaurants, businesses, parties, events, academic help, and social networking.

“I wanted to put the power back into students’ hands and have a one-stop shopping place for them,” Revsin said.

He received a 2007 Harold Grinspoon Spirit Award for his work, and finished third in the 2008 BusinessWeek Top Entrepreneurs Under 25 competition. Gov. Deval Patrick recognized Revsin with a 2008 Emerging Entrepreneurs Award from the Mass. Office of Business Development, and he was nominated as Entrepreneur of the Year by Enterprise Bank’s Celebration of Excellence.

He has spoken on dozens of radio programs, been featured in more than 40 college newspapers, and uses his creativity and expertise to promote causes he believes in.

“I built and developed a Web site for the Russian Jewish Community Foundation,” he said, adding that he has also donated help to the Mass. Soldier’s Legacy Fund and other community-based groups. “I help them establish self-sustaining systems which will generate income.”

Since establishing CampusLIVE, Revsin has partnered with Paramount Pictures, TV Guide, Weather.com, and other major brands.

“I am really good at getting people to look at things and gain an audience for products and services. But my favorite part of this is to see that thousands of people have looked at something I created and benefited from it.”—Kathleen Mitchell