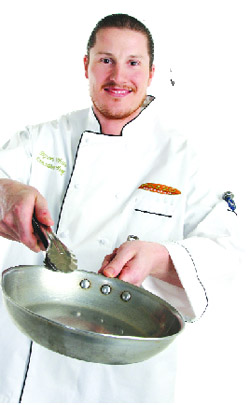 Growing up with 11 siblings, Byron White developed a work ethic early on.

“We never got anything for nothing,” he said. “My parents were hard workers, and from a young age, if you wanted a dollar, you had to go out and make it.”

That quality served him well when he stumbled upon the restaurant business, washing dishes at Leone’s in Springfield. “Five minutes in, I knew I wanted to work in restaurants,” he said. “I loved the juice, the pressure. So I worked my way up.”

That journey — White is a self-taught chef who has worked in notable kitchens across the Pioneer Valley and all over the U.S. — eventually led to part-ownership of Pazzo at the Basketball Hall of Fame, where he continues to stir passion into every recipe.

“It’s like performing on stage,” he said. “The kitchen is our stage, and the dining room is the audience. It gets my energy pumping when people sit down in the audience and watch the stage; that’s why I like the cooks working in an open kitchen, so they can see the immediate reactions from people.”

Having returned to “the city that gave me my wings,” White has helped raise funds for groups including Habitat for Humanity, Rebuilding Together Springfield, Springfield Kiwanis Club, the March of Dimes, the Jimmy Fund, Children’s Miracle Network, the Muscular Dystrophy Assoc., and Shriners Hospitals for Children. That’s not surprising, since he sees his entire career as a kind of service.

“Restaurants are a small branch of the hospitality tree,” he said. “It’s not just about providing great food, but great service and ambiance, hitting all five senses and that sixth sense of culinary euphoria.

“It’s about providing people with that thing I call the ‘wow’ factor,” he added. “At the end of the night, our team looks back and says, ‘wow, we put out a great product and gave people a great experience. Let’s pack it up and do it again tomorrow.’”—Joseph Bednar