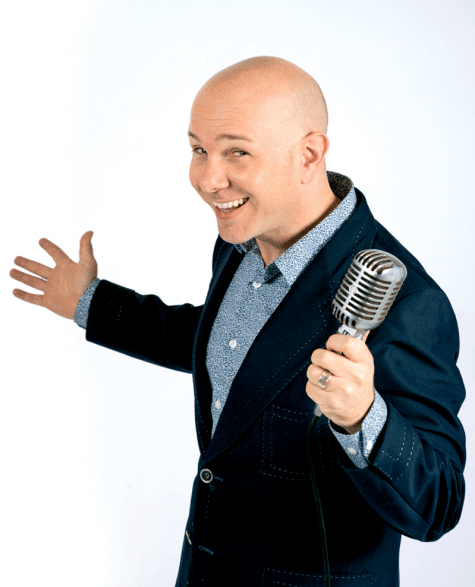 ‘Monte’ Belmonte (only his mother still calls him Chris) says he probably owes his career to a solid Al Gore impersonation.

OK, that’s an exaggeration, but that impression definitely helped get him started in radio. He was an intern at a Boston station in the fall of 2000, and started doing the Gore impersonation (off the air) well into the campaign. One of the show’s hosts thought it was quite funny and put him on the air. It caught on, and, as everyone should recall, that race didn’t end the first Tuesday in November; it wasn’t official until all those hanging chads in Florida were counted weeks later.

So Belmonte kept on doing the impersonation, and people at the station soon realized he had many other talents. Fast-forwarding a little, he and his future wife relocated to this region, and Belmonte took a job with 93.9 the River, and he’s been there ever since, now serving as program director and morning-show host. He still does an occasional impression — he says he can do a decent Donald Trump — but adds quickly that this is not what he’s known for.

What he is known for, and what certainly impressed the 40 Under Forty judges, is his work in fund-raising, specifically for two main causes — helping those fighting cancer, and battling hunger.

With the former, his work focuses on the Cancer Connection, which promotes itself as “a place to find strength,” and it involves pitching a tent in the winter on the old courthouse lawn in Northampton to raise both awareness and money. The first year, the program raised $5,000; by the 10th, it was raising more than $100,000.

As for the latter, Monte’s March has become part of the region’s lexicon. He started with a single shopping cart and a trek between Northampton and Greenfield, collecting money for the Food Bank of Western Mass. as he went. Now, he has several “hot-rodded” carts thanks to students at Smith Vocational and Agricultural High School, a two-day trek between Springfield and Greenfield, and some people to keep him company, including U.S. Rep. Jim McGovern. Last year, the march raised more than $200,000.

“The congressman was with me the whole way, and listeners sign up to independently fund-raise, and they join me on the expedition,” he said. “The march has really taken off.”

In some respects, the region has Al Gore to thank for all this, but mostly it’s indebted to the man who can impersonate him.