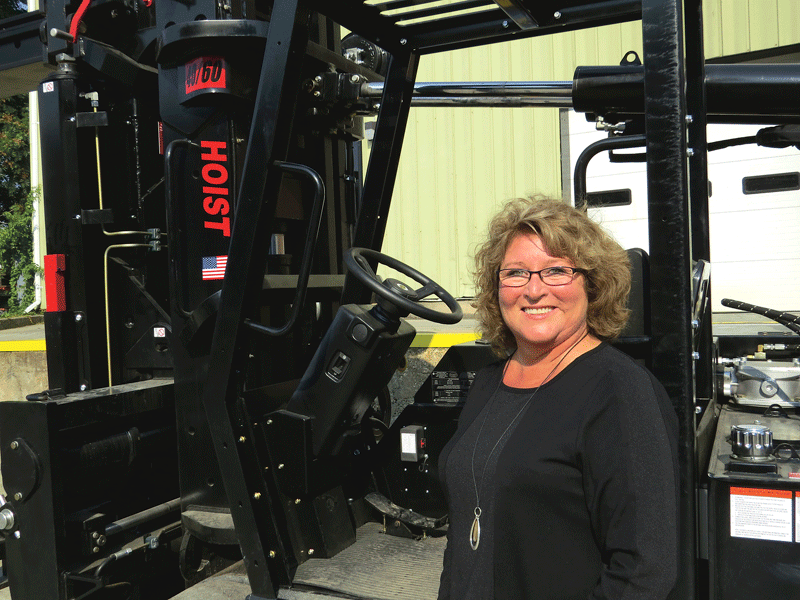 When Chicopee Industrial Contractors (CIC) officially marked a quarter-century in business a few months back, it did so with an elaborate open house at its headquarters in Chicopee.

This meant that a good number of those invited — especially a host of the company’s best customers — had to rely on their car’s navigation systems to get them to the ceremonies.

That’s because, for starters, they’d almost certainly never been there before — and also because this business is not exactly easy to find. Indeed, North Chicopee Street is a dead-end road in the northwest corner of the city, not far from Route 391. Meanwhile, the company’s facility is a somewhat non-descript building, with its claim to fame being that it housed Hampden Brewing Co., maker of Hampden Ale, decades ago.

Those customers, most all of them manufacturers — although there are some other sectors in the mix, including area municipalities — don’t come to CIC, because it comes to them, specializing, as it does, in rigging, heavy lifting, machinery moving, machine installation, millwrighting, machine repair, plant relocations, and more.

Once they found the place, open-house attendees could see that the company boasts a large inventory of equipment, space to store machinery for some customers, a training room where employees hone both technical and soft skills (more on that later), and even a large picture of the property with the Hampden Brewery sign on the roof.

Most of the guests probably won’t be back until there’s another round-number anniversary, said Carol Campbell, the company’s energetic president and CEO, who told BusinessWest that she’s marking her anniversary, in part, with steps and strategic planning to ensure that there are such occasions.

“We’ve done some looking back at where we’ve been and what we’ve accomplished,” she said of anniversary celebrations that officially began in February. “But we’re really looking ahead to what we need to do as a company. We want to be here in another 25 years.

“And what we really need to do is build on our strengths, and there any many of those,” she went on, “while also making ourselves more versatile and better-equipped to take on more kinds of jobs.”

There is much that goes into that phrase ‘better-equipped,’ including initiatives such as the company’s most recent acquisition, a 40/60 Hoist, as it’s called. The numbers reflect the fact that can handle loads of 40,000 to 60,000 pounds, and Hoist is both the name of the manufacturer and a description of what it does.

The machinery was acquired to give CIC more flexibility and the ability to work more efficiently, said Campbell, adding that it’s a solid investment in the company’s future.

As are other measures that fall into that category of being ‘better equipped,’ such as the many training programs carried out in a classroom carved out of space on the building’s second floor and other efforts to build and strengthen the CIC team.

“What makes CIC unique is that this is a group of individuals, brought together by skills, that believe in the company,” she told BusinessWest. “And they not only believe in our mission and our vision — they believe in CIC. It’s not ‘Carol Campbell’s company,’ it’s CIC, and that became apparent at our open house.” 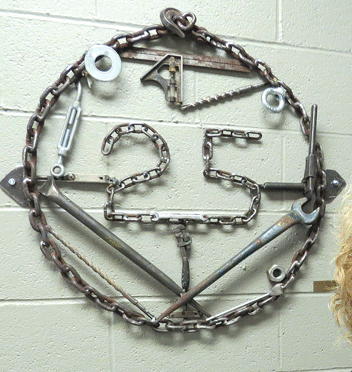 But while Campbell said the 25th anniversary was a chance for her to thank customers such as Lenox, Smith & Wesson, Olympic Manufacturing, and others, as well as that team she talked about in such glowing terms, that second constituency turned the tables and thanked her with a gift.

This was a sculpture of sorts — a collection of the various tools of this trade (turnbuckles, chains, wrenches, and even a bottle opener as a nod to the building’s past as a brewery) welded into something approximating the number ‘25.’

Now holding down a prominent piece of wall space at CIC headquarters, the artwork is symbolic in that those tools, and employees’ mastery of them, made ‘25’ possible. This is a success formula that Campbell won’t be changing — but she may add some new ingredients to ensure that higher numbers can be reached.

As she talks about economic cycles, and especially downturns, both modest and severe, Campbell does so with tremendous recall and attention to detail.

Most people who have a business within the construction sector or who have a customer base dominated by manufacturers have such ability, and for good reason. Those are sectors that are among the most vulnerable to recessions, and, as noted, CIC is tied to both.

So she speaks from experience, and lots of it, when she says her business is what she calls a ‘lagger.’ That’s not a real word, but one nonetheless often used to describe a business that lags behind others when a recession hits. And that’s because there’s work to do soon after the economy turns south.

For CIC, that work translates into handling assignments for companies that are downsizing — or worse, as in closing their doors.

After work of this nature is done, then the recession hits for CIC. Which means that, while the phones stopped ringing at most businesses just a few hours after the planes struck the Twin Towers on 9/11, they didn’t really stop ringing at CIC until several months later. And it was the same later in the decade; while 2008, the height of the Great Recession, was the year of doom for most businesses, it was 2009 for CIC.

But while the declines come later, they are still profound, said Campbell, adding that one of her goals as she looks at what’s ahead for CIC is to reduce the impact of such declines, or, in other words, make the ups and downs (or at the least the downs) less dramatic.

This will be difficult, given the nature of the customer base and the general portfolio of products and services, but initiatives such as the new 40/60 Hoist will certainly help, she said.

In the meantime, the company will look to make itself more of a force when the economy is doing relatively well. And this involves sticking to the playbook first drafted in 1992, the one that enabled that sculpture to take the shape it did, and making the team carrying out those plays even stronger.

Elaborating, Campbell said one of her priorities moving forward is securing leadership for the future — at all levels.

“As we’ve brought new employees on from 10 years ago and 12 years ago, and even some of the more recent additions from the past few years, we’ve trained them to take leadership roles,” she explained. “So as we say ‘goodbye’ and ‘thank you’ to our senior staff, leadership can be transferred to that younger generation.”

And while developing leadership abilities, the company is continually building upon the skills of its team members, one of the keys to its ongoing success, Campbell noted, adding that this was one of the matters she’s stressed to employees as the company has marked 25 years in business.

“I told them that we got here by continuing to sharpen our skills, whether it be our technical skills or our soft skills,” she said, while noting that the latter, which involves team interaction with customers, is just as important as the former. “This has certainly served us well, and we will continue on that path.”

One of the biggest challenges the company faces moving forward is securing enough talented workers to handle the various types of assignments CIC undertakes.

Campbell said she has struggled for many years now to build the workforce when expansion was possible and needed, and like almost every owner of a manufacturing company or contractor, she’s concerned about the prospect of replacing those workers who will retire in the years to come.

“It’s definitely been a challenge — for us, and for everyone,” she told BusinessWest, adding quickly that the generally frustrating search for talent is not exactly stifling the company’s growth efforts, and it’s certainly not keeping CIC from taking on work. But it is a concern moving forward, and one of the many matters to address as the company ponders what the next 25 can and should be like.

As she posed for a few pictures around and on the 40/60 Hoist, Campbell looked ready to put it through its paces.

But she’ll leave that to her talented, experienced crews.

Instead, she’ll continue to do what she’s done from the start — manage, do some selling, build relationships, be active within the community and, most important, set a tone for the company she founded.

That would be a tone of continuous improvement and performing well as a team — something her father, Vic Fusia, who coached the UMass Amherst football team in the ’60s, would certainly appreciate.

Those attributes are responsible for the sculpture now gracing the hallway of the old brewery in Chicopee, and they’re the ones that will carry the company to new milestones — and moving experiences of all kinds.

It’s Time to Get the Message