For the Agawam Cinemas, There Will Indeed Be a Sequel

Kimberly Wheeler says she was pleasantly surprised by the level of enthusiasm she encountered from local movie fans who supported her Kickstarter campaign to raise funds to renovate and reopen the Agawam Cinemas.

Facing an ultimatum effected by the ever-present hand of technology, Agawam Family Cinemas was forced to shut down last year.

The deadline had been looming for some time following the announcement that 35-mm film would no longer be used. The result was a difficult decision for many theater owners — initiate the costly conversion to digital projectors or close their doors.

Then-owner Sal Anzalotti, who had run the cinemas for nearly 20 years, elected to close the business, much to the devastation of many local families who frequented the cinemas. For a time it looked like the reign of movies at the 866 Suffield St. location was over; the price of bringing movies back to Agawam was seemingly too steep.

Fast-forward almost one year, and those very families once fraught with despair are now teeming with joy and excitement. The movies are indeed coming back to Agawam, with Kimberly Wheeler leading the way.

“This was an opportunity I simply couldn’t pass up,” said Wheeler, a lifelong Agawam resident and movie buff who spent countless hours catching films at the theater with friends and family. “When it closed its doors, it was absolutely heartbreaking.”

Wheeler had no experience prior to this year in acquiring and operating local cinemas. An EMT for 13 years and also an instructor of emergency medicine, she might have been the last person one might have expected to embrace such a massive undertaking. There are many innate challenges to restoring a cinema and getting a business back on its feet — challenges that would have daunted most people.

But with a lifetime of movie memories and the desire for new ones serving as her inspirations, Wheeler excitedly took over the shuttered cinemas and hasn’t looked back since.

Having only rented the business — now called Agawam Cinemas — for 10 months, Wheeler has gone a surprisingly long way in a short period of time. Needing to raise about $150,000 in order to purchase digital projectors, it was a tall task to get the business off the ground again.

But Wheeler wasn’t alone with her aspirations. Hundreds of area residents and business owners, many with similar recollections of catching movies in Agawam, showed their support through $45,000 in donations during a month-long fund-raising effort on Kickstarter. Additionally, several individuals reached out to Wheeler to express their support of the project and congratulate her for bringing the movie tradition back to Agawam.

“I had so much support from Agawam residents and businesses. It was stunning — the most heartwarming thing I have ever seen,” Wheeler told BusinessWest. “I don’t know if I could have done this without all of the help I’ve gotten from the community. It really does take a village.” 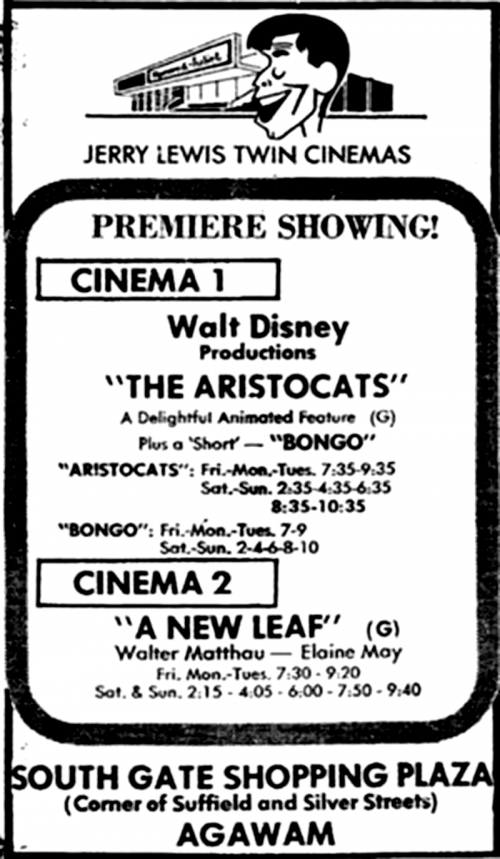 It means a lot to Wheeler to have the community’s support as she continues through the renovation phase of the project. Working closely with Easthampton Savings Bank, she will provide most of the remaining funds for digital projectors from her own pocket. A murder-mystery-dinner fund-raiser is scheduled for April 11, but those proceeds will merely help defray the cost of acoustic improvements to the theaters.

Those costs are well worth it, Wheeler said, especially since the project has come as a pleasant surprise not only to Agawam residents, but to film fans throughout the area. Many people used to travel several miles to see movies in Agawam, passing up larger cinemas to experience the quaint environment.

“I got many letters and e-mails of encouragement,” added Wheeler, who hopes construction will be complete in time for a grand reopening in May or June. “It’s so important to know that the town and region are behind you 100% when you do something like this. People really missed this place.”

Residents and town officials alike are eagerly anticipating the reopening of the cinemas. From family events to nights out with friends, Agawam Cinemas will be ideal for people of all ages.

Wheeler, who has always enjoyed watching movies with her father, wants to give others a chance to experience the thrill of taking in movies with their families as well. She has seen countless movies in all genres over the years in Agawam, from Monsters University to Philomena. One of Wheeler’s fondest memories of the Agawam cinemas was seeing the film Django Unchained with her father. Theater policies at the time required at least four guests to be in attendance for the movie to run, but for a while Wheeler and her father were the only guests.

“We were sitting in the lobby, holding our breath to see if two other people would arrive to see this film alongside us, when finally one couple arrived,” Wheeler recalled. “We all let out a sigh of relief and laughed together. It was a team effort to get this film presented that evening, and we all enjoyed the film immensely.”

Town officials, meanwhile, have plenty of great memories of the place as well, many of their recollections dating back to the early days of the cinemas. Listening to their stories, one can easily understand how the cinemas have been stitched into the fabric of Agawam.

“I am both pleased and excited about the renovation and reopening of the Agawam Cinemas at the Southgate Plaza,” said Agawam Mayor Richard Cohen. “I remember when they originally opened as the Jerry Lewis Twin Cinemas. We are fortunate that the town’s only movie theater will once again be offering first-grade services with a hometown atmosphere. I can’t wait for the ribbon cutting and the ability of watching movies once again here in Agawam.”

Built in the late ’60s, Agawam Cinemas was originally part of a chain of Jerry Lewis Twin Cinemas franchises that sprouted up across the country, with individual operators paying around $10,000 to operate a given cinema. The two auditoriums hold 175 and 250 guests, respectively, with the unique distinction of having tables in front of every seat. The theaters used to hold more than 400 each, and the decision to add tables reduced seating capacity but increased guest comfort.

Since taking over the business, Wheeler has placed an emphasis on creating the most comfortable and convenient atmosphere possible for her guests. Upgrades are currently in progress to make the building fully ADA-compliant, and the lobby has experienced a makeover as well. In addition to standard concession choices that will be made available for snacks, Wheeler is also thinking outside the box by offering guests gourmet chocolate creations from Maureen’s Sweet Shoppe in East Longmeadow. Now that movies are coming back to town, she wants other businesses to benefit as well.

On the topic of business, Wheeler praised New England Theater Co. of Connecticut for its construction work on the building, and she’s eagerly awaiting opening night.

“We want to make it a destination for people, from the atmosphere to the exceptional customer service,” Wheeler said. “This is something that will get people out of their houses and help them forget their troubles. It will provide a great family and group experience.”

Unlike large movie theater chains, Wheeler is striving to foster the same neighborhood feel the place has always been known for, a venue where people can build friendships on the foundation of a common bond. By intertwining modern technologies with nostalgic elements, the cinema will transcend the zeitgeist of its initial creation and usher in a new era of movie magic in Agawam.

To celebrate the building’s history, the lobby will feature several items of Jerry Lewis memorabilia and other hallmarks of the cinema’s past. Prior to entering the theaters, guests will get to experience the history that connects generations of Agawam residents.

“We want the lobby to be comfortable, with a focus on nostalgia. We are digging up everything we can find, from the groundbreaking of the cinema to current day,” Wheeler said.

She plans to show first-run movies at the theaters, perhaps in an alternating sequence that allows about four movies to play on a given day, two per theater. Though the details haven’t been fully ironed out, Wheeler said she will seek input from guests on what movies they would like to see and try to create a balance.

“We want to make it flexible and give them the opportunity to let us know what they want to see,” she told BusinessWest.

For many residents and town officials, it won’t even matter which movies are playing, as long as the big screens are bright again in Agawam.

The State of the Unions

Who Should Be Your Executor?