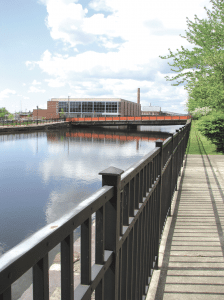 The Massachusetts Green High Performance Computing Center is not an end in itself, but hopefully a catalyst for the entire Innovation District.

Alex Morse has a message for Holyoke’s residents and businesses: keep your eyes open.
Over the past two years, said the city’s 24-year-old mayor, “we’ve been doing some excellent planning, laying the foundation for things we’ll be pursuing in 2014. And we have a lot of projects happening this year. Residents, and people visiting Holyoke, have been noticing the changes in the city.”
Added Marcos Marrero, Holyoke’s planning director, “where 2012 was a big year for planning, and in 2013 we took steps to bring things to fruition, we’ll actually see that fruition in 2014.”
For instance, he noted, the Canal Walk project will break ground as soon as the ground thaws, while a $2 million train platform at Main and Dwight Streets, intended to bring passenger rail service to the city, will begin construction this year as well. “And there are a few private projects in the works, too. We’re seeing the needle moving on private activity.”
When Morse took office, he talked up a strategy of bringing municipal brass, economic-development agencies, and business leaders together to formulate and implement growth strategies in several different sectors.
And the city has seen a number of successes, many set in motion long before the current mayor’s tenure, from the $165 million Massachusetts Green High Performance Computing Center that opened in 2012 to the $1.4 million renovation of Veterans Memorial Park, a $14.5 million renovation of the public library, a new, $8.1 million senior center, and a $250,000 skate park at Pulaski Park, all of which opened in 2013. And the city continues to develop residential projects such as conversion of the former Holyoke Catholic High School property into 55 units of housing.
“The city is taking an active role in making the city a more attractive place,” Morse said, “a place where people want to live and where businesses want to be.”
Meanwhile, the urban-renewal plan unveiled by the Holyoke Redevelopment Authority in 2012 — which includes the city’s acquisition of 131 parcels, 92% of which are vacant, as well as a series of infrastructure upgrades and improvements, all with an eye toward spurring more private investment in the city — continues apace.
“The city approved the plan and sent it to the state to be approved, and it was approved in February 2013,” Marrero said, noting that the Redevelopment Authority has received its first seed money — just $100,000, but it’s a start — to start making land deals.
But Morse and Marrero continually stressed that measuring progress in Holyoke is not just an exercise in counting projects; it involves reshaping the image of the city in order to grow and attract sustainable economic vitality. For this issue’s Community Spotlight, they share some of the ways the city is working toward that goal.

Creating Change
Take the creative economy, for example. More than 100 painters, photographers, crafters, filmmakers, and other artisans had already set up shop in Holyoke’s central district when Morse and other leaders began discussing how to galvanize the city’s creative energy into real economic development.
One of the first steps was hiring Jeffrey Bianchine, a photographer who lives and works on Main Street, as the city’s ‘creative economy coordinator’ late in 2012. His roles include connecting the various artists and cultural activities in Holyoke, forging links among creative businesses, and using the presence of arts-related enterprises to boost economic development.
But when city leaders talk about the creative economy, Marrero said, they’re taking a much wider view than that phrase might suggest.
“We’re talking about companies that employ creativity as a centerpiece of production,” he explained. “It can be fine art, but we’re not building an economy based on painters. Craftspeople, photographers, architects, marketing, people like Steve Porter, who’s nationally acclaimed for digital media … what all these industries share is a need for creativity and artistry.”
Bianchine told BusinessWest last year that ‘art’ is too small a term for what the city hopes to accomplish. Rather, it’s forging connections between artists and the overall business community. 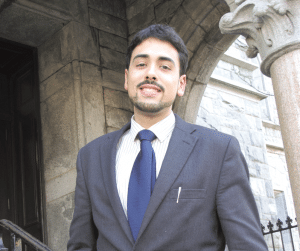 Marcos Marrero says building a creative economy in Holyoke means forging connections between creative businesses and companies of all kinds.

One way the city hopes to do that is through a program called SPARK (Stimulating Potential, Accessing Resource Knowledge) geared toward identifying, recruiting, and, yes, stimulating individuals and businesses that have a desire — a spark, as it were — to move innovative or creative business proposals from concept to reality.
The program — which just this month received a $250,000 grant from the state’s Working Cities Challenge program — provides access to community-based resources (nonprofits, government, private business, and higher education), and is run through the Greater Holyoke Chamber of Commerce Foundation in conjunction with several local agencies.
“In cities that successfully develop their local economies, the characteristic they really share is cross-sector cooperation, with both nonprofits and the private sector, to solve very complex problems,” Marrero said.
“We want to start changing our value proposition,” he continued. “We’re not the capital of making paper anymore. We want to become a center of innovation and making things in new ways, and SPARK is really a response to that. We have several strategies, whether it’s being site-ready for businesses to build or rehab buildings, whether it’s fostering specific industries like the creative industry.
“But we want to open up more opportunities for people to be involved in the creative economy, in business and social ventures, and recruit and identify good and promising ideas for new ventures,” he added. “Several will turn into businesses, and some of them will fail — and that’s OK too, because it will make them better for their next venture, or make them more marketable for their next job.”
In a similar vein, the Holyoke Creative Arts Center, a nonprofit creative-learning resource, will benefit from a $75,000 Adams Art Grant. “We want to reposition the center so it’s more financially sustainable on its own — that it doesn’t become just a teaching center for do-it-yourself stuff, but move to the next level, so artists can start marketing their products … start making money, frankly.”
It’s an example of the city leveraging its assets to grow something larger than the sum of its parts, Marrero said, similar to the vision of the Innovation District Task Force, which is tasked with cultivating economic activity along the downtown canals, near the computing center. “We have this great computing resource; now what do we do with it?” Marrero said. “That’s the challenge — it’s not just new construction; you have to know how to leverage it.”

Upping the Ante
Holyoke is also moving quickly to procure benefits from MGM Springfield’s planned $800 million casino project in that city’s South End. Specifically, the city and casino reached a ‘surrounding-community mitigation agreement’ that calls for MGM to pay Holyoke $50,000 up front and nearly $1.28 million over 15 years if it gets a casino license, and also to provide residents hundreds of permanent job opportunities.
“MGM had options to negotiate with surrounding communities,” said Morse, whose initial campaign for mayor emphasized his opposition to siting a gaming resort in Holyoke. “We negotiated with them and are the only non-abutting community to get that designation from them.
“They’re committed to jobs for Holyoke residents at all different levels,” he added. “We’re working with CareerPoint to identify those applicants, and also working with the Chamber of Commerce to identify small businesses in Holyoke that could be contract vendors for services to be provided at the site.”
The main challenge regarding a casino, the mayor said, is how to mitigate the negatives and maximize the positives.
“A casino potentially sited in Springfield only accentuates Holyoke’s ability to set itself apart from other gateway cities to create a different kind of economy,” Morse told BusinessWest. “People are seeing that we have an economic plan that doesn’t rely on one thing, and are impressed that we have a long-term economic plan complemented by short-term gains.”
To that end, Morse and other leaders will continue to pursue development projects while trying to balance growth with neighborhood issues and quality of life, he explained.
“We’re sending a message, with some of the things that are happening, that our city is open for business,” he said. “We do have sites for development, not only in the center of the city, but in all areas of the city. The message is that we’re committed to development; we know we have to generate jobs here and bring in more opportunities for tax revenues, just as every city seeks to do.”
And people who keep their eyes open do recognize the changes, he added. “Sometimes we don’t know exactly what’s going on in a building, but when you see somebody buying it and renovating it, it makes a noticeable difference.”

Holyoke at a Glance 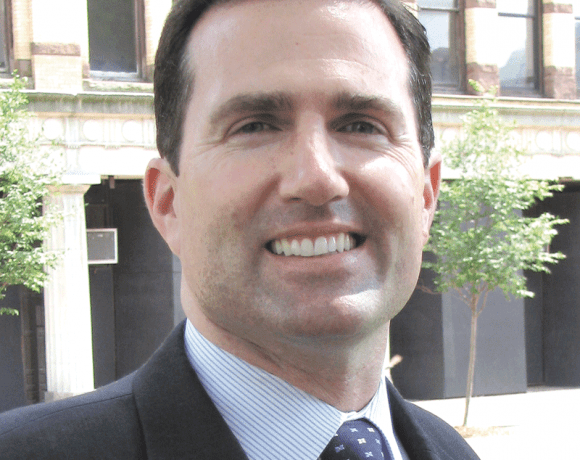 How a Baker and Gov. Baker Came to Be a Team