Time to Make a Strong Case 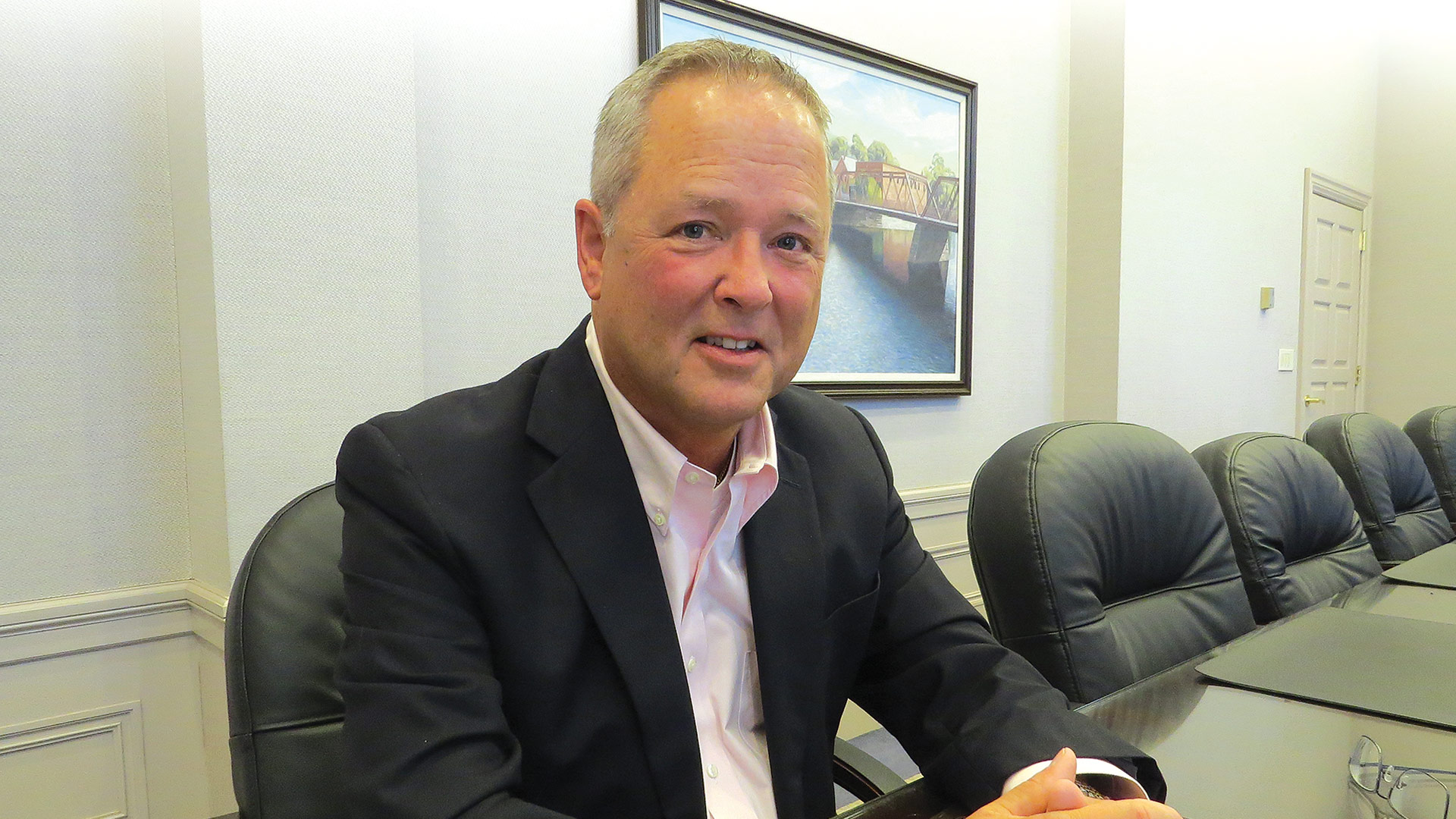 For years now, it’s been the common refrain among those charged with hiring at companies across a number of industry sectors: good help is hard — or at least harder — to find and retain.

Increasingly, words to that effect are being heard in a sector where they’ve traditionally not been heard as much — the legal community.

Indeed, representatives of several area firms told BusinessWest that, while they can still recruit and hire talent — for the most part — it’s a more challenging assignment in many cases and often takes longer.

“It’s certainly more challenging now than it has been in the past,” said John Gannon, a partner and employment-law specialist at Springfield-based Skoler, Abbott & Presser, who penned an article for this issue on the many questions employers have about dealing with coronavirus. “But this is not unique to law firms — this is economy-wide, nationwide; it’s just hard to find people because everyone’s working.”

Indeed, this is, by and large, a buyer’s, or job seeker’s, market. Given these conditions, where law firms — like other employers in virtually every sector — are upping the ante with wages and benefits, it becomes more difficult for Springfield-area firms to compete. It’s a completely different playing field than the one that existed during and just after the Great Recession, he went on, when jobs were scarce and law firms saturated with lawyers were very much in the driver’s seat.

Ken Albano, managing partner at Bacon Wilson, which is based in Springfield and also has offices in Northampton and Westfield, agreed.

“It’s certainly more challenging now than it has been in the past. But this is not unique to law firms — this is economy-wide, nationwide; it’s just hard to find people because everyone’s working.”

“It’s challenging, but then it’s always been somewhat challenging in this market,” he told BusinessWest, adding that many factors are contributing to the current environment, including everything from the smaller classes at many law schools, which resulted from that depressed job market after the Great Recession, among other factors, to the lower pay scales in the 413 compared to markets like Boston, New York, and even Hartford (more on that later), to what appears to be fewer people moving into certain areas of the law.

To emphasize that last point, he reached for the Feb. 24 issue of Massachusetts Lawyers Weekly, specifically the ‘Employment’ page. Using a blue sharpie, he had circled the ads seeking litigators with varying levels of experience — and there were quite a few of them. 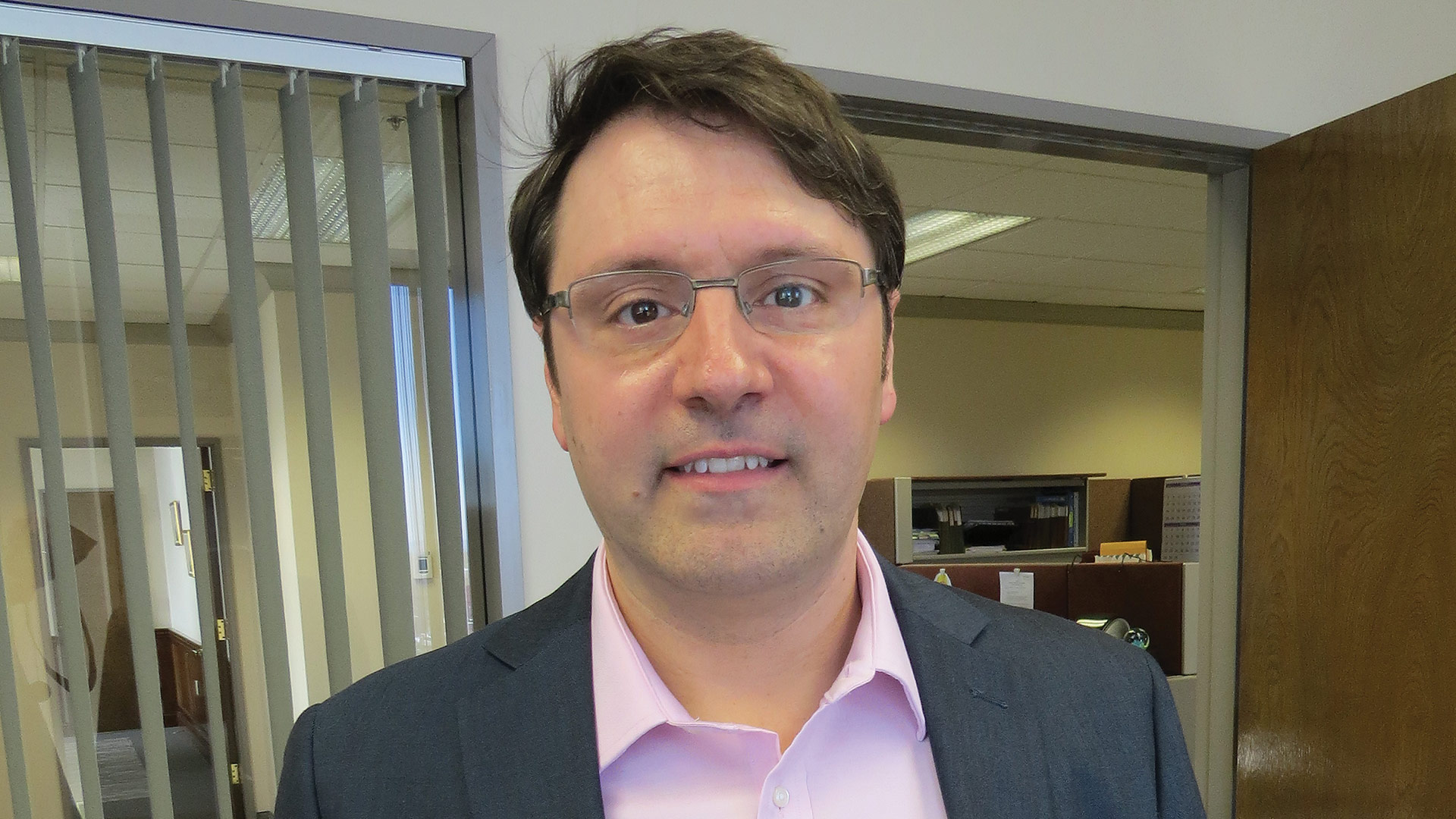 John Gannon says recruiting lawyers to this market has always been somewhat challenging, and with the current job climate, it is even more so.

Albano’s interest in those ads was understandable.

“Our firm’s biggest frustration has been in that one particular practice area, litigation,” he said, noting that the firm lost two of its best litigators, Bob Murphy and Kevin Maltby, to the bench in recent years, and has struggled to fill the void. “And I’m not sure why that is; maybe it’s the anxiety, maybe people don’t like to speak in public. It’s not just us — people are struggling to find people who want to go to court.”

Putting aside the need for litigators, and even litigators who love dogs, hiring has, overall, become more challenging for law firms in Greater Springfield, and this is prompting a response similar to that given by those in other sectors. Specifically, it’s one focused on being imaginative and resourceful, and employing tactics designed to familiarize law-school students with opportunities in this area and also sell this region both to those just starting their careers and those looking at a lateral move.

“We made a decision at a partners’ retreat to put a very targeted and strategic approach to hiring in place,” said Betsey Quick, executive director at Bulkley Richardson, which has offices in Springfield and Hadley, adding that part of this strategy is to focus primarily on area law schools, bring in summer associates and interns, and make them familiar with the firm and the region. And it’s a strategy that’s working.

For this issue and its focus on law, BusinessWest takes a look at the job market and the challenges facing firms seeking to hire. As in the courtroom itself, this assignment requires making a very strong case in order to prevail in the end.

As this issue went to press, those managing area law firms certainly had a lot more on their minds than finding new associates.

Indeed, as the number of coronavirus cases climbed steadily upward through last week, every firm in the region was developing contingency plans, making preparations for employees to work at home if necessary, checking corporate insurance policies to see if they’re covered (probably not) in the event that the virus seriously disrupts business, and monitoring the situation at the various law schools — some, including Western New England University, were weighing whether to shut things down for the rest of the spring, and some had already decided to do so.

“Our firm’s biggest frustration has been in that one particular practice area, litigation. And I’m not sure why that is; maybe it’s the anxiety, maybe people don’t like to speak in public. It’s not just us — people are struggling to find people who want to go to court.”

But the matter of hiring is an all-important one in this sector, and it is an issue for the long term as firms look to do everything from filling specific vacancies in departments to ensuring a healthy mix of young and mid-career lawyers to ensure sustainability and inevitable transition to a younger generation, said Quick, adding that Bulkey Richardson recognized a need for such a mix and is aggressively pursuing one.

“We have a commitment to hire, or attempt to hire, at least three young people per year,” she said, adding that this number could go higher if the firm sees good talent and doesn’t want to pass it up. “And that’s part of our strategy; if we don’t keep a targeted and strategic approach to hiring young lawyers, we’re going to be top-heavy.

“Every firm faces succession issues,” she went on. “It’s a difficult, challenging problem to face, and part of it is just bringing up young lawyers behind them, especially while they’re here to talk to them and train them and take them to meet clients; it’s important to tap that wealth of knowledge.”

But when it comes to hiring lawyers, the Springfield market has always been somewhat unique — and challenging, said those we spoke with. 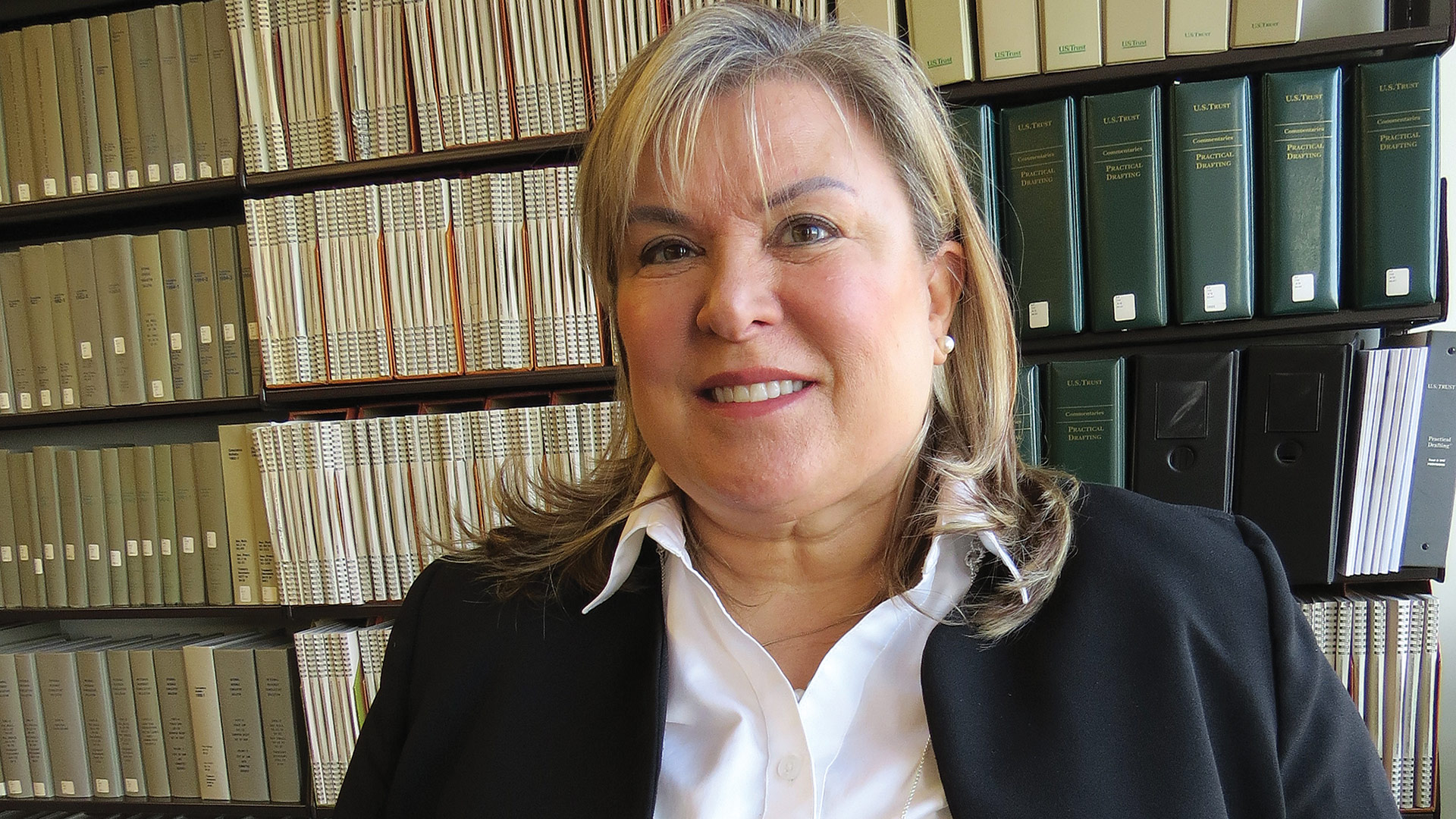 Betsey Quick says Bulkley Richardson’s hiring strategy has focused on seeking out law-school students who can make local connections and, overall, a commitment to this market.

In some ways, it competes with firms in New York, Boston, Hartford, Providence, and Worcester for talent, but its wage scale has always been significantly below New York and Boston and also well below those in those other cities. So, in some respects, this region doesn’t compete against those markets.

“What comes with practicing in this market is a lower salary — it’s a fact of life,” said Albano. “And a lot of times, when we do make offers to potential new associates, we can’t compete with the Boston and Hartford markets because, on average, a new associate can make a lot more money working in those arenas than they can in Springfield or Amherst or wherever.

“We’ve lost associates in the commercial practice group to Hartford,” he went on, estimating that salaries there are perhaps 20% higher than in Springfield. “And we don’t chase people — we say, ‘this is the offer, and it’s the same offer we’ve made to people that have been in your shoes, and they’re working here now.’ That’s one of the reasons why it’s hard to compete with those markets.”

Overall, the strategy has been to sell this market as a great place to live — and practice law — and to target (and in some respects recruit) candidates who want to be in this market and can commit to being here.

“We’re always looking for people who want to put down roots in Springfield,” said Gannon. “That’s a very important characteristic in all of the applicants we look at.”

“It’s tough to have someone from the Boston area come here knowing that the salary is going to be less,” he said, referring in this case to lateral hires. “But you try to impress upon these people that the cost of living is much less here. And we’ve seen both sides of the fence; we’ve had people that have worked in Boston come here and say, ‘I’d love to have a place where my dog can walk on real grass, have a fence around my yard, and not have to go to a skyscraper to go to work.’”

Quick, who handled aspects of recruiting for firms in Boston and Washington, D.C. before coming to Bulkley Richardson, acknowledged that the Springfield market is somewhat unique because of the lower salary ranges, underscoring the need, when it comes to entry-level hiring, to focus on law students who have or can create local connections.

As for those already in the profession, in this tight job market, the task of recruiting and hiring becomes more difficult because most people are working, said Gannon, and also because the companies they’re working for want to keep them. And it’s the same in the legal profession.

“Most of the people who want to be working are working, and because unemployment rates are so low, what employers have been doing for the past couple of years is doing whatever they can to retain good people,” he said, adding that this means law-firm managers as well. “This means higher compensation, trying to pay more of the lion’s share of employee benefits, offering more generous PTO [paid time off] policies, and letting people work at home, which is a big one for many people. People are happy where they’re working — most of them, anyway.”

As for those coming right out of law school, they certainly want to be happy where they work, and, given the current climate, they have a good chance of succeeding with that mission. One strategy for Western Mass. firms — again, one that businesses in other sectors employ as well — is to familiarize young people with the region and create a familiarity and comfort level that may help sway decisions when it comes time to find a job.

“We’ve been fortunate in that we’ve been able to hire bright, qualified individuals in law school, both at Western New England and UConn, to become law clerks at Bacon Wilson,” he said. “They work for us for a couple of years, and we can see the progress and the value, and quite often they’ll say, ‘I like this place, it’s like family; is there a job opening for us?’ And more often than not, we make one for them because we want to keep that type of talent on our page.”

Looking down the road is always difficult — especially when there is an unprecedented wildcard like the coronavirus. Indeed, law firms might soon be in less of a growth mode than they currently are.

But for now, and for the foreseeable future, the outlook is promising for business — if not for recruiting lawyers to the 413, necessarily. Whether the task is filling a vacancy in the estate planning or real estate department or finding a litigator — one who loves dogs or not — the assignment is becoming increasingly challenging.

And, like employers across the broad spectrum of business, law firms must respond proactively to this changing environment. 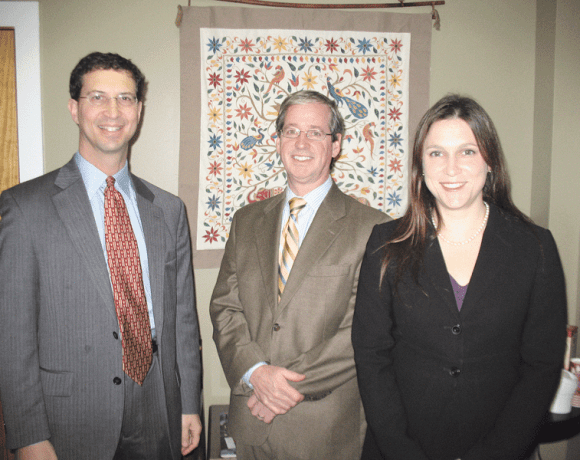 Rx for Trusts in Trouble

Coping with a New Reality