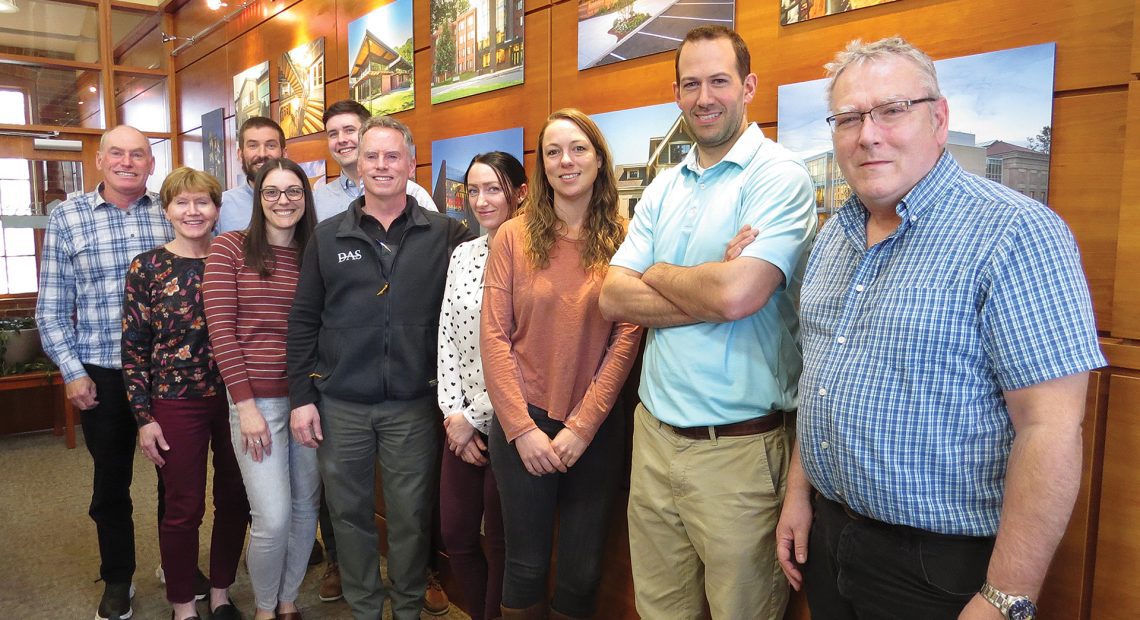 D.A. Sullivan Builds on a 125-year Legacy of Excellence

A Framework for Continued Growth 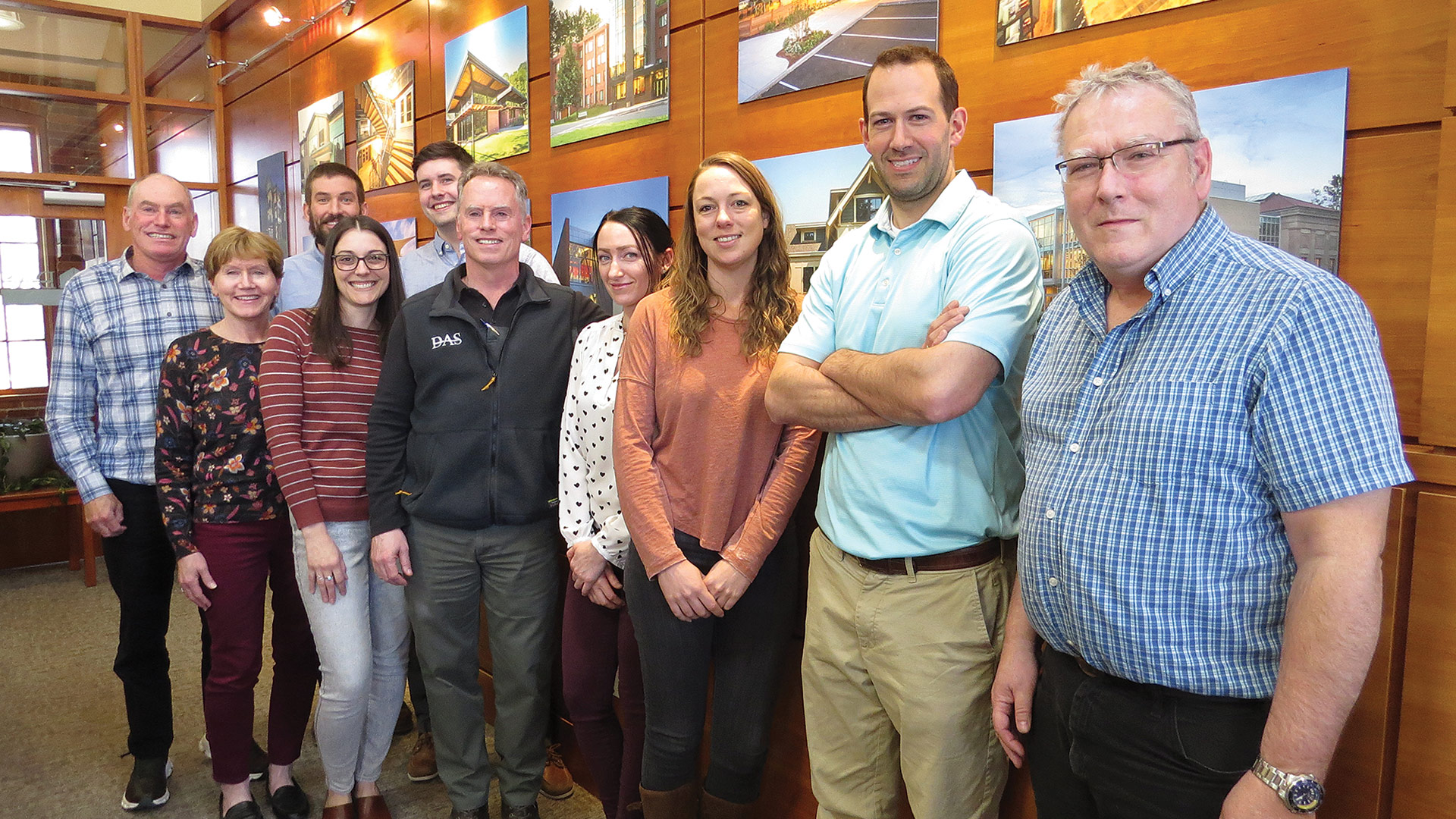 Mark Sullivan, center, with several members of the team at D.A. Sullivan & Sons.

It started with a few people building a home in Williamsburg in 1897. And over the past 125 years, the firm that came to be known as D.A. Sullivan & Sons Inc. has expanded in every way a construction firm can. Its vast portfolio of projects includes construction and renovation of schools, libraries, hospital facilities, dormitories, churches, and much more. While there are many keys to the success of the firm, it’s fourth-generation president says it all comes down to relationship-building.

Mark Sullivan knows the elements of a successful building — strength, stability, durability, to name a few. And he should know — he’s the president and executive project manager of D.A. Sullivan & Sons, a construction company in Northampton.

Sullivan also knows firsthand that these same elements are essential for a successful company.

While constructing schools, churches, municipal buildings, and more, the Sullivan family has built an enduring business with a strong foundation. Indeed, D.A. Sullivan & Sons is celebrating its 125th anniversary this year — a milestone that speaks to the impressive legacy the Sullivans have built.

The company was started by his great-grandfather, Dennis A. Sullivan (D.A.) along with his brother, in 1897. They worked mostly on houses in Northampton — the city they’ve been based in for the past 125 years. Initially the pair traveled wherever the work was, even as the company grew, but for the past 75 years D.A. Sullivan & Sons has concentrated its services from Pittsfield to Worcester. 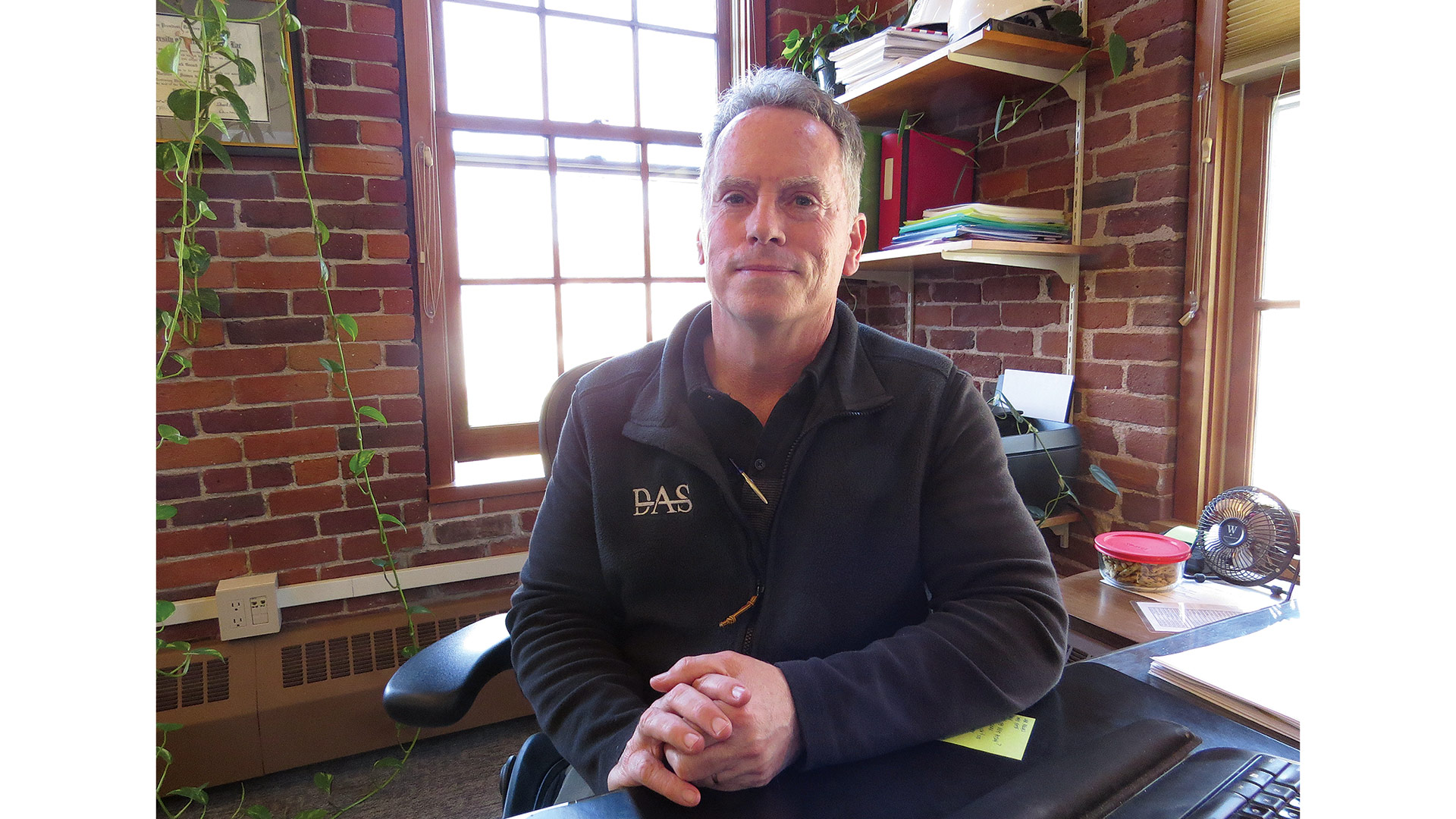 Mark Sullivan says that relationship-building has been the key to success for this family business.

Of course, the industry has evolved dramatically since the company started all those years ago — the nature of commercial work has changed considerably since D.A. Sullivan & Sons was established in 1897. Even in the 35 years that Mark Sullivan has been with the company, he notes that technology and efficiency have been ever-improving.

“It used to be that my brother and I would each run three or four projects, we had a secretary with us, and that was it,” he explained. “Now you’ll have teams of personnel for each project. You can have four or five people dedicated to a single project … it’s worlds apart from where we were 55, even 35 years ago,” Sullivan said.

And it’s not just the industry that’s been evolving and growing.

D.A. Sullivan & Sons has also grown considerably, now having more than 50 employees. However, it’s important to note that there are certain elements to the company that have not changed, even after all this time. The firm continues to be a community-oriented family business, and it is still equally as committed to maintaining close relationships with its clients as it was over a century ago.

“Because we’ve been around a long time and we’ve worked with almost every municipality in Western Mass, we have long-standing relationships with a lot of the private colleges and schools in the area,” Sullivan told BusiniessWest. The Eaglebrook school in Deerfield, in particular … that relationship is three decades old. It culminated a few years ago in their new science, art, and music building, which was a signature project on campus. That was a lot of fun.”

For this issue and its focus on the region’s construction sector, BusinessWest looks at the 125-year history of D.A. Sullivan. Along the way there has a been a good deal of that fun that Mark Sullivan described, but mostly hard work, attention to detail, lots of that relationship-building, and adding on that solid foundation that was put down when William McKinley was roaming the White House.

Just a quick look at the portfolio of completed projects on the firm’s website provides some deep insight into the diversity of work the company has taken on in recent years and some perspective into how it has changed the landscape in the region — figuratively, but in some cases, also quite literally.

Indeed, the firm handled the recent project to renovate Springfield’s Pynchon Park, which links the downtown to the Quadrangle area. It also took on a massive renovation of Chicopee’s historic City Hall, a project that included rehabilitation of the auditorium, exterior work on the main building, and renovation to the existing clock tower and numerous stained windows. 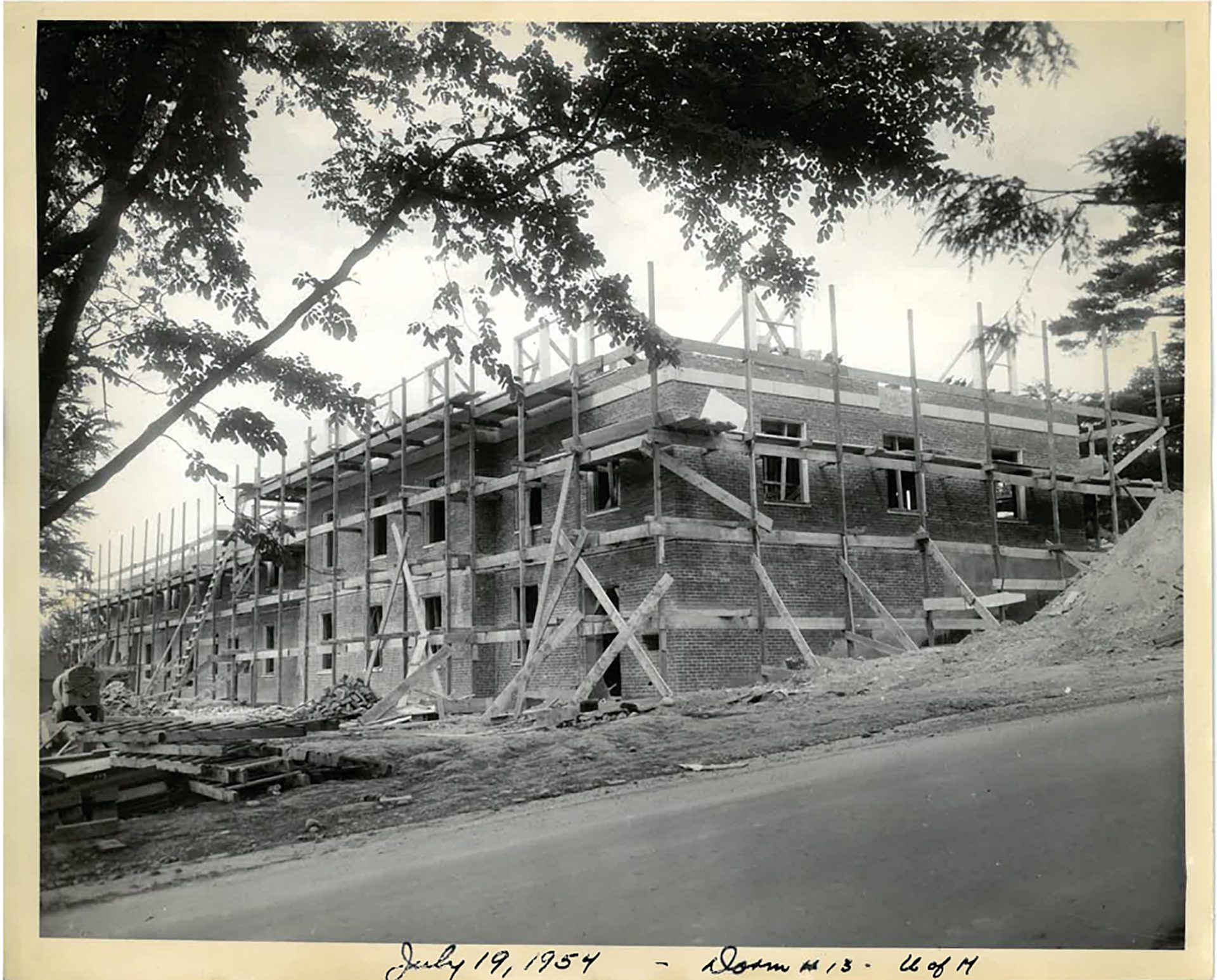 D.A. Sullivan & Sons has been changing the landscape at UMass Amherst for decades, including this dormitory built in the 50s.

Meanwhile, the firm also took on projects to renovate the Worcester Public Library, Gamble Auditorium at Mount Holyoke College, the Fitness Center at Mass. College of Liberal Arts, and the 646-foot-long Fine Arts Center Bridge on the UMass Amherst campus, a complex undertaking that ultimately created more space for the Art, Theater, and Music departments.

Going back further, the portfolio includes projects (some could be called landmarks) such as the Blake Arena on the campus of Springfield College, the Springfield Materials Recovery Facility, Northampton’s new post office, Westfield High School, and countless others.

“Because we’ve been around a long time and we’ve worked with almost every municipality in Western Mass, we have long-standing relationships with a lot of the private colleges and schools in the area.”

Perhaps the best example of this is UMass Amherst. Indeed, one of the firm’s longest-standing relationships is with the university, said Sullivan, noting that the firm built 12 of the original 13 dorm buildings there, several other buildings, including Curry Hicks Cage, former home to the basketball team, and is still working with UMass today.

“I just came back from the previously mentioned Newman Center at UMass, which is a new facility for the Springfield Diocese,” he noted. “We haven’t built a church in a couple decades, so that’s been an interesting project.”

This relationship with UMass, one of many that go back 40, 50, or more years, explains why D.A. Sullivan is able to celebrate 125 years in business, and why five generations from the family have worked there.

“We’re a fifth-generation firm, which is incredibly unique. I believe we’re Northampton’s oldest firm,” said Sullivan. “We’ve just been here a long time and it’s crazy to think that my brother and I have been working for more than 35 years,”

Of course, maintaining such an accomplished family legacy comes with a daunting amount of responsibility. Not only do the projects themselves present challenges, but there is the added stress of each new generation keeping the company alive.

“We’re starting to think about that next leadership group coming behind us, and hopefully they’ll shepherd the company to the next century,” Sullivan said, “There’s a certain pressure to keep it going and not screw up on my watch, but we’ve been thankful throughout the years for the relationships we’ve had and the project’s we’ve built. We’ve got great people. More than anything, the people that work for us and with us, have enabled us to stick around for as long as we have.”

The team at the firm is consistently adding to that already large and diverse portfolio of projects with a number of current initiatives.

This is an effort to stimulate economic development in the city by renovating a collection of abandoned mill buildings, said Sullivan, adding that the One Ferry Project has been and will continue to be a very important project for Easthampton and the surrounding area.

“It’s a build-out of a campus of old mill buildings, and we’re on phase two right now, which is Building 5,” he explained. “We’re looking toward phase three, which is either a renovation of Building 7 or new construction of a new facility next to the mill building.”

He told BusinessWest that the mill area has been a blight on Hampshire County for many years, and D.A. Sullivan & Sons is working with One Ferry Project developer Mike Michon to write an intriguing new chapter in the history of the property.

D.A. Sullivan & Sons is also currently providing general contractor services for the construction of a new library building in Greenfield, a project that started last fall. Sullivan said this is the type and size — $5 million to $35 million — project the firm specializes in.

As it turns 125, D.A. Sullivan obviously has quite a bit to celebrate — a glorious past, a solid present, and a promising future with new milestones to mark.

History in the Making

As noted earlier, the images on the company’s website and the photos in its vast archives tell a story.

Its main theme is one of longevity — 125 years is a milestone in any business — but it’s really about the forces that made such longevity possible — excellence, perseverance through the tough times (and there were many of them over the years and the decades), an ability to change with the times, and enduring relationships with scores of clients.

And the best part about this story is that there are many chapters still to be written. 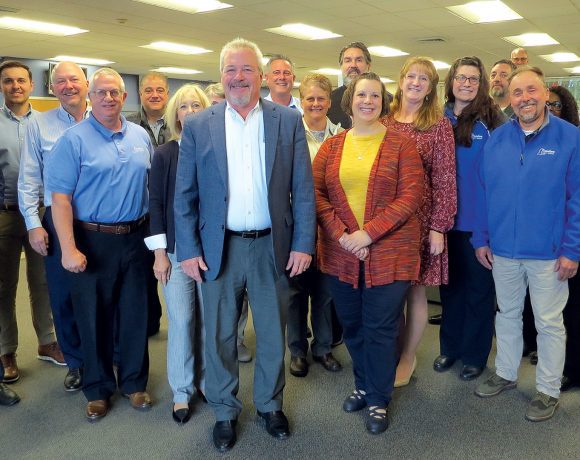 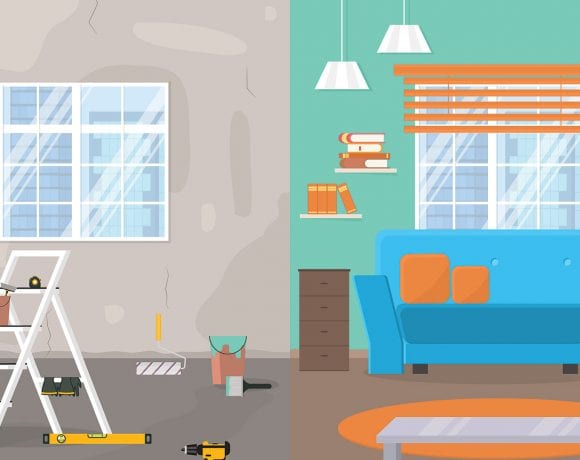 How to Remodel Your Home Safely During COVID-19