Sarat Ford Lincoln Has Been a Long-running Success Story 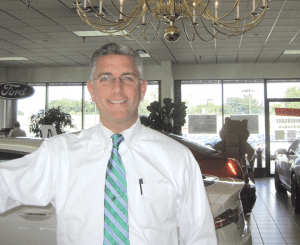 Jeff Sarat says that taking risks has been a family tradition and will continue to drive their future success.

Jeff Sarat says his family’s lengthy history in the auto business — now approaching 85 years, with three generations of leadership — has been marked by what he called “calculated risk taking.”

And as he talked about manifestations of that operating philosophy, he pointed to the ceiling of the family’s Ford and Lincoln dealership on Springfield Street in Agawam, which he serves as president, and, more specifically, the chandelier that dominates it.

The ornate lighting fixture has come to symbolize what was a huge risk undertaken by his father, Jack, in 1989. As he retold a story he’s relayed often, Jeff said that his grandfather, John, who segued from farming into selling and servicing cars in 1929 and kept a firm hand on decision making within the family business, strongly opposed his son’s plans to expand the dealership across Springfield Street from where it was started.

But Jack pushed ahead with the plan anyway.

“My father had to have the steel delivered at night so my grandfather wouldn’t know,” Jeff recalled. “When the project was done, my grandfather walked in the building, saw that chandelier, and said, ‘Jack, you built a classy place.’ That was his seal of approval.”

There have been many other examples of successful risk taking over the years, from the Sarat’s family’s expansion efforts into Enfield and Northampton — with Ford dealerships operated by Jeff’s brothers, Chris and Scott, respectively — to aggressive expansion into the commercial truck market (more on that later), to recent endeavors, such as a 10,000-square-foot expansion of the Agawam dealership for a service and repair facility that is truly state-of-the-art.

And there are more on the drawing board, especially construction of a dedicated showroom for the Lincoln car line, with construction slated to begin later this year on the site of the now-closed Taylor Rental facility next door to the Agawam dealership.

Such moves represent risks, but they are becoming increasingly necessary in what is a changing, ultra-competitive auto-sales sector, said Jeff, who shares his father’s and grandfather’s entrepreneurial tendencies and drive for continual expansion.

“We’re always trying to grow the business and make it bigger and better,” he explained. “We’re consistently a top-10 dealer, but I’m not really happy with top 10 — I want to be number one.”

For this issue and its focus on auto sales, BusinessWest turns the spotlight on the Sarat family, their expanding auto group, and their plans to continue that pattern of taking calculated risks.

The stock market crash of 1929 was just a few months away when John Sarat, who loved to tinker with the cars being serviced at a local gas station when he wasn’t tending to his vegetable farm, decided to purchase his own gas station in Agawam with a partner.

That venture became increasingly focused on sales, said Jeff, noting that, as the economy went into prolonged freefall, his grandfather had to buy out his partner and somehow slug it out during the Great Depression as a sole proprietor.

He persevered, and his name was still over the door when the next generation, represented by Jack Sarat, started working at the dealership while in grade school, developing a passion for the industry in the process.

“My father never wanted to do anything else,” said Jeff. “He grew up on the lot, pulling weeds, plowing snow, cleaning off the cars … and we were raised the same way.”

The ‘we,’ in this case, are the three members of the third generation who have become involved in the family business — brothers Jeff, Chris, and Scott.

Jeff, the oldest, remembers snow days when the three were in school; before the classmates would head for the sledding hills, they would ride with their father to the dealership to plow and shovel snow, move cars, and handle myriad other assignments.

Along the way, they developed a similar passion for the business and a desire to make it a career.

“Before we built this building in 1989, my father essentially polled us,” said Jeff. “He said, ‘before I go out and spend all this money building a new building, do you guys want to get into the business?’ And we all said ‘yes.’ I was about 14 at the time.”

Today, Jeff Sarat is taking a leadership role in another round of expansion and risk taking that started with a 10,000-square-foot expansion of the service and repair facilities, that gives the Agawam dealership the room and the flexibility to service almost anything on wheels.

“We designed it with six lifts that enable us to pick up anything from a Ford Focus to a Ford school bus or a motorhome — that’s up to 72,000 pounds,” said Sarat, adding that, in response to both recognized need and trends within the industry, the new facility was designed to maximize efficiency and thus save time  and money.

Elaborating, he said the large service bay allows two technicians to work on three lifts each, which means that if a part for a car on a lift is delayed, the technician can move on to the next job on the neighboring lift and not waste time switching vehicles.

“This is unheard of in this industry,” said Sarat. “Nobody gets three bays, especially three monstrous truck bays.”

And such large bays are needed, he went on, because of the company’s growing base of commercial truck sales, which represent a whopping 50% of the dealership’s revenue. This track record for excellence in that category dates back to 1997, when Jack Sarat had an opportunity to purchase 100 heavy-duty pick-up trucks, which represented the last of Ford’s inventory for that model year. With no model changes on the way for 1998, and a more expensive truck with a smaller rebate due in 1999, Sarat’s inventory was soon in demand, and many of those who bought then have become repeat customers.

“They sold like crazy, and by selling those ’97s, we earned more allocation [future new truck allowance per dealership] than anybody ever could,” Sarat explained. “And now we have people come from all over New England because we’ve built relationships; they know we have the trucks they want, and we service them, too.

“Those buyers are a very loyal buyer,” he went on. “You start that relationship with one truck, and before you know it, within a few years, as their business grows, you’ve sold them three, four, or five trucks.”

Next on the to-do list for the company is construction of a new showroom for Lincoln, said Sarat, adding that the dedicated dealership is reflective of another trend in the industry, as carmakers are demanding new and better facilities in which to showcase their specific models.

The new, 20,000-square-foot facility should help Lincoln build brand awareness and counter not only stern foreign competition in the luxury-car category, but also a surging Cadillac, which saw a 33% increase in sales last calendar year.

Lincoln was a hugely popular luxury model decades ago, but has lost significant market share, mostly to the foreign competitors in recent years, and is looking to recapture its place at the top of that category, said Sarat.

“Lincoln is going though a bit of an identity crisis, asking, ‘what do we want to be?’” he told BusinessWest. “They’ve created some new and exciting models and taken some gambles with the Lincoln MKZ. They’ve come out with some new products, and hopefully, Lincoln can regain what it once had. But it’s going to be a tough battle.

“And the new buildings are part of that,” he went on. “You need to make investments in these facilities. The buyers are coming to expect a certain level of size, quality, and convenience, and that’s why we’re separating the two buildings, to give them a unique experience.”

As the company remodels both the dealerships in Agawam, Sarat said, it may face a quandary of sorts.

Indeed, there is speculation that the chandelier may not fit with the style and image that Ford is trying to project with its showrooms. In short, its days might be numbered.

If they are, the company will lose a small part of its identity, but there are still plenty of other examples of the calculated risk taking that have enabled this venture to survive and thrive for 85 years.

And there are more to come. 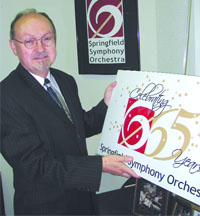