Despite Rough Start in Division I, Optimism Abounds for UMass Football 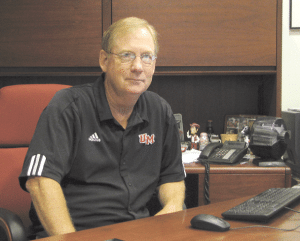 John McCutcheon says the move to Division I doesn’t come without risk, but the potential rewards are great.

That’s not a record many football teams would celebrate, but the UMass Minutemen see the 2012 campaign differently: as a floor from which there’s nowhere to go but up.

After all, this was a squad coming off a down year in 2011, then moving to the Mid-American Conference (MAC) and competing for the first time in the Football Bowl Subdivision (FBS), also known as Division I.

It was a move, John McCutcheon said, that was a long time coming.

“The level at which we participate in football has been talked about on this campus for probably 25 years,” said McCutcheon, athletic director at UMass Amherst. “Several studies were done, all of them, for the most part, saying the same thing: as the state’s flagship campus, UMass football should be positioned at the highest level, just like we’ve done with basketball, hockey, and other sports.”

To accomplish that goal, he went on, the school had to find the right conference, tackle some significant facility improvements which sent the team to Gillette Stadium in Foxboro for home games (more on that later), and put together a long-term financial model that made sense.

“As with any decision of this magnitude, many agreed with this — obviously, we presented it to the trustees, who supported it unanimously — and some didn’t,” McCutcheon said. “We understand that, and that’s a healthy process. There are folks following this who want to see how we are doing with this transition. We take that seriously. It’s a big move for us and does not come without risk. Our job is to make sure we manage this as efficiently as possible, and that’s what we’re trying to do.”

John Sinnett, assistant athletic director, added that UMass is widely known for its educational offerings and research prowess, and the rest of its athletic department is regarded at a similar caliber. “To have football stuck in the I-AA level wasn’t accomplishing much for the mission of the university.”

The move to Division I, he noted, offers income streams that don’t exist at the I-AA level, specifically bowl and television revenue. Meanwhile, “with all the conference realignment that has gone on, this move is also geared toward the next 20 years, not just right now. It could lead to an opportunity to be in a larger conference that has more financial benefits for the university. So this is a multi-layered, multi-decade project.” 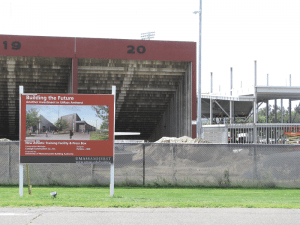 McGuirk Stadium on the UMass campus will be ready for Division I play in the fall of 2014, when home games will be split between Amherst and Foxboro.

Right now, however, Head Coach Charley Molnar’s team has more immediate goals, such as improving on that one-win season and drawing larger crowds to Gillette while the on-campus McGuirk Stadium continues to undergo extensive renovations. As BusinessWest discovered, hopes are high on both fronts.

Moving the Minutemen to the FBS made so much sense, McCutcheon said, that many casual sports fans thought they already played at that level.

“The irony is, outside of Massachusetts, most people in the country thought we were Division I already, and they were surprised when they learned we were I-AA, because of the perception of our men’s basketball presence. And being the state university for Massachusetts, it’s probably where we should have been.”

The team slated its non-conference schedule ambitiously, but regional rival UConn shut the Minutemen out 37-0 in week one, followed by 45-6 and 63-13 losses, respectively, to the Big Ten’s Indiana and Michigan, the latter a top-20 power. The games got more competitive during the MAC portion of the schedule, including a 22-14 triumph over winless Akron, but the final tally was still 1-11.

Sinnett noted that, while FBS universities can offer 85 football scholarships, compared to 64 in I-AA, the only players specifically recruited as Division I prospects were freshmen in 2012. Over the next few years, that number will rise, while each class of FBS recruits gains in experience, so, theoretically, the team should show marked improvement each year.

“You’re going to have a culture of athletes who understand what it takes, understand what the competition is like, who are better-suited mentally and physically to play at that level of competition,” he said. “But there’s still a learning curve.”

“Remember,” added McCutcheon, “those scholarships go to incoming freshmen. In football, it takes awhile for a freshman to mature physically and contribute on the field.”

He added that Molnar has made an effort to recruit from both inside and outside the Commonwealth.

“Charley has put great emphasis on recruiting the state of Massachusetts; he’s doing a great job keeping players close to home. But we know that, for any program to compete at the national level, you have to reach beyond the immediate boundaries. That’s true for all schools. Kids from New Jersey don’t necessarily want to stay in New Jersey, and Massachusetts kids don’t always want to stay in Massachusetts. Some recruits are looking for a more urban situation, and some, a more rural situation. We all have strengths and weaknesses, and for each recruit, we’re trying to match up with their needs.”

Sinnett said the program will do a better job meeting its financial projections this year as well, because for the first time, it will share in bowl and television revenue from the MAC, and road games against Wisconsin and Kansas State will reap the program $900,000 and $750,000, respectively. Other high-profile, big-payout road games have been scheduled for the next several seasons as well, including Penn State in 2014 ($850,000), Notre Dame in 2015 ($1 million), and Florida in 2016 ($1.25 million).

“Any time you do long-range forecasting, you have to make adjustments as you go along which reflect real life,” McCutcheon said, noting that TV and bowl revenues and the aforementioned road payouts will be higher than originally anticipated, while corporate support of the program has some room for improvement. “Our projections of increased revenues are significant, and I think that, overall, we have a very solid financial plan for the future.”

Plans to improve home-game attendance, meanwhile, are equally crucial, if not moreso.

UMass struck a five-year deal with Gillette to host games there to accommodate the McGuirk renovations, which include a new press box, visitor boxes, training facilities, and handicapped-access upgrades, all required by the NCAA for Division I programs. McGuirk will be ready for action in 2014, and for that season through 2016, home games will be divided between Amherst and Foxboro.

“The concept was originally misunderstood by many,” McCutcheon said. “Some people thought we were leaving [McGuirk] and never coming back. That was never the intent.”

But playing home games 100 miles from campus posed real issues last season, when attendance at Gillette averaged under 11,000 per game. That’s a concern, because the NCAA requires FBS schools to average 15,000 spectators per home game at least once every two years; if it doesn’t meet that goal, the school is ineligible for a bowl game the following year and is placed on probation for a decade.

But there is reason to believe average attendance will reach 15,000 this season, Sinnett said. For one thing, UMass was stuck last year playing the day after Thanksgiving — a MAC tradition, but a tough draw. The Minutemen played in front of just 6,000 fans that afternoon, but they will not host a Black Friday game this year, which should boost their per-game average.

Also, he noted, “we have more name-brand teams — we’re bringing in Vanderbilt, an SEC team which went to a bowl game last year. People will be excited to see that. Maine will bring in a lot of people. And I think the team will be better this year, which helps.” Group sales, corporate partnerships, and season-ticket sales are all on the upswing, he added.

Looking down the road, “we feel pretty confident in future home games against UConn and BC. Those regional rivalries will help attendance,” Sinnett added. In fact, UMass would like to develop a tradition of playing non-conference games against those regional players, as well as New Hampshire and Rhode Island, to cultivate a culture of New England football that will benefit all the schools.

Meanwhile, McCutcheon praised the atmosphere and amenities at Gillette. “The facility itself is state-of-the-art; you’re not going to find a better venue. Also, it’s very close to a large percentage of our alumni base. More than 100,000 alumni live within a half-hour of Gillette, while 20,000 live within a half-hour of Amherst. We’re basically getting closer to our alumni.

“The challenge is, a lot of these folks haven’t been engaged with our program, being in the eastern part of the state, so we’re trying to make them more aware of what we’re doing, more invested in the program,” he continued. “It takes some time to get into people’s heads. We realize the Boston market is a tough market — it’s traditionally pro-oriented — and we’re going to have to pick away at it and carve out a niche.”

Sinnett agreed, noting that “people who went to games at Gillette really enjoyed the experience. People who sat in the club seats really loved that atmosphere.”

When the games start rotating in 2014, he noted, UMass football will be serving two distinct fan bases — Boston-area alums and fans who enjoy visiting Gillette, and students and fans in and around Amherst who love the pageantry of on-campus games and the tradition of McGuirk.

“Having that flexibility will really help us,” he told BusinessWest. “Say we have a big game against UConn or BC; we can do that at Gillette, and we can shoot for 30,000 to 40,000 fans. If it’s a midweek game on ESPN against a team from the MAC, we can play that at McGuirk. I think families in Eastern Mass. will love the games at Gillette, love the amenities, love the experience, while Western Mass. fans might not want to travel to Gillette, because that’s a long day. It adds a lot of flexibility for fans.”

McCutcheon repeatedly emphasized that, from a timing perspective, the move to the FBS was a good decision.

“An opportunity with the MAC came forward, Gillette solves our immediate facility needs, and we felt, looking at all those things, the financials made sense for us,” he said. “The road we are on now is more challenging. We never said football would be 100% self-supporting; no sports are. But we felt that it would be more self-supporting [in Division I] than it would be otherwise.

“We think it was the right move to make,” he concluded. “I still believe that 100% today. But it’s going to take some time and effort. Coach Molnar is making progress, but it takes a little time; it doesn’t happen overnight. There are no shortcuts. You have to stay committed, stay focused, but I do think, in the long run, it will be a great opportunity for our university.” 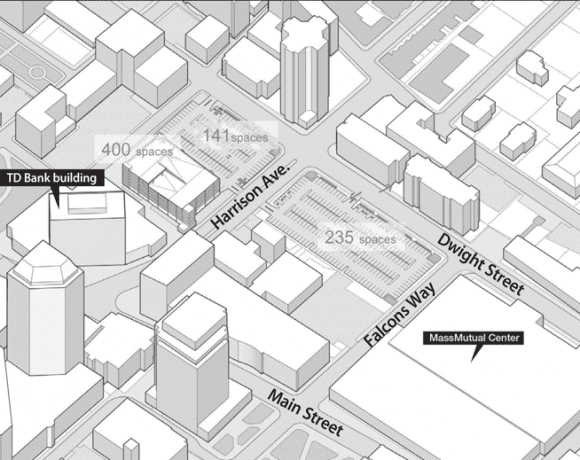