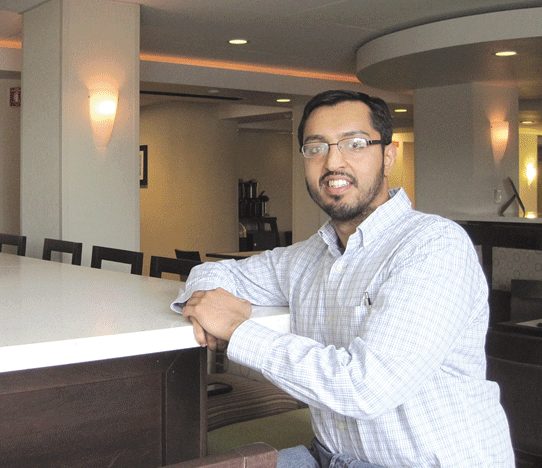 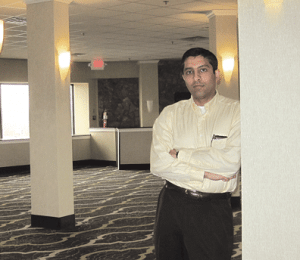 Shardool and Kishore Parmar, president and vice president respectively of the Pioneer Valley Hotel Group (PVHG), understand that they have two sizeable challenges when it comes to the property at 711 Dwight St. in Springfield.

The first is to get people to stop talking about it in the past tense — a still-common practice, especially when it comes to the rotating restaurant on the top floor that was once a major destination in the region — and using one of the names that used to be on the building, especially Holiday Inn.

The second is to convince several constituencies, from families to business travelers to event planners, to embrace the new name over the door — LaQuinta Inn & Suites — as one that represents both quality and an attractive option to the deep roster of other players in the local hospitality sector.

And the brothers Parmar believe that a recent $4.5 million renovation project, one that accompanied the new brand name on the landmark — will go a long way toward tackling both.

Indeed, the Parmars say they’re already noticing that while some people still talk nostalgically about the revolving restaurant, named Top o’ the Round, and how they had they had their high school prom there, many more are now talking about the new Mount Tom Ballroom, carved out of the space once occupied by the restaurant, and its stunning views of the Connecticut River and the Springfield skyline.

Meanwhile, they say the facility is catching the eye of event planners, some of whom are still getting quizzical looks, and more, when they reveal their choice for the company’s next function.

“Just recently, we’ve had meeting planners go back to their superiors after booking here and the superiors say, ‘there’s no way we’re going to book over there; are you crazy?’” he said with the laugh. “But they haven’t seen the space.”

Those who have generally report a facility that’s much brighter than the old Holiday Inn or, later, the Inn Place or CityPlace Inn and Suites, and also more customer friendly.

“This is probably one of the nicest looking LaQuinta hotels you’ll see in the whole country,” said Shardool. Indeed, PVGH recently won the Best Conversion award for all LaQuinta Inns & Suites in the U.S.

The Parmars realize that while they’ve made some progress with those aforementioned challenges, real success will take time and energy. It’s an assignment they embrace as one of the more visible components of a growing hospitality chain that also includes facilities in Ludlow and Hadley.

For this issue and its focus on meetings and conventions, BusinessWest toured what had been the forgotten hotel in Springfield, and gained a sense for what could happen next for this intriguing slice of the city’s skyline.

His two young sons essentially learned the hospitality business from the ground up at the motel, handling a number of odd jobs, from changing beds to cleaning bathrooms to tackling landscaping duties. And their learning opportunities multiplied as their father eventually came to preside over a hotel group that now also includes two facilities in Hadley, the Hampton Inn and Comfort Inn; and the Comfort Inn in Ludlow, which will soon change over to the Holiday Inn Express name in April.

Shardool and Kishore both enjoyed hospitality, but pursued degrees in engineering, and took jobs in related fields. A chemical engineer, Shardool worked in the biotech industry, while Kishore, an electrical engineer, worked at a Boston-area provider of information technology services.

They returned to the family business, however, when their father suffered a second stroke in 2005. And they took what they learned in the engineering field with them, skills and knowledge that have helped them shape decisions that have enabled the hotel chain to continue growing.

“If you look at the greatest CEOs in business history, most of them were engineers,” Shardool explained. He referenced Jack Welch, the former chairman of General Electric, who was a chemical engineer, and former Coca-Cola chairman Roberto Goizueta, a Cuban immigrant and also a chemical engineer.

“Engineers are good in business because we can quickly identify problems, and we have a great understanding of the mechanics of a business, not in the sense of equipment, but in the sense of what steps and what procedures need to take place to achieve the right outcome,” Shardool explained. “So when it comes down to making sure that rooms are clean, we don’t just take somebody’s word for it, we verify it.” 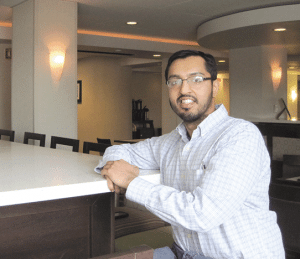 “The worst thing you can do is let a problem linger,” he said. “And engineers hate problems that linger, we want solutions, very quickly.”

These attributes and attitudes certainly came into play as the Parmar brothers first assessed the risks and opportunities involved with the former Holiday Inn, and also with moving forward after they eventually triumphed in the competition to acquire the property from the company that was operating it in receivership.

While all those who looked at the facility saw a property in a advanced state of decline, the Parmars saw something else — what Shardool described as ‘great bones.’

“We saw what happened to the hotel more as neglect, and lack of good management than anything else,” said Shardool. “We essentially had an idea of what we wanted here, but it takes time.”

One of the first priorities for the new owners was to rebrand a facility they had already been renamed the CityPlace Inn and Suites. What ensued was in-depth research into national franchise options, and analysis about what might work within the Greater Springfield market.

This research eventually focused on LaQuinta, a name and a chain that is far better known in other regions of the country. What the brand offered was a reputation for quality (at least in those markets where it’s a known commodity), and an opportunity to succeed within a specific niche — a lower-priced product that appeals to those who don’t want or need all the amenities of a full-service hotel.

But what it lacked was name recognition in the 413 area code.

Once they had zeroed in on the LaQuinta brand, the PVHG began formalizing what became a $4.5 million renovation, funded in part by a $2.5 million loan from the U.S. Department of Housing and Urban Development (HUD) and a secondary loan from NUVO Bank & Trust Company, along with PVHG’s own funds.

The motivation for the massive undertaking was to change the look, feel, and attitudes concerning the property, said Kishore, and the LaQuinta chain facilitated these efforts by providing a great amount of flexibility, or individuality when it came to design elements and overall layout of the facility.

“Our goal from the beginning was to have as few walls as possible,” added Shardool, adding the desired effect was a much brighter, far more modern, more customer-friendly facility, from the front lobby to the 12th-floor facilities, and the two brothers believe all that has been accomplished.

The hotel now offers 182 rooms, down from the original 207, and 28 suites, said Kishore, adding that the work was phased in to enable the facility to remain open during the rehab process. The Parmars would close down two to three floors to gut and renovate, while the other floors remained open for business.

The bright, contemporary, open design that allows people to move more freely through the hotel has generated strong word-of-mouth referrals, said the brothers.  Moving the complimentary breakfast down from the dark and cramped top floor to the main lobby area has allowed the staff to meet the customers during breakfast or at the comfortable bar with it’s lime green pendant lamps and stylish, geometric design bar-height chairs.

On the 12th floor what had been three rooms has been transformed into one large function area, renamed the Mt. Tom Ballroom, which comfortably accommodates 260 people for sit-down functions, and 400 for cocktail events. The Summit Room, also on the top floor, can be split into two separate rooms and can hold up to 80 seated guests and 200 for cocktail functions.

Starting from essentially scratch, sales staff at the hotel report considerable interest in the 12th floor’s facilities, with a number of events already booked.

Mint on the Pillow

Recent increased national advertising by LaQuinta has helped famililiarize people in this region with the brand, but the Parmars acknowledge that many still don’t know about their facility or its extensive renovations.

They hope to change all that through strong word-of-mouth marketing, and by creating positive experiences for those who choose what amounts to Springfield’s newest hotel.

“LaQuinta has a good leisure following, nationally, and Springfield is predominately a leisure and sports type of customer,” said Shardool. “The business market is not as strong in Springfield, but the hotel market is changing, and we know, it just takes time.”

And in time, they believe far fewer people will be talking about this landmark with the past tense. 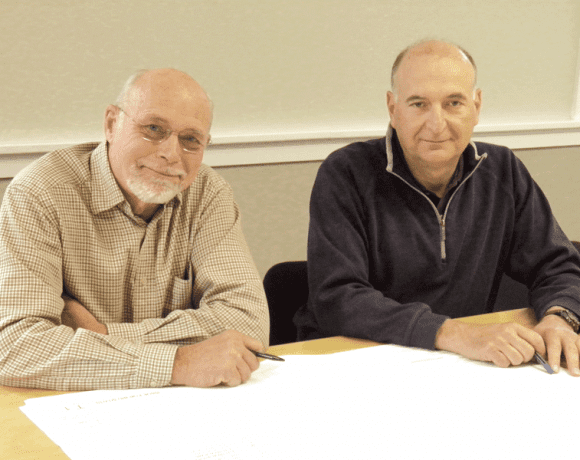