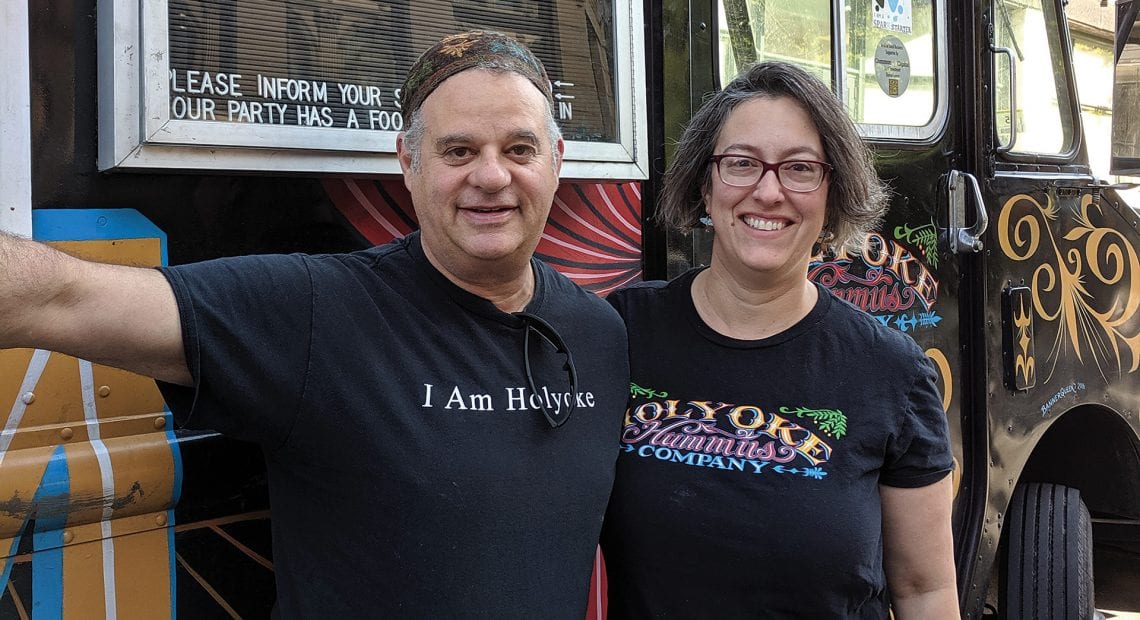 Food Trucks Grow in Popularity — and Evolve in Intriguing Ways 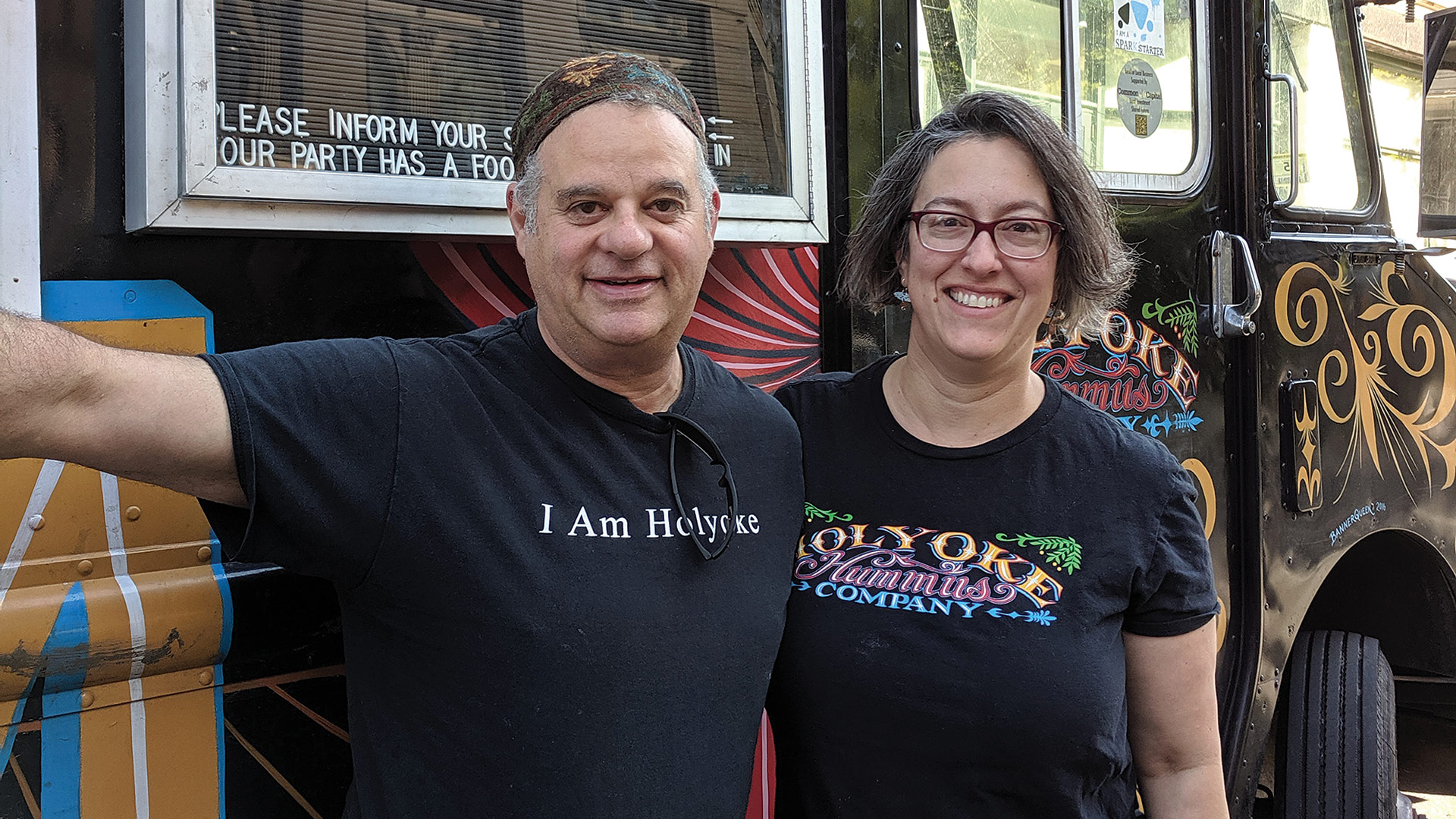 As the operator of one of the region’s more popular food trucks points out, food-truck culture in the Pioneer Valley is different than it is in metro areas like Manhattan, where the trucks are a constant street-corner sight. Here, they’re more common at fairs, music festivals, and community gatherings, in addition to city streets. And a few have morphed into brick-and-mortar locations as well, which operate in synergy with the mobile kitchens, giving patrons even more opportunities to experience new tastes.

John Grossman has told the story often about the year — it was 2013 — he attended the Holyoke Brick Race, an annual stock-car event in the Paper City. Organizers arranged for food vendors, but none showed up.

“I had been traveling to New York for work, and I was used to seeing falafel trucks on every other corner, and I really wanted to see food like that here,” he recalled. “I told the mayor, ‘next year, I’m going to be here with a falafel cart.’ He said, ‘go ahead, John, you do that.’ That’s all the inspiration and shoving I needed. Our first gig was the race a year later.”

Grossman calls his food truck the Great Garbanzo, and has since added a smaller trailer called the Little Chickpea. He and his wife, Dawn Cordeiro, have turned their enterprise, Holyoke Hummus, into a staple at events like Food Truck Fridays at MGM Springfield and Abandoned Building Brewery, as well as community events, music festivals, and other gatherings across the region, like last weekend’s Run the Runway 5K at Westover Air Reserve Base.

Festivals and other public gatherings have been key to the success of most regional food trucks, he said, as opposed to places like Manhattan, where they’re a constant sight on city streets.

“There isn’t the urban density to support food trucks” lined up along streets, he noted, adding, however, that MGM and others have done well to create buzz around weekly food-truck events.

“It’s not the people in the casino coming out to that; it’s the people who work downtown who say, ‘hey, there’s a bunch of food trucks,’” he told BusinessWest. Making food trucks a regular sight along city streets outside of festivals and events, he added, requires permitting and parking tangles that can be difficult to navigate, although many have done so in Western Mass.

Bop is cooked rice molded into a bun and grilled; it’s the foundation for her Bop Burger, a seasoned rice bun with dry seaweed sprinkles, sauteed kimchi, and pork, beef, or chicken in between.

“It’s a tough business, but exciting. It’s a good way to get to know people,” she said. “During the warm season, people want to go outside to eat, or have an outing with their employees, and the food truck can go anywhere — in a field, in a park.”

At events, she added, “so many restaurants come with a tent to set up, and they take quite a while, but with the truck, we can set up within 10 minutes and start to feed people.”

Her authentic Korean street food soon developed a following, but there was a problem: what to do during the cold months?

“We had a long break during the winter, from November through April, when we closed. Food-truck season is quite short — maybe two-thirds of the year — and I felt like people might forget about us during the winter. I felt like we were starting our business over every spring,” she said. “But with a restaurant, we could stay connected to people. They could keep coming back to the same place and remember us.”

So, two years ago, she opened a Sun Kim Bop restaurant on Main Street. And she’s not the only one who turned mobile success into a storefront; Holyoke Hummus opened its restaurant on High Street, across from Holyoke City Hall, two years ago, starting with lunch service and adding breakfast this past January. 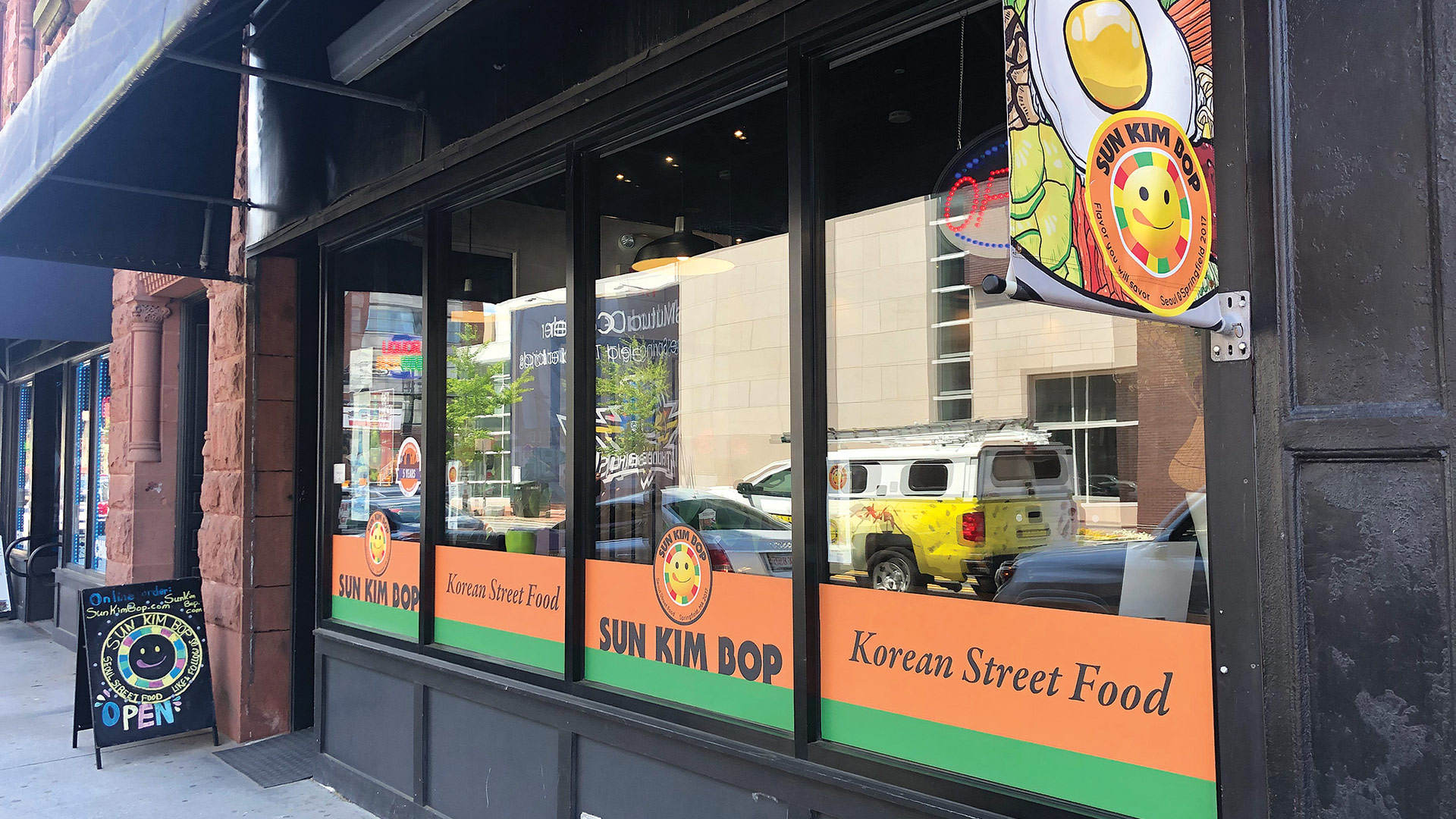 Sun Kim says her restaurant patrons will often seek out the food truck, and vice versa, bringing synergy to her two-pronged business.

For our annual Restaurant Guide, BusinessWest checks in with a few local food trucks, and learns how that model has evolved for them, or will, into brick and mortar sites that coexist along with those kitchens on wheels.

Jake Mazar and Will Van Heuvelen both come from a farming background, and both worked at Brookfield Farm in Amherst when they got an idea.

“Will’s background is in cooking and baking, and mine is in business management,” Mazar said. “But we both came to the Valley to pursue agriculture and had a passion for local food.”

Brookfield Farm had no commercial kitchen, though, and the pair wanted to take their food passions further. So they launched a food truck called Wheelhouse. 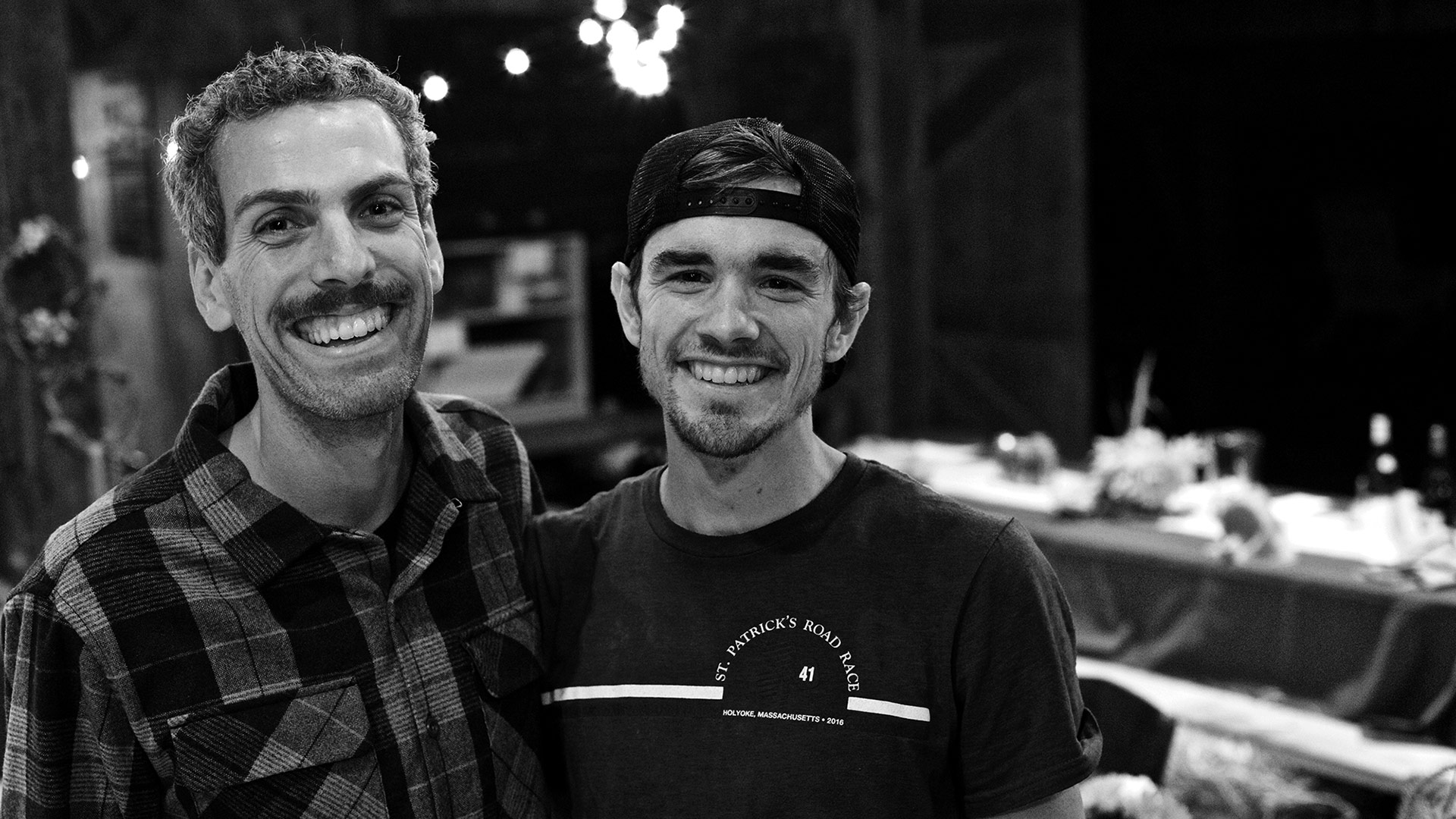 Jake Mazar (left) says he and Will Van Heuvelen want to take concepts that resonate with the agricultural movement and make them more accessible to the public.

“We wanted to take a lot of the same concepts that resonate so strongly with the local agricultural movement and make them more accessible to the public,” Mazar explained.

Wheelhouse got rolling in 2015, bringing the wheeled kitchen to food-truck events, farmers markets, festivals, and fairs over the first couple of years. It still takes part in some 75 events per year, but mixed in with music festivals, like the Green River Festival, and other public gatherings is an increasing number of private, catered events.

“For some of those, we don’t actually use the food truck,” he said. “Or, sometimes we bring the food truck to a wedding and do a family-style dinner, followed by late-night tacos from the truck. We do a lot of private events, and generally, we don’t do as many public events as we used to.”

That evolution has brought them to the next step, and they’re in the process of purchasing a property in Amherst to — much like Holyoke Hummus and Sun Kim Bop — open up a brick-and-mortar version of Wheelhouse.

“Will and I both think the Valley is such a unique place, in large part because of the agricultural heritage here, and the amazing small farms and growers — and large farms and growers. We can get grain here, dairy, fruit, vegetables, meat, mushrooms, fish — you name it, there’s a different place for it,” he said. “And it’s sort of our mission to highlight the amazing work these growers are doing. The farms contribute in a big way to the culture of our communities, and we want to shine a spotlight on them.”

It’s a shifting spotlight, to be sure, as the menus at Wheelhouse are constantly in flux, based on what’s coming out of the ground locally that month — from spring vegetables to summer fruits to root vegetables when the weather cools down.

“We change the menus basically every week based on what’s fresh, what’s going to be in season,” he said, noting that will be a feature at the brick-and-mortar restaurant, too. “That’s a big challenge, to accommodate what’s available in a given week.” 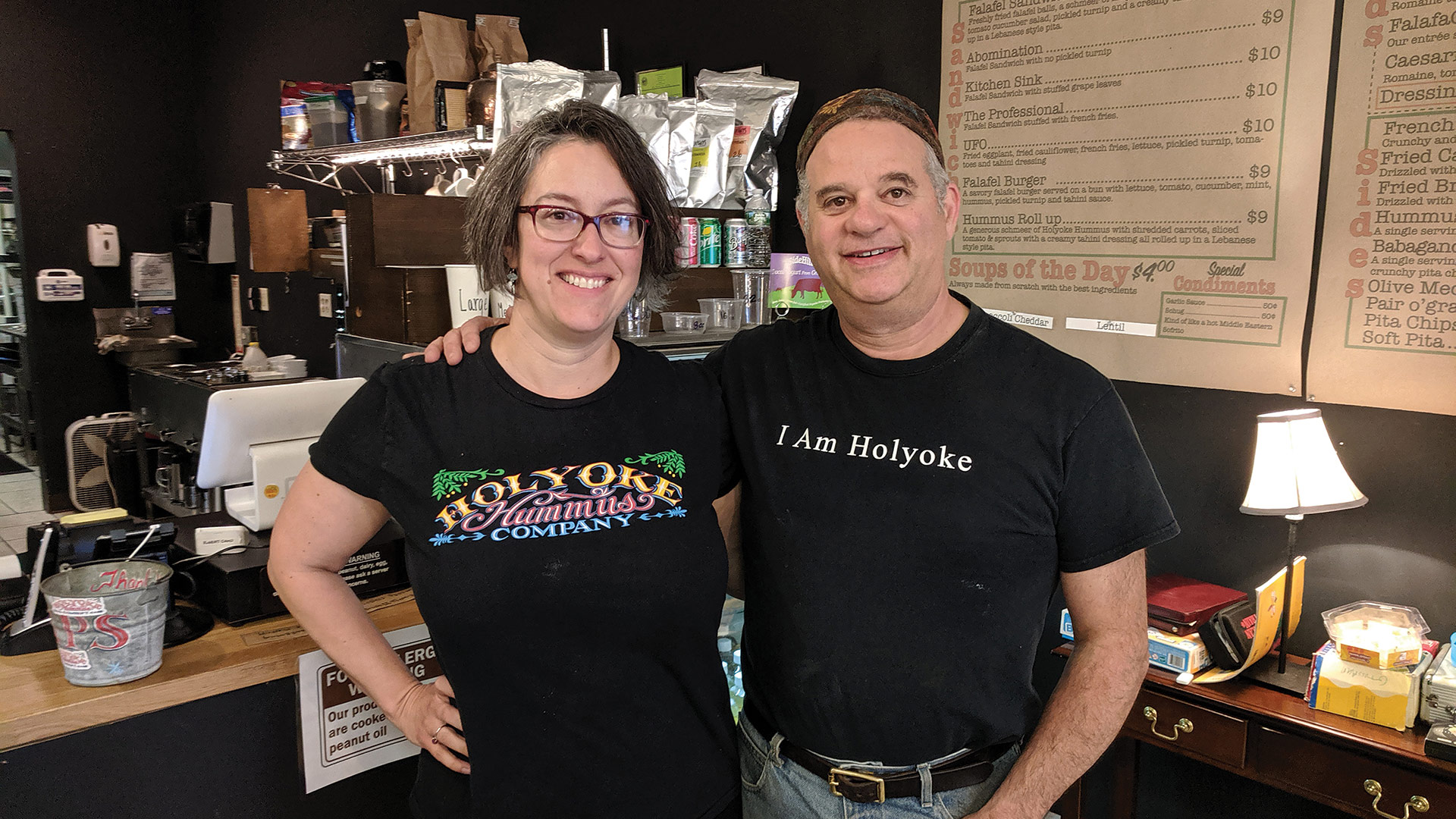 John Grossman and Dawn Cordeiro are among a handful of food-truck operators who have translated their success into a brick-and-mortar restaurant — or are planning to do so.

What helps is that the Pioneer Valley is home to a progressive, multi-cultural, and culinary adventurous population that’s open to new tastes, and that means opportunity for truck owners who can carve out a niche, as Grossman has with his creative takes on falafel and hummus.

“People in Holyoke are interested in a wide variety of foods,” he said.

As for the restaurant, “it has a fun vibe,” he added. “We always knew lunch and dinner would be the bread and butter. But we started breakfast at the beginning of the year, and we also went to seven days a week. We were able to grow the restaurant in ways we weren’t even thinking about.”

He wasn’t sure High Street was ready for a seven-day operation, he noted, because it’s a largely commercial district that clears out after business hours.

But we heard people telling us, ‘I live in Holyoke but work in Springfield, and I can’t get back from work in time to eat at your place. Weekends would be great.’ And weekends are going nicely; people are happy we have food available every day.”

Still, food trucks are still about getting into plenty of outdoor events and raising their profile — usually for one type of food, as Grossman has done, and as Kim has done with Korean street food.

She told BusinessWest she’s relieved to have the Main Street shop, as a food-truck-only business was problematic in some ways. Simply put, it’s not easy to prepare everything without a commercial kitchen, with limited space and always having to supply electricity, gas, and water to the vehicle.

“It was tough; we were working without a real kitchen, like a restaurant has. That’s why we started thinking, ‘if I opened up a restaurant, we could prep all those things in the restaurant’s kitchen.’”

In fact, the truck and restaurant have boosted each other, Kim noted. “Sometimes people who find us at the truck come to the restaurant, and the restaurant people come to the truck. They both have the same logo and colors, and they can make a connection. Rather than having only a restaurant or truck, that really gives us synergy.”

Cordeiro has been out front with marketing Holyoke Hummus — both the food truck and the restaurant — especially online. “We’re mobile, and people are mobile, too, and that’s how you reach them,” Grossman said. “She’s been a great voice for us, explaining who we are and reaching people who’ll want to follow us around and be a part of this.”

As for Mazar, “I like to joke that we started this business just so we get to eat more of Will’s food,” he said. “At the end of the day, we just love food. We’re not trying to be pretentious about it; we just want to make it accessible.”

When asked what he enjoys about the mobile food lifestyle, he was quick to respond.

“It’s the people — well, the combination of people and food. Food trucks are a great interaction between the natural world and the human world. That’s a great inspiration for Will and me. We work with amazing farms — it all starts with them — and we get to see people experience the natural world in an incredibly delicious and satisfying way.”