NAYP Readies Itself for Reinvention

Editor’s Note: This is the first in a series of stories spotlighting the work being done by area chambers of commerce and other economic-development-related agencies. We start with Northampton Area Young Professionals. 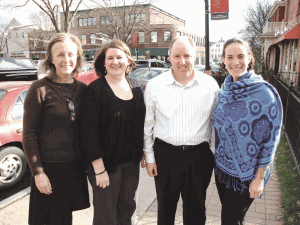 Sitting around the conference table at the Northampton Chamber of Commerce were some members of a new ‘executive team.’
That’s the name the Northampton Area Young Professionals — or NAYP, as the group calls itself colloquially — are using for the new leadership that has been steadily helping to reinvent the organization.
Some departures in the prior leadership of NAYP have led the group to take a look at its core values and mission. Kate Glynn is the owner of A Child’s Garden and co-owner of Impish, two children’s stores in downtown Northampton, and she said they were necessary changes for the group to evolve.
“Over the past four years of NAYP being up and running, we’ve learned that young professionals change careers,” she said. “We’re at a time in our lives where people get new opportunities, professionally speaking, or they’re making big changes in their private lives, having babies. And that’s the nature of being a young professional in today’s world.
“So, rather than have a static organization that isn’t flexible, nor addressing actual needs, we’ve decided to open it up and re-examine,” she added.
Rich Horton, Northampton director of Community Staffing, an employment agency, said NAYP is currently making “aggressive structural changes.”
“Historically it’s been what we called the leadership team — 10 or 12 people, a president, vice president, with committees underneath that,” he said. “So we decided to pull back and make the leadership roles a committee, with an executive team at its core. That team will have five members responsible for strategy, making sure everything gets done, with project leaders overseeing specific issues.
“The leadership of NAYP is no longer just 10 people,” he continued. “Rather, it’s really whoever wants to be involved. We’ll be having open meetings where anyone can come, and we expect that, over time, there will be a core of people who are consistently showing up. It really is more of an open format, allowing us to get more warm bodies in the room, getting things done that we want to get done, but also just to get excitement going around.”
The sixth de facto member of the executive team is Lynn Kennedy, the NAYP’s liaison within the Northampton Chamber of Commerce. She was quick to add that, while all this talk of restructured leadership and changing titles might sound like an entirely new organization, NAYP will not change in the way the group functions for its members.
“But there is one change that we want them to see,” she added, “and that is how to get involved, and at what levels. They don’t need to make these excessive commitments to get involved — they can be involved at the level that works for them.
“We hope that the NAYP membership is seeing a more clear way for them to be part of the group. That was a barrier that we are recognizing — that people weren’t always sure of the steps that they needed to take before.”
While the NAYP team was talking out the changes that are still taking place, they did state that they are, as always, ready to get down to business. Talking with BusinessWest for this inaugural feature, NAYP members said that, at its next meet-and greet-function to take place on Jan. 12, relative terms like ‘young’ and ‘area’ keep it pretty open as far is who is welcome to attend.
“We’re never going to say ‘no’ to someone because of where they are from,” Kennedy said, “or that you’re too old.”

Defining Moments
“The way that I address that question of who can be a member,” Glynn said, “and it comes up all the time, is that young can mean chronological; young can mean in business. Or young can mean that you have a fresh perspective on how you want to be part of the community.”
She was one of the early members of NAYP, which is not yet five years old. Initially, there was a common theme among other businesspeople like her, that a lack of a forum for young professionals needed to be addressed.
“I know there are other young people out there in business,” she remembered, “who consider their professional lives first and foremost, but also have a desire for networking and social opportunities within that.”
The Northampton Chamber of Commerce also realized early on the importance of such an organization, and NAYP considers them a sponsor and its biggest advocate. Suzanne Beck is the chamber’s executive director, and she told BusinessWest that there has always been a lot of talk in the Valley about who is that next generation in business and what is their commitment to the region. The chamber’s commitment to NAYP has stemmed from that question.
“Many of those people that were at the beginning of our downtown’s renaissance are aging out of their businesses,” she continued. “There was a five-year period where we really asked, ‘who’s next?’ Kate is one of the younger generation with a retail presence on Main Street, and these days, if you walk through Thorne’s, it’s amazing how many young people are running businesses there.”
NAYP started as a once-a-month networking event, and it has added things like leadership lunches, where a small group meets with area CEOs to learn about their career paths. There’s also a strong philanthropic component, working with area nonprofits, and Glynn said the monthly meetings are also “an opportunity for a local nonprofit to stand up and tell us what they do. We ask that they don’t make a pitch for money, but it’s more of an educational instruction as to what they do within the community, and if members want to get involved, here’s how.”
Borrowing an idea from the playbook of the Young Professional Society of Greater Springfield, NAYP launched what it calls a Nonprofit Board Fair this past summer. “What we find is that a lot of young professionals have interest in nonprofit leadership opportunities, but don’t have any clue as to how to get on a board,” said Horton.
“We worked closely with the local United Way,” he continued, “and we reached out to other nonprofits and stipulated that they had to have a board opportunity opening in the next six months. They didn’t have to actually take any of our folks, but they did have to have an opening.” The meeting was well-attended, and all members said that this was assuredly the first of an unfolding tradition for NAYP.

School of Thought
From the perspective of the chamber, Beck said NAYP fills a need for that developing generation of businesspeople in the region.
“With all the colleges and UMass, there’s always been the question of what happens to those kids who have been very well-educated and want to stay here,” she said. “We know that a huge percentage of people who are educated here want to stay here, and unfortunately we know that the majority of them won’t find it easy to find a job to keep them here. NAYP serves an important purpose for developing those connections to the community that might be more valuable to them.”
As one of those former students, Glynn said that it is exciting to see the possibilities for new members within NAYP’s frameworks, because a larger membership means more opportunities for individuals and for the organization as a whole. With a committee-based leadership, Kennedy noted that this structure will be an asset in how those opportunities are addressed.
“In the past, we had so many things that we wanted to do, but only a small number of people able to get things done,” she said, adding that the organization will look hard at prioritizing programs and then maximizing its available young talent to carry them out.
But as the assembled members of NAYP said, the core mission of the group will always be welcoming anyone who wants to be a member. There are currently 135 dues-paying NAYPs, and the goal is for that number to rise.
“Just last week, we had an event, and I met five or six people,” Horton said. “The hope is that they will become members, and from that become more involved. We have really evolved into a vibrant population. There’s a younger slant, but certainly there are folks who are much older in age but who contribute to the energy that knows no age limits.”
Said Glynn, “it’s not just a party with a purpose — we want it to be a fun networking event, but it’s an opportunity to be professional and social with a business perspective. People are coming because of that energy.”