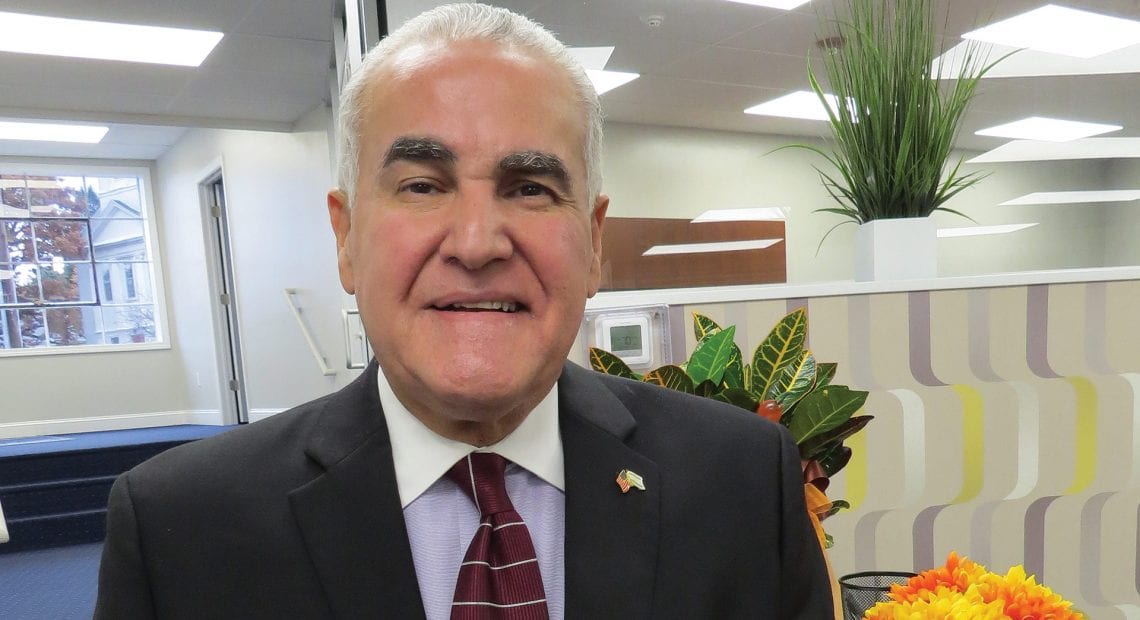 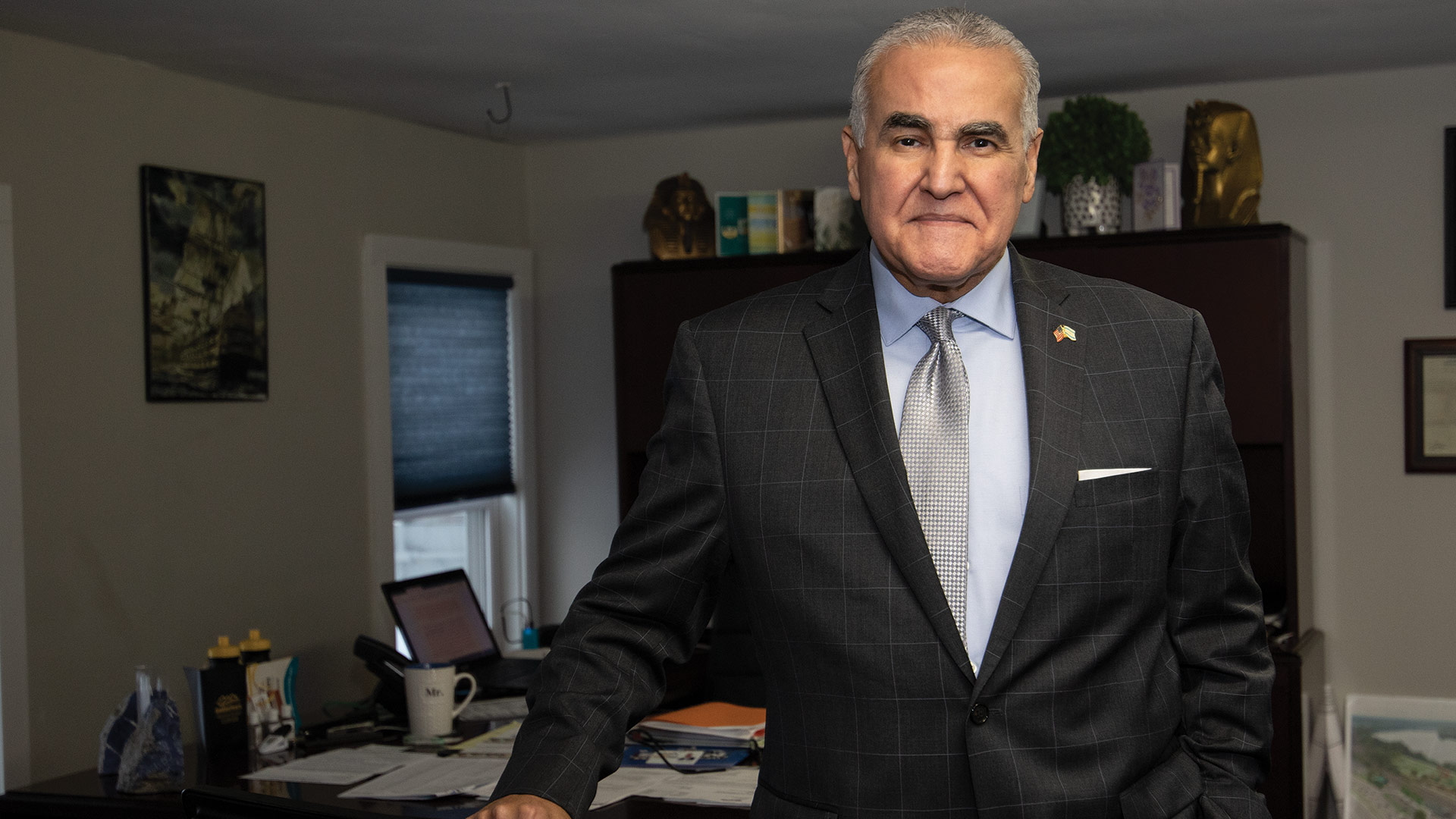 Cesar Ruiz Jr. knew he was stating the obvious, but he wanted to make a point.

“This business is certainly not for the faint of heart,” he told BusinessWest, referring to the home-care industry and the fact that, by his count, there are close to 300 licensed companies in that sector within a 15-mile radius of the center of East Longmeadow, where he now operates his own venture, Golden Years.

He decided to join that very crowded field, when others might be put off by those numbers, for a number of reasons, but two in particular — a unique and highly successful model of care that Ruiz refers to simply as ‘the magic,’ and some real inspiration from three people who were very important to him — his parents and his grandmother.

As for the model, or the magic, it is a deep mix of services and programs, and three that are somewhat unique — music therapy, a ‘laughter program,’ and aromatherapy (more on all those later). As for those inspirations from his family … they were the real catalysts for Ruiz, who spent most of his career in the banking industry, to switch career gears in a profound way.

“We don’t look at ourselves as competitors — that’s a word that we don’t use here. We’re creators — we create our niche. And we do that by telling our story and emphasizing our services.”

His grandmother needed home care in Florida more than 15 years ago, and Ruiz recalls not only how poor that care was (family members generally provided the care for her), but how he resolved to create something better.

“We were asking the question — why isn’t there quality care?” he recalled. “And through that process, we began thinking that there has to be a better way.”

But the timing and other circumstances just weren’t right to launch a business.

It was after he relocated to this area — and the death of his father in late 2016 — that Ruiz found the needed inspiration to push on with providing that ‘better way’ on a commercial level and thus break into the ultra-competitive home-care industry.

As for his mother, well, she is the barometer for the hiring of all caregivers.

“My mom is the gold standard,” he explained. “Every person on our team needs to have the heart for caring that my mom has always demonstrated.”

And to say he has already made a mark in this sector would be a huge understatement.

Indeed, after starting slow — he can remember the phone in his office simply not ringing for several months while he was slowly building up relationships — he has been adding clients, and employees, at a torrid pace.

Indeed, by mid-October, when he sat down with BusinessWest, Ruiz said the company had roughly 350 clients and 374 caregivers, with both numbers expected to climb steadily in the months and years to come. That’s because Ruiz and partners Lisa and Vincent Santaniello are moving forward with plans to expand Golden Years into the Worcester and Boston markets as well as Connecticut. And after that, the plan would be expand nationally.

“We’re happy with our growth in this market, but we’re expanding to the east and to the south,” Ruiz explained, adding quickly that these are crowded markets as well when it comes to entrepreneurs looking to capitalize on an aging population, but a population that also wants to retain its independence — and thus remain in the home — as long as possible. 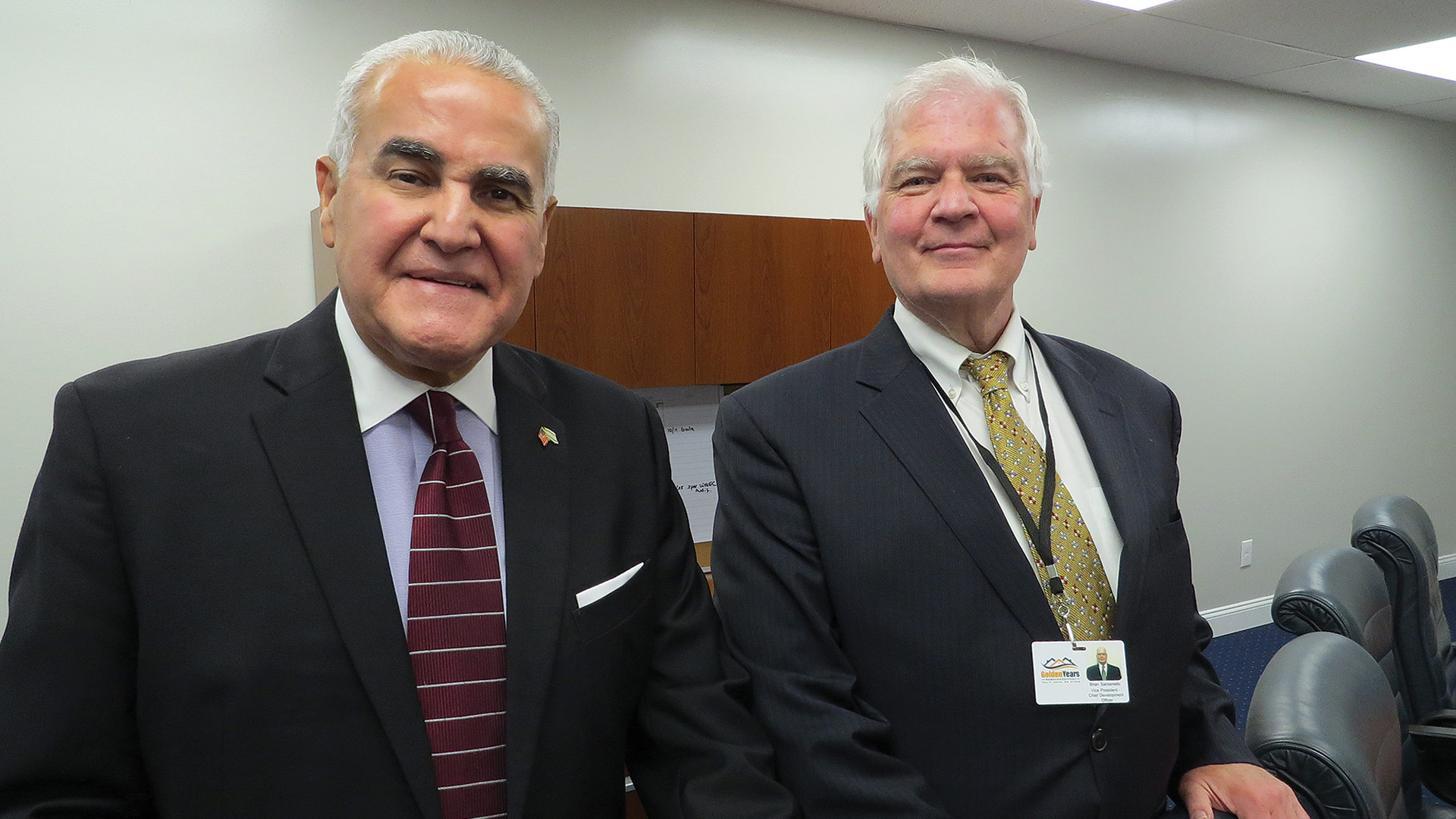 Cesar Ruiz, seen here with Brian Santaniello, director of Development for Golden Years, says the company is expanding its footprint to the east and the south, and will soon be looking to move into other states as well.

“The Boston area is quite saturated,” he acknowledged. “But we don’t look at ourselves as competitors — that’s a word that we don’t use here. We’re creators — we create our niche. And we do that by telling our story and emphasizing our services.”

While expanding geographically, the company is also broadening its base of services and diversifying. It recently launched Golden Years Staffing, which, as that name suggests, specializes in providing health professionals, and especially nurses, to area healthcare providers, and will soon launch Golden Years Adult Daycare.

At the moment, the company is changing the face of the center of East Longmeadow — the company has moved into the oldest commercial space in the town (once a general store of sorts) and adjacent property and has given it a dramatic facelift — while certainly shaking up the home-care industry at the same time.

For this issue, BusinessWest talked at length with Ruiz about Golden Years and where he wants to take this intriguing venture in the years to come.

Turning the clock back to late 2016, when his father died and when he subsequently resolved to push ahead with a home-care venture, Ruiz said his research ultimately determined, as noted earlier, that this region was crowded with competition.

But when he drilled deeper into the numbers, he discovered that a large number of the players were small in size, “mom-and-pop” operations, as he called them, that were caring for perhaps a handful of clients, and some franchises “happy to have their 50 or 60 clients.” There were several larger operations, but he saw an opportunity to provide something different.

“We wanted to develop something very unique, something very large, that would have our signature stamp on it,” he explained, referring again to ‘the magic’ and its unique offerings.

“That’s what sets us apart — that’s what my mother came up with when she was caring for my grandmother,” he explained, adding that a similar approach was taken in the care of his father.

Elaborating, he offered more details on what would be the most unique of the three programs — laughter.

“That’s the most challenging for us, because we have to take people out of their comfort zones,” he explained. “The mind doesn’t make a distinction between a real laugh and a fake laugh — it still goes through that chemical change in your mind.”

The program — he doesn’t use the word ‘therapy’ in this case — involves exercises that do get people out of their comfort zones and get them laughing for real, an important ingredient in overall quality of life, he went on.

But there are several ingredients in this success formula, said Ruiz, adding that others include strong relationship-building efforts with area healthcare providers and senior-services organizations — strong sources for referrals — and a high level of quality that inspires him to eschew that word ‘competitor’ and instead use ‘creator.’ 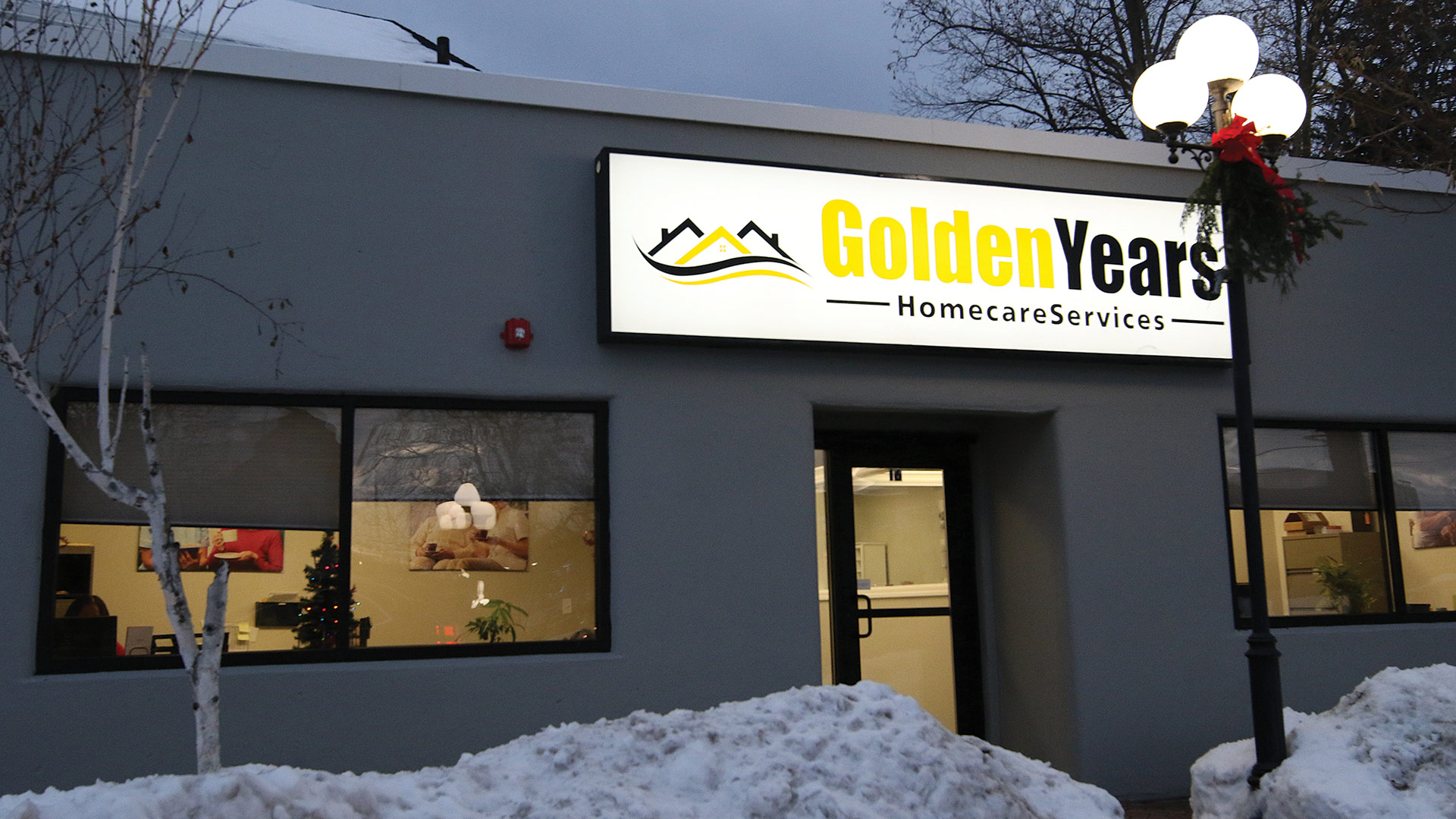 Golden Years has transformed the historic and formerly underutilized property in the center of East Longmeadow.

“We have a lot of hands in terms of the overall operations,” he explained. “We don’t just place a client with a caregiver and visit them once every quarter or once every six months; we visit them every month.

“We have supervisors that oversee that care,” he went on. “They’re responsible for the caregivers, they’re responsible for the client, and every month we have one of our staff people visiting the client to make sure they’re getting the delivery of their healthcare plan. That takes personnel, it takes time, and it takes extra expense, but we’re happy to do that because it ensures quality of service and care.”

This mindset also extends to the training of the caregivers, said Ruiz, adding that they are eventually evaluated on their ability to incorporate those three basic tenets — laughter, music, and aromatherapy — into the client’s care.

“We really want them to be engaged with our clients,” he told BusinessWest. “We encourage it, we demand it … we just don’t want to be transactional; we really want these caregivers to make a difference in overall quality of care.”

As for that relationship-building ability, Ruiz said he and his team started honing it in early 2017, just as the doors to the business opened, when the company visited as many senior centers, rehabilitation facilities, and other related facilities as possible to get its message across.

The visit that really got the ball rolling was one to Greater Springfield Senior Services, he recalled, adding that Golden Years was one of two companies invited to make a presentation to GSSS staff, including nurses, case managers, directors, and supervisors.

“We had a captive audience of about 85 people,” he recalled, adding this session took place in September 2017. “Up to that point, we had zero clients; we had just been planting seeds, planting seeds, and planting more seeds.

“After that presentation … three days later, the phone began to ring,” he went on. “And it hasn’t stopped since.”

Evidence for this can be found in the center in East Longmeadow, where the company has transformed a once-tired retail center that has seen a number of uses over the years, most recently as home to the Ski Haus. That signage is coming down, to be replaced with ‘Golden Years,’ two words that may be seen in many more places in the months and years to come.

“We plan to be multiple states — Connecticut is just the beginning of that,” he said, adding that franchising the company’s model is a distinct possibility. “We have a lot of growing still to do; we’ve only scratched the surface.”

For now, the focus is on continuing with those relationship-building efforts, getting the message out, and building upon the very solid foundation that has been created over the past three years.

As noted at the very top, Ruiz knew the homecare field was already crowded when he decided to enter it. He wasn’t fazed by that reality and certainly not faint of heart.

That’s because he knew he had a good model and an even better mindset — one where he looked at every client and potential client as his own parents when it came to the level of care he wanted to provide.

That’s why he doesn’t see his surging company as a competitor — but, rather, as a creator. 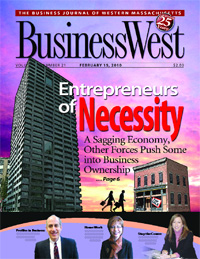