Johnson & Hill Builds on Its Reputation for Effective Match Making 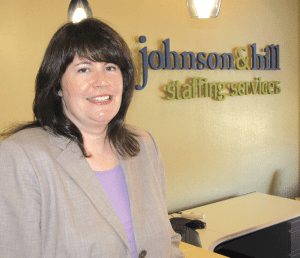 Andrea Hill-Cataldo knows how difficult it can be to match a job seeker with the right company. And a lingering recession — not to mention a more complicated hiring landscape — haven’t made things any easier.
“It’s so frustrating for candidates, sending résumés into this abyss, not hearing back. And for employers who are inundated with a hundred résumés, it’s hard to get back to every candidate,” said Hill-Cataldo, president of Johnson & Hill Staffing Services.”
“At one time, you walked your résumé into a company or did a nice cover letter with a nice presentation,” and that was sufficient, she noted. But now, with many companies relying on online applications, “you’re e-mailing your résumé, clicking here, clicking there. As a result, candidates apply for more positions, employers get more candidates, and it’s harder for everyone.”
That’s where a good staffing service comes in. “For us, we still have that personal touch. We’re meeting with candidates and advocating for them,” she told BusinessWest. “We also do a lot of career coaching; we advise them on their résumé, questions they should be prepared to answer, talk about the environments they want to work in, industries they’re interested in.”
Hill-Cataldo likes to talk about building relationships, not just with those seeking work, but with the employers Johnson & Hill has developed long-lasting connections with during the 18 years the agency has been in business.
“We have a team of people, some of whom have been here since the beginning,” she said. “It makes a big difference when our clients call, because we know their history, their culture. That’s a big value add. People like to do business with people they like and know and trust.”
Johnson & Hill has come a long way since Hill-Cataldo and her cousin, Michaela Johnson, launched it from the ashes of a former Kelly Services agency after that corporation decided to take back its privately managed franchises during the mid-’90s.
Johnson’s mother (and Hill-Cataldo’s aunt) had run that office for decades, building a solid reputation and a number of connections, and when she retired after her franchise closed, the younger pair felt they could continue the legacy, with Johnson providing the initial financial backing and Hill-Cataldo contributing “sweat equity,” she said.
“There were some key players who had been with the company for a long time, so we hired two key people and built a company around them,” she explained. “There was a great history there, established relationships of trust. We grew that and built on that.”

Changing Tides
Since those early days, Hill-Cataldo told BusinessWest, the agency has both evolved and expanded.
Geographically, Johnson & Hill has offices in Springfield, Northampton, and Pittsfield, but serves clients as far north as Greenfield, south into Connecticut, and east to the Worcester area.
Meanwhile, the company has shifted from a full-service job-placement service to one that focuses on administrative, accounting, and legal careers. “It makes a real difference when you focus and specialize,” she said. “We found business doubled once we decided to focus on niche businesses.”
The strategy helps Johnson & Hill to better understand the industries and employers they serve. “We really try to be big picture, looking at a long-term approach with clients, building rapport and trust, and putting a lot of time into getting to know their culture,” she explained.
“We stand behind what we do for them, and in turn, they come to trust us,” she continued. “We’ve had some unique opportunities beyond typical staffing services; they also trust us with training and workforce development. We have some very unique, long-standing relationships with clients we’re very appreciative of.”
Hill-Cataldo and her staff of 10 have witnessed a number of shifts in the way companies attract talent. One is an increasing reliance on the temp-to-hire concept, as opposed to direct hiring.
“Temp-to-hire is a great way to bring someone on and not commit, but it’s great for the candidate, too; it’s not a one-sided story,” she said, adding that, if it’s not a great fit, Johnson & Hill already knows the candidate and can hit the ground running to find him or her something else. And if the job works out, “both sides are informed and feel better about the match. It’s better to be on the same page when you hire someone.”
The role of an employment agency looms more important than before, too, especially for those — companies and job seekers alike — who are anxious about navigating an increasingly complicated employment landscape.
“Hiring has changed dramatically over the past five years,” Hill-Cataldo said. “I feel bad for smaller companies that used to just place an ad in the paper. Now, what do you do? What online source to you use? How do you find the best people, manage your social-media presence, and market for better candidates?
“You have to cast a wide net, and then you have to manage that,” she went on. “It’s not just combing through résumés and getting back to people. We find recruiting more difficult, and the Internet has made it even more difficult.”
For job seekers in particular, “it’s lonely for them sometimes,” she continued, adding that it doesn’t have to be. “Many employers hire differently now; they bring in temp-to-hire employees to see if it’s a good fit. And many work with services like ours; we make sure you’re being considered for as many positions as we can. We don’t charge a fee for candidates, and we advocate for you. It can be a real positive.”
Many employers are happy to partner with agencies to ease the burden of candidate searches while still casting a wide net. “Our clients are overwhelmed. They’re all doing more with less,” she said. “They’re trying to add next staff members or replace a staff member, but they’re overwhelmed by other responsibilities. With our help, they have the resources to really look at qualified candidates, rather than hundreds of résumés.”

Satisfying Work
With so many changes occurring in the employment field, the company participates in a number of local and national organizations to keep current, said Hill-Cataldo. “But, thankfully, meeting with clients, talking to clients all the time, that in itself is an education. We can draw conclusions from what we see out on the front lines.”
Many of the agency’s clients were affected by the Great Recession and its aftereffects, she noted, but the picture is improving. “We in this industry are used to ups and downs, and we’re coming out of another dip,” she said. “We’ve definitely seen an uptick recently … a slow climb out.”
But it’s not only job seekers who lost their employment during the recession that find Johnson & Hill’s services useful. “We also help people who have taken a break from employment to gain some experience and get back in,” she said, citing, as examples, those who choose to stay at home to care for an infant or a sick parent. “That happens, and that’s explainable, but now they need more skills, and it’s nice to help them build a bridge to get back.”
Whatever the case, “it’s really satisfying when people we’ve worked with find great situations,” she told BusinessWest. “And we feel really good about the companies we work with. We work with a lot of colleges and major employers. We consciously seek out certain employers, and we feel good when people take a job with them. We know they’ll have a good experience.”