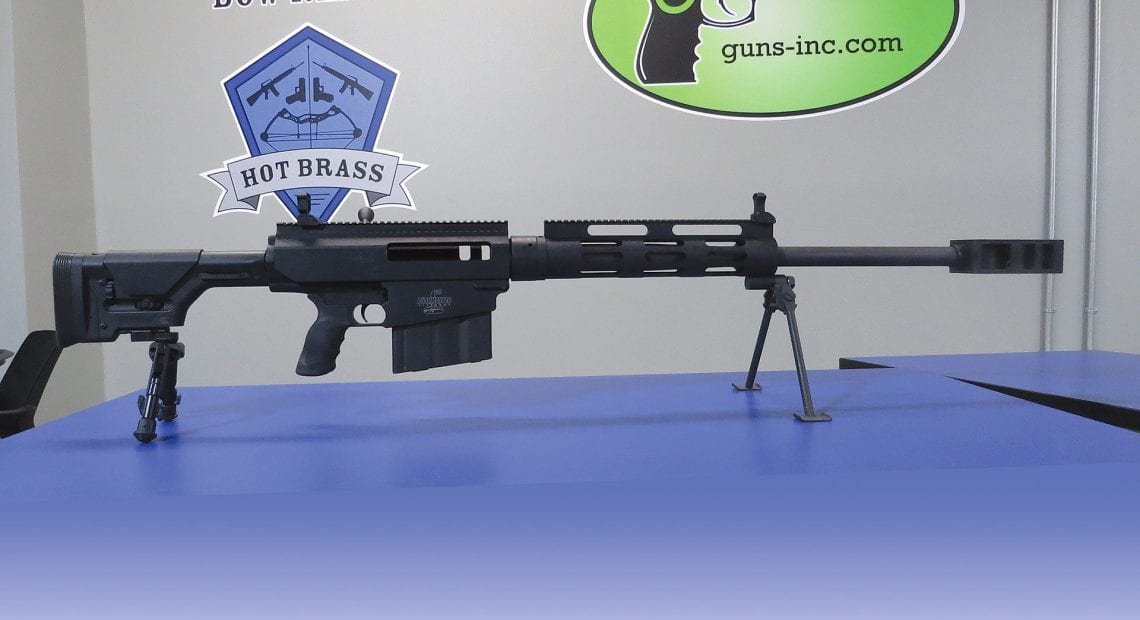 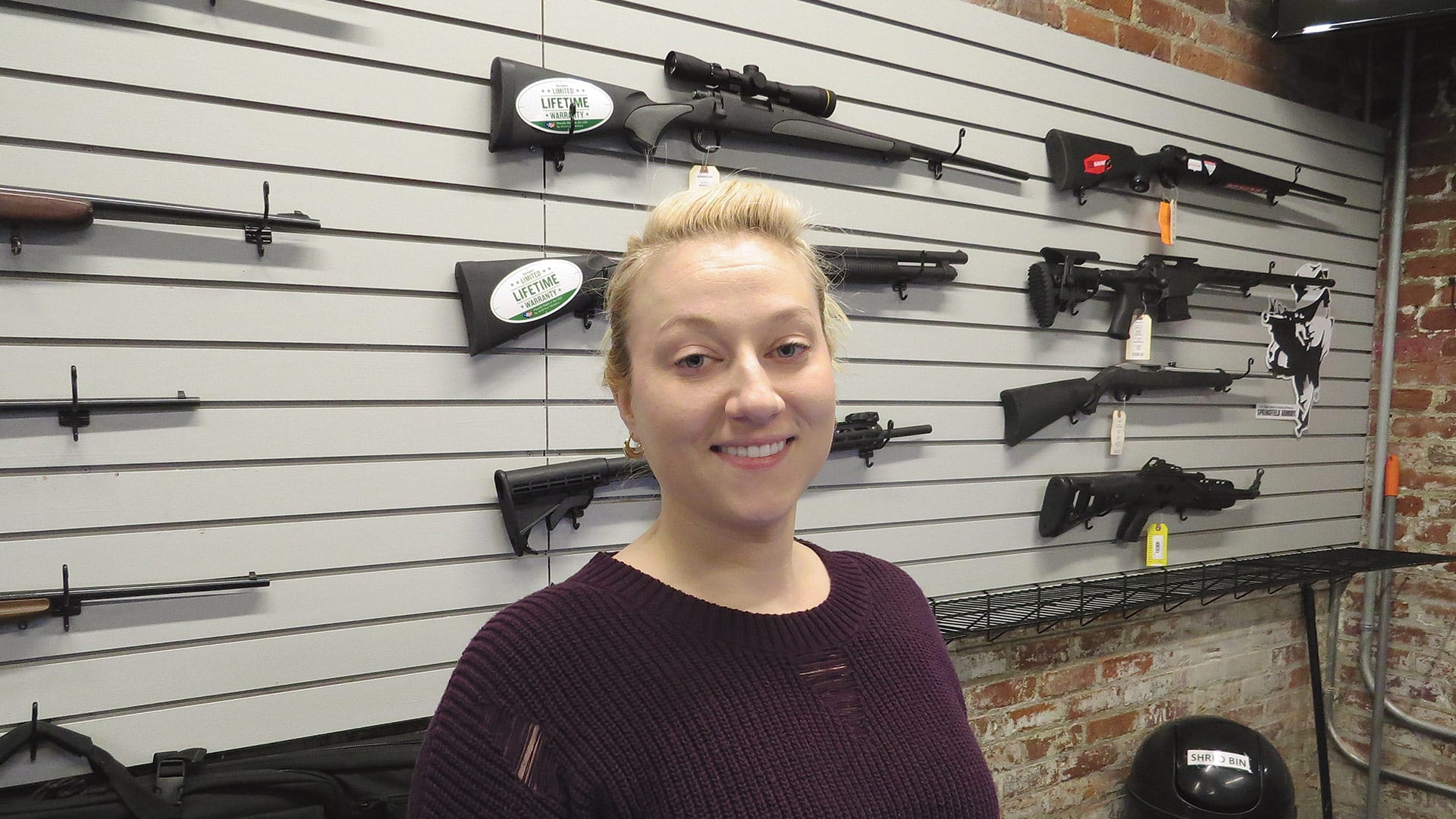 New Businesses like to start off with a bang. Hot Brass in West Springfield has done that laterally — thousands of bangs actually. It’s the only indoor shooting range within a few hours’ drive. And it’s one of two businesses — a gun retail shop called Guns Inc. being the other — operating out of a former auto body shop on Main Street. Thus farm the ventures are on target when it comes to established goals and patterns of growth.

It doesn’t have a nickname. Yet.

They just call it the ‘50-cal.’ That’s short — although not much shorter — for .50 caliber, as in the .50 caliber sniper rifle made by Connecticut-based Bushmaster Firearms.

The BA 50, as it’s called, weighs 30 pounds and is nearly five feet long. It fires — quite loudly — a huge projectile that makes a very large hole in the paper target, and is touted by its maker for its extreme accuracy.

It is now one of the star attractions at the Hot Brass indoor firearm and bow range in West Springfield, a public facility, which opened its doors late last summer.

“It’s very popular — people love firing it,” said Kendall Knapik, manager of this family business, noting that visitors can rent it for $35, plus $10 for every round (the ammunition is expensive) — or fire it just once or twice — and people of all ages and persuasions have done just that. “We have a lot of people come in, rent the 50-cal, and get pictures and video with it, because it’s not often you see one of those.”

The BA 50 is just one element of what has become a large, multi-faceted operation. There are actually two businesses located at once was an auto-body shop on Main Street — Hot Brass, a new venture, and a retail firearms component known as Guns Inc., launched by Knapik’s parents, David and Cheryl Knapik, and formerly operated out of a small storefront farther down Main Street.

“We have a lot of people come in, rent the 50-cal, and get pictures and video with it, because it’s not often you see one of those.”

Within those two ventures, there are many smaller divisions, or revenue streams, if you will, from the indoor firearm and bow ranges to ‘license to carry’ gun-safety courses held every other Sunday; from a growing number of events — there have been several bachelor parties, for example — to the gun sales themselves, which have been steady if not spectacular since Donald Trump was elected president and a huge threat to gun accessibility removed (more on that later).

Together, these many components are meeting or exceeding lofty goals set when the ceremonial ribbon was cut, said Knapik, adding that, overall, the ambitious venture was launched out of perceived need for these various services, and the need has been verified.

“There are several private clubs in this region, but no public ranges,” she explained, adding that this is the only facility that fits this description within a roughly 100-mile radius.

Thus, there are often a variety of license plates seen in the large parking lot, not to mention a very diverse client base, said Knapik, adding that while sport shooting has always been fairly popular, it is becoming much more so, involving men, as it has historically, but now also women, couples, even businesses looking for a new and different way to do some team-building work. 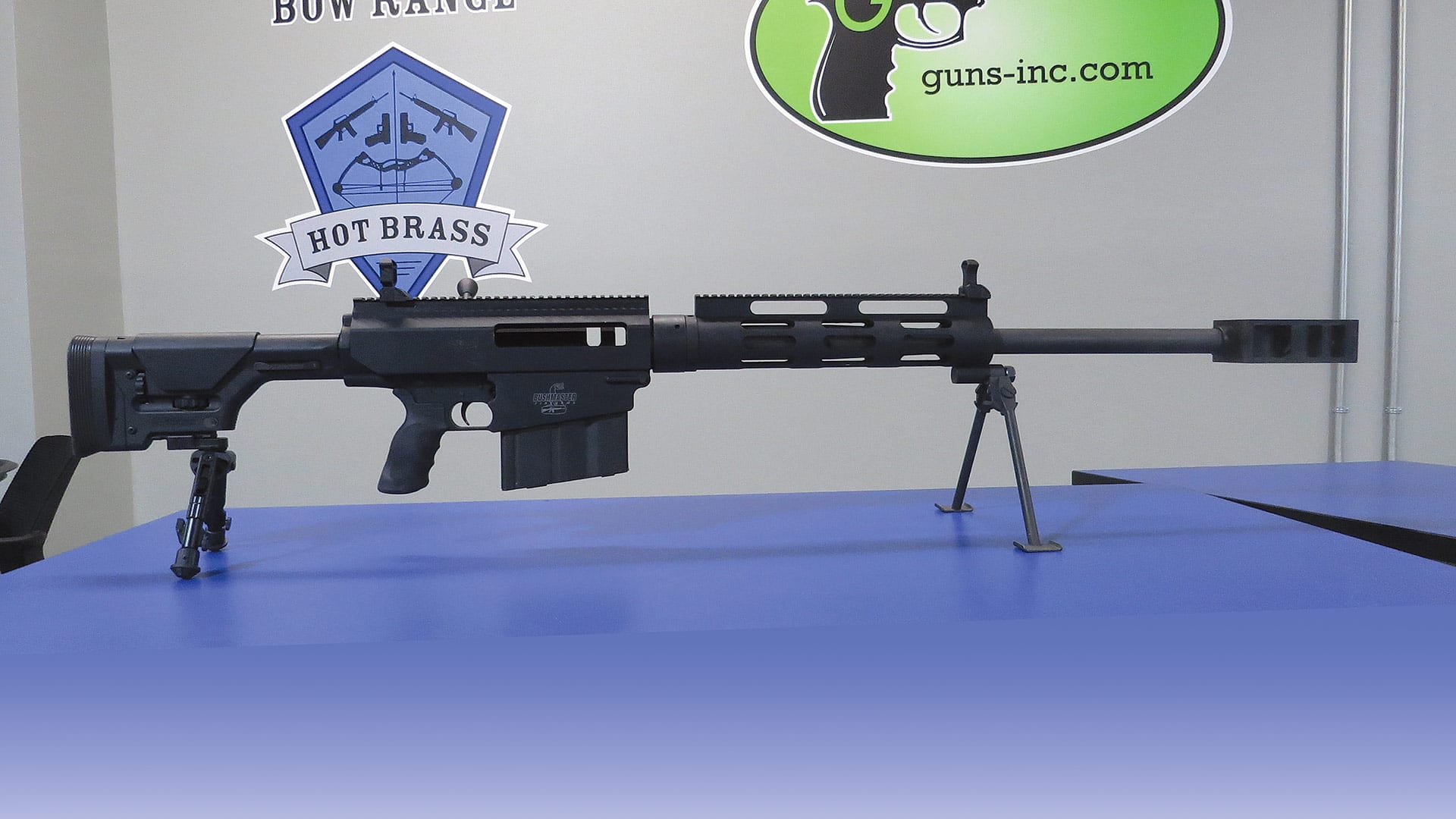 The .50 caliber sniper rifle is a popular attraction at Hot Brass, drawing shooters of all ages.

“We’re seeing all kinds of people coming in to use the ranges — people of all ages,” she said, adding that the facility has hosted everyone from law-enforcement officials and military veterans to grandmothers starting a new hobby.

For this issue and its focus on sports and leisure, BusinessWest talked at length with Knapik about this family operation and why it is on target — both literally and figuratively — when it comes to ambitious projections for visitation and overall growth.

Knapik said the vision for Hot Brass and Guns Inc. started to come into focus more than two years ago, and the picture — and the promise — were enough to lure her back to the family business after several years spent living in Manhattan and working in the healthcare field.

That vision was for two symbiotic businesses operating under the same roof that would meet recognized needs within the region, she said.

The symbiotic part is fairly self-explanatory: Those who purchase guns need a place to shoot; meanwhile, those looking to purchase a gun will often try before they buy, and if they try at this range, they only need to walk a few dozen feet to likely find the model they’re looking for.

Indeed, Guns Inc. stocks both new and pre-owned firearms from such brands as Colt, Smith & Wesson, Sig Sauer, Ruger, Glock, Remington, Winchester, and Springfield Armory — as in the Springfield, Ill.-based company founded in 1974 to resurrect the most historically significant designs produced at the Armory in Springfield, Mass., such as the M1-Garand, the 1911 A1, and the M14, according to the company’s website.

As for the need part, Knapik noted, again, that there were and are several private ranges operated by sportsmen’s clubs in this area. These are outdoor facilities for the most part and require a membership.

Springfield-based Smith & Wesson operated a public shooting range at its facility on Roosevelt Avenue, but it closed several years ago, said Knapik, adding that, in many respects, Hot Brass fills that void and several others within the marketplace.

Getting the doors open was a massive undertaking — a $4 million investment overall — that involved obtaining not only a special permit from the city, but a mix of renovation and new construction at the former West Side Auto Body.

Through the first business quarter of operation, each of the various components of the business have seen a solid response from the buying public, said Knapik, who started with the archery lanes.

While not a hugely popular sport, archery is gaining some traction, she told BusinessWest, adding that Hot Brass offers a place to practice indoors; many practitioners are limited to their backyards, which makes it difficult to practice several months out of the year. 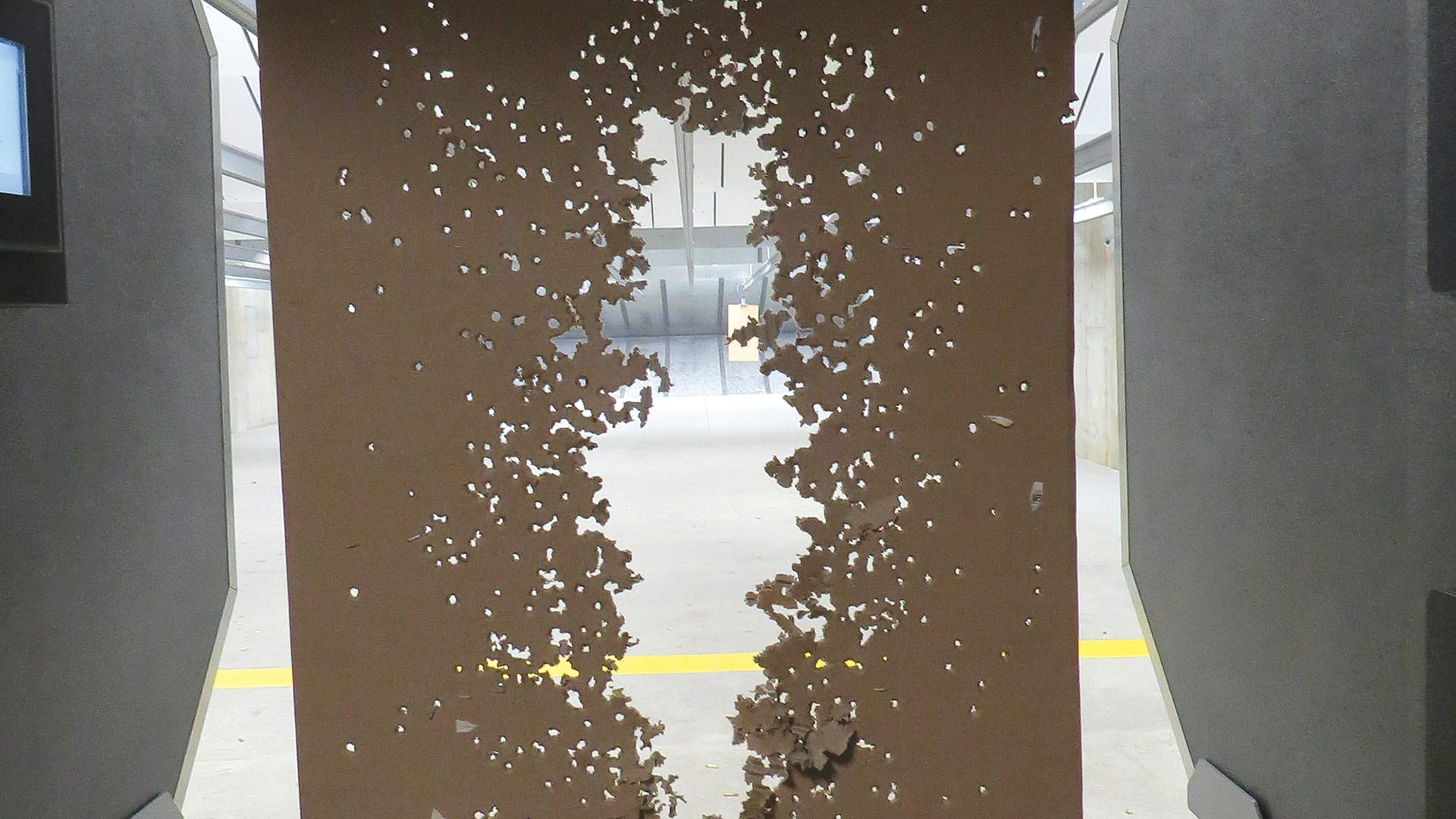 Four months after opening, the new location for Hot Brass and Guns Inc. is on target when it comes to the many goals set for the twin businesses.

Sport shooting is popular because it’s a form of release, Knapik told BusinessWest, especially at a time when many are burdened by large amounts of stress and need a way to attack it.

“You definitely feel much better after you shoot a little bit — that’s the consensus, anyway,” she said. “People always leave smiling, and they tell us how much better they feel, which is good to hear.”

Many are also leaving with guns, accessories, and clothing from Guns Inc., and, very often, photos of video of themselves, sometimes with the BA 50 and often in front of a ‘Hot Brass’ step-and-repeat erected near the front lobby.

Memberships are available for frequent shooters — and that’s a large constituency — or the range can be rented for $26.50 per hour.

Knapik said there are ongoing discussions about staging competitions at the facility, and that might well happen, but for now, the focus is on keeping the ranges open for visitors, and thus keeping them content.

“You definitely feel much better after you shoot a little bit — that’s the consensus, anyway. People always leave smiling, and they tell us how much better they feel, which is good to hear.”

It’s also on bringing more people and new and different audiences to the facility, she noted. While word-of-mouth referrals have been a large part of the marketing strategy, the company has done some radio and other traditional forms of advertising to get the word out.

As for gun sales at Guns Inc., Knapik said the “hysteria” from the months leading up to the 2016 election has certainly died down. Any by hysteria, she meant anxiety over whether — and for how long — people could buy certain weapons.

With Donald Trump in the White House, such anxiety has dissipated, if not evaporated entirely, slowing gun sales to a considerable degree.

Still, people are buying, as evidenced by the large number of gun shows staged in this region, many of them at the Big E, which is just a mile or so down the street, another factor driving traffic to Hot Brass.

Meanwhile, it’s holiday season, and that brings a number of visitors to the showroom, said Knapik.

“For many people, a gun is a great gift,” she said, adding quickly that, unless one is certain which model and caliber to put under the tree, a gift certificate is in order.

With a sticker price of nearly $5,000, it’s safe to say not many people will be finding a gift-wrapped BA 50 waiting for them on Christmas morning.

That’s OK … they can still fire one at Hot Brass, and probably leave, as Knapik said, feeling much better, with a smile on their face, and probably a commemorative photo.

The large gun has become one of many factors contributing to a solid start and promising outlook for this multi-faceted operation.

The Knapik family certainly took their best shot when they doubled down on their business a few years ago, and now, a wide range of visitors can do the same thing.