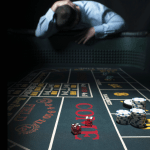 The casino age may be underway in Massachusetts, causing some to worry that large, flashy gaming resorts will introduce the scourge of gambling addiction in the Bay State.
Too late, says Dr. Baxter Chandler. Compulsive gambling is already a widespread problem.
“Massachusetts has one of the most successful lotteries in the world, and we have keno, and two large casinos within easy driving distance,” said Chandler, director of Behavioral Health Services at Holyoke Medical Center (HMC). “So problem gambling is not a new problem, but it is more recognized now as an issue.
“It’s a really tricky thing,” he continued. “A lot of people out there do scratch tickets or keno, and they don’t have the finances to do that. It’s easy to say, ‘Uncle John? All he does is scratch tickets.’ But if Uncle John is spending $400 a week on scratch tickets and only gets $600 in Social Security, then it’s a problem.”
But with the prospect of a casino resort in Springfield’s South End — the state’s Gaming Commission will choose one Western Mass. site for a casino early in 2014, and the $800 million MGM Springfield proposal is the only one on the table after voters in West Springfield and Palmer rejected casino bids — the issue of gambling addiction is certainly taking on a higher profile.
It’s timely, then, that the entire outpatient behavioral-health staffs of HMC and one of its affiliates, River Valley Counseling Center, recently earned the MA-PGS (Massachusetts Problem Gambling Specialist) certificate administered by the Mass. Council on Compulsive Gambling (MCCG). 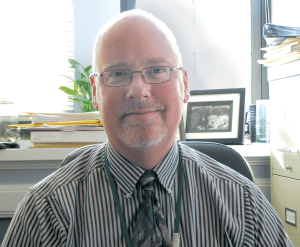 Dr. Baxter Chandler says health professionals typically don’t consider gambling a vice in itself, but are concerned about its effect on people’s lives when it spins out of control.

“Sometimes we get calls from health professionals asking us what we can do,” said Sasha Russell, program specialist in communications for the MCCG. “We can offer training to get them certified.”
The agency has also ramped up its efforts to get more behavioral-health professionals into the certificate program through a ‘training institute’ being set up in cities around the Bay State; Springfield will host one of those eight-week programs in April. “That will be done to get more people in Western Mass. on track toward getting the Massachusetts Problem Gambling special certificate.”
At the heart of the council’s efforts is the reality that, although there are some similarities between compulsive gambling and other addictions, such as alcoholism and substance abuse, problem gamblers have their own set of problems.
“Walking into this, a lot of us thought we could apply everything we know about addictions to problem gambling — how different can it be?” Chandler said. “And there are a lot of similarities, that’s true, but there are things that can set it apart.”
That’s why Holyoke Medical Center and River Valley Counseling have been working to expand and enhance their addiction-treatment services to cater specifically to this clientele.
“If someone comes in who’s never had a problem with alcohol or drugs,” Chandler said, “and you put them into a group where they’re the only gambler and everyone else is using substances, it can work, but a lot of times they don’t feel connected — they think, ‘I don’t do cocaine; I do keno.’ A lot of times, relatability is an issue. One thing we’re working hard to do is meeting people where they’re at.”

Risk and Reward
Still, Chandler and Russell were quick to clarify that gambling addiction is no mere loss of control, but has physiological similarities to substance abuse.
“Many times, people, depending on their background, feel like it’s a control thing; they think they just don’t know how to control themselves,” Russell said. “But people don’t realize the effect that gambling has. They don’t realize that, when you gamble, it releases the same dopamine in the brain as if you did drugs — as if you did cocaine.”
Although a gambler isn’t actually putting a chemical into his body, Chandler added, “according to the brain studies they’ve done on compulsive gamblers, similar areas of the brain light up, as if someone is using a substance.”
Science author and blogger Steven Kotler breaks down some of this research in an article titled “High as Hell: the Evolution of Our Gambling Addiction.”
“Scientists long believed that dopamine was pure pleasure,” he notes. “It was thought of as the reward portion of the body’s need/reward system. You wanted something fundamental to survival — like a next meal or a sexual partner — and when you got that thing, the brain released a little dopamine, so the next time you were faced with a similar situation (like being hungry), you would remember that feeding yourself felt damn good.”
But Kotler cites the work of several scientists, including Greg Berns, associate professor of Psychiatry and Behavioral Sciences at Emory University, suggesting that dopamine is actually released not when one receives the desired reward, but when one takes the risk to do the thing that leads to the reward.
In other words, a gambler doesn’t have to win at slots to get the dopamine ‘hit’; simply pulling the lever will do that. “And associating risk with reward is a gambler’s bread and butter,” Kotler writes.
The initial consequences of compulsive gambling are different than substance abuse, in that they’re largely financial, Chandler said. But physical and psychological effects tend to follow — as well as a proclivity toward other addictions.
“Problem gamblers are prone to having suicidal thoughts; their suicide rates are higher,” he explained. “If they feel trapped, that can trigger a higher rate of substance abuse. We fully expect to be treating a lot of people with dual diagnoses here, people with depression, anxiety, co-morbid anxiety disorders, all associated with problem gambling.
“For some people, once they get their problem gambling under control, maybe the other symptoms go away. For others, there may be biological depression. Either way, we focus on treating it all at once, not compartmentalizing it.”
According to the MCCG, between 2% and 3% of the population has experienced ‘disordered gambling’ in their lifetimes, a loose umbrella term for gambling behaviors that disrupt an individual’s family, social, or vocational life in some way. By that estimation, up to 185,000 Massachusetts residents have likely engaged in disordered gambling at some point.
“When they come in for treatment, you’re asking them to abstain from gambling. For most people, it’s not about cutting back, but ceasing gambling, similar to someone coming in for alcohol,” Chandler said. “We support groups like Gamblers Anonymous and encourage a lot of people to check that out.”
HMC offers a three-week partial-hospitalization program for more serious cases, typically those involving dual diagnoses, such as severe depression or other addictions. Chandler said the hospital works closely with River Valley to match each patient with the appropriate type of care, from group counseling to individualized work.
“For many years, gambling has been sort of lumped in with all addiction,” Chandler said. “When someone comes in for treatment, we’ve always asked, ‘do you have an issue with gambling?’ Now we’re paying even more attention, making sure we’re asking the right questions.”

Upping the Ante
Gambling addiction accounts for some $7 billion a year in added healthcare and criminal-justice costs, according to the National Council on Problem Gambling, and a significant portion of that has nothing to do with casinos. But the issue certainly has taken on a higher profile in Massachusetts over the past two years.
“Casino gambling has been legalized, so now it’s much more in the forefront in Western Mass.,” Chandler said of his dealings with the MCCG. “For many years, we had contact with them. But now that Western Mass. is looking to get a casino, everyone is sort of scrambling to respond to that.”
Russell described the council as largely a referral service. “When people call our helpline, we try to connect them to an outpatient service in their area or a Gamblers Anonymous meeting. We have packets of information we send to support them and get them on a path to recovery.”
The MCCG also hosts an annual weekend retreat for people in recovery, offering various workshops on how to stay on track. And, of course, it has ramped up efforts to bring behavioral-health professionals into its certificate program.
“One thing I’m really proud of is, prior to us doing this training, there were probably three or four people with this certificate in Western Mass.,” Chandler said. “We were able to train nearly 25 people.”
He was quick to note that gambling in itself is not necessarily a vice. “One thing I respect about the Mass. Council on Compulsive Gambling is that they’re neutral on the issue of gambling itself. And as treatment providers, we’re not pro or against gambling, but we’re concerned with the impact it has on people’s lives.
“The same is true of alcohol,” he continued. “Alcohol by itself is not an evil thing. But if it impairs a person’s life, there are consequences. We can say the same about food, exercise, anything.”
Russell agreed. “It’s just like with any sort of drug or alcohol,” she said. “Some people can take a drug or drink alcohol and be fine and cut themselves off. Same thing with gambling — some people do it just to be social, and it’s not a cause for concern.”
One challenge is for people to recognize they have a problem, Chandler said, and the first signs are always the financial repercussions.
“If someone has to borrow money or obtain money in a way that gets them into trouble, just to cover gambling debts or continue gambling, that’s a big sign,” he told BusinessWest. “If people lie about their gambling, where they were, or how much they won or lost, withholding that information from people, that’s a sign, too. In a lot of cases, other people recognize the problem long before the individual does.”
Theoretically, Western Mass. could see a rise in problem gambling from locals who join the ranks of casino addicts — typically, 10% of a casino’s patrons account for 90% of its revenue — but Russell stressed that the lure of gambling is as close as the nearest convenience store, and has been for decades.
“A lot of people don’t think about it because gambling is such a big part of society in general,” she said. “It’s even in the everyday vernacular — like when people say, ‘wanna make a bet?’ So they don’t realize how many people can’t control themselves. They just don’t understand it.”