BusinessWest Slates a 40 Under Forty Reunion for November 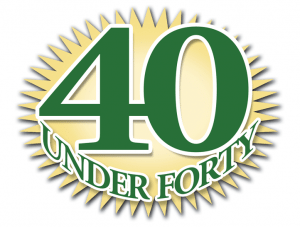 The 40 Under Forty class of 2012 has been saluted — see a photo montage of the June 21 gala at the Log Cabin starting on the facing page — bringing to 240 the number of people who are now in a rather exclusive club in Western Mass.
And with that critical mass, BusinessWest has decided that it’s time to bring the band back together, to steal a line from The Blues Brothers, with a reunion, slated for November 8, that will likely be the first of many, said Kate Campiti, the magazine’s associate publisher.
“Several people have suggested some type of reunion, and we were already thinking about how it would be great to bring the first classes of winners back together,” said Campiti, adding that the event will be a celebration of what is still very young talent in the four western counties of Western Mass., as well as a very unique networking experience, and perhaps a learning opportunity — organizers, including several past winners, are considering high-profile speakers from the world of business to address the group.
Details of the event will be forthcoming in the weeks and months ahead, said Campiti, adding that some things are known. The date is Nov. 8, the venue will be the Log Cabin Banquet and Meeting House, chosen for both its fine service and central location in Western Mass., and the guest list will be limited to the 240 winners, event sponsors, and program’s judges.
“‘Forty Under 40’ has become a symbol of excellence in this region, something people strive to achieve,” said Campiti. “And with six classes of winners, there is now a large, somewhat exclusive fraternity, if you will, that is quite diverse. But the members share one important quality — they’re all leaders — and it’s exciting to think about what can happen when you bring that many leaders together in one room.
“There is already a sense of camaraderie and mutual respect among the winners,” Campiti continued. “You can see this at the gala each year; people will note that someone is a previous winner and usually strike up a conversation.”
And more importantly, she went on, winners have done business with one another, sought out each other’s advice on matters, and, in general, shared opinions on the challenges and opportunities our region is facing.
“And bringing that much talent, that much insight, together can only be good for this area,” she continued, noting that the 40 Under Forty constituency now includes everything from partners in major law firms to a state senator; from thriving entrepreneurs to a high school senior — Stephen Freyman, class of 2011; from a host of non-profit managers to a police sergeant.
“The diversity and collective brain power present at a 40 Under Forty gala is amazing,” said Campiti. “Imagine what bringing six classes of winners together will be like.”
On Nov. 8, no one will have to imagine.