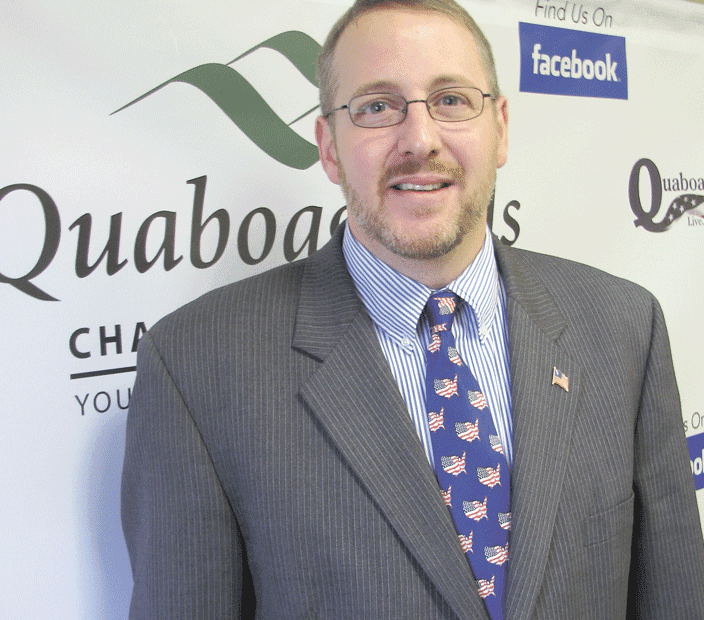 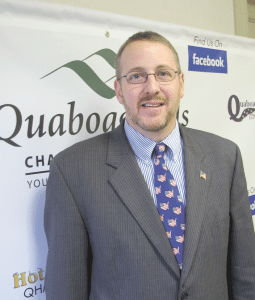 With the passing of gaming legislation, Lenny Weake says, the Quaboag chamber is now committed to fully harnessing whatever a Palmer casino would bring to the region.

When the state Legislature passed a comprehensive gaming bill last fall, it did more than usher in the casino era in the Commonwealth.
It also changed Lenny Weake’s job description. Well, sort of.
“Let’s just say they broadened it in a way,” said Weake, president of the Quaboag Hills Chamber of Commerce, which is headquartered less than a mile from where Mohegan Sun wants to build a resort casino on a hillside just off the Mass Pike exit in Palmer.
Elaborating, Weake said that, in the years leading up to that historic vote, the Quaboag chamber was in many respects a spectator on the gaming issue, taking a Switzerland-like stance of neutrality on a matter that sharply divided its membership. But with the passing of gaming legislation, the chamber understood that it could no longer stand on the sidelines, he told BusinessWest, adding that the issue now isn’t whether casinos are right for the state, it’s about jobs and economic development, the foundations of the chamber’s mission.
And, more to the point, it’s about effectively “harnessing” (a word Weake would use often) the vast potential for commerce and economic vitality that comes with a casino in one’s backyard.
“Everything has shifted … this isn’t about gaming anymore; it’s about what Palmer could be in the next five years,” he explained. “We’re not going to sit by and let this thing develop without making sure that we’re part of the process.
“Our role is changing; if Mohegan Sun is going to bring 4 million people into the region each year, we need to figure out how to work with those people and get those visitors off the mountain, in a sense, and get them into our communities,” he continued. We can’t let this economic development go by and not be a part of it, and not figure out a way to harness those 4 million visitors and have them explore the region.”
In recent months, this mindset has manifested itself in many ways, said Weake, but mostly through meetings with Mohegan Sun officials, town administrators, members of the Gaming Commission itself, and other players, including Northeast Realty, a development group that is advancing a number of additional development plans in and around Palmer, most of them contingent upon a casino being built in that community.
The broad assignment in each case, he said, is to make sure the Quaboag region’s business community has a voice in the proceedings, and that its interests are clearly understood. And in many ways, this simply represents a logical extension of the chamber’s ongoing work to promote and advance business in the region, Weake noted, adding that his work often comes down to putting the Quaboag area on the map — in a figurative sense.
Indeed, one of Weake’s priorities since he arrived at the chamber more than a decade ago has been to create and expand initiatives that will help people discover this region that lies roughly halfway between Springfield and Worcester and boasts attractions ranging from the Quabbin Reservoir to the giant antiques show in Brimfield — and, while doing so, support its businesses.
His latest effort in this regard is what he calls a “treasure hunt.” Still very much a work in progress, the initiative, based loosely on the hobby known as letterboxing (in which small, weatherproof boxes are hidden in publicly accessible areas, with clues distributed about how to find them), is designed to encourage people to get out and explore a region still in many ways saddled with the label ‘best-kept secret.’
“We want to expose people living right in our region to all there is to see and do here,” said Weake. “And while they’re out exploring, we want them to experience the restaurants we have here and other types of businesses and attractions.”

Exploring All Options
As he talked about the Quaboag chamber, Weake said it is similar to most such organizations in the Bay State, but has some unique challenges.
First, there is its sheer size; it stretches from Palmer east to Spencer, just outside Worcester, covering three counties (Hampden, Hampshire, and Worcester) and two area codes, a region covered by 10 different newspapers. Meanwhile, the communities represented by the chamber — Belchertown, Brimfield, Brookfield, East Brookfield, Hardwick, Holland, Monson, New Braintree, North Brookfield, Palmer, Spencer, Wales, Ware, Warren, and West Brookfield — are small (total population is about 36,000), and the business community is dominated by small (in most cases, very small) businesses.
Many of the communities, including Palmer and Ware, are former manufacturing centers trying to reinvent themselves and attract new sources of jobs, with many focusing on tourism.
As a result, much of the chamber’s work involves promoting and branding the region, and thus driving visitorship, said Weake, citing the Brimfield antiques shows, which the chamber promotes extensively through its Web site, as one primary example. The chamber also prints an annual recreation guide, which includes information on accommodations, attractions, events, farms, orchards, restaurants, shops, and more.
The ‘treasure-hunt’ concept is the latest manifestation of these efforts, he said, adding that much of the Quaboag region, despite the chamber’s best efforts, remains an unknown quantity to many Baystate residents. By compelling area residents and visitors to look for the various clues, the chamber is expecting them to learn about the area, individual communities, and, yes, specific businesses.
“We want to create something that will make people search through the region, learn about history, learn about the towns, but also have fun doing it,” he said, adding that the chamber is working to create what he called a prototype involving the town of Monson. “We want to come up with a treasure hunt, where, in the process of finding clues, people can learn all about this area.
“It’s in its beginning stages — we have to develop the concept, and then we have to sell it,” he continued, adding that the program will be akin to but not exactly like letterboxes. “We want people to see what we have; we want them to learn about people like [Hall of Fame baseball owner and manager] Connie Mack, who grew up in Brookfield.”
But there is much more to the chamber’s work than tourism, said Weake, adding that services to members have included everything from assistance in the wake of last summer’s tornadoes (Monson and Brimfield were especially hard-hit) to an annual resources directory, to a concept called Hot Deals, which enables businesses to post promotions on the chamber’s Web site.
The passing of gaming legislation last fall simply adds another comprehensive layer of advocacy to the chamber’s workload, he said, adding that the coming months will be both exciting and challenging.
Summing up the chamber’s involvement in the broad gaming issue, Weake repeatedly came back to that notion of harnessing everything that casinos bring to the table, from those projected 4 million visitors to actual commerce (hopefully to be conducted with local vendors), to hundreds of employees, many of whom might need a map to find Palmer.
“When Mohegan goes out to bid on products and services, we want to make sure that our businesses can competitively bid,” he explained, citing just one example of how the chamber will attempt to assist Quaboag-area companies and make sure their voices are heard. “We want to be able to educate businesses on how to work with Mohegan.”
Another example, he went on, is the point systems used by casino resorts to reward repeat customers. “We want to work with Mohegan and try to make sure businesses in this region can redeem those points,” he explained, “so people can go to the Salem Cross Inn [in Brookfield], for example, with points they’ve earned in Palmer.”
Weake said that individual casino developers looking to win the approval of the five-member Gaming Commission must make their applications as attractive as possible, and a big part of this involves commitments to partner with the community as a whole and the business community as well.
He said part of the changed, expanded role for the Quaboag chamber is to shape those partnerships in mutually benefiting ways.

Doubling Down
Weake stressed repeatedly that the chamber’s current work with regard to the matter of gaming should not be described as efforts to support a casino in Palmer. Rather, it is about job creation, economic development, and giving the business community stretched across those 15 Quaboag towns a strong voice in the matters of the day.
In that respect, the Legislature’s vote last fall did not technically change his job description — it merely added many new dimensions to what he was already doing every day.
And there’s a good bet — literally and figuratively — that these efforts will only become more elaborate, and intriguing, in the months and years to come. 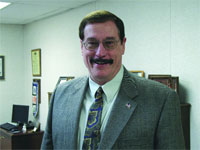