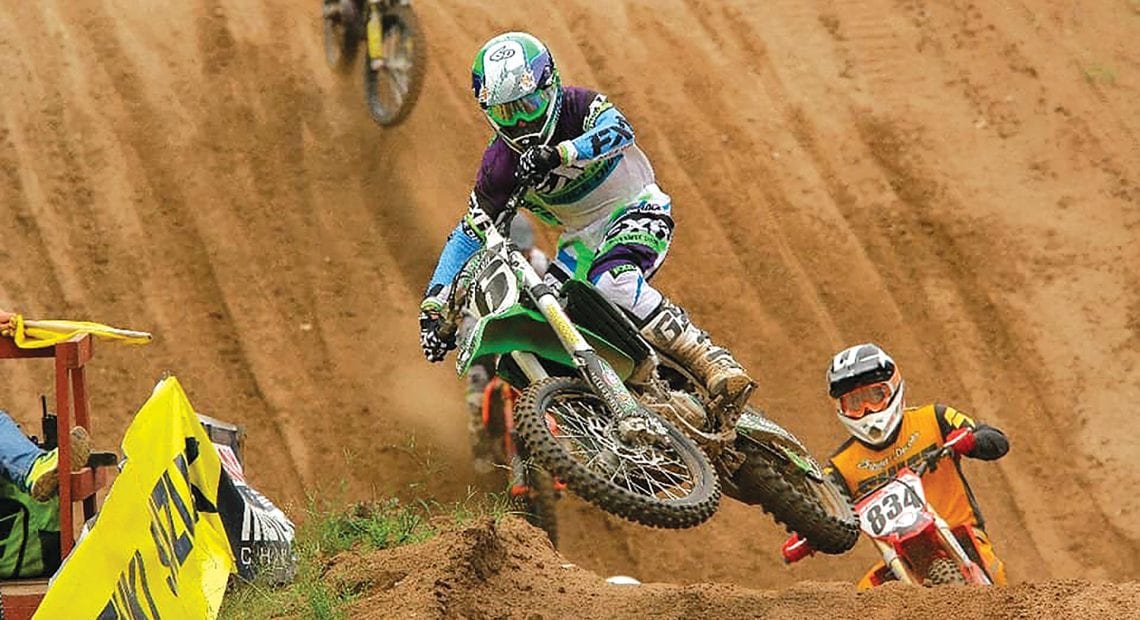 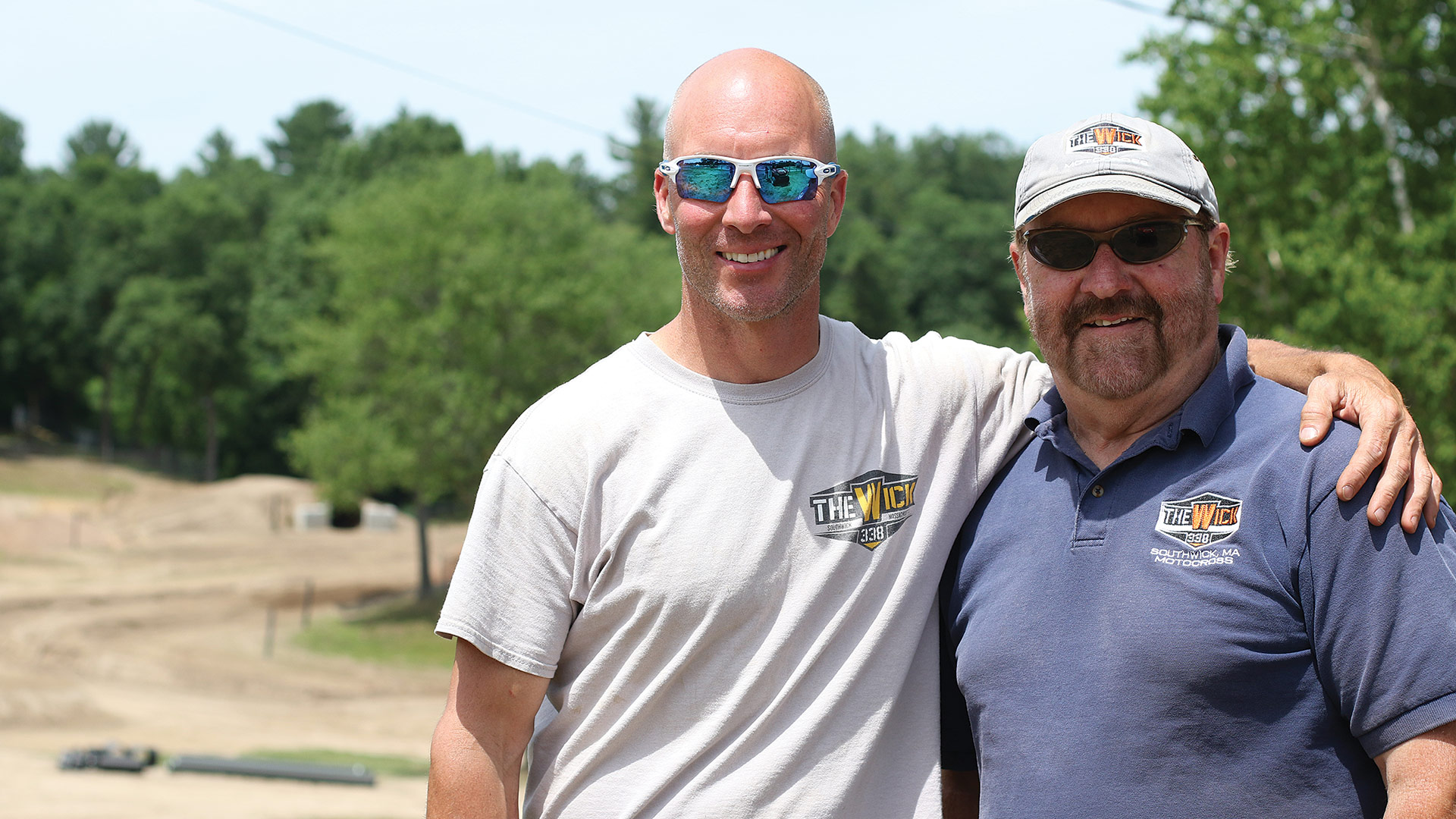 Keith Johnson (left, with Rick Johnson) says his passion for the Wick 338 stems from his own participation in the sport of motocross.

Motocross in Southwick is nearly a half-century-old tradition. It’s also a business and a well-tuned economic engine. Like the sport itself, this local enterprise has endured some ups and downs, twists and turns, but, thanks to a father-son team, it is now hitting on all cylinders.

When Rick Johnson relates the history of the Wick 338 motocross track in Southwick, he notes that he never thought he’d be managing the production of a national championship — let alone four of them.

But that’s what has transpired in what can only be called the latest chapter in the story of motocross in this town, perhaps best known for other forms of recreation, specifically those involving the Congamond Lakes, which give the community so much of its character.

It’s a story that, like the sport itself, features a number of twists and turns, ups and downs. With that, Johnson, track manager for the facility, flashes back almost a half-century, to 1972. That’s when the very first Southwick motocross race was held, just a few miles from the location of the Wick 338 track on Legion Road in Southwick, as in American Legion Post 338. Hosted by the New England Sports Committee (NESC), the race was held to benefit the Jimmy Fund and other town charities.

“Obviously there’s an economic spinoff, especially when you have a national race where you’re bringing thousands of people into town.”

The event was a huge success, and members of the Legion quickly developed an appetite for more motocross.

Fathers of NESC racers set their minds on building a track of their own and constructed the first version of what now stands at the Wick 338. Led by Bernie Yelin, Pat Smith, Ray Peebles, Dante Molta, Clovis Goyette, and many more, the Wick, as it would come to be called, would bring races, and then a national championship, the first in 1976, to the community. But it also brought much more, including large crowds of people and support for many kinds of businesses, especially those in the hospitality sector.

Then came some of those twists, turns, and dips. Indeed, after the 2012 national championship, the race was taken from the Wick because the track’s condition had deteriorated. Soon, the entire operation was in danger of being closed.

That’s when Mike Grondahl stepped into the picture; he worked out a lease with the American Legion to put it back in business.

The former Planet Fitness CEO had a great love for the sport of motocross, but due to a business investment he made prior to his deal with the track, he did not have the time to maintain it properly, and the track lay dormant.

Luckily for him, he knew a family who also loved the sport.

“He called me, and we agreed to do it — but not with the intent of having a national championship here,” Johnson told BusinessWest. “We just wanted to build the best track for the Northeast.” 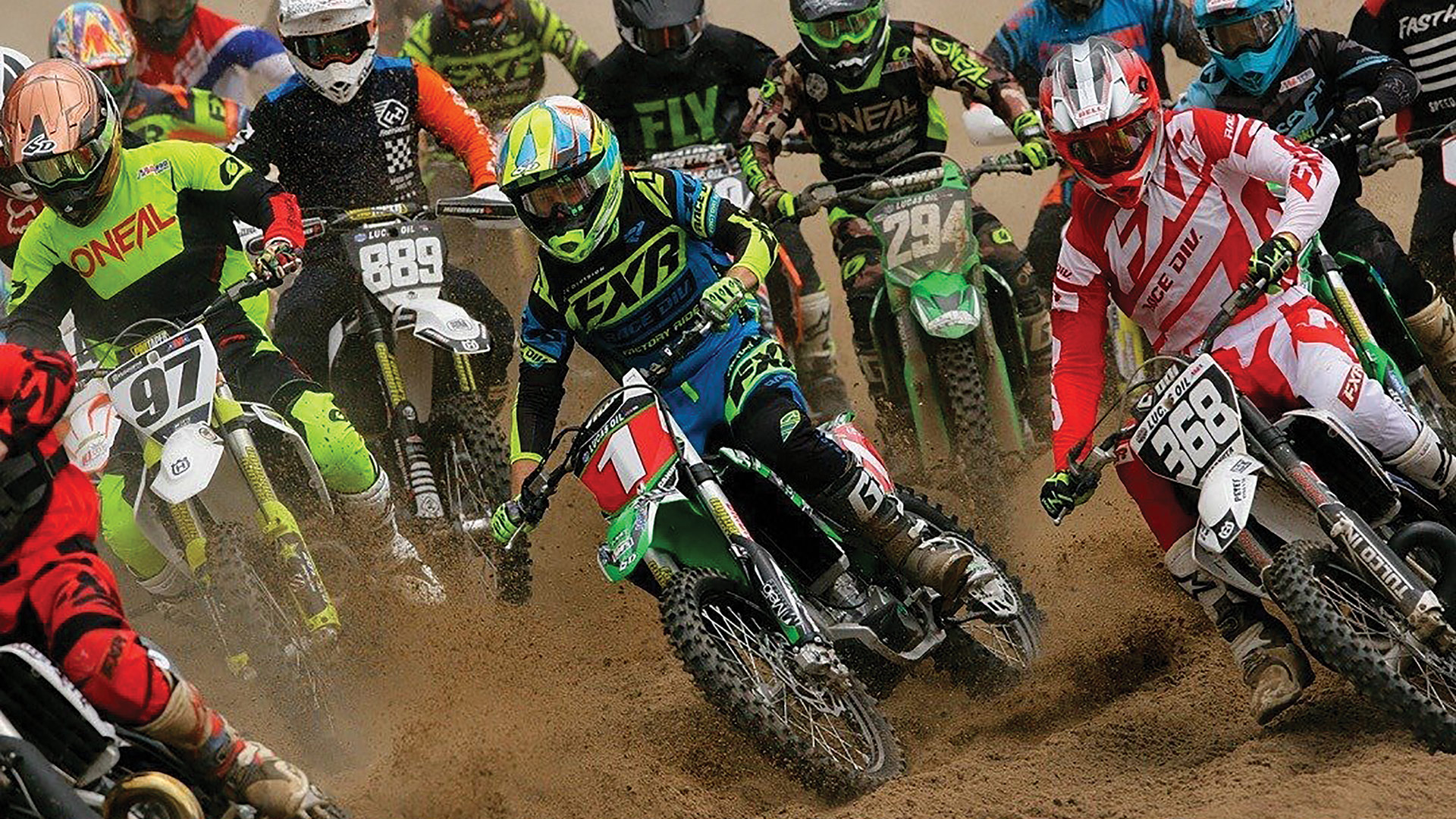 Chris Canning (center) is the reigning motocross champion in the Northeast.

While Grondahl originally reached out to Johnson’s son, Keith, now president of the Wick 338 Promotions LLC, the father-and-son duo agreed that the best way to maintain the track was to work together. Rick would help with the business plan and work with the town, acting as the front man, and Keith would take care of things at the track.

Together, their goal was to bring the track — and the business — back to the high level of success enjoyed decades ago. And, generally speaking, they’ve succeeded in those goals, as evidenced by the national championship staged there just over a week ago. The seventh round of the 2019 Lucas Oil Pro Motocross Championship put an exclamation point on what would have to be called a comeback for motocross racing in Southwick.

For this issue and its focus on sports and leisure, BusinessWest talked with the Johnsons and others within the community, and learned that motocross is more than a popular spectator sport; it’s also a driving force when it comes to economic vibrancy in Southwick.

The national race at the Wick 338 proves to be one of the most physically grueling races for those competing, each twist and turn more challenging than the last.

But this is not the only event that happens at the track.

Rick Johnson said the site hosts more than 40 events throughout the year, each one bringing between 500 and 3,000 people to town.

“It’s great for the town, not just because of the national, although it brings in 15,000 people in that one day,” said Keith. “For the most part, the town is a huge supporter of the entire facility.”

He noted that many business owners even plan around the track’s events.

“When I give my presentation to the town and give them my schedule, there are so many local shop owners there to learn what the schedule is all about so they can plan,” he told BusinessWest.

Southwick Selectman Joe Deedy can attest to this, and said the town simply wasn’t as vibrant when motocross races weren’t staged for a few years. “When motocross went away a couple years back, you could see a ton of people were so disappointed overall.”

Deedy also recalled that, in the old days, competitors would just show up and enjoy the race. Now, a race team might have five or six promoters they are dealing with, bringing in even more business to the local community.

“Every local little mom-and-pop business or even bigger facility that does catering, chances are, they are there catering to one race team or another,” he said.

Deedy and other town selectmen, Doug Moglin and Russ Fox, spoke highly about the track and the effect it has on Southwick, noting that everything from gas stations to breakfast shops do better business when there is a race in town.

“Obviously there’s an economic spinoff, especially when you have a national race where you’re bringing thousands of people into town,” said Fox, who has been a selectman, off and on, for nearly 40 years.

Among those people who came to town for this year’s national was a large crew from NBC, which broadcast the race nationally. This exposure, said Fox, helps bring in more people and shines a light on Southwick, home to about 10,000 people. 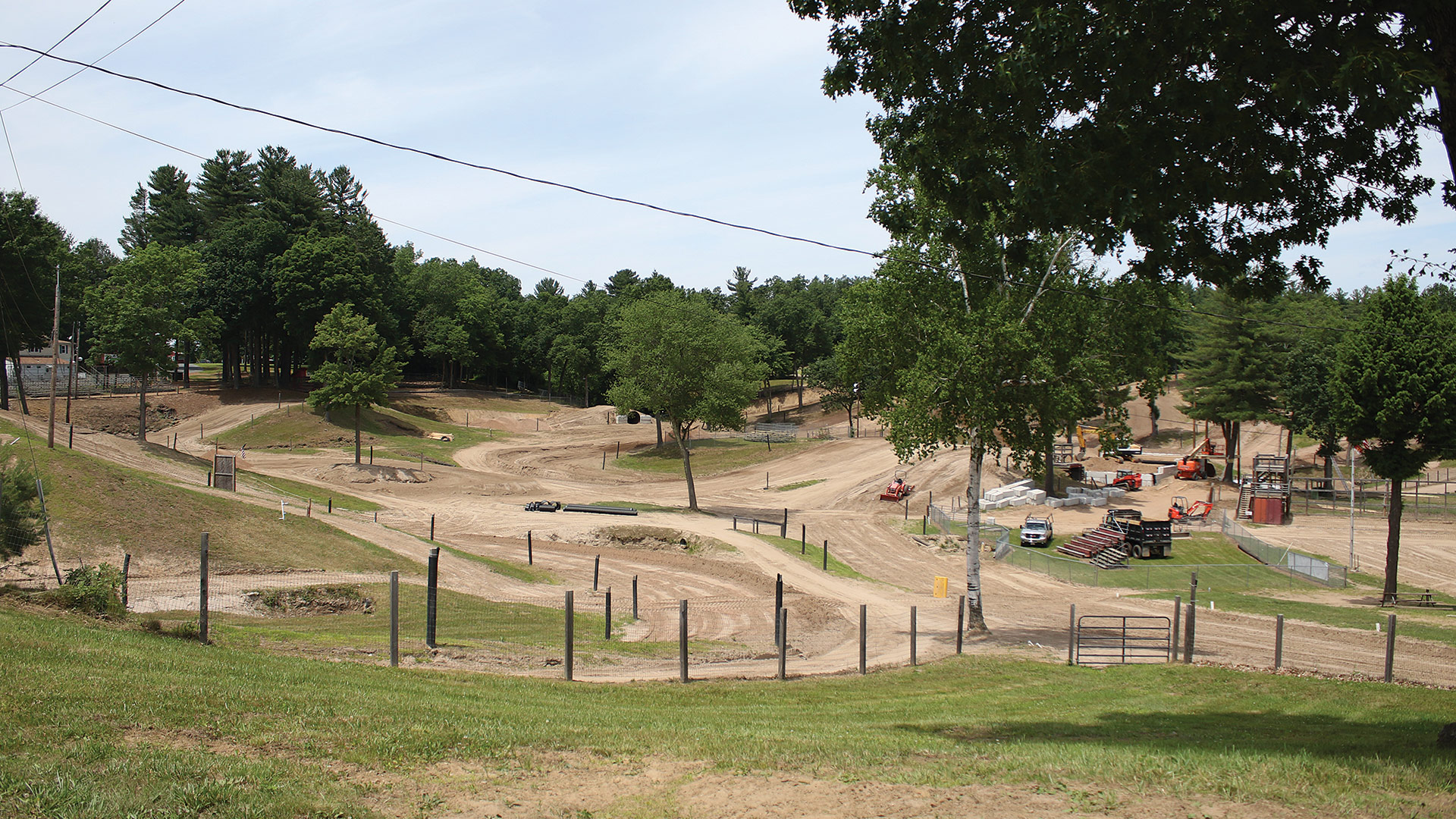 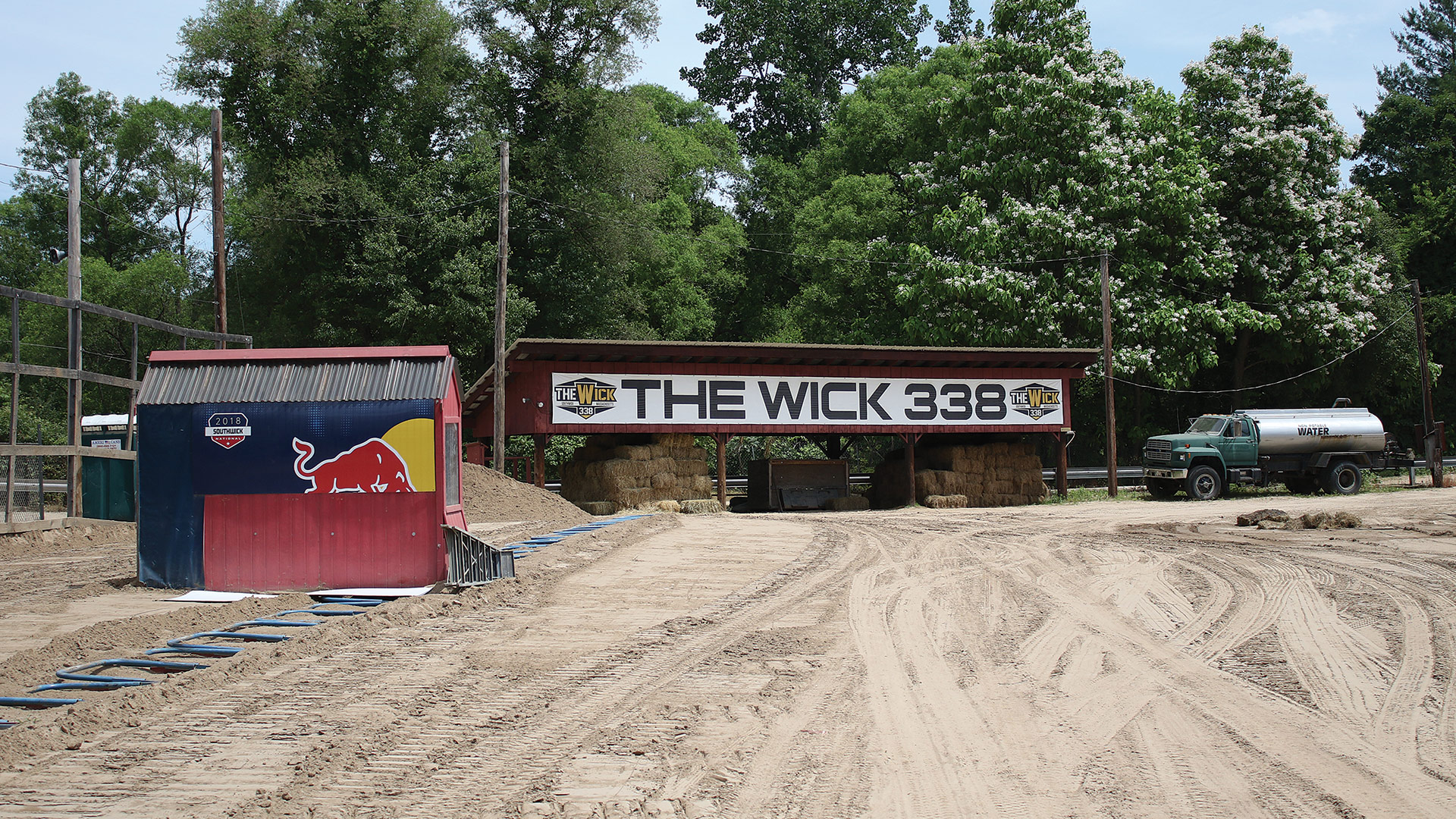 The Wick 338 hosts more than 40 events throughout the year, from small races to the recent national event that brought 15,000 people to town.

A national race like the one on June 29 brings in a crowd larger than the community’s population, drawing some traffic and maybe a few headaches, but any negatives are far outweighed by the positives, said those we spoke with.

Indeed, Moglin said, even during an event like the national, someone passing through Southwick wouldn’t know the event was going on, making the track a good neighbor.

Because the town has hosted the event several times before, the accumulated experience helps all those involved put on an event with minimal negative impact within the community, Moglin said, noting that the hour before the event and when it finishes are the only times traffic gets backed up, and additional law-enforcement services are not needed on the streets to help manage the crowds.

While things may be quiet on the road, the track is always bustling.

Referred to as the Fenway Park of motocross, the Wick 338 hosts everything from open practices to Rugged Maniacs to an event known as Southwick Day. Track managers even volunteer their starting line to light off fireworks on the Fourth of July.

Before Rick and Keith hosted their first national event, they knew they needed to upgrade the track in order to make it the best of the best. This included installing new tunnels under the track, trimming trees to make the facility more viewer-friendly, close to 3,000 feet of fencing, a new irrigation system, a brand-new scoring and announcing tower, and more. Four days before the 2019 national, 20 truckloads of dirt were brought in.

These are just a few of the things it takes to run a successful track — and they aren’t cheap. Rick said he knew that, if the Wick charged for general admission only, it would be difficult to generate the revenue needed to pay for the upkeep of the track.

That’s why he got creative and introduced VIP seating.

“We looked and found areas of the track that weren’t being utilized, and we invested in those areas to create VIP sections,” he said, adding that these areas around the track allow ticket holders to get a whole new experience and greatly increase revenues; VIP tickets range from $90 to $375 compared to the general-admission price of $45.

All these investments have led to a four-year run of nationals for the father-and-son duo.

Before Rick and Keith took over at the Wick 338, chain-link fences stood six feet high, and tall trees made it difficult for viewers to truly feel like they were a part of the action. Now, motocross fans have the opportunity to see the dirt flying up-close and personal.

“Those were the things that we felt took away from the character of the New England track,” said Rick. “It was our intent to bring it back as it was back in the ’70s that everybody loved so much, and make it safe.”

They’ve succeeded in that mission, and in the process, they’ve helped rev up the local economy — literally and figuratively. 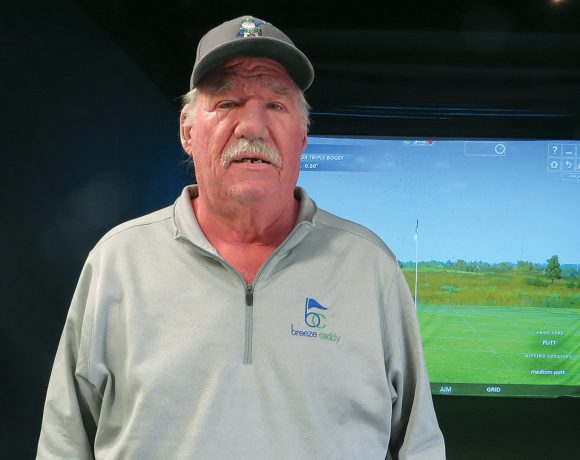 Simulators Have Become a Solid Addition to the Business of Golf