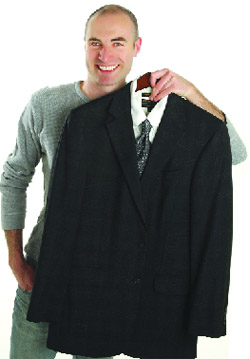 Because he is active in Northampton both professionally and culturally, Owen Freeman-Daniels says there are times when people don’t recognize him when he’s wearing a suit. Explaining his decision to bring a separate suit of clothes for his photograph, he said that, “in many ways, I have two lives.”

First is the life of a businessperson who is both responsible for millions of dollars in assets and protecting people’s assets and homes. “And then when I get home,” he continued, “I get out of that suit as quickly as possible, put on a T-shirt and jeans, and go back out and work in my neighborhood. Most people that I do community work with don’t have any idea what I do for a living.”

And both lives occupy similar importance for Freeman-Daniels. His role in the small firm of Foley-Connelly Financial Partners has been expanding for the past nine years, and he says that he “couldn’t be happier,” as he straddles the two fields of finance and insurance.

Then, in his words, there’s that “other life,” where he is, among many other things, the chair of the Northampton Education Foundation’s endowment distribution committee, board member of Valley Time Trade, and vice president of the city’s Ward 3 Neighborhood Assoc. — not to mention an active participant of the city’s vibrant arts scene, quite literally.

One eight-hour performance-art piece was called “The Secretary,” and Freeman-Daniels said that, for that time, he sat at a typewriter and, in single-spaced paragraphs, tapped out his thoughts. “I think it was pretty successful, and it wasn’t gibberish. I’ve got a lot on my mind!” he laughed.

But his goals for the upcoming years are for his suit to cross paths with his casual life more often. “My community interests are in having a vibrant wealth of arts, culture, and support to continue doing interesting things here,” he said. “I’ve been laying the groundwork with everything I’ve done so far. I’m just now getting above the foundation.”