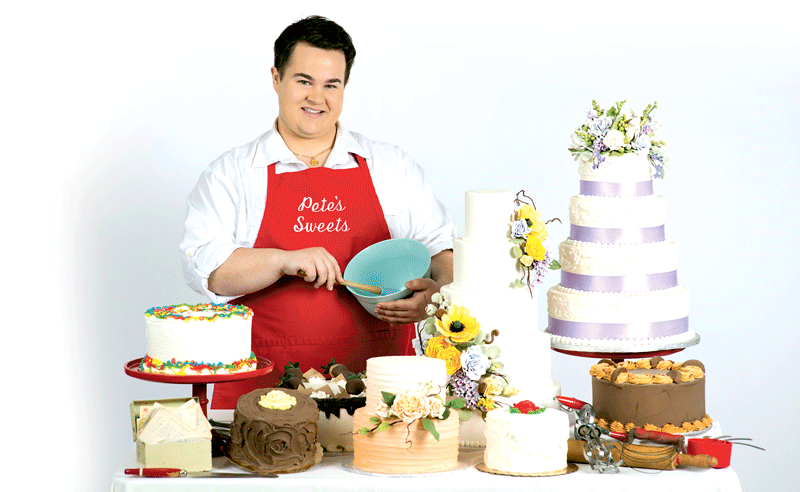 Peter Gray wasn’t long out of culinary school when he found his way onto Next Great Baker, a cooking-competition show on TLC hosted by “Cake Boss” Buddy Valastro. But, perhaps due to his youth, he didn’t feel stressed.

“I was there to learn and have fun,” he recalled. “All the others were there to win $100,000 and keep their failing bakery alive so they could feed their family.”

Indeed, he did not win, but during one of his weekly visits to a WMAS morning radio show to discuss the previous night’s episode, the topic of starting his own business came up. He had been putting out feelers to find a job working for someone else, but instead wound up moving into space in East Longmeadow where a gelato outfit operated during the summer. Since then, he’s not only taken over the whole property, but has expanded three times.

Gray has been passionate about baking from a very early age. In fact, he presented an oral report in fourth grade on his future company, which he then dubbed Peter’s Sweets; the teacher of that class is one of his customers today. And through high school, he made birthday cakes for friends as a side hobby. So perhaps owning his own shop was inevitable.

“It’s such a celebratory business,” he said. “Florists have to deal with funerals, but we just deal with celebrations — weddings, baby showers, anniversaries, birthdays. And we don’t sell coffee here, so we don’t have angry coffee drinkers in the morning. No one comes in angry for a cupcake.”

Gray is especially gratified when customers come in again and again. “I’ve done baby showers, then that child’s first birthday, then the second birthday. And I want to be the baker who bakes that child’s wedding cake.”

Environmentally and civically minded, he follows a compost food-waste and recycling policy and hosts food drives for area pantries, and also donates time, resources, and, yes, sweet stuff to various nonprofits and community organizations, as well as the East Longmeadow Police Department, which gets a delivery each month as a thank-you for responding to the needs of his hometown.

Growing up in East Longmeadow, Gray recalls helping out in the kitchen at age 5. “My mom would always joke, ‘I’m not a baker; I don’t know where he got this.’”

It’s more clear where he’s taking it — to new heights of sweet success.