Greg Stutsman and George Myers say the Quarters is intended to appeal to a wide range of people, from kids to college students to adults who crave a nostalgia fix.

George Myers and Greg Stutsman didn’t spend the early ’80s in arcades; they were toddlers when the arcade craze peaked in 1982 and 1983 before collapsing alongside the boom in home consoles.

So they don’t remember first-hand the thrill of mastering Ms. Pac-Man and Q*bert and Donkey Kong and dozens of other titles from that golden age. But they experience it vicariously every day at the Quarters in Hadley, watching 40-somethings light up with nostalgia at the old games while their own tweens, raised on the hyper-realistic games of the 21st century, discover the simple charms of these retro titles for the first time.

“A lot of people say our games are obsolete, and one reason is home-gaming consoles,” said Stutsman, who opened the Quarters with Myers in January 2014. “But the thing that’s missing is being in the physical space, enjoying the games alongside other people. Here, they can play one game, move to another — it’s a more energetic space.”

The pair had known each other for 12 years through event production, mainly music shows, and began talking about going into business together. The original idea was a music venue with food and drink and maybe a few arcade games, and they visited several potential locations before their current neighbor, who runs a tattoo business next to the Quarters, told them about the available space, which used to house a café and a furniture gallery.

It didn’t work as a music venue, but Myers and Stutsman saw plenty of potential for both nightlife and weekend traffic, and the Quarters concept began to take shape.

“We’ve seen an emergence of destinations like this, arcade bars,” Stutsman said. “A lot of places focus on nightlife, a young, creative crowd, but we saw an opportunity for a more inclusive place, where we could include a broader community than the college-student nightlife crowd.”

Myers recalled with a smile how friends they’d go out with would complain when he and Stutsman criticized how a venue was laid out and how they’d do it differently. When they had their space, and saw how it bordered the region’s main bike trail and was close to both Hadley’s downtown area and area colleges, they recognized that the games should be the main draw, with their appeal to multiple generations.

And so they are — almost two dozen at any given time, ranging from 1978’s Space Invaders to a few from the early ’90s, but mainly hailing from that early-’80s golden age.

“We liked the idea of creating a space that was special in nature and provided opportunities for people to bond over their shared love of these retro games,” Myers said. “We wanted to make sure it was exciting and interesting for a lot of different people.”

Some patrons might be drawn by theme trivia nights, he went on, while kids tend to pour in on weekend mornings and early afternoons. “We want all these different people in this space. At its core, it never stresses one thing, and we make sure no one feels alienated or unwelcome.”

Word on the Street

After deciding on their concept, the owners relied on an Indiegogo campaign to raise money to buy the initial machines, which got the word on the street that a retro arcade was coming. That turned out to be a positive development, even when the opening took longer than expected.

“All businesses take longer than people think to open, and we started advertising pretty early,” Stutsman said. “But that was to our benefit. People knew about us; the word was out. We were often telling people, ‘next month it’s going to happen.’ And when we did open, we were busy from day one.”

Myers said he and Stutsman deliberately crafted their business as a space where everyone could come and feel comfortable. It’s a popular booking spot for kids’ birthday parties, and weekly Super Cereal Saturdays, which feature unlimited tokens, a cereal and milk bar, and ’80s and ’90s cartoons, are well-attended.

“It’s a place for 11-year-olds and people who remember being 11, and may be in their 30s or 40s with their own kids,” Myers said. “People on the bike trail might stop by for lunch. At night, it’s a little more bar-oriented crowd. In the span of 24 hours, so many different types of people can come here and enjoy it on their own terms. We went through great pains to make that happen.”

As for the food, it’s not an afterthought, said Stutsman, who ran sandwich shops in Northampton in a previous career. “We’re happy to see the recognition it’s getting. People are really happy with the food. For us, it’s an important piece of the puzzle, and a lot of thought was put into that.” 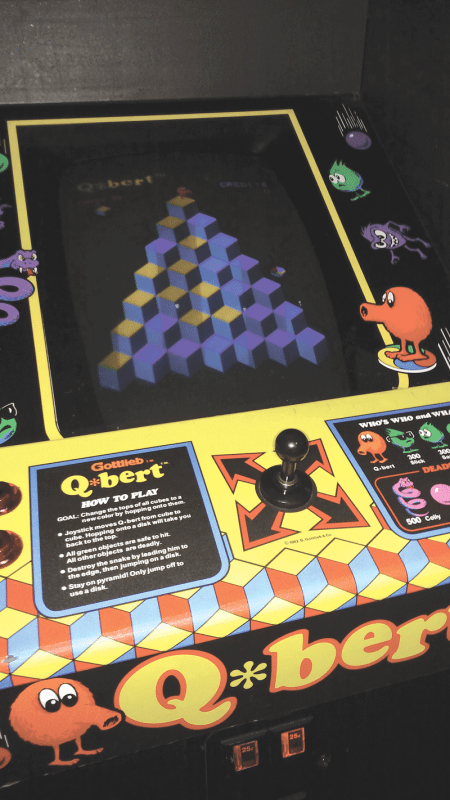 Myers and Stutsman get a kick out of seeing parents introduce their kids to the games they grew up with, like Q*bert, Ms. Pac-Man, and Burgertime.

The menu features food that can be carried around while patrons play games, but with a twist. For example, a series of small, locally made hot dogs, or ‘pups,’ come in varieties ranging from the classic New York pup to a kimchi pup and a banh mi pup. At the other end of the taste spectrum, the place was packed for a recent vegan night, which featured a wide-ranging menu of all-vegan fare.

But the games themselves are the main draw, and they’re not as difficult to find as one might think, Stutsman said. Craigslist was an obvious starting point, and in the four years since they began collecting the machines, they’ve come to know a network of sellers across the country — some in the Western Mass. region — so the task of replacing games and adding to their collection has become easier.

When they sat down with BusinessWest, the Quarters had 22 games on the floor and another 35 in storage. Games are rotated in and out on a regular basis, both for repairs and simply to maintain variety for players.

And, yes, the games do need repairs. Over the years, they’ve learned enough to fix some issues themselves, while others require outside repair experts; some are hobbyists, others electrical engineers with an interest in vintage games.

“Games do break, and we try to stay on top of that,” Stutsman said. “This is not a museum.”

Some video-game collectors, he elaborated, display their machines as showpieces, not meant to be played, but the games in the Quarters are meant to be used, and used a lot, and their moving parts often require maintenance. “These aren’t like the collector’s pieces you’ll find in someone’s basement.”

Myers and Stutsman knew their concept was a winner after the success of their Indiegogo campaign and the initial crowds, which haven’t dampened. They recognize they’re giving something valuable to their customers: a chance to relive fond memories and create new ones.

“One of the neatest things for me is to see the joy on people’s faces when they walk in here,” Stutsman said. “It’s a pretty special place — not just because it’s a room full of arcade games, but because of the atmosphere. On the flip side of that, all the work that goes into it is hard to overstate.”

“It’s much easier to talk about the fun aspects as the years move along, but opening it was a challenge, a lot of sweat equity,” he told BusinessWest. But he’s gratified to see the sheer range of people who come in every day — kids and their parents, teenagers, college students, young professionals — all with a shared love of playing retro games and soaking in the distinctly ’80s vibe. Here, after all, is a place where the arcade industry never disappeared, where people still patiently line up for their turn on Galaga or Arkanoid or Burgertime.

“I love seeing a dad in his 40s introducing his daughter to the game he was so great at — and the daughter turns out to be better than he is,” Myers said.

“That’s a great experience,” Stutsman added, “sharing that joy, seeing someone experiencing a game for the first time.” 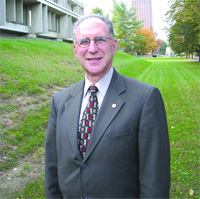 It Will Be a Real Draw