BusinessWest to Present New Award to 40 Under Forty Alums 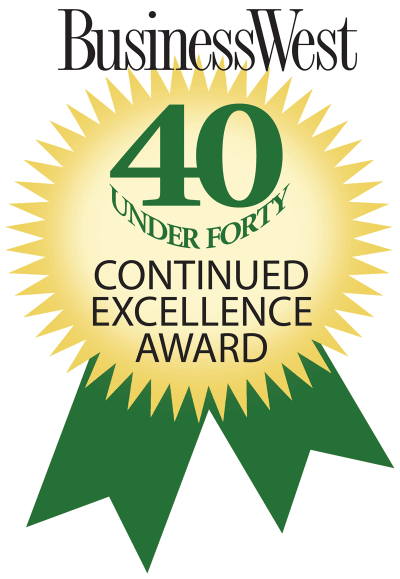 When BusinessWest launched its Forty Under 40 program in 2007, it did so to identify rising stars across our region — individuals who were excelling in business and through involvement within the community — and celebrate their accomplishments.

Today, BusinessWest is announcing a new award, one that builds on the foundation upon which 40 Under Forty was created. To nominate someone for this award, go HERE. To review an honoree’s profile piece from the year they were honored go HERE.

It’s called the Continued Excellence Award. Sponsored by Northwestern Mutual, this honor, as the name suggests, will be presented to the individual who, in the eyes of a panel of three judges, has most impressively continued and built upon the track record of accomplishment that earned them 40 Under Forty status.

The award will be presented at this year’s 40 Under Forty Gala on June 18 at the Log Cabin Banquet & Meeting House, and will providing a fitting climax to what is always a memorable evening.

This will be a nomination-driven process, with nominations due to BusinessWest by 5 p.m. on May 22. Eligible candidates are those from all eight 40 Under Forty classes prior to the current year.

BusinessWest will announce this year’s judges in its May 4 issue. Judges weighing the nominations received will consider:

The judges will first narrow the field of nominees to five candidates, who will be informed that they are finalists for the coveted honor — an accomplishment in itself. The judges will then choose a winner; the identity of whom will not be known to anyone but the judges until the night of the event.

Kate Campiti, associate publisher of BusinessWest, said the award was created to recognize those who have taken already-impressive résumés — it takes one of those to become a 40 Under Forty honoree — and committed themselves to add new lines to it.

“All of our 40 Under Forty honorees — and there are, with this year’s class, 360 of them — are leaders; they excel in their chosen profession, and they give back within the community,” she said. “This award seeks to identify those individuals who continue to build upon their track record of excellence and find new ways to improve quality of life in this region.”

Kate Kane, managing director of the Springfield office of Northwestern Mutual, presenting sponsor of this year’s 40 Under Forty program and this new award, agreed.

“The 40 Under Forty program has provided this region with an effective vehicle for recognizing those individuals across Western Mass. who are doing great things, and doing them at a relatively young age — accomplishments that often go unrecognized,” she said. “With this new award, we wanted to go a step further and recognize individuals who have made an even deeper commitment to this region.”

While doing all that, the new award will certainly build upon the excitement and prestige of the 40 Under Forty program, and add still another level of suspense to what is already one of the best-attended and most anticipated events of the year.

“This should provide a thrilling climax to what will be a great night,” said Campiti. “This is an event people wait for all year, and now we can add still another layer of excitement.”