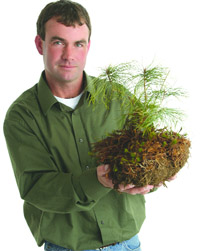 Shane Bajnoci says there’s some science associated with sustainable forestry, but it’s also a bit of an art. “It’s a forever-changing job, and I’m always trying to explain it to people so they understand what we’re doing,” he said, noting that it all boils down to managing a resource — the region’s large, but not limitless, supply of forest land — so that the needs of current and future generations can be met. Bajnoci started his career at Cowls Land and Lumber Co. 12 years ago after earning a bachelor’s degree in Forest Conservation at UMass Amherst, and since then, his responsibilities have only grown. He leads a crew of 14 that harvests and manufactures some 2 million board feet of logs and lumber per year, while also managing thousands of acres of land and their boundaries in nearly 30 towns across the region. His post also requires completing countless pages of state and federal paperwork, drafting management plans for the year, contracting with local loggers and truckers, and cultivating a small Christmas tree farm. Bajnoci also sits on several industry-related boards, including the Mass. Wood Producers Assoc., the Mass. Assoc. of Professional Foresters, and the Pelham Forest Conservation Committee. But despite this workload, Bajnoci added another bullet to his resume this past year, leading Cowls’ participation in the Inaugural American Woodcock Initiative. The business joined forces with the Mass. Division of Fish and Wildlife, the Ruffed Grouse Society, and the Wildlife Management Institute to launch the program, which focuses on habitat-management efforts that can curb the decline of various wildlife populations in addition to the woodcock, such as the New England cottontail, wood turtle, and gold-winged warbler. Bajnoci has incorporated initiatives that benefit these species into his annual plans, and, in 2007, garnered a Forest Stewardship Award for his company from the International Assoc. of Fish and Wildlife Agencies. “I hope others can use us as a model for habitat management,” said Bajnoci, “and I want to create more habitats that would support certain species, especially birds. It’s a lot of work, but it’s also my passion to do long-term land management, so I’m glad I have a place to do it.” And while much of his job revolves around cutting down trees, he’s also planting important seeds, and watching them grow. Jaclyn Stevenson
Tags: