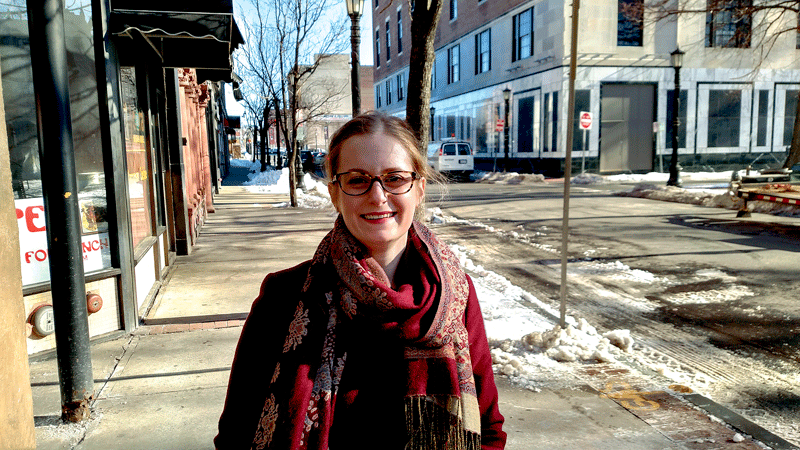 As director of the Springfield Central Cultural District, Morgan Drewniany doesn’t see the arts in a vacuum. Rather, they’re one of the connecting threads joining the realms of economic development, social justice, and a city’s walkability and livability, which are, of course, among the keys to any community’s future. To that end, the SCCD is raising the profile of the arts in and around downtown Springfield — and that of its myriad artists as well.

Morgan Drewniany recognizes the connections in her passions. That’s why she doesn’t think it strange that she went from studying soil chemistry at Hampshire College to leading the Springfield Central Cultural District (SCCD).

The specific connecting fiber is a passion for improving society. For example, to write a thesis on the political and physical environment in Northern New Mexico, she stayed on a reservation there, and later brought 200 soil samples — packed into the back of her Volvo — on a cross-country trek back to Amherst.

When she thinks back to her early interest in environmental health and social justice, “what I loved most was working with economically disadvantaged communities, those with lower education levels, lower income levels, communities of color in general. So, when I looked for a job, I didn’t look in the science field; I looked in art and nonprofits.”

The job Drewniany found was assistant director of the Springfield Business Improvement District. “It seemed like a good fit,” she told BusinessWest, explaining that the idea of lending her skills and passions to economic development appealed to her, particularly in the City of Homes. “I grew up in Westfield, and my parents brought me to Springfield all the time as a kid, to the museums or the symphony — I thought it was the coolest place ever. So to come back and help out during its revitalization was really gratifying for me.” 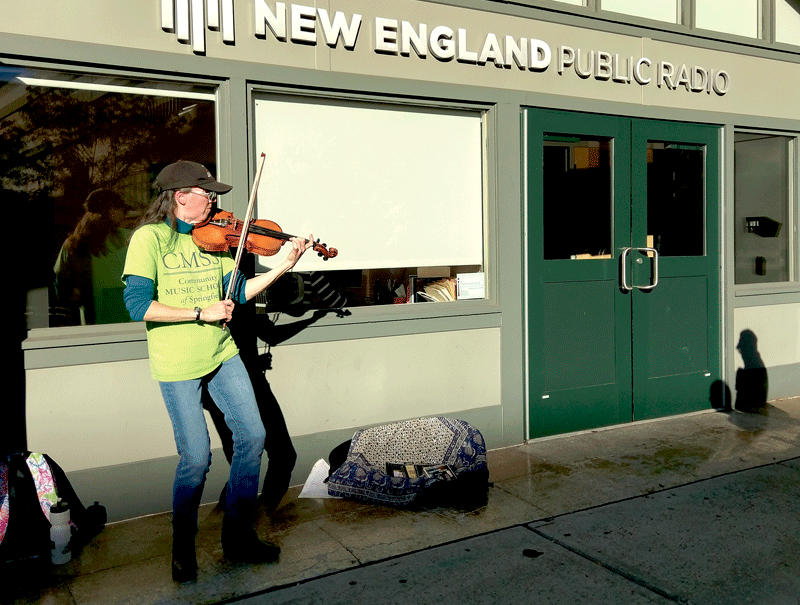 But another opportunity would emerge that she’d find more intriguing. In 2013, the Massachusetts Cultural Council introduced the Cultural District Program as a way to brand areas densely populated with architectural, historical, and cultural assets. A consortium of cultural entities in Springfield applied for the designation, launching the SCCD in 2014. A year later, the organization sought a new director.

“When the opportunity came up, I knew the players, I personally have a passion for the arts, I have a lot of friends who are artists … it was a pretty natural fit,” Drewniany said, adding that she was drawn by the district’s untapped potential. “We were still applying for 501(c)(3) status, finalizing our bylaws and structure, a lot of internal stuff … it was a really exciting time. Now we know who we are. We want to be a unified voice for arts culture, not just within Springfield, but statewide, and even nationally.”

Today, the SCCD is supported by 55 members, ranging in size from the Mattoon Street Arts Festival, an annual weekend event, to larger players like Springfield Museums, New England Public Radio, the Community Music School of Springfield, and the Eastern States Exposition.

Representatives of these groups have long attended conferences on the state and national levels to advocate for the role of the arts, but the SCCD can represent the entire range of arts in Greater Springfield, Drewniany explained.

“We have a mission and vision — in short, to make Springfield a more friendly arts culture through civic engagement and arts engagement. That’s very broad, so it leaves us a lot of opportunities to interpret that.”

The district’s website explains its mission this way: “To bring more vitality to the city by highlighting its outstanding cultural offerings and adding new creative opportunities for artists and the greater community. We aim to make arts and culture in Springfield more accessible, while creating connections between artists, cultural landmarks, and visitors.”

One of those connections is the partnership known as Futurecity Massachusetts, a joint initiative of the Massachusetts Cultural Council and the Boston Foundation. Futurecity is working with mayors, urban planners, and arts and business leaders in Springfield, Boston, and Worcester on key real-estate projects in state-designated cultural districts in the three cities, targeting areas ready for development and job growth. The organization has created more than 200 such partnerships across the globe that reposition cultural assets from community amenities to marketplace drivers.

“We took on the Futurecity Massachusetts initiative with the Massachusetts Cultural Council with the idea of talking about a paradigm shift of art from nicety to necessity,” Drewniany said. “That has involved not just arts people but developers, city department heads, and city leaders talking about how, in order to create a 21st-century city, you have to integrate the arts. When you look at competitive cities right now, like London or Boston, developers are one-upping each other, saying, ‘we have art in our gallery.’ ‘Our building is totally made of art, and we have a huge sculpture outside!’”

She noted the example of London, where the developers behind a recent train-station project invested so much money in the building’s aesthetics that people started hanging out there because it was so beautiful. In short time, cafés started popping up, and adjacent vacant buildings were bought up and converted to lofts. “The revitalization of that neighborhood was based around the choice not to build a regular train station,” she said. “They didn’t just slap a mural on a wall and call it a day.” 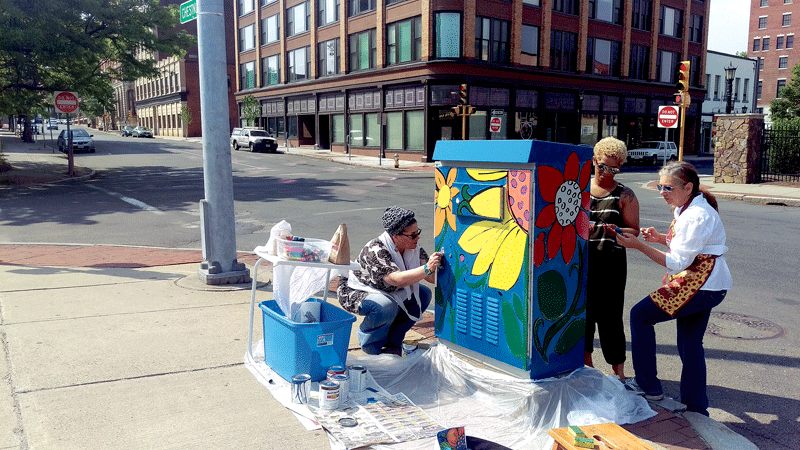 The utility-box painting project has brought splashes of color and whimsy to Springfield’s downtown.

That’s not to say public art of any size isn’t valuable. For example, starting last spring, the SCCD commissioned 26 artists to paint utility boxes around the district’s footprint, transforming the gray, bland boxes with a splash of bright color. The program was intended to both encourage walking downtown and provide a source of income to working artists, and was funded by matching local businesses and organizations to individual artists. The net effect has been increased feelings of positivity downtown, Drewniany said, which hopefully impacts pedestrian traffic.

“We’re so focused on walkability right now, and connecting spaces. If we have more people on the street, it portrays a more positive, friendly environment, and that affects public safety and also helps bring dollars to downtown businesses,” she explained. “And we advertised the times the artists would be painting so people could watch something be created right in front of their eyes, so it served a secondary purpose. We want people to interact with each other, even if it’s for a second. It’s a way to start building a bridge to a more connected community.”

Other efforts to connect the district’s institutions through art include a new video map to accompany the Downtown Springfield Cultural Walking Tour, and the second annual Art Stop event slated for later this month.

The walking tour, first introduced in the summer of 2015, is a tool designed to be used by visitors or residents to learn more about the city’s architectural, historic, and cultural highlights. Printed maps are available at all downtown hotels, visitor’s centers, and cultural institutions.

The video map, available digitally on the SCCD website, springfieldculture.org, brings a new dimension to the walking tour. Viewers gain insight into the history of each location on the map and have the chance to learn an unexpected fact about the venue or building. Each short video (under two minutes, for easy viewing while out and about) is presented by a member of the SCCD on location.

A request for proposals closes on March 8, and the exhibits will be displayed starting the first week of April. All pieces will be available for sale, with 100% of proceeds going directly back to the creators. Like last fall’s inaugural Art Stop, a joint reception will be held between the three locations on April 5, with artist talks, street art, and performances between the locations to encourage walking, and light food and drinks provided by the SCCD and artist hosts.

“Property owners had contacted me about how to activate a space, to get people interested in it, because it felt bland,” Drewniany said of the inspiration behind the program. “We felt we could provide economic impact for artists by creating galleries in these spaces, where the artists can actually sell their work. We also hire musicians and street performers and pay for their performances. That’s definitely a focus of ours — whenever artists are doing work, they’re getting paid like everyone else.”

Too many people, she went on, are too willing to ask artists to perform and produce work as a public service, when other industries don’t get treated that way. “You’d never invite an electrician into your house and say, ‘if you do this, I’ll tell my friends; it’ll be great exposure for you.’”

Other SCCD programs are one-off events intended to create buzz around often-unappreciated cultural genres. For example, in November, the district presented a free concert with three local organists in Old First Church in Court Square, playing the church’s full-size 1958 Aeolian-Skinner organ with its 56 ranks and 3,241 pipes.

The organizers hoped to both show how beautiful and versatile the Old First Church space is — demonstrating the potential in a historic building and encouraging future activity there — and, again, provide income to local artists.

While the district is prioritizing Springfield artists in its applications and trying to build a culture of artistic excellence downtown, Drewniany said, SCCD outreach includes artists from across the whole region, recognizing that Western Mass. is rich in cultural resources and individual artists. “But we want to make our downtown a place where artists want to be showing.”

Member fees fund roughly 75% of the district’s programs and expenses, she told BusinessWest, while most of the remainder is covered by grants, and a few projects, like the utility boxes, are sponsored. She treats her grant-application efforts like all her endeavors — in other words, seeking connections between art and community betterment.

“I’ve applied for public-health grants; I’ve applied for economic-development grants,” she said. “Really, the arts have such a unique way to reach people and solve problems — if you find the right partners and take the right approach. We want to make sure everyone has the opportunity to have their voice heard.”

That’s a vision worth painting — and it sure beats the cold gray of an unadorned metal box.

Understanding the State’s ‘Declaration of Homestead’