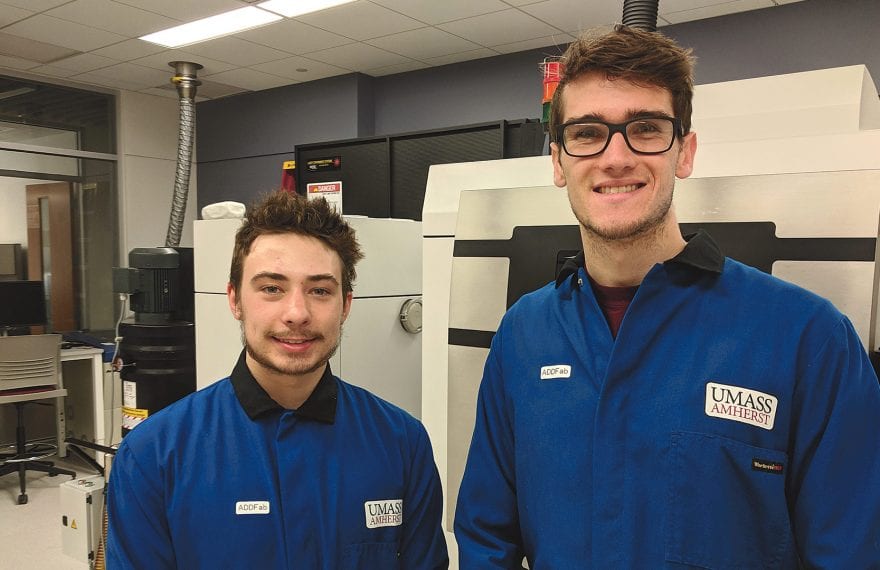 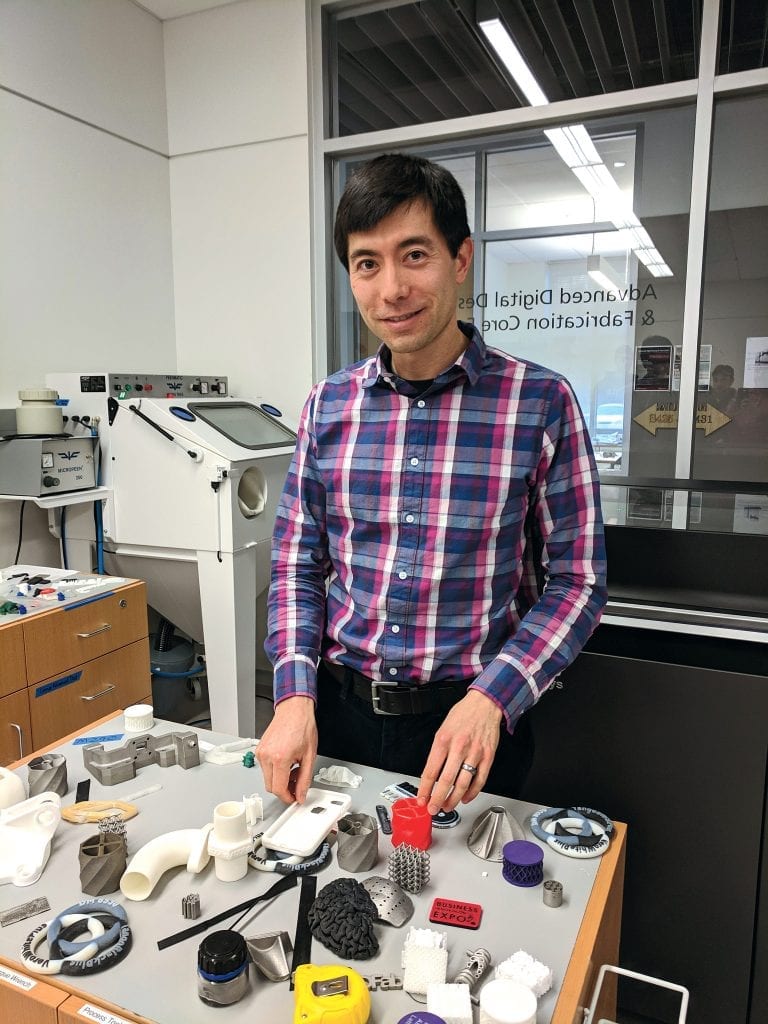 The Advanced Digital Design & Fabrication Lab, or ADDFab for short — one of 31 ‘core facilities’ in the Institute for Applied Life Sciences at UMass Amherst — is creating something significant in the manufacturing world, and not just the products it forms from metal and polymer powders. No, it’s also building connections between young talent and companies that will increasingly need it as 3D printing becomes more mainstream. And it does so with a focus — no, an insistence — on hands-on learning.

It’s hard to learn about 3D printing, Dave Follette said, if you don’t have access to a 3D printer.

ADDFab has five. And it likes to share them. In fact, that’s its mission.

“We have all these high-end machines, and it’s hard to get access to these in the real world,” said Follette, director of ADDFab, which stands for Advanced Digital Design & Fabrication Lab, one of 31 ‘core facilities’ in the Institute for Applied Life Sciences at UMass Amherst. “Who’s going to let you touch their quarter-million-dollar machine and learn the ins and outs of it — how do you set it up? What happens if it fails? What do I do?”

ADDFab, like the other core facilities, seeks to eliminate skills gaps between students and the work world with hands-on opportunities to use some truly cutting-edge and, yes, expensive equipment.

“Here, the student interns aren’t just going on the computer and doing some research. They come to the lab, suit up, play with some parts, take them out of the printer, clean it — they get real experience actually touching the machines.”

“The workshops we do are less sitting in a classroom talking about 3D printing and more, ‘let’s do some 3D printing.’”

“The workshops we do are less sitting in a classroom talking about 3D printing and more, ‘let’s do some 3D printing.’ You actually come in, design a part on the software, print the part, and go home with something you created. You see the process. That’s what’s valuable about being on site. You can go on the Internet and watch YouTube videos, but something about doing it yourself gives you an understanding of how it works and why it works, and what works and what doesn’t. That’s what we’re trying to teach.”

“We’re a research university, so we want our researchers to develop new knowledge, and we hope this will be a medium for that,” he told BusinessWest. “Second, there’s a lot of experiential learning for our students. Third, we have good engagement with our industries, especially small and medium-sized companies in the area.”

The equipment itself is impressive — two metal printers and three polymer printers, each using different raw materials and different technologies to produce an endless array of products. The facility supports UMass itself in several ways, as students and faculty can be trained to use the equipment to conduct their own research on additive manufacturing, while ADDFab also provides printing services and engineering support for faculty in all academic departments.

But it’s the outreach to industry that may be most intriguing element, not just through those aforementioned workshops, which are intended to broaden understanding of how 3D printing will affect the manufacturing industry and to provide hands-on skills, but through a state-funded voucher program that gives businesses with fewer than 50 employees a 50% subsidy to access the core facilities, and 75% to businesses with fewer than 10.

“You can do $100,000 of work for $25,000,” Follette said. “For a new technology, it makes it easy to get your feet wet and test it out. A lot of companies we’re working with haven’t used 3D printing before and are figuring out how it fits into their business.”

Krishnamurty agreed. “We really want to be partnering with local industries in helping us identify the gaps and where we can provide leadership, expertise, and resources to help them achieve their goals.”

What happens when students are well-trained on cutting-edge 3D-printing technology, and when area manufacturers learn more about its potential, is clear, they both noted: Positive workforce development that helps businesses grow while keeping talent in Western Mass.

Jeremy Hall, now a senior at UMass, has been interning at ADDFab, and said the opportunities are positive on a number of levels, including setting students up for interesting careers in a fast-growing, but still largely undertapped, field.

“It’s an up-and-coming field, and a lot of jobs are opening up in it because a lot of companies see the benefit of it,” Hall told BusinessWest. “Look at rapid prototyping — instead of making a mistake and spending five figures on a mold only to discover that part’s not usable, you can do several iterations and save a lot of money doing so.” 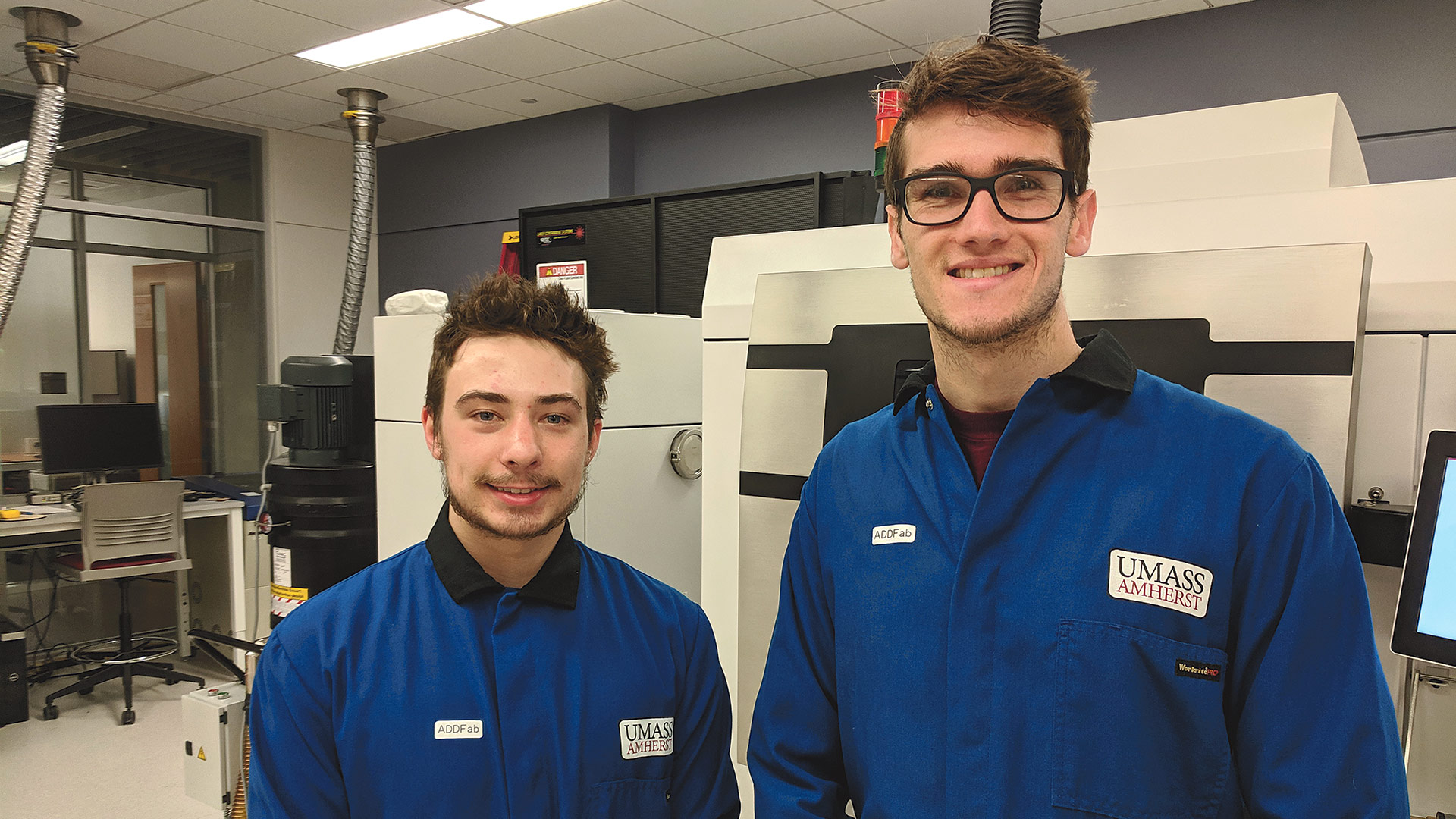 Jack Ford (left) and Jeremy Hall are two of the current student interns at ADDFab.

He thinks he’s putting himself in good position for the workforce by learning the various processes by actually doing them. His initial career interests were in research and design and rapid prototyping, but the more he’s delved into additive manufacturing, the more interested he has become in material properties, and exploring what other raw materials can used to create stronger products. “The application is here; it’s just, how much can you improve it from here?”

“Look at rapid prototyping — instead of making a mistake and spending five figures on a mold only to discover that part’s not usable, you can do several iterations and save a lot of money doing so.”

Another intern, Jack Ford, is a sophomore whose interest in 3D printing began when he used similar — but not nearly as advanced — technology to create a tool in a high-school drafting class.

“It was interesting to see that whole process, and it grew my interest in the manufacturing aspects of it,” he noted. “And look at how 3D printing has grown over the years — it’s crazy to see where it is now. The laser technology is incredible, how it’s so precise and manages to get such a fine level of detail despite seeming like such a strange process. We put the powder down, bam, there’s a layer. It blows my mind.”

There’s an energy-absorbing lattice piece on a table at ADDFab inscribed with the name of its creator, Adam Rice, who recently became one of the facility’s success stories, and an example of how it seeks to connect talent with need.

“In my 10 weeks here, I’ve worked one-on-one with companies, toured facilities, and even given a presentation at FLIR Systems,” Rice explained last year, in an interview snippet used in an ADDFab promotional brochure. “It’s been building my confidence. I’ve had no real engineering experience before this, and this is my first time really applying it and seeing how people do this as a career.”

After graduating in December, he now has a career of his own, at Lytron, a designer and manufacturer of thermal-management and liquid-cooling products based in Woburn.

“They use a metal printer exactly the same as ours and needed someone with additive-manufacturing experience to help them run their printer,” Follette said. “The VP of Engineering contacted me and asked, ‘do you have any students who know additive?’ I said, ‘yes.’ He came by and met the students, and we had a good fit.”

The brochure Rice appears in promotes the UMass Summer Undergraduate Core Internship Program, which allows students from the STEM fields to access hands-on training and experience in the core facilities, including ADDFab, over the summer.

“We’ve been doing learning by trying,” he said. “It’s been really cool to get to do more hands-on engineering.”

And even cooler to spin it into a well-paying job.

Meanwhile, area companies — including, of late, Peerless Precision, Volo Aero, FTL Labs, Cofab Design, and MultiSensor Scientific — continue to take advantage of ADDFab’s resources, often through the voucher program, either to make 3D products or learn more about how to incorporate the technology. Responding to a commonly raised concern, Krishnamurty stressed that all intellectual property stays with the companies. 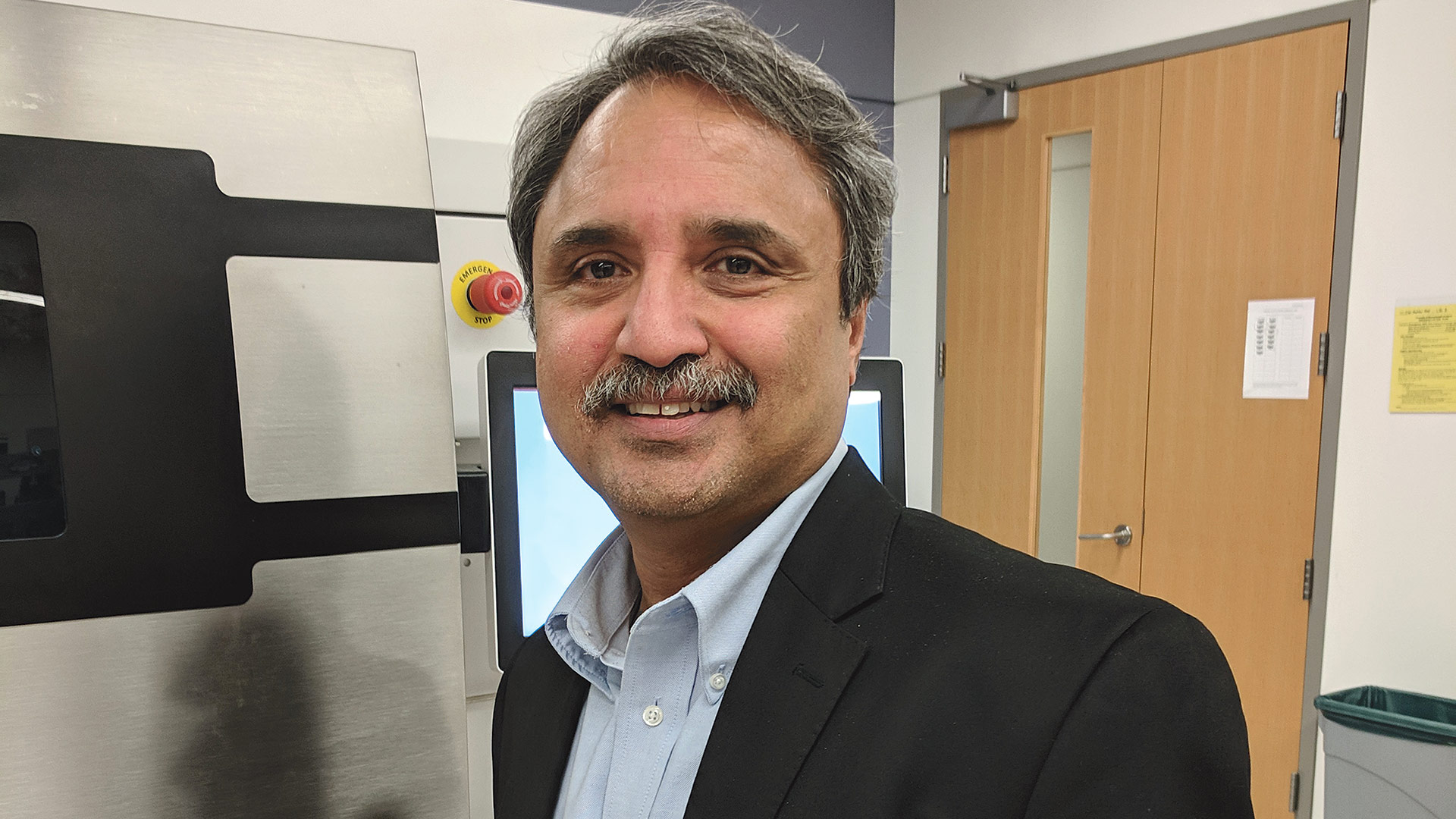 “A lot of times, people see UMass and think, ‘how do I work with them? They’re big, and I’m not,’ Follette said. “But the message we want to put out is that we’re doing 3D printing, and we’re here to help industries. There are many ways to get involved, whether you just have an idea on a napkin or you have computer files and want to print them on our advanced printer.”

Indeed, he noted, ADDFab’s large-scale 3D printers are performing industrial-grade production of “real parts you can use for real things. A lot of engineering companies we’re working with are doing prototyping of parts, design iterations — they want to print something and feel it, then make another change and another change, and it’s great they can turn this around fast and get a part that’s usable also at a great price.”

“A lot of times, people see UMass and think, ‘how do I work with them? They’re big, and I’m not. But the message we want to put out is that we’re doing 3D printing, and we’re here to help industries.”

And if the facility can perform such services while training the next generation of engineers and boosting workforce development for the region’s manufacturing sector, Krishnamurty said, well, that’s a clear win-win-win.

“These are truly one-of-a-kind facilities,” he said, speaking not just of ADDFab, but all the core facilities at UMass Amherst. “I think the future is endless.”