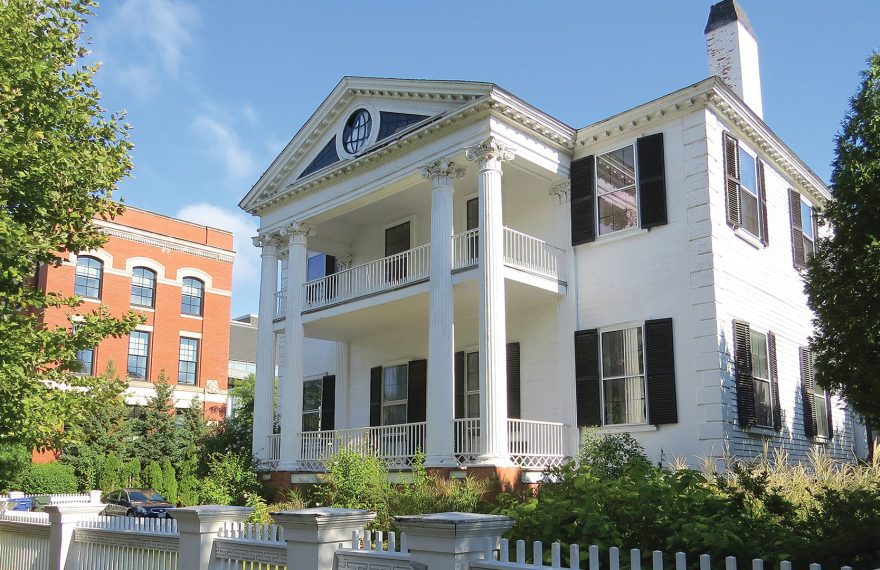 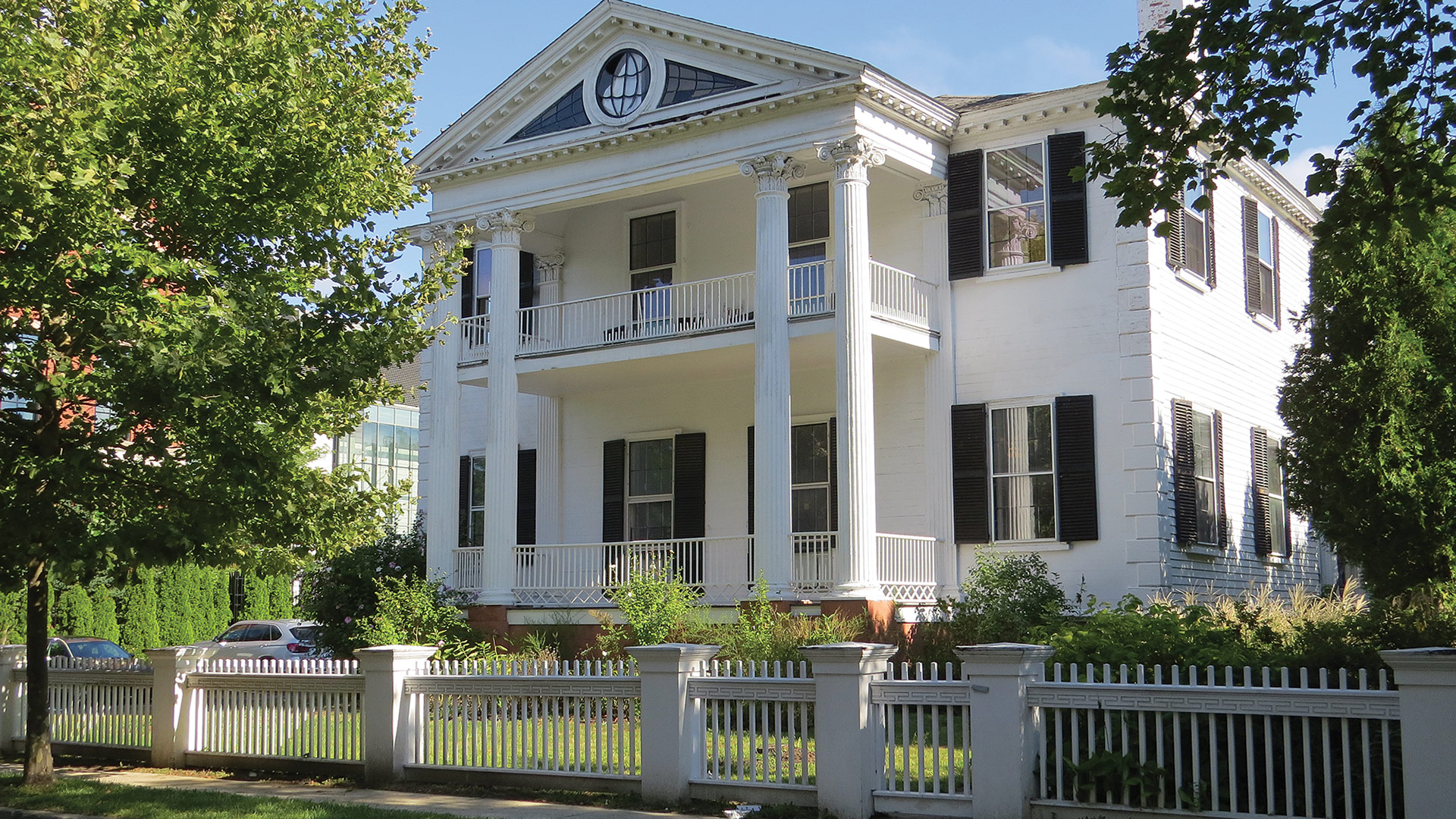 Amy Royal first started taking notice of the Alexander House in Springfield when she was a high-school student at nearby MacDuffie, and soon became taken in by its beauty, 200 years of history, and place in the city. Later, she started viewing the property in a different light — as a potential home for her growing law firm. Earlier this year, that dream came true.

Amy Royal says she’s long had an affection for the historic Alexander House in Springfield.

She first took hard notice of it when she was in high school at MacDuffie, located a mile or so away from the home’s former location on State Street. Back then, she recalled, it was a beautiful home with a lot of history, and she’s always had a fondness for structures that fit that description and now lives in a home that is nearly 250 years old.

Later, after beginning her career as an employment-law attorney and eventually starting her own firm, she started looking at the 6,000-square-foot home, built in 1811, in a much different light — as a place to locate her business. 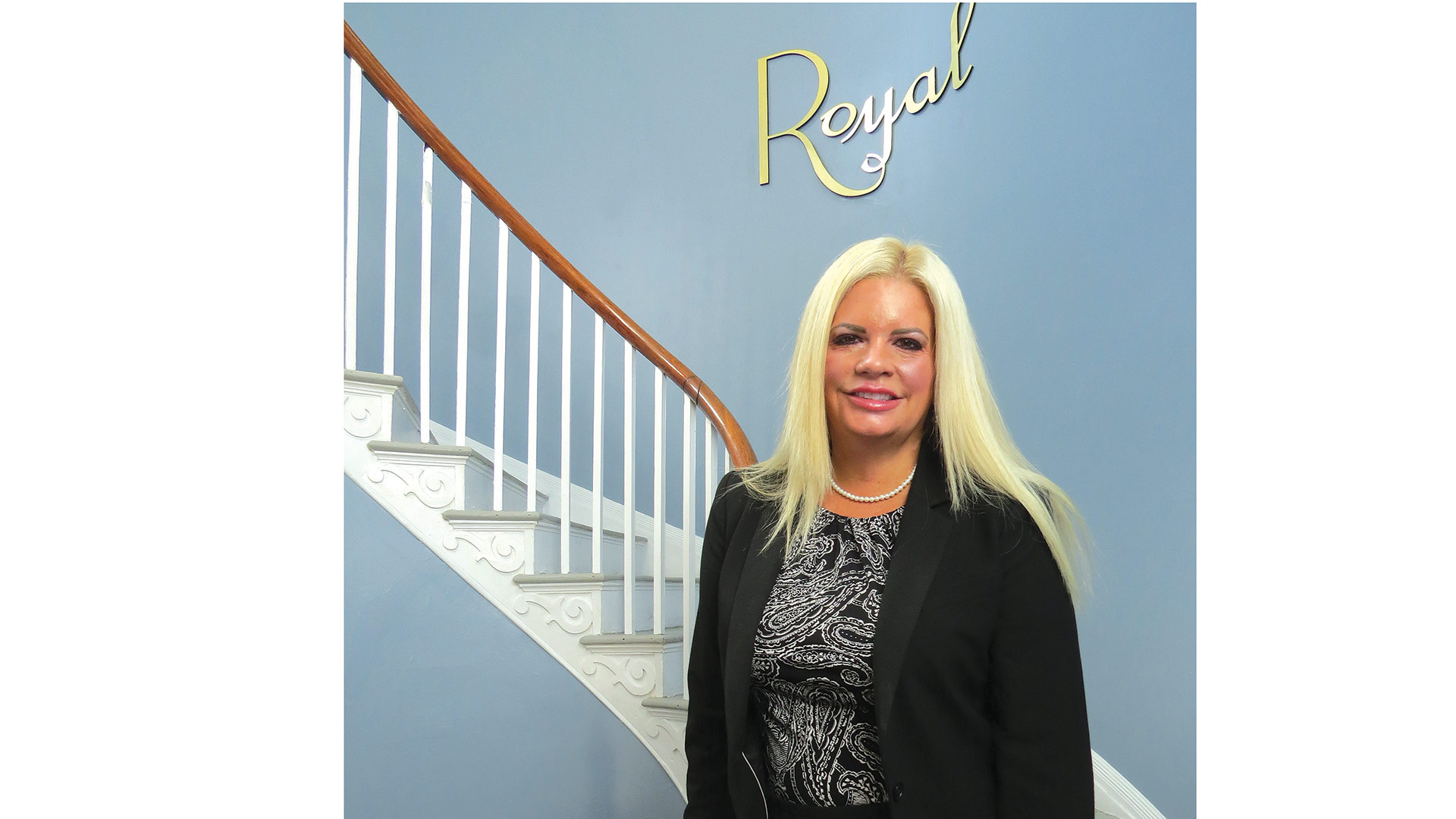 Amy Royal, seen at the grand staircase of the historic Alexander House, has long had her eye on the landmark as a home for her business.

“I’ve always really, really loved the building,” she told BusinessWest. “Everything about it — the design, its place in the city’s history … it’s magnificent.”

These thoughts only intensified after the Alexander House was moved from its long-time location around the corner to Eliot Street to make way for the new federal courthouse in Springfield that eventually opened its doors in late 2008. Royal had business in the courthouse, and eventually found parking a few hundred yards down Eliot Street, necessitating a walk past the Alexander House.

Today, Royal is living the dream, literally — the one about moving her growing business, the Royal Law Firm, into the Alexander House’s 14 rooms, and the basement as well.

She’s needed a new home almost from the day she moved into her now-former home, leased space in the large office building at 819 Worcester St. in Indian Orchard. She looked at both options, leasing and owning, and decided that the latter made far more sense.

But owning the Alexander House? Like she said, this was a long-held dream come true.

“I’ve always really, really loved the building. Everything about it — the design, its place in the city’s history … it’s magnificent.”

For this issue and its focus on commercial real estate, BusinessWest talked with Royal about how her affection for this historic home became a quest — and eventually a dream realized. We also got a tour, one that quickly revealed why this landmark has been a career-long pursuit for Royal.

Royal said she’s looking forward to being able to walk to the federal courthouse when she has business there, especially when she considers the large amounts of paperwork she traditionally brings with her when she’s in court.

Which … isn’t very often at all, she told BusinessWest. 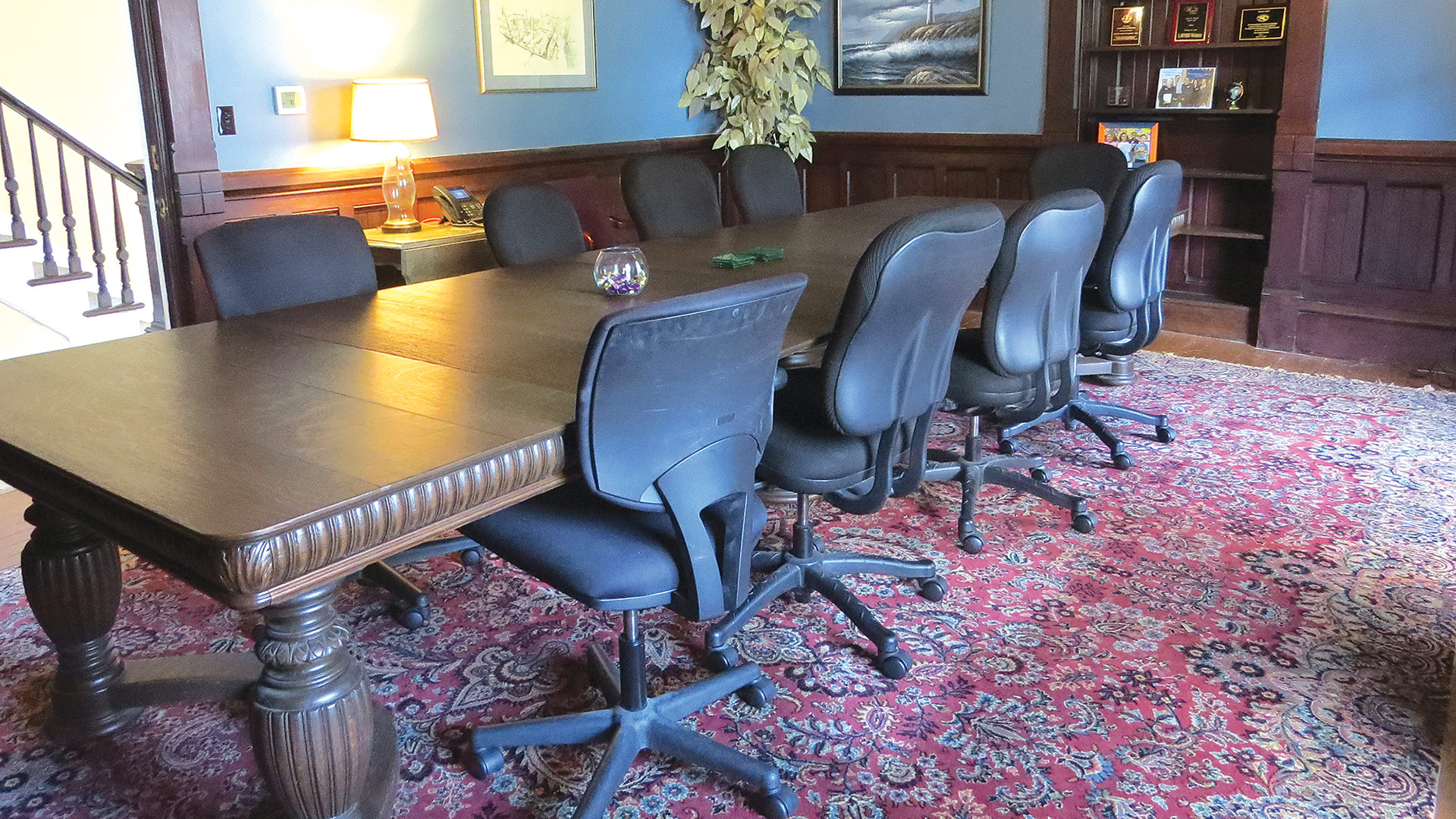 One of the 14 rooms at the Alexander House has become home to the Royal Law Firm’s main conference room.

“We’re civil litigators … if I don’t see the inside of a courthouse in a year, that’s not unusual,” she said, adding that location, location, location, the driving force in many decisions concerning real estate, was only a minor factor in this case. It was the property that drove this decision.

Since launching her own law firm, Royal has had lengthy drives to that federal courthouse. After starting in a small office on Center Street in Northampton, she relocated to larger quarters on Pleasant Street, and remained there until moving her headquarters office — she has satellite locations in several other cities — to a suite of offices in the building on Worcester Street in March 2020, just after the pandemic found its way to Western Mass.

She wasn’t expecting to be looking for a new home so quickly, but rapid growth — traditionally put in the ‘good problem to have’ category, although it does present challenges — made a change necessary.

“I knew we were outgrowing our space where we were — I just didn’t expect to outgrow it as quickly as we did,” she explained. “I just casually started looking for something.”

In a nice twist of fate, this casual search coincided with the Alexander House being put on the market in June 2021, signaling the start of a new chapter for a home that had seen plenty of history and had become historic in its own right.

Designed by the prominent architect Asher Benjamin and built by noted builder Simon Sanborn, the Greek revival home draws its name from its fourth owner, Henry Alexander Jr., a mayor of Springfield who acquired the property in 1958. But it has another, less-known known name, the Miss Amy House, derived from Alexander’s daughter, Amy, who lived in the house for many years and was quite active in the community on a number of philanthropic fronts. 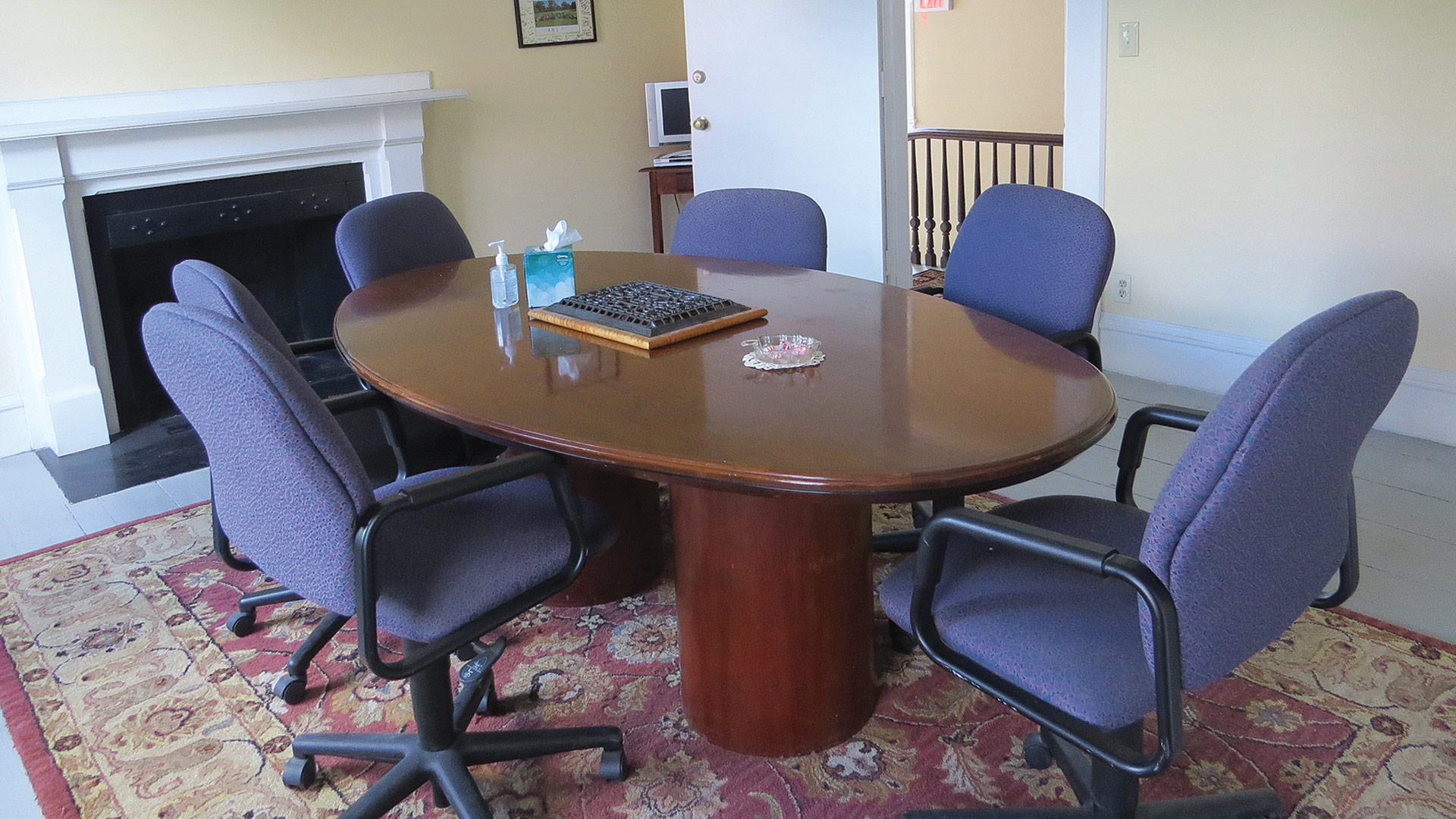 Rooms at the Alexander House have been converted into a small conference room and lawyers’ offices.

The home has had a relatively small number of owners over the years, said Royal, who has come to know the history of the property — she learned in high school that one of the dorms there was designed to reflect the Alexander House — and is always seeking to learn more about it.

When a search was commenced for a home for a new federal courthouse at the start of this century, those involved, and especially U.S. Rep. Richard Neal, became determined to find a location on State Street, long the cultural and historic thoroughfare in the city and home to several schools, churches, and government buildings.

The property on which the Alexander House stood became the preferred location, and to make it happen, a short but complicated — because of the size, age, and condition of the home — move had to undertaken, one that was well-chronicled and captured the attention of the city.

After the move, the home became to several small businesses, including an architect and an attorney, but much of it was unoccupied. As noted, it came on the market in the summer of 2021, and soon after, Royal commenced her pursuit of the home.

Because of that aforementioned move, the home now has a new foundation, one of many features that caught her eye when she toured the property after it went on the market.

“The foundation they put in is incredible — there must be 10-foot ceilings there,” she told BusinessWest, adding that her firm will use that space as a filing center but may eventually build it out.

“I’ve always really, really loved the building. Everything about it — the design, its place in the city’s history … it’s magnificent.”

But there was so much more, obviously.

“I thought it was magnificent — the spiral staircase alone just stood out to me,” she recalled. “But every facet of the architecture — the crown molding, the ornate craftsmanship in all of the trim work, the grand ceilings, the chandeliers, the fireplaces … to me, it just spoke of having a law-firm practice inside; it’s a magnificent place to have a law firm.”

Royal said she heard anecdotally that there were a number of other suitors for the Alexander House when it came on the market. She believes she prevailed because her passion for the property quickly became evident, and she convinced then-owner Thomas Schoeper that she would be a good custodian of the landmark.

“He really wanted someone who would be a good steward of the property and really cared about its history and character and the integrity of the building itself,” she noted. “I spent a lot of time talking with him about all that.”

Royal closed in February of this year and has spent the past several months giving the property that ‘love’ she said it needed. Improvements have included a new HVAC system, an alarm system, remodeling the kitchen, installing IT wiring throughout, and painting many of the rooms, she said, noting that the property is subject to historic covenants and monitored by Historic New England, and also subject to an annual inspection and historic preservation.

The firm moved in a few weeks ago and is still settling in, Royal said, adding that, with a property of this vintage, there will always be work to do.

“That’s going to be a never-ending project,” she said. “That’s the way it is with historic buildings.”

Meanwhile, her new mailing address is everything she hoped it could be and would be when she first started thinking about it as a future home all those years ago.

“Everyone here just loves it — it’s a great place to work,” she said.

Noting the continued growth of her law firm, Royal was asked if the Alexander House provides the requisite space for additional team members.

She said it did, but in a more emphatic voice, she noted that she would not be moving again — soon or probably ever.

“We may grow in other regions — that’s the plan — but this will be our headquarters building,” she said. “This is home.”