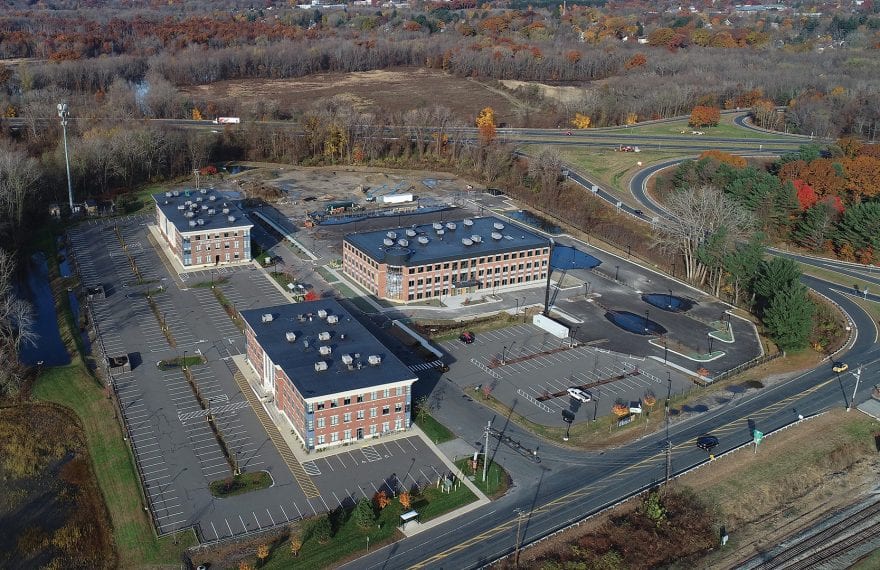 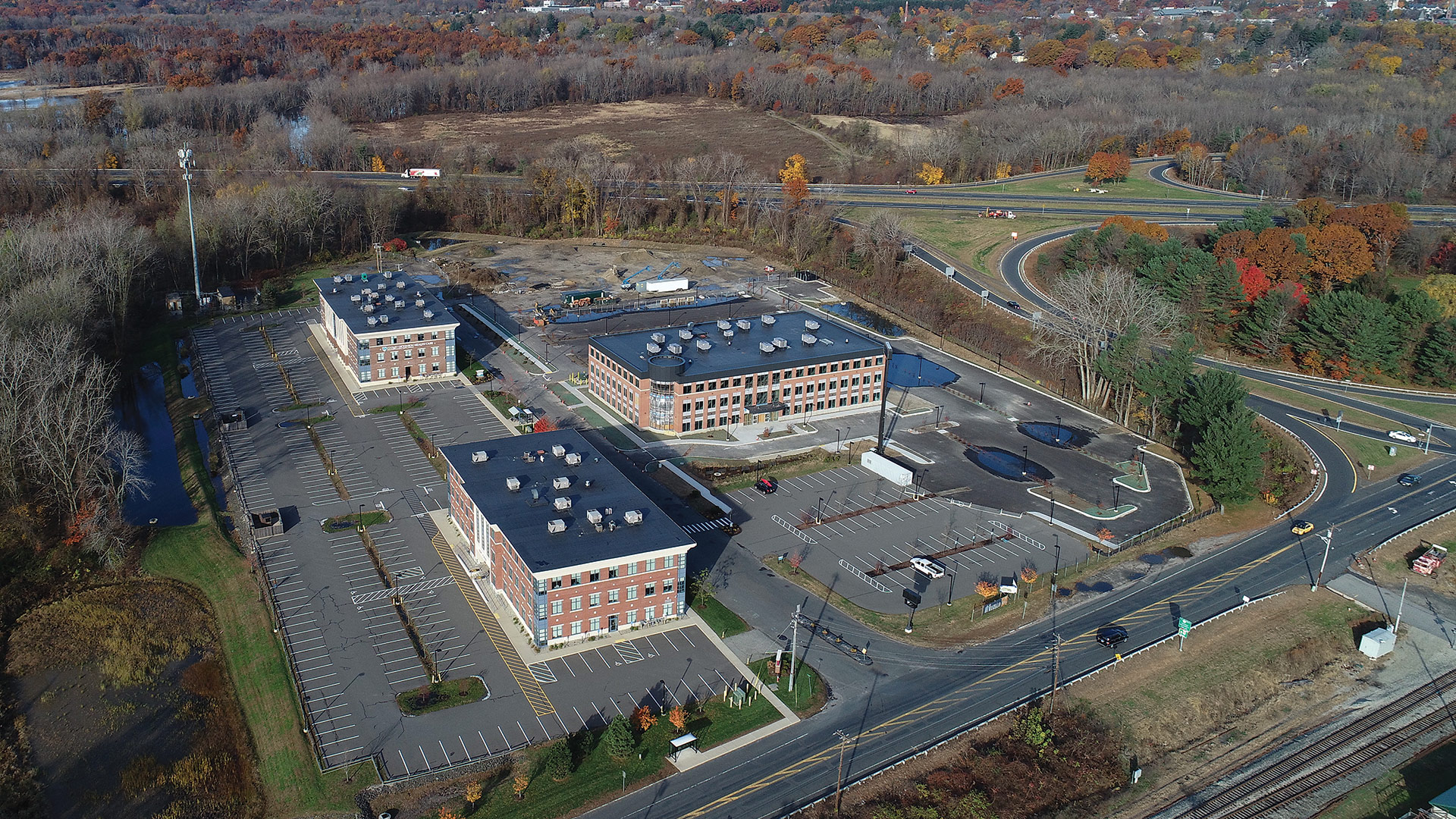 An aerial drone shot of the Northampton/I-91 Professional Center on Atwood Drive.

Ken Vincunas says he started getting into drone photography years ago — well before most practitioners.

There was a lengthy learning curve, and in some ways it’s still ongoing, he acknowledged, but overall it’s been a fun, intriguing experience as the technology has improved and its capabilities have grown. Meanwhile, it’s become a very practical — and much-needed — work tool for Vincunas, president of Development Associates, the Agawam-based commercial real-estate management firm and developer.

Indeed, he uses drone shots to help market the myriad properties in the company’s portfolio from Greenfield to East Granby, Conn.; shots from above often provide a unique perspective.

Shots like the one on this page, which Vincunas took last fall — probably in the early morning, by the looks of the parking lot and the lack of traffic on nearby I-91. Perhaps better than any thousand words could — even these — the picture tells how the development on Atwood Drive in Northampton, known officially as the Northampton/I-91 Professional Center, has changed the landscape in that area, once home to the Clarion Inn and Conference Center (Vincunas told BusinessWest he has some powerful drone shots capturing the demolition of that facility).

Today, the site has become home to a wide range of businesses and institutions, including the Massachusetts Trial Court, now a major tenant in the third building to be developed on the property, known as 15 Atwood, the large one in the center of the picture.

But Cooley Dickinson Hospital (CDH) is the dominant tenant on the property, with facilities in all three buildings and a presence summed up with the collective ‘Atwood Health Center.’

The hospital, a Massachusetts General Hospital affiliate, has its name on 22 Atwood (Cooley Dickinson Health Care), which houses a number of facilities, from Atwood Internal Medicine to Hampshire Cardiovascular Associates; from integrated behavioral-health services to women’s health. Meanwhile, at 8 Atwood, the first building developed, CDH has located its occupational-therapy, physical-therapy, and speech-language facilities, and in 15 Atwood, opened last spring, CDH has placed general surgical care and infectious-diseases facilities and Oxbow Primary Care.

Thus, the facility has become a true healthcare destination, similar to the Brightwood section of Springfield’s North End, although, as Vincunas noted, it is home to a wide variety of tenants, including an engineering firm and an accounting firm slated to move into 15 Atwood later this year (buildout on the latter is much further along than the former).

Which means the parking lot generally doesn’t look anything like it does here. And it’s likely to become even more full in the coming months as Vincunas looks to fill the remaining spaces in 15 Atwood, roughly 8,000 square feet in total.

“We’re seeing a good amount of interest in this space,” he said while sitting at a table in one section if it. “We had one caller interested in the whole thing and several others interested in pieces of it.”

But he’s already looking beyond those spaces — both literally and figuratively — to the undeveloped property at the back of this parcel, adjacent to the highway. There is room for additional development there, he said, and already a search is underway for the anchor tenant or tenants needed to greenlight new construction.

“We have site-plan approval for another building, which is a significant milestone,” he said, adding that the permit will allow something between 40,000 and 50,000 square feet, somewhat smaller than the 66,000-square-foot 15 Atwood. “We’ll need someone there to be the anchor, as it was with these other buildings.”

For this issue, BusinessWest takes an in-depth look at the Atwood Drive complex and how it remains an important work in progress.

A Vision Comes into Focus

Despite how it might look to some, Vincunas stressed repeatedly that this venture was certainly not an overnight success.

Indeed, it’s been more than a decade in the making, he said, and the story really begins when the Clarion property, located on the north side of Atwood Drive, was acquired at auction by the O’Leary and Shumway families in the early ’90s. Other sites on both sides of the street were acquired over the ensuing years, and eventually a vision developed for a professional office complex, said Vincunas, one that would be built in stages as need — and anchor tenants — emerged.

“We’re seeing a good amount of interest in this space. We had one caller interested in the whole thing and several others interested in pieces of it.”

Redevelopment of the south side of the property, undertaken by a partnership of the O’Leary and Shumway families, with Development Associates as leasing agent and construction property manager, began with 8 Atwood, with construction commencing in 2011. It is now home to Clinical & Support Options, several CDH facilities, as noted, and New England Dermatology. The building known as 22 Atwood was built in 2012. It is now home to 17 different CDH services, including the diabetes center, fertility services, geriatrics, podiatry, radiology and imaging, rheumatology, and spine medicine.

Construction on 15 Atwood — led by the O’Leary family as managing partner, again in partnership with Development Associates — began in 2017, with the trial court as the anchor tenant; the facility had been located in cramped quarters in downtown Northampton and needed an upgrade. 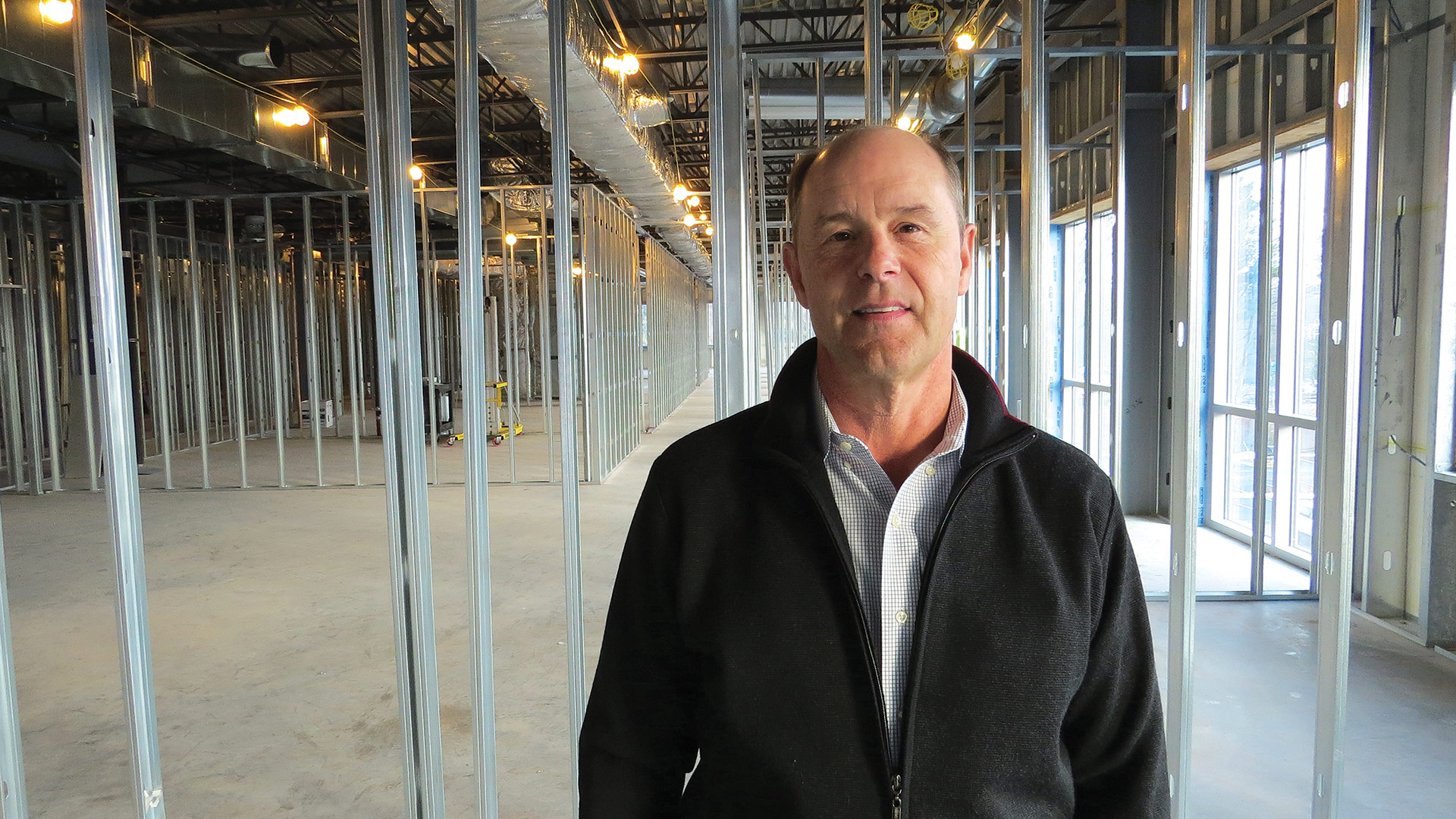 Ken Vincunas stands in the space being built out for the construction firm BluRoc in 15 Atwood, the latest addition to the complex just off I-91 in Northampton.

The court, now occupying roughly 22,000 square feet, moved in last February, and since then, a number of additional tenants have signed on, including Cooley Dickinson, which moved in last fall; the state Department of Developmental Services; Assurance Behavioral Health; Staffier Associates, a mental-health clinic; OnaWay, LLC, an accounting firm relocating from Holyoke; and BluRoc, a construction firm now located in Hadley.

This diverse mix of tenants was drawn to the Atwood Drive complex by a number of factors, but especially accessibility (the site is just off exit 19 of the highway), parking, the large footprints available, and the ability to shape these spaces to fit specific needs.

“One of the big draws is the parking — it’s very hard to find a very large space with this kind of parking in Northampton,” Vincunas explained. “And it’s very accessible, which makes it attractive to a wide range of businesses and facilities like the courthouse.”

And also BluRoc, which will soon be occupying more than 6,000 square feet of space on the third floor of 15 Atwood.

“They have three offices in three different buildings in one little area, and they needed a consolidated office; they’re going to have 30 people here,” he said, adding that buildout of the space should be completed by late spring.

With the third and first floors fully leased, there are now just those two spaces remaining on the second floor, he said, adding, again, that there has been a good amount of interest expressed in those footprints.

Looking ahead to the last remaining parcel and development of that space, Vincunas said there is no definitive timeline on construction, but he believes there is solid demand.

The accounting firm OnaWay has its own aerial shot of 15 Atwood on its website, accompanied by the words “our new home in 2020 is underway, and we’re stoked to live and work where we call home.”

There’s a growing list of companies saying similar things about this location, which has been completely transformed over the past decade — from unused property and a tired hotel and conference center into a state-of-the-art professional complex and healthcare destination.

As Vincinas said, it wasn’t an overnight success, certainly, but it has developed — yes, that’s a photography term — into one of the better development stories in the region.

As that drone shot clearly demonstrates.