Center for EcoTechnology to Present Free Webinar on Small-business Weatherization

FLORENCE — The Center for EcoTechnology will host a free webinar on “Small Business Weatherization Services, Energy Efficiency, and Incentives” on Thursday, June 17 from 1 to 2 p.m.

This webinar will discuss the benefits of weatherization for small businesses. Attendees will learn how to improve business performance, spend less on energy, increase comfort, and shrink one’s carbon footprint. Click here to register. 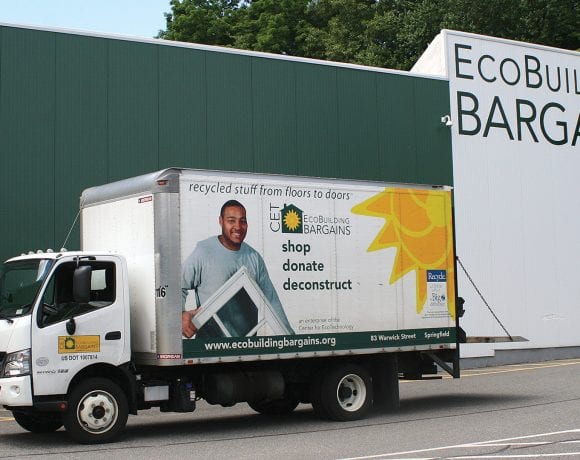 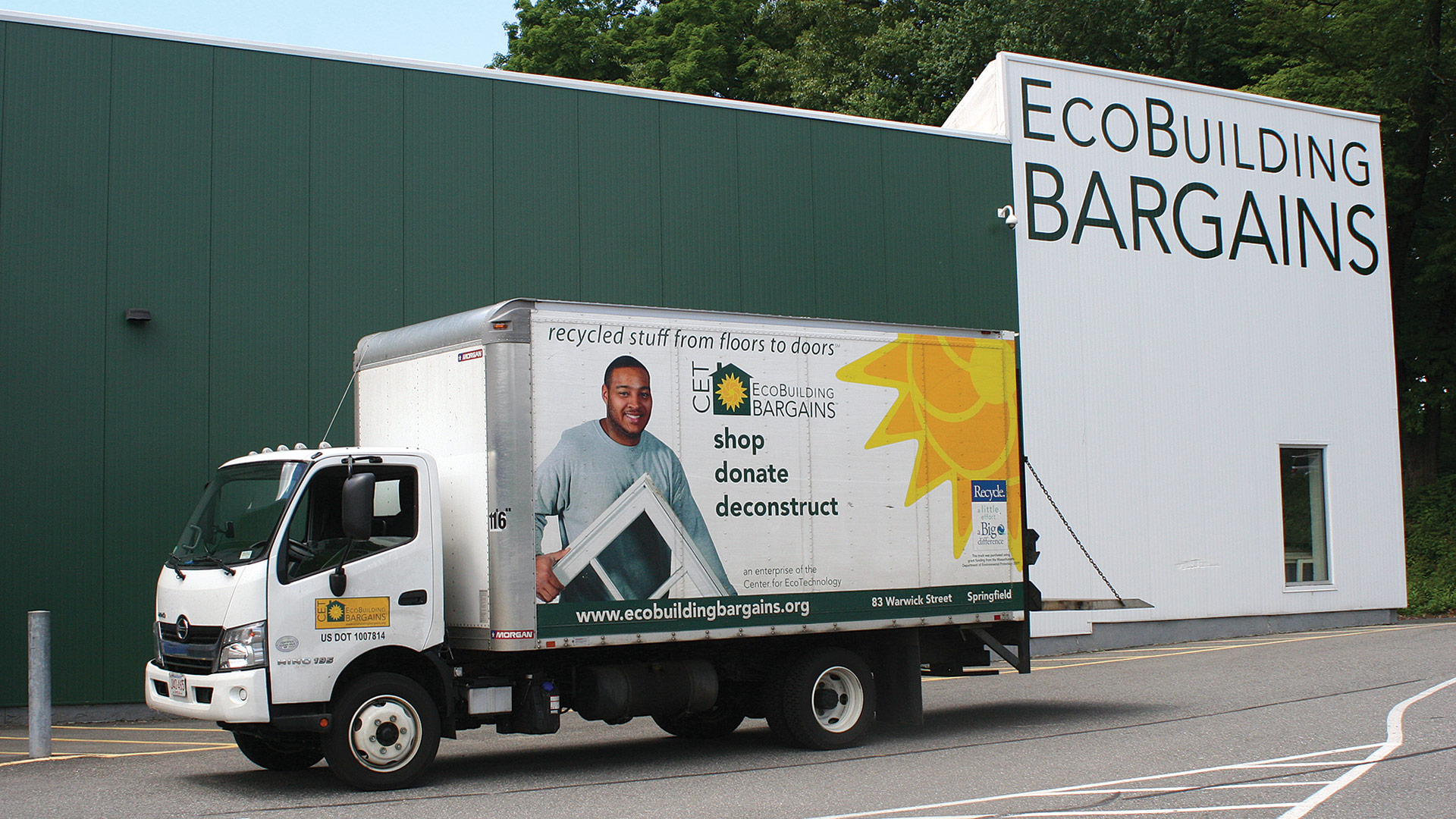 EcoBuilding Bargains, celebrating 20 years this year, has been a trendsetter in repurposing reclaimed and surplus building materials.

John Majercak likes to say the Center for EcoTechnology (CET) has been successful for 45 years because it’s willing to try out approaches to saving energy that in time become a normal way of doing business.

“We helped invent the energy audit in the 1970s, and now it’s a routine thing that lots of people have done, and it’s having a huge impact,” said Majercak, president of CET.

In 2021, the organization marks several noteworthy milestones. In addition to CET’s 45th birthday, Majercak celebrates 30 years with the organization, serving as president since 2010. In his time there, he has seen a growing mainstream awareness of the connection between the community, the economy, and the environment.

“It used to be that environmentalism was thought of as a fringe thing or a nice thing to have,” Majercak said. ”But the work we do in saving energy and reducing waste helps people live better lives, as well as addressing the urgent issue of climate change.”

CET also runs EcoBuilding Bargains, the largest reclaimed and surplus building-materials store in New England. Launched in 2001, the reuse store celebrates its 20th anniversary this year. When it opened, the store was one of only a few of its kind that existed. Today, thousands of stores sell reclaimed building materials.

From the beginning, people liked the idea of saving money and helping the environment by giving a second life to used cabinets, lighting, plumbing fixtures, and hundreds of other items. Through the years, awareness increased as EcoBuilding Bargains was featured on several home-improvement TV shows, most notably This Old House.

Located in Springfield, EcoBuilding Bargains sells products in all 50 states and several other countries thanks to the internet. Once reusing materials became fashionable, Majercak said, interest in the store exploded.

“When reusing materials became stylish, it allowed people to bring their own character to a piece,” he noted. “On top of personal creativity, it’s an inexpensive purchase that helps the environment, so it’s a home run.”

Majercak pointed out that the current boom in home improvement — fueled by the pandemic and people being in their homes much more than would be considered normal — has created both a supply and a demand for items at EcoBuilding Bargains.

“It used to be that environmentalism was thought of as a fringe thing or a nice thing to have. But the work we do in saving energy and reducing waste helps people live better lives, as well as addressing the urgent issue of climate change.”

“All the home improvement that’s going on means more materials we can capture for donation and reuse,” he noted. “Then, when people renovate with these materials, they can save lots of money, help the planet, and make their homes look super-cool.”

Likewise, the pandemic hasn’t slowed business for the store. EcoBuilding Bargains is open for people who want to shop in-person and also offers virtual appointments so people can shop over the phone. With video calls, Majercak said, staff can show items, and customers can ask more specific questions about a piece.

Other parts of CET’s business have also adopted a combination of in-person and virtual interaction. Energy audits, for example, have a whole new feel that creates opportunities and challenges.

“We have people who are happy to get on a Zoom call and show us around their home or business for an energy audit,” Majercak said. “On the other hand, those who wanted an in-person visit are on a waiting list until after the pandemic is over.

“After the pandemic, I’m sure we’ll be doing plenty of things in person again, but we will continue to go virtual for those who prefer that approach,” he went on. “In that way, it opens more opportunity for mission impact.”

With a stated mission to “research, develop, demonstrate, and promote those technologies that have the least disruptive impact on the natural ecology of the earth,” one of CET’s goals involves reducing carbon emissions equal to removing 100,000 cars off the road for a year by 2022.

There are many ways people can reduce their carbon footprint, all of which use less energy without compromising comfort. Converting to LED lights and adding insulation are two easy ones. 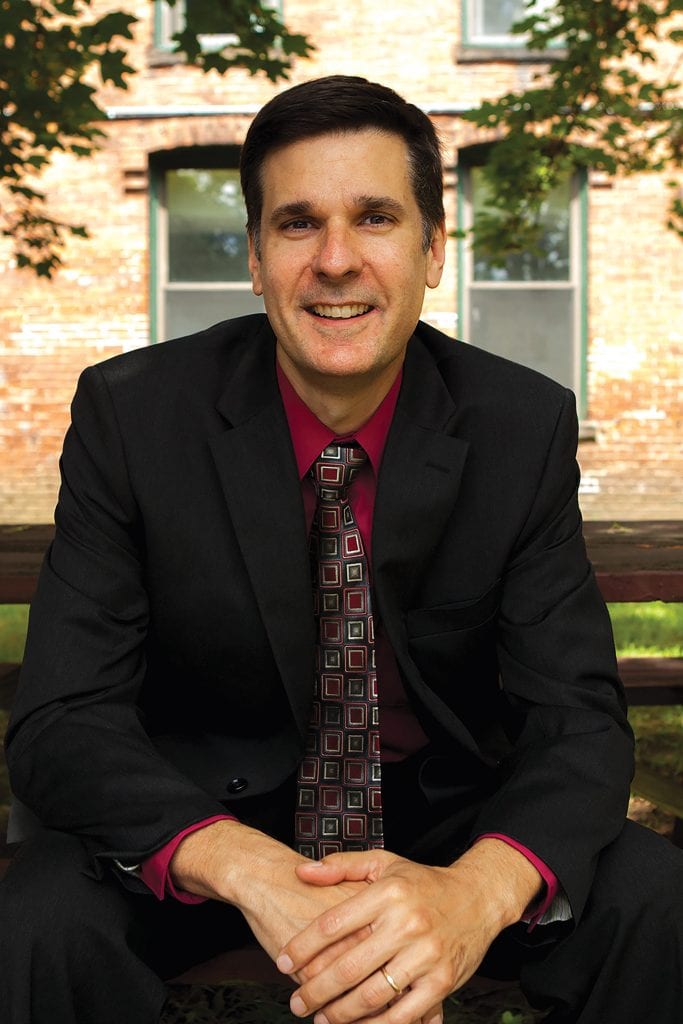 John Majercak says a central focus for CET over the years has been pursuing technologies with the least disruptive impact on the environment.

“Weatherization is a good example because installing air-sealing insulation in the home increases the comfort dramatically and uses less energy — and, therefore, less carbon,” Majercak said. “We’ve been doing these programs for years, and they save lots of energy and carbon.”

He cited a recent effort in which CET has partnered with colleges in the Community Climate Fund, which provides support for local carbon-reduction projects. By investing in the fund, colleges support the community, as well as creating learning opportunities for students who conduct research and gather data. Projects range from recovering used building materials or helping a homeowner get a heat pump to providing loans to farmers so they can make energy improvements to their operations.

“The Community Climate Fund is a great way to extend the impact of our programs and get even more done,” he told BusinessWest.

Massachusetts recently unveiled a plan to achieve a 45% reduction in carbon emissions by 2030 and to be carbon-neutral by 2050. Majercak has reached out to utilities to encourage them to align their energy-efficiency programs with these climate goals. CET is currently working with a municipal utility company to test an energy-efficiency program that measures carbon reduction, as opposed to just energy savings. It’s one of the first programs of its kind in the country.

“Anytime you save energy, it reduces carbon, but the kind of energy you save and the kind of energy you use also affects carbon,” he said, noting that the car you drive and the lawnmower you use can also make a difference in changing your carbon footprint. “For the foreseeable future, we will be studying energy issues by looking through the lens of carbon reduction.”

CET is also working with utilities on promoting the use of air-source heat pumps for houses. While they have existed for years, Majercak said heat pumps were primarily used in warmer climates. With recent technology improvements, they can now withstand the sustained cold temperatures of a New England winter. Unlike traditional heating systems, heat pumps take heat from outside air (yes, even frigid cold air has heat in it) and move it into the home.

For cooling, the heat pump does the reverse and removes heat from the house to the outside. Instead of using oil, natural gas, or propane, heat pumps run on electricity. As long as renewable energy becomes a larger part of the grid, he said, electric power is the logical choice.

“This is good from a carbon perspective because, as the power grid gets greener and as more people use heat pumps and drive electric cars, the more carbon reduction we’ll get,” Majercak noted, adding that heat pumps are just catching on, and we will see a lot more of them in the coming years.

And they represent only the latest cutting-edge technology that CET has helped establish in its 45 years.

“I’m very proud of the people at CET because they’ve always been real innovators and have helped change the way things work,” he said. As one example in the realm of waste and recycling, CET helped to establish the Springfield Materials Recycling Facility (MRF), which serves 65 communities in Western Mass. Back when recycling was a new approach, CET worked with towns to help them prepare their recycling programs for the Springfield MRF.

In the 45 years since CET has been in operation, energy conservation has hit peaks and valleys in politics and policies on the national level. Majercak noted that the state and regional levels have been more consistent, and asserted that CET has never been, nor ever will be, a political organization.

“We’re a solutions organization; we work with everyone,” he noted. ”As long as we keep that focus, we will be successful.”

Elaborating, he said the key is to meet people where they are and help them either solve a problem or achieve a goal.

“If you’re a small business, your goal may be to save money and have your business perform better. Energy efficiency, as well as waste and recycling management, can help you reach that goal,” he said. “A homeowner might want to be more comfortable or lower their electric and fuel bills. We can do that for you, and it doesn’t matter what you think about climate change.”

“All the home improvement that’s going on means more materials we can capture for donation and reuse. Then, when people renovate with these materials, they can save lots of money, help the planet, and make their homes look super-cool.”

For all the energy-saving opportunities out there, Majercak understands that spreading the word about what CET does and how it can help is essential. “Even when people are aware and want to do something to save money or save the environment, we still do a lot of hand holding to get it done.”

Spreading the word through workshops and social media definitely helps to engage people. Majercak pointed to one effort in which EcoBuilding Bargains runs a “Reuse Rockstar” contest on social media that encourages people to post the creative ways they have used items from the store.

“It’s inspirational to see how people apply their creativity and elbow grease to make beautiful houses and rooms for a fraction of what they would normally cost,” he said.

Because climate change is a global problem, it’s easy for people to feel overwhelmed and doubtful they can make a difference, said Majercak, who assures them that they do not have to solve climate change all by themselves, and shows them different ways they can have an impact.

“When someone switches out their lightbulbs, buys an electric vehicle, or installs used cabinets, these are not overwhelming actions,” he told BusinessWest. But when CET helps tens of thousands of people do these little things, they start to add up.

“Consider that people across the state, the country, and the world are doing similar things, and it’s easier to see how each effort contributes to making a real difference. We are firm believers in little things with big payback.”

In addition to turning new approaches into normal processes, Majercak looks forward to the growth potential for EcoBuilding Bargains as it sells more products to people through eBay and, soon, through its own e-commerce site.

When he considers CET’s 45-year history, he appreciates how far the organization has come, but he’s even more excited about the near future.

As much as we’ve done, I think we will really accelerate and see much more progress in the next 10 to 15 years,” he said. “It’s an exciting time to be doing the work we do.”