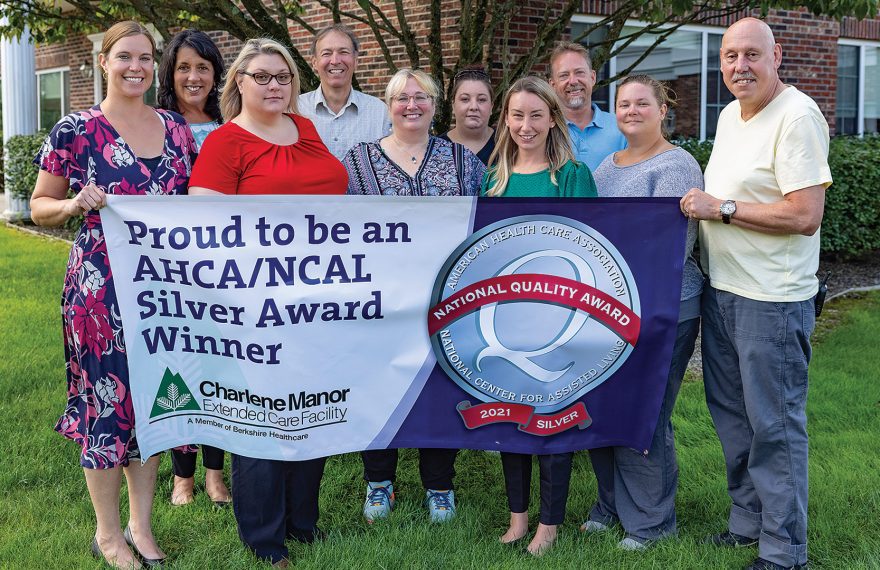 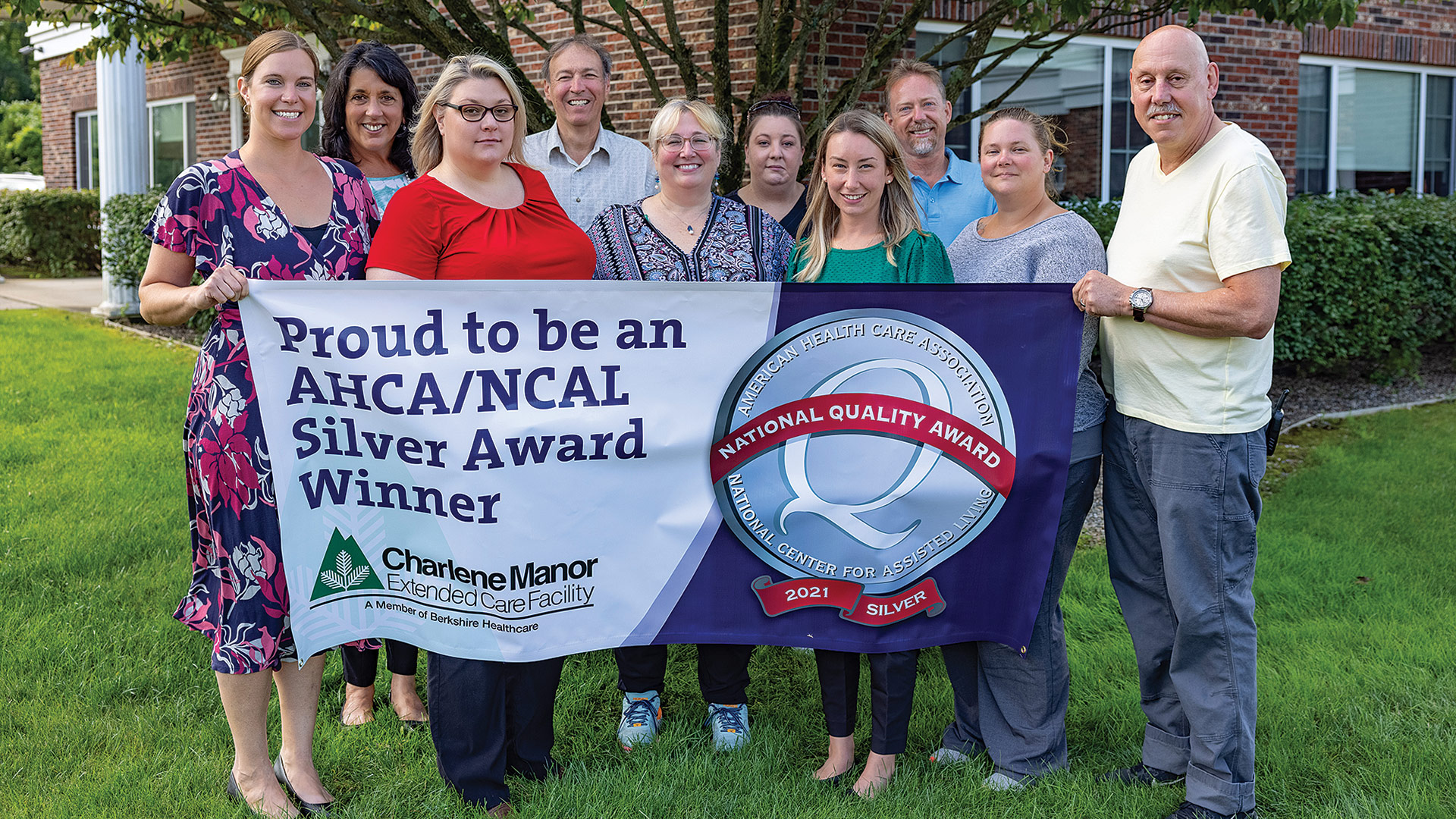 The team at Charlene Manor displays the banner announcing that the facility has been honored with the Silver Achievement in Quality Award.

Sometimes accolades and honorifics cannot compare to the rewarding aspects of certain fields of work.

Just ask the staff members at Charlene Manor, a skilled nursing facility in Greenfield that is part of the Berkshire Healthcare system. When speaking with BusinessWest, employees at the facility were unanimous in their opinion that while winning awards — and Charlene Manor recently earned a notable honor — is important, it’s the reasons behind those awards that are far more significant.

“In a hospital, you have people that come and go; in a skilled nursing facility, many of these residents are with us for a long period of time,” Margie Laurin, Charlene Manor’s marketing communications coordinator, explained. “We experience their milestone birthdays with them, we experience their joys and their pains. It’s much more than just providing clinical care — it’s providing that care with a level of compassion that I have not seen in any other work that I’ve done prior to being in this industry.”

Charlene Manor is celebrating its 35th year in operation, having opened in 1987. It has been growing and evolving ever since while remaining true to its mission — to give back to the community and provide a quality level of specialized programs and services that range from cardiac recovery to hospice and palliative care; from diabetes management and education to stroke recovery.

Which brings us to that award. The facility achieved an important distinction in 2021 — the American Health Care Assoc./National Center for Assisted Living (AHCA/NCAL) Silver Achievement in Quality Award.

“We experience their milestone birthdays with them, we experience their joys and their pains. It’s much more than just providing clinical care — it’s providing that care with a level of compassion that I have not seen in any other work that I’ve done prior to being in this industry.”

“Silver recipients have to outline their systematic approaches, and they have to demonstrate their quality and clinical outcomes and the sustainability of their organizational and process results that are linked to these outcomes to ensure success — how they meet certain challenges, and make sure that they meet key customer requirements,” said Laurin, noting that

Charlene Manor was one of two facilities in the Commonwealth that received this achievement.

To put that into perspective, there are more than 400 facilities providing such services in the state. Charlene Manor is the only skilled nursing facility that received this award — the other winner was an assisted living facility from eastern Mass.

“With our silver award, we were able to clearly demonstrate that we made improvements,” said Ashley LeBeau, administrator of Charlene Manor. “We responded to the feedback, which is really the key when you’re asking someone for feedback. You must then respond to it, put plans in place to improve it; we were very much able to do that.”

The team members at Charlene Manor can speak to this improvement with concrete evidence from over the years. The facility has a five-star rating from the Department of Public Health, and that rating has been maintained for more than two years. Customer satisfaction surveys from both short-term and long-term residents have shown improvement as well, and that demonstration contributed to Charlene Manor earning the silver award, said LeBeau.

For this issue, BusinessWest talked with Laurin and LeBeau about the Silver Award, but more about what went into earning it and what the honor says about the facility and its team.

The term ‘skilled nursing’ oftentimes is used interchangeably with assisted living and nursing homes, when in actuality they are quite different. Skilled nursing care refers to a patient’s need for care or treatment that can only be performed by licensed nurses. It can take place in a variety of settings — hospitals, assisted living communities, and in the case of Charlene Manor, skilled nursing facilities.

Skilled nursing is regulated by the Department of Health Centers for Medicare & Medicaid Services (CMS). To be certified by CMS, skilled nursing communities must meet strict criteria. They are subject to periodic inspections to ensure the quality standards are being met.

“That’s why this silver award is so critically important and such an honor — because these are such stringent criteria to have to be met so above and beyond,” said Laurin.

Skilled nursing can encompass a wide range of care. It can mean short-term care after someone has had surgery, physical or occupational therapy, IV therapy, as well as many other forms of care.

“With our silver award, we were able to clearly demonstrate that we made improvements. We responded to the feedback, which is really the key when you’re asking someone for feedback. You must then respond to it, put plans in place to improve it; we were very much able to do that.”

The majority of Charlene Manor’s referrals come from hospitals, but its reach has recently expanded. Due to its high-quality service and the surge seen in hospitals from the pandemic, the Department of Public Health chose to partner with Charlene Manor. Another important collaborative relationship Charlene Manor has is with Pioneer Valley Hospice & Palliative Care.

Skilled nursing staff include a variety of positions including RNs, LPNs, CNAs, medical directors, speech/language pathologists, and resident care assistants. And these professionals work together as a team.

Resident care assistants (RCAs) play an integral role within the facility. It’s an introductory role where individuals who are just starting off in the healthcare career can explore if it’s the right fit for them. They spend an intimate amount of time with residents, providing the most amount of care per day to patients while simultaneously building strong relationships with them.

Charlene Manor focuses on recruiting and aiding those entering the field, now more than ever — since the pandemic began, the skilled nursing industry has lost 241,000 caregivers according to AHCA.

“For this reason, it is critically important for us as an organization — we put in place strategies and do everything we can to encourage and nurture and promote these skilled caregivers within our facilities,” said Laurin. “And Charlene Manor specifically has been a community that has had a really strong history of providing employment opportunities and having good care around these positions.” 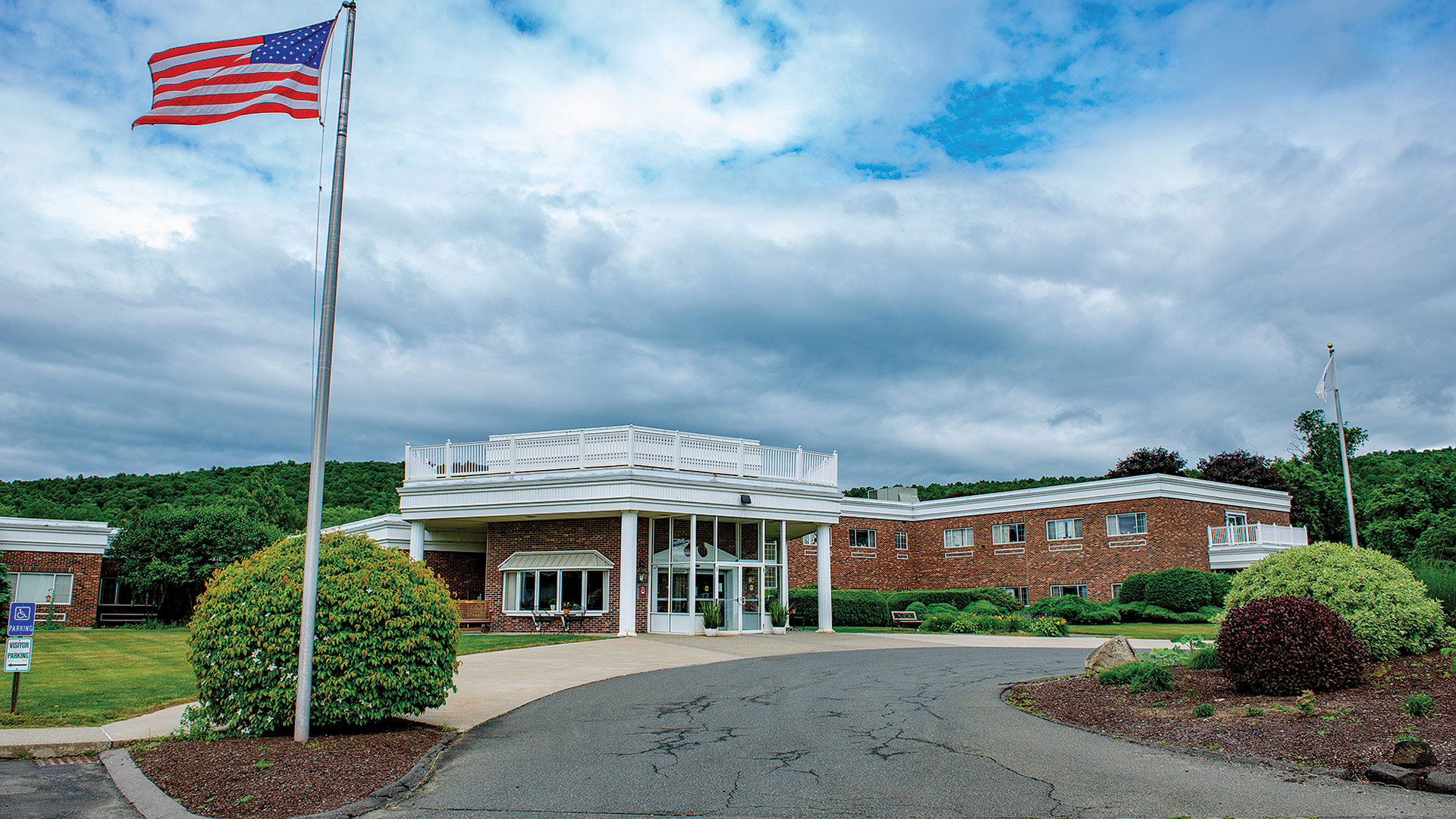 “We’ve had a number of entry-level staff go through nursing programs through our Stepping Stones program to become LPNs, RNs … some have gone through to get their BSN, and it’s just incredible the amount that we reinvest because we are not-for-profit,” said LeBeau. “We have a mission, and part of our mission is to reinvest in our people, and we do that every single day here.”

Indeed, while the AHCA/NCAL Silver Achievement in Quality Award is a noteworthy honor, recognition is not the motivation behind Charlene Manor’s skilled nursing services. The most rewarding aspect for those working at the facility is the ability to serve those in Franklin County and beyond.

“The rewards are immense. But speaking about providing care to this population — our residents and patients that we serve become much, much more than that,” said Laurin. “They’re like family. That’s why it’s critically important to recruit and invest in long-standing employees, because these are relationships. This is an industry that is about relationships. Not just the relationships with the residents, but with their families as well.”

A Focus on Care

Simply put, Charlene Manor has put in extraordinary efforts to help take care of their community members, and its Silver Achievement in Quality Award Silver is just one of many examples of how their work is paying off.

“As an organization, we are very proud of the work that Charlene Manor, and Ashley and her team, have done — especially during such a challenging time,” said Laurin.