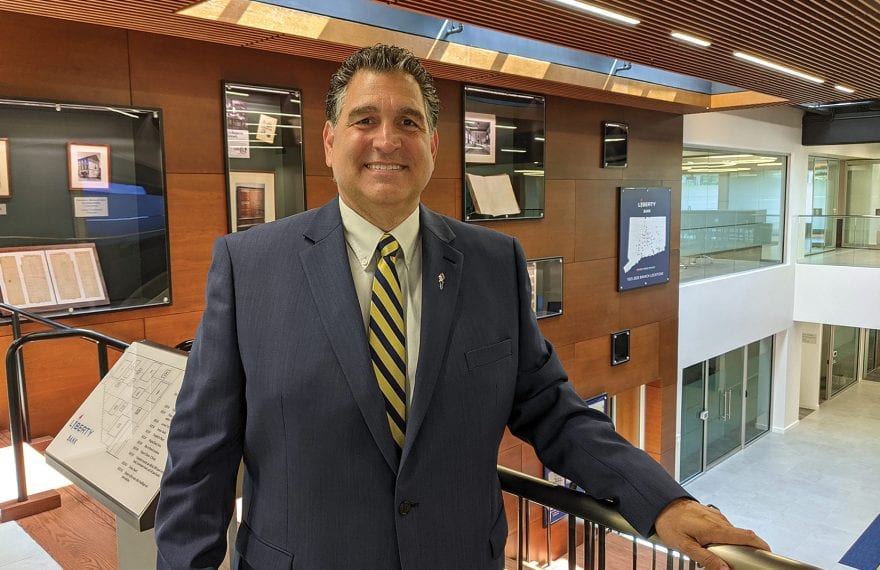 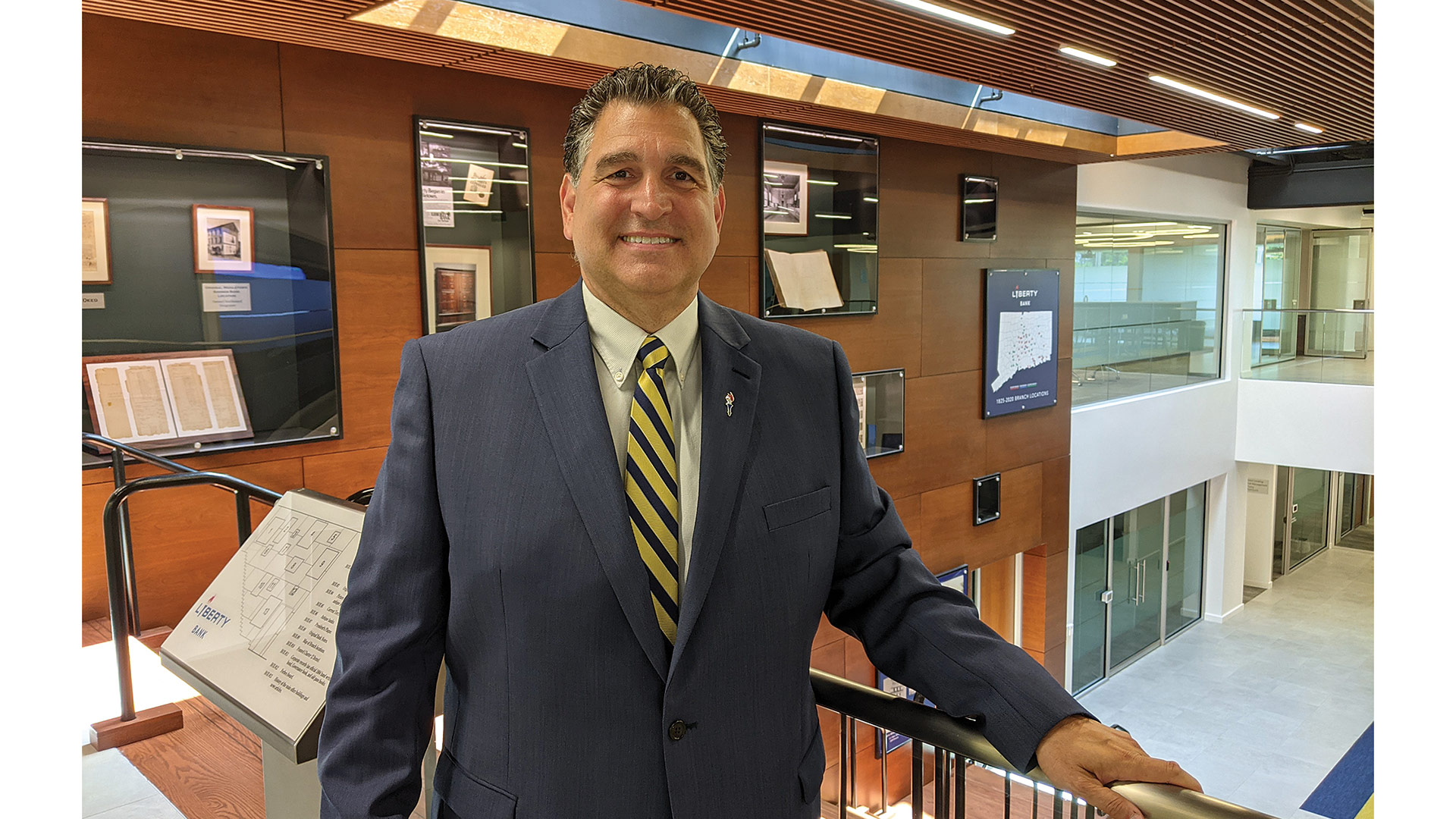 Tony Liberopoulos says Liberty Bank might be new to Western Mass., but its lenders are anything but.

Dave Glidden is no stranger to the Western Mass. banking community, and neither is the lending team he’s assembled to grow Liberty Bank — the Connecticut-based institution he currently serves as president and CEO — within this region. Liberty’s leaders believe those community ties — some of the Western Mass. team’s lenders have worked in this market for three decades — will prove fruitful at a time when customers are looking for experience and stability.

Liberty Bank is the oldest currently operating bank in Connecticut. But Dave Glidden prefers not to think in terms of state lines.

“We’ve been in Connecticut a long time, and very recently we’ve crossed the border into Western Mass.,” said Glidden, the bank’s president and CEO and a familiar figure to the Pioneer Valley’s banking community from his years as regional president at TD Bank.

The reasons for the northward push, he said, seemed obvious.

“When I looked at this opportunity and took the job, one of the things I talked about with the board and my teammates was that, when you think about it, there are so many similarities between Connecticut and the Greater Springfield market, economically and culturally; people work back and forth across the border.

“So, really, if you stop looking at state boundaries for a second, we really lend in that I-91 corridor, New Haven on up through Middletown, through Hartford, and now into Greater Springfield,” he went on. “There are many similarities in industries and types of businesses, and we know a lot of the borrowers, the centers of influence, the CPA firms, the legal firms … and we know many of the businesses.”

With the ability to assemble a team with that depth of experience in the market, Glidden said, expansion into this region — lending activity began last year, and a commercial loan-production office is opening this month in East Longmeadow — just made sense.

“Obviously, this commercial loan production under Tony’s leadership is the first foray over the border,” Glidden said, “and we’re continually evaluating and looking at retail branch sites and how we’ll build out the franchise over the course of the next couple of years in support of the commercial-lending activities that really started about a year or so ago.”

With more than $7 billion in assets but strong ties to its local communities, Glidden said Liberty is the kind of stable institution that appeals to customers in Western Mass., especially at a time when mergers and acquisitions (M&A) continue to shake up the landscape.

“With everything that’s going on in all the banking markets, there’s a lot of disruption with M&A, and it’s projected there will be a lot more M&A industry-wide,” he noted. “So, as a bank with our size and history, and the teams we have, we’re in a unique position where we can kind of out-local national banks and out-national local banks and be that entity in the middle that can deliver services and make decisions in a very local fashion, but has the scale and the size to grow with borrowers, usually past where a lot of the other community banks are restricted due to their size.” 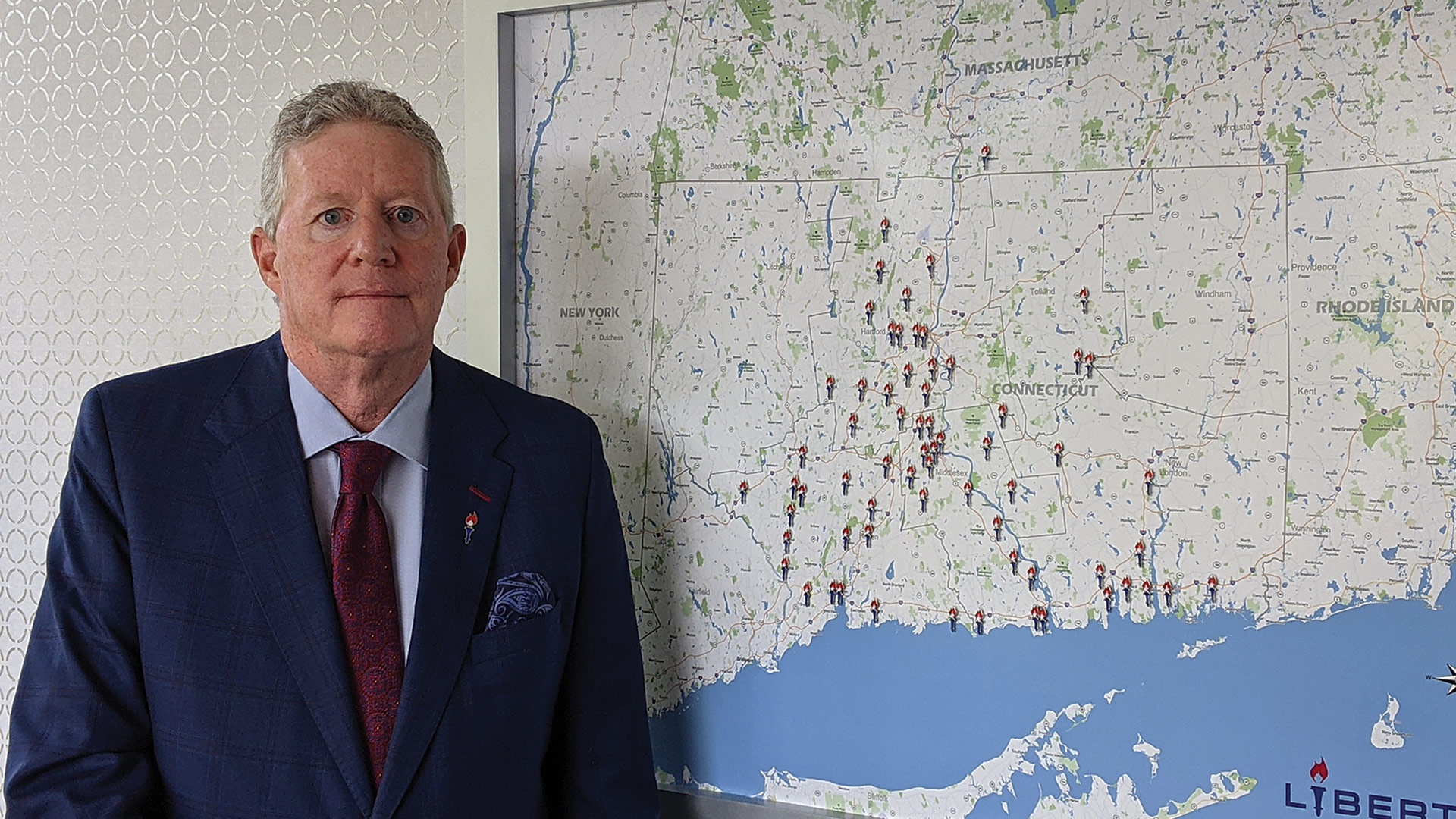 Dave Glidden with a map of Liberty’s locations, most of which are concentrated along, or not far from, the I-91 corridor.

While commercial lending is the main focus right now, Glidden said, he sees Liberty eventually expanding its presence to offer that type of appeal to retail customers as well. “When a bank gets acquired, customers often say, ‘my bank’s changing, my banking relationship is changing — maybe now is the time I should have the conversation with someone else.”

It’s a sense that was only supercharged by the pandemic, a time when online retailers thrived and changed people’s expectations about service delivery.

“We have to continue to deliver the right type of distribution system for our customers if we expect to gain market share and capture those who get disrupted due to M&A activity, or whatever other market event might happen,” Glidden told BusinessWest.

“There are great banks in Western Mass., super people, experienced bankers, but there’s going to continue to be disruption — everywhere, not just in Western Mass.,” he went on. “And we think, with our balance sheet and existing franchise and the investments we’ve been making, which have been significant over the past few years, to really up our digital offerings across the board, we’re in a great position to enter a great market that means a lot to the executive leadership here at Liberty Bank.”

Since launching activity in Greater Springfield, Liberopoulos and the rest of the lending team have assembled a broad variety of clients. “It’s across the board,” he said. “We’ll do loans up to $50 million for the right client, or even higher than that. We’re primarily looking at small to medium-sized businesses. We’ll look at investment real-estate deals, and we’ll look at any privately held business, if it’s the right size for us.”

Like the Greater Hartford market in which Liberty has recently expanded its presence, Glidden doesn’t see loans in a vacuum, but rather takes a big-picture look at how each loan-funded project or expansion impacts economic development in an entire region.

“It’s important, when you’re a community bank and you go into a market, that you have a strategy to align with and understand what’s going on in those markets. Who are the key economic-development companies, the drivers? Who are the key not-for-profits that we can align ourselves with and support? Because when we invest in the communities we do business in, it’s not only the right thing to do, it’s smart business.”

As it eyes growth across its footprint, including expansion of retail, investment, and other services in Western Mass., Liberty is making another kind of investment, Glidden said: in its digital channels.

Part of the bank’s strategy for this region includes what shape the physical footprint will take to support the services Liberty wants to provide, he noted — but that strategy must roll out in tandem with the digital one. 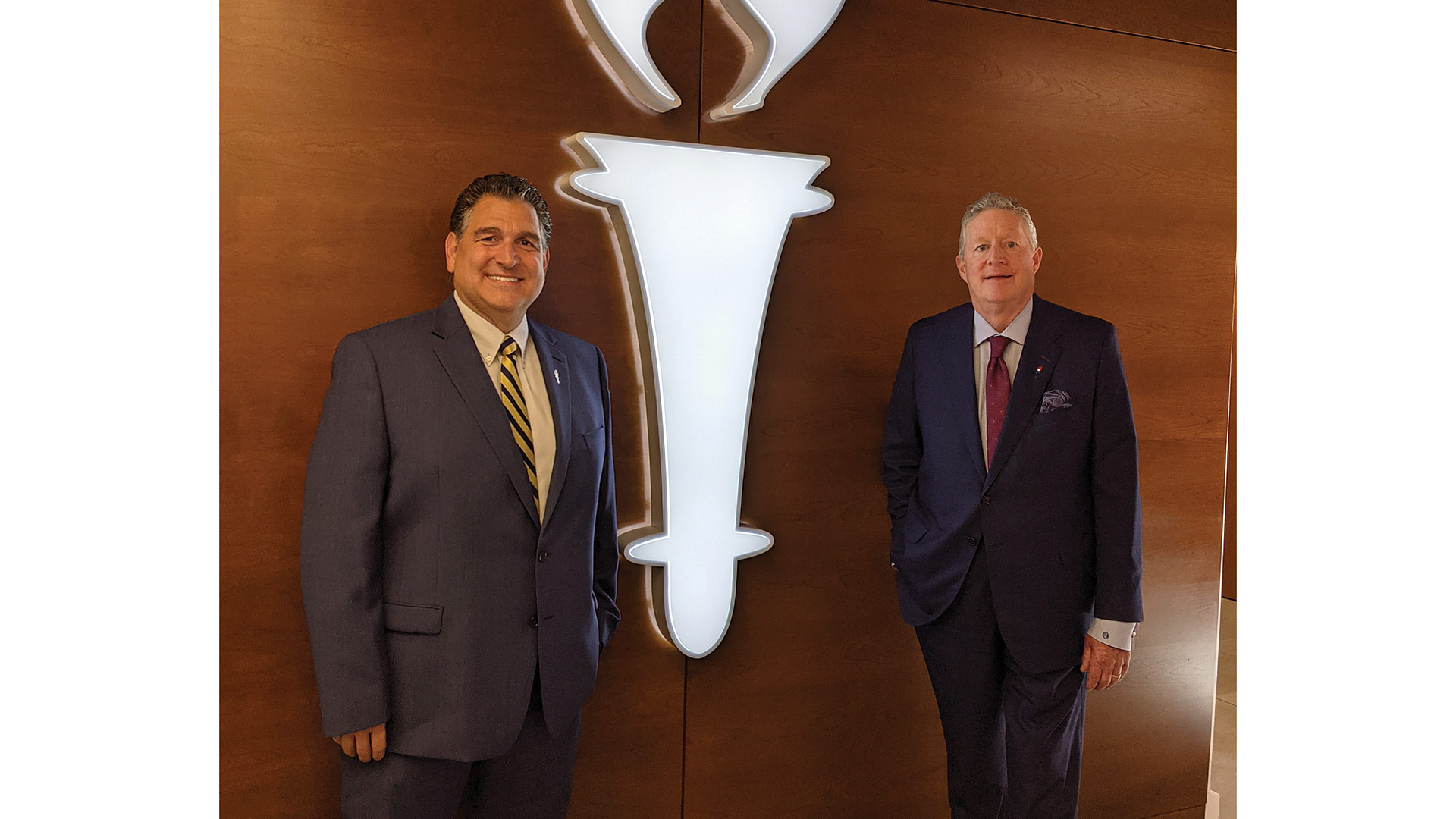 Tony Liberopoulos (left) and Dave Glidden say there’s a space in Western Mass. for a bank of Liberty’s size and local focus.

“Branches are changing, and customers’ habits are changing — they’re using them less, but that doesn’t mean they’re not still important,” Glidden said, noting that part of what he called his “aspirational three-year plan” has involved bolstering digital assets, so customers can choose how to interact with the bank.

“It’s not up to us to choose how customers do business with us. It’s for them to choose, and it’s incumbent on us to make sure we have all those channels there. Branches are one of them, as are online, digital, and live chat.”

As he noted earlier, Amazon and other online entities, particularly during the pandemic, have altered people’s expectations when it comes to retail, and banks are, indeed, a retail business — so a bank’s digital channels need to live up to those heightened expectations.

The pandemic impacted Liberty’s Western Mass. plans in another way, Liberopoulos said: by giving it an opportunity to stay aggressive when not every bank did.

“It was an interesting time. We came to work every day, took our precautions, properly distanced, wore our masks,” he said, noting that clients still wanted to meet, some in person, some by phone or Zoom, whatever made them most comfortable. And those meetings were often productive.

“We were firm believers that COVID was going to end, so we’d look at their financial performance prior to COVID,” Liberopoulos said. “We knew 2020 and 2021 were going to be difficult, but if they were strong in ’17, ’18, and ’19 — and if their interim results look good in ’21 now that we’re getting past vaccinations — we were very eager to win that business.

“When some other banks were uncomfortable lending because of the numbers they saw for 2020, we were not,” he went on. “We understood it’s about the owners of the business, the history of the business, and we were all convinced, here at Liberty Bank, that we could see the light at the end of the tunnel and we would find the right clients to work with.”

Glidden said he was “never prouder to be a banker” than he was in 2020.

He praised not only his own team, but his colleagues at other banks for working non-stop in those chaotic early days of PPP last spring, and kept working to get customers the help they needed.

“I could see it was a very unique, maybe the most unique, time in my career,” he said. “I really felt an obligation as a banker, that we’re the only way this money is getting out there in this once-in-a-lifetime — knock on wood — pandemic.”

Getting back to the consolidation landscape, Liberopoulos said acquisitions can often distance a bank’s philanthropic arm from the communities in which is does business, but Liberty continues to be focused on those activities.

“The bank is very sensitive to the fact that we’re seeing consolidations, so we’re seeing less money being given to non-for-profits in the community, and one of our chief slogans now is ‘be community kind.’ We want to give back to the community where we work, where we lend, and where we live. And we’ve done that already,” he said, citing donations to Ronald McDonald House, and the Boys & Girls Club as recent examples.

“It’s certainly been part of Liberty Bank’s DNA and corporate culture,” Glidden agreed, noting that the bank’s foundation, which he also serves as president and CEO, gives away around $1.5 million per year, and the bank itself contributes in the seven-figure range as well.

Which is even more important in an era of M&A activity.

“I just think, given the disruption and consolidation in the market, that we’re a bank that’s still local and makes decisions locally. We give back to our communities; we put our money where our mouth is.”

As one of the largest PPP lenders in Connecticut, Liberty also felt a responsibility to support community members who weren’t customers, which is why it serviced PPP loans for such individuals. In some cases, that opened the door to a new relationship opportunity.

In the end, Liberty grew during the pandemic — by about $1.2 billion during 2020, in fact. Some of that was PPP activity, Glidden noted, but about two-thirds sprung from new market share and new customers.

Liberopoulos is optimistic, too. “We’re new to the market, but we’re not new to banking. We’ve got an experienced, well-known team, and we make local decisions with quick turnaround time. We’ll make loan decisions on the spot, in front of a client, when we meet with them. That’s the kind of bank I’m happy to say I work for.”

And it’s the sort of bank that shouldn’t be constrained by state lines, Glidden added.

“Liberty Bank is coming to Western Mass. to be a business partner with the community. We’re not coming there just to make loans and take deposits. This is the first stake in the ground, so to speak, but I think everyone will see and feel our commitment to Western Mass. as we build out our franchise there.”