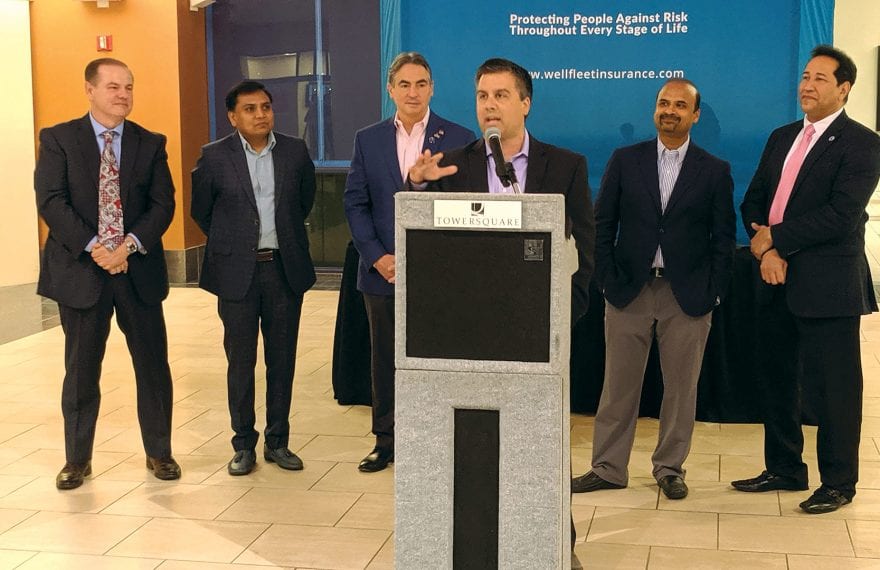 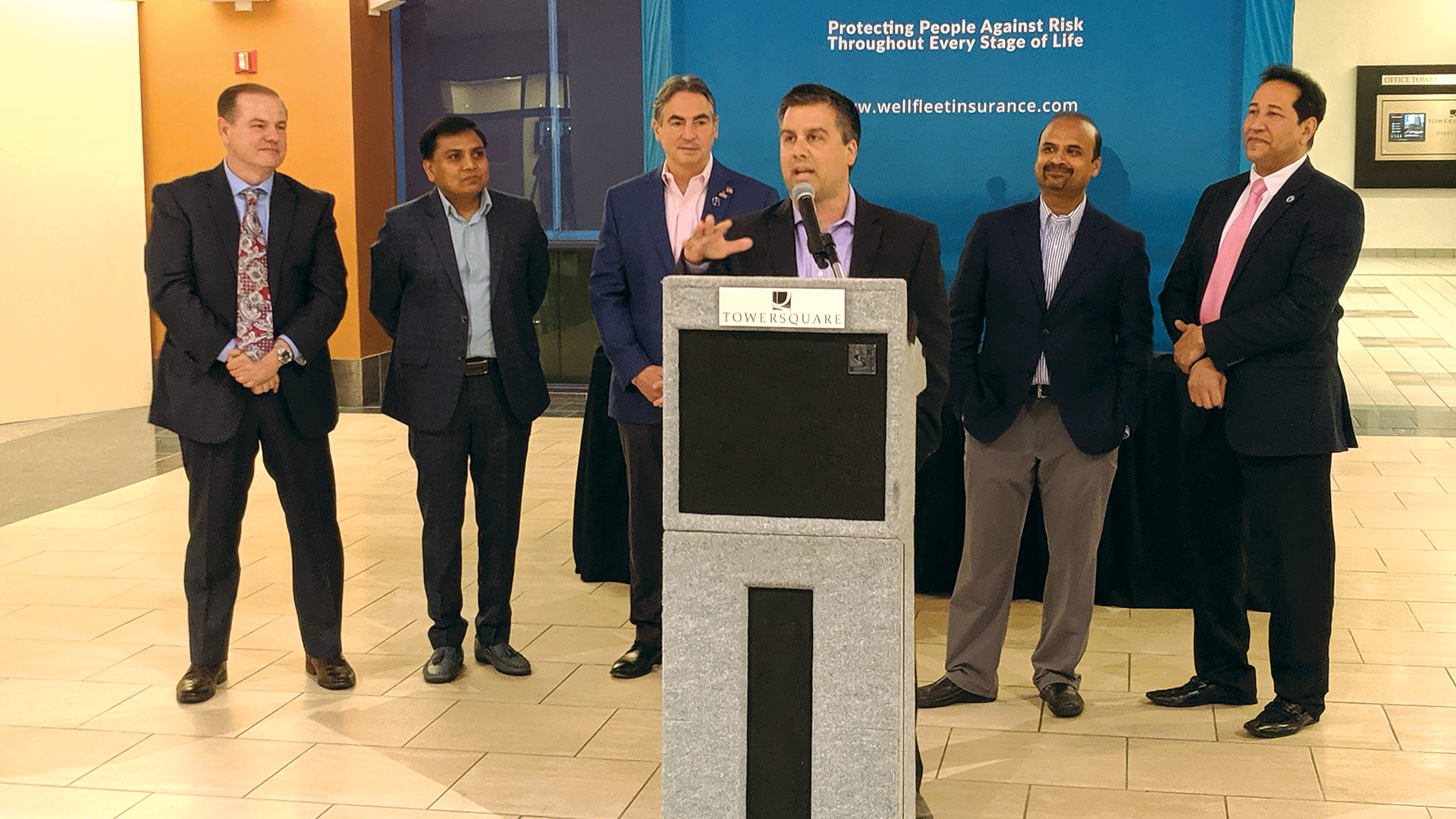 Tower Square has seen its ups and downs over the years, but its new owners have been aggressive about selling potential clients on the renovated space, convenient parking, downtown amenities, and simply being part of an economic renaissance in Springfield. Wellfleet took that pitch to heart, which is why it agreed to become the tower’s anchor tenant.

It’s even bigger when one considers how far the company has come, said Drew DiGiorgio, Wellfleet’s president and CEO.

“When we started, it was five employees,” DiGiorgio said. “My office was not an office — it was a desk and a chair located at the bottom of the stairs at a barbershop in Wilbraham. We would open up envelopes, and I would lick them because didn’t even have the little spongy thing. We answered the phones when they rang; we did everything. To go from that to this is pretty humbling, and I appreciate everyone’s support to get us here.”

“If this was five years ago, the issue might have been safety in the downtown. But the dynamic has changed. The downtown is attractive, there are all kinds of venues and attractions nearby, and security doesn’t appear to be an issue any longer.”

Wellfleet, a Berkshire Hathaway company providing accident and health-insurance products, recently staged a press conference to announce the relocation of its national corporate headquarters — and 150 of its employees — to the 10th, 11th, and 12th floors of Tower Square in August.

Wellfleet — which has built a national niche insuring college students, handling more than 100,000 students at more than 200 colleges and universities — has outgrown its current office space on Roosevelt Avenue in Springfield. The new offices at Tower Square will give employees up to 80,000 square feet of class-A office space and provide ample room for Wellfleet’s new and growing Workplace Benefits division.

“To me, Wellfleet is a home-grown, small, Springfield-based company which has grown to this size today, and we should applaud their success,” said Mitta, who announced that Wellfleet’s name will be placed on the tower as its anchor tenant.

Demetrios Panteleakis, principal of Macmillan Group, the real-estate firm that represents Tower Square, said his team was in discussions with Wellfleet for about a year as Wellfleet searched the suburban market for a home.

“We were the alternative. They were kind of weighing it against what the suburbs had to offer,” he said, adding that he was able to pitch a downtown headquarters as much more than a fallback. In fact, the more Wellfleet’s leaders considered Tower Square, the more it made sense.

“If this was five years ago, the issue might have been safety in the downtown,” Panteleakis told BusinessWest. “But the dynamic has changed. The downtown is attractive, there are all kinds of venues and attractions nearby, and security doesn’t appear to be an issue any longer.”

In short, a thriving urban center is simply more attractive than the suburbs to many companies. But that shift in perception didn’t happen overnight.

“I think it’s a culmination of everything the folks at City Hall, the Business Improvement District, and all the economic-development folks have been working on, rowing in the same direction, for the last four or five years,” he said. “The result is not only attracting new tenants, but bringing tenants from Westfield, West Springfield, Northampton, Agawam … these are folks saying, ‘Springfield is the heart of the economic engine in Western Mass., and that’s where we need to be; that’s where our employees need to be.’”

DiGiorgio said Wellfleet employees, when asked what’s appealing about Tower Square, cited the modern, renovated space itself, with its natural light, city views, and covered parking, as well as the food options downtown and the fact that the district has been emerging economically in recent years.

“In New England, it’s not a lot of fun when the snow and rain come, so having a secure garage, and having the ease of a building that kind of provides you everything you need over the course of the day, that’s highly attractive,” Panteleakis added. 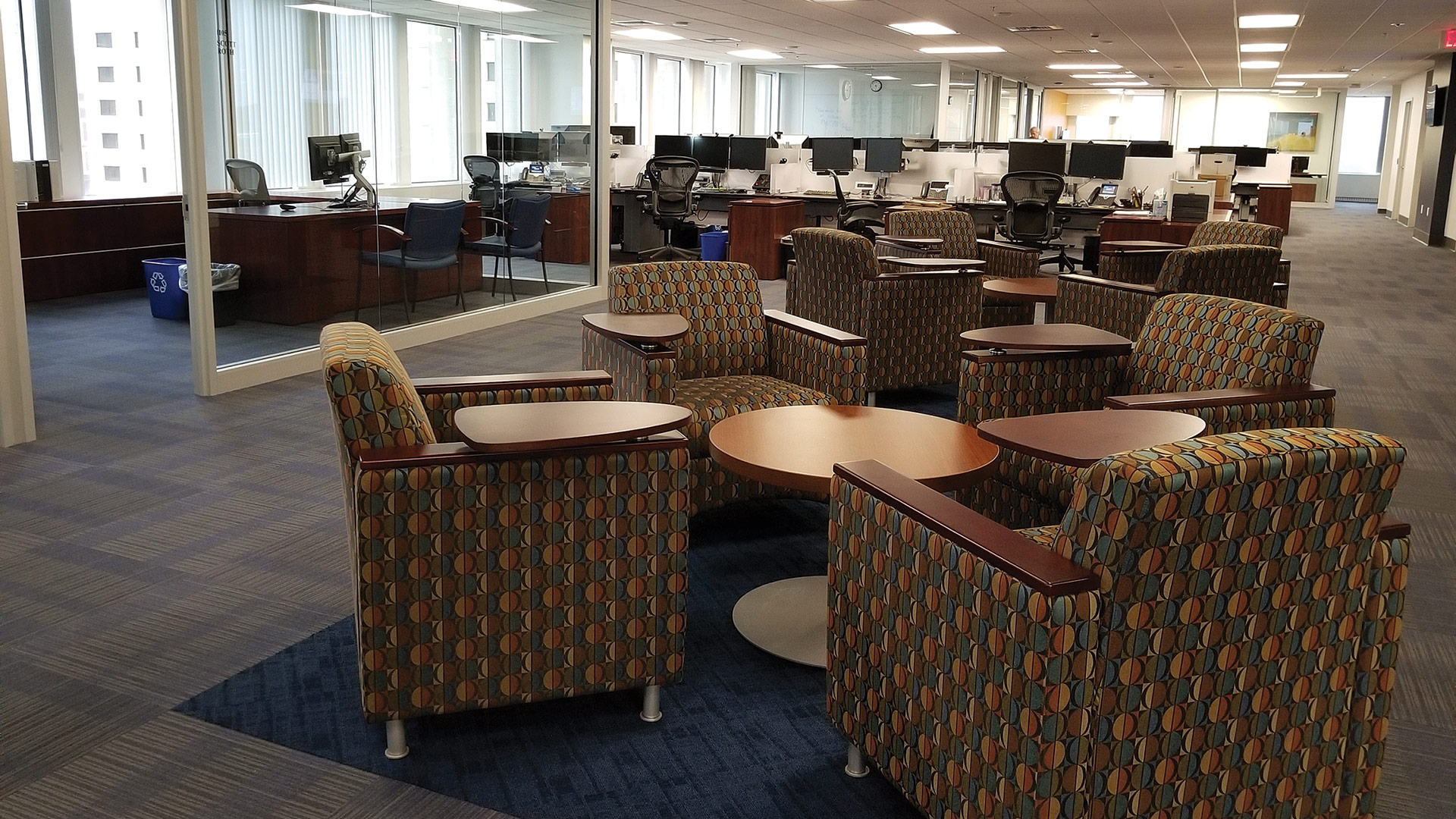 Formerly known as Consolidated Health Plans, Wellfleet branded under its current name in January, uniting its insurance carriers and claims-administration organizations under one marketing name. It boasts approximately 175 employees, 150 of whom work in Springfield; others work remotely or from satellite offices in Florence, S.C. and San Rafael, Calif.

“We believe being part of Springfield is important,” DiGiorgio said, noting that the company has long been involved in efforts like the Memorial Spring Cleanup, Link to Libraries, Friends of the Homeless, Rays of Hope, and Open Pantry. “We are active in the community. Our name is not well-known, but we think that will change in the future.”

Springfield Mayor Domenic Sarno noted that Tower Square’s owners have been aggressive and creative in bringing an eclectic mix of businesses to the facility, from Wellfleet to the YMCA of Greater Springfield to White Lion Brewing Co.

“A lot of people, years ago, said, ‘what can you expect? It’s Springfield.’ More and more people are saying now, ‘why not Springfield?’” the mayor said. “I won’t say the downtown is re-emerging as much as it is reinventing itself. Springfield is getting on the map. And my administration continues to be business-friendly because it brings jobs.”

At the end of the day, Panteleakis said, Tower Square is becoming an easier sell.

“When you walk people through the space and they consider the economics of it — for a few dollars more, they can have parking at their leisure, then the level of security and the amenities a class-A building has to offer — it sells itself.”

That’s why he enjoys those tours of the building with prospective tenants, and hopes more companies and organizations request them.

“What they need to understand is what Wellfleet understands — the level of the buildouts of the existing spaces in Tower Square rival anything you’d see in Boston or New York City,” he told BusinessWest. “These are class-A, high-tech buildouts, and there’s a difference between being in a class-B or suburban market and being in a state-of-the-art, class-A office space with spectacular views of the Pioneer Valley.”

At the press conference, Panteleakis said welcoming Wellfleet was “a special day” for the city and the office tower.

“It’s quite remarkable to have another insurance company that’s growing at the rate this company is growing, and it’s only fitting it makes its home in the marquee building in the center of the city, bringing its people, its energy, and its vitality to the downtown,” he noted. “It’s just a great day to see it happen to our city. I think it’s going to be one of many great announcements Tower Square has for you over the coming months.”