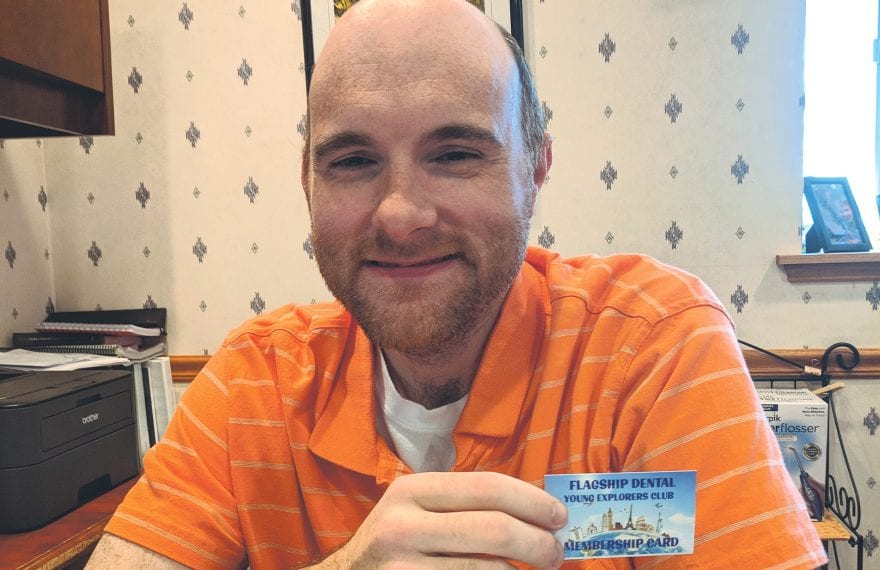 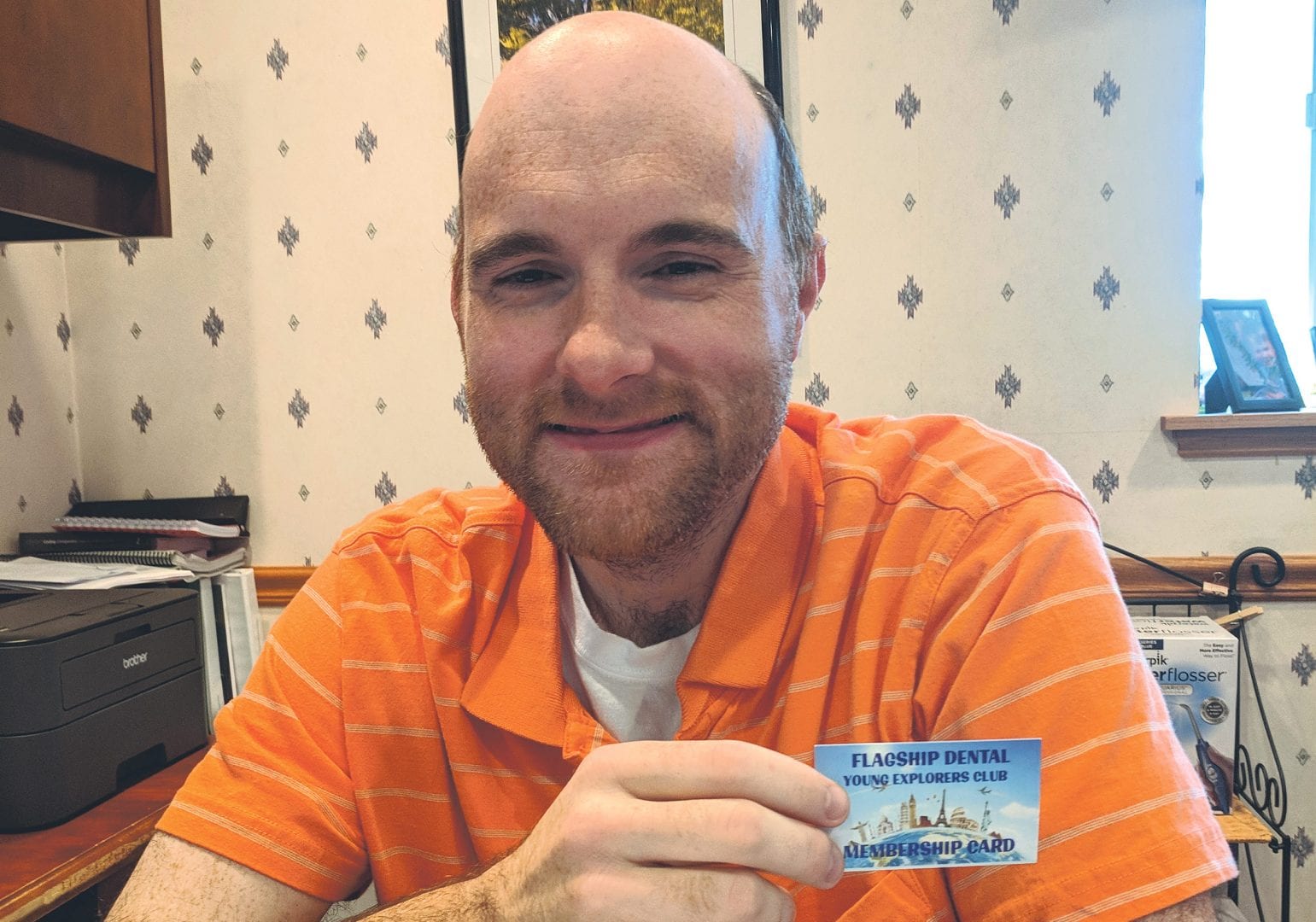 Adam Malmborg says kids don’t usually enjoy going to the dentist, but he’d like to make the experience a little more fun.

Going to the dentist may never rise to the level of fun for most kids, but one local practice is making it a little more enjoyable, by using a point system and prizes to motivate young patients to take care of their teeth — and improve their lives in other ways as well.

Adam Malmborg was a teacher before his current role at Flagship Dental in Longmeadow, so he knows a little something about motivating kids.

“I love working with kids,” said Malmborg, the practice’s hygiene coordinator and marketing assistant, whose mother, Katie, is Flagship’s practice manager and marketing manager. “She wanted a kids club — something to get kids more interested in coming.”

So he did some research — lots of it, in fact — into what dental practices around the country were doing to motivate their young patients to get serious about their dental health — a topic that many, understandably, aren’t that enthusiastic about.

“I used to be a teacher, so I know what kids like,” he told BusinessWest. “Basically, what I created is a points system; they can earn points here in the office, at home, and even at school.”

Indeed, the Flagship Dental Young Explorers Club, as the new program is called, assigns point values to dozens of achievements, from losing a baby tooth (five points) to scoring a cavity-free visit (25 points) to coordinating a dental presentation at their school (a whopping 500 points). Every 50 points wins a $5 gift card from a store or restaurant chain of their choice.

His mother, who has worked in dental offices for more than 40 years, notices the difference in attitude.

“They’re happy to come to the office, and that doesn’t always happen. It’s a good little reward for them,” Katie said. “I do the marketing for the office, but Adam has taken on the job of getting kids invested in their dental treatment and getting them motivated. They can earn points for coming in, for their report cards, and for things they can do in the community as well. It’s pretty cool.”

Since the program began in March, a few participants have already scored enough points to win a gift card — the options range from Starbucks, Red Robin, Subway, and Dunkin’ Donuts to Walmart, Target, Amazon, GameStop, and many others — while others have banked their points in a quest for a bigger reward. Either way, Malmborg said, they’re having fun making healthy choices.

“I remember being younger, and it’s like, what do I get for having great teeth?” he asked. “Really, nothing. I get a pat on the back and a new toothbrush. My mother was huge on dental care, so she was like, ‘good job, congratulations.’ But coming from a dental office, that ‘congratulations, you’ve worked really hard, we want to reward you’ makes a bigger impression.”

Members of the Young Explorers Club are given a membership card — showing it at an appointment earns two points — and a colorful badge; wearing this to the office earns five points, and uploading a photo onto social media wearing the button at school picks up another 10.

Being on time for an appointment is worth five points, a dental cleaning earns 10 points, X-rays get 15, and, as noted earlier, a cavity-free visit earns 25. “That pushes a lot of the kids to brush their teeth and floss,” Malmborg said.

And good works outside of school are rewarded, too, such as an A grade on a report card (two points), straight As (15 points), celebrating a personal achievement by sending Flagship a photo (15 points; one patient recently snapped a picture of her new puppy), and volunteering for community service (five points per hour). And those are just the tip of the iceberg.

“I just want to show the kids we’re supporting them,” Malmborg said of the community and school aspects of the program, adding that anything that gets children thinking about the dentist in a positive way, even peripherally, is a plus.

Some Tips to Ease
a Child’s Dental Visit

Are your kids reluctant to visit the dentist? The American Dental Assoc. recommends the following tips to make the experience less like — well, pulling teeth.

• Plan ahead. “If families want to avoid the rush to go back to school in August,” said ADA spokesperson Dr. Mary Hayes, “then plan on getting appointments for the beginning of the summer.”

• Encourage age-appropriate dental habits at home. To make cleanings easier, parents should encourage their kids to brush twice a day for two minutes and floss once a day.

• Timing is everything. Avoid cramming in a dentist appointment right after school or camp. “If the child has already been exhausted or had a bad day or had tests, they just don’t have the stamina to make it through the appointment successfully,” Hayes said.

• Make one child a model. If you’ve scheduled back-to-back appointments for your children, there’s a simple way to decide who goes first: choose the child who’s had the most positive experiences at the dentist. “You generally want the ones first who are more successful because the others get to see how it goes,” Hayes said.

• Hungry doesn’t equal happy. Feed your child a light meal before the appointment. “Hungry people are grouchy people. You want them to be comfortable,” Hayes said. Oh, and bonus points if your child brushes before an appointment. That’s just polite.

• Leave your anxiety at the door. If your heart races at the very thought of the dentist, your child can probably tell. “Kids pick up on parents’ anxiety,” Hayes said. “It’s important with kids, especially at 4, 5 and 6, because I believe the phobic adults are the ones who had bad experiences when they were that age.”

• Keep cool if your child won’t cooperate. If your child gets upset during her visit, the worst thing you can do is swoop them out of the chair and leave. “The next visit is going to be harder. You still have to help them get through part of the visit,” Hayes said. “Give the dentist every opportunity to turn the visit around.”

He’s not done adding to the reward list, he noted; for example, he intends to add points for getting a cavity filled. The rationale? The cavity may not have been an ‘achievement’ worth celebrating, but doing something about it certainly is. “I’m just trying to give the kids more chances at points.”

During each visit, the hygienist fills out a report card based on the child’s account of school and home activities, which is used to add points to his or her total. The patient also gets a second report card, this one based on the results of the cleaning.

“Parents can take this home and have a discussion with their kids — ‘oh, I see you have moderate amounts of tartar or plaque. OK, what do you think we can do better?’” Malmborg noted. “It’s all about the communication at home between the parents and kids. It’s the same as a school report card — it’s important that parents have something to go by.”

Speaking of school, the reason coordinating a dental presentation at a school is worth so many points is because it’s an opportunity to spread these messages about proper dental hygiene to as many kids as possible.

“When we meet with the kids at school, we give kids the tools they need to properly take care of their teeth, because some kids don’t have that — they don’t know what to do, or some parents might not be focused as much on it. That’s why we go in and do that.”

The Young Explorers Club is a significant aspect of a shift at Flagship to attract more families with children — a change that’s evident just walking into the waiting room, which features a tepee to climb in, a brightly lit fishtank, an interactive selfie station, and pencil-and-crayon activities lining the walls.

“Our patients are primarily older people, and we did the waiting room with the kids in mind,” Malmborg said. “I don’t want to say they have fun going to the dentist, but we want to get kids excited.”

The activities — word searches, coloring contests, and other brain games — earn three points each, and kids are allowed to do three per visit. “It just gets them doing something in the office, because sometimes in the waiting room, anxiety happens, so as long as folks are doing something fun, they’re not as nervous.”

So far, he told BusinessWest, the points program and other kid-friendly touches are working and getting children thinking more about their dental health.

“They come in, proudly wearing their button and showing their membership card. They’re like, ‘Mr. Adam, I did this.’ I say, ‘don’t worry, I’ve got your points.’ We’ve had a couple of kids turn in their points for gift cards, and they’re already ready for their next one.”

As a program that’s fun for the younger set and keeps them focused on good decisions, Malmborg thinks Flagship has settled on a winner. And he’s glad it’s simple to manage, because, while he’s seen other practices outsource a similar program, that isn’t his style.

“It’s a lot of fun,” he said. “It’s more personable when we can communicate with the kids. This way, they’re not getting rewarded by an outside company; they’re getting it from someone they know.”