A Worthy Class of Difference Makers

BusinessWest’s Difference Makers Class of 2015 may be the most compelling to date, and for many reasons.

For starters, many of the honorees might be considered non-traditional by some. There’s a local employer (granted, a Fortune 100 company); a nonprofit that is, by most standards, still just getting started; the director of another nonprofit, tasked with community events such as fireworks displays and parades; the organizers of a bike race that raises funds to battle cancer; and the new ownership team at a landmark Springfield restaurant, one that only reopened its doors 10 weeks ago (see story HERE).

Because these honorees are non-traditional, that might lead to speculation, if not open debate, about whether some — or all — are worthy of that designation Difference Maker. While we acknowledge that some of these selections are certainly different, a very strong case can be made for each. And we’ll make those cases. In no particular order:

• MassMutual. There are some, perhaps many, who would say that giving back to the community is what is a Fortune 100 is supposed to do. Perhaps, but not all of them do, and not many do it to the extent that this Springfield-based institution does.

Meanwhile, it’s not merely the level of philanthropy, or community involvement, that sets this company apart, but the nature of that involvement. Its giving is part of a considered strategy to build a stronger community and a capable workforce for the long term — a holistic approach, as one observer called it.

• Judy Matt, executive director of the Spirit of Springfield. While some might debate whether someone who organizes a fireworks display should be placed in the same category as an individual devoted to improving childhood literacy, we do not.

They are both making a difference in their own way. Matt, who has been at the forefront of creating, enhancing, and continuing community-focused, family-focused events for more than three decades, deserves a huge amount of credit for improving quality of life here and providing some light in some otherwise very dark times in Springfield’s history. Bright Nights is her best piece of work, but it is a deep — and powerful — portfolio.

• Katelynn’s Ride. When BusinessWest launched this recognition program in 2009, one of the goals was to show that you don’t have to change the world — or be a Fortune 100 company, for that matter — to make a difference. You can do that by changing a small part of the world.

And Katelynn’s Ride does just that. The K-Ride, as it’s often called, named in honor of Katelynn Battista, who lost a courageous battle to leukemia at age 11, makes a difference in the lives of cancer patients and their families through donations to Baystate Children’s Hospital and the Jimmy Fund. And, more specifically, it makes a huge difference locally through its support for a new position at Baystate — a liaison of sorts between families of cancer patients and the specialists who provide care. And it’s making a difference simply by bringing together hundreds of people to battle a common — and hated — enemy.

• Valley Venture Mentors. While this nonprofit, economic-development agency is really just getting started, it is already making a difference as it works toward creating what its founders describe, alternately, as an entrepreneurial renaissance and an entrepreneurial ecosystem.

Springfield is light years away from being Silicon Valley or Cambridge, and it will likely never approximate what those communities have done. But at least people can talk in those terms. Years ago, there was no such talk, and VVM has brought about that change.

• The new ownership team at the Student Prince and the Fort. ‘The restaurant has only been open for two and a half months!’ ‘No one’s really sure how it’s going to fare!’ ‘It’s just a restaurant!’ ‘How can these individuals be Difference Makers?’ We acknowledge all these opinions and questions and understand their origins.

But this new ownership team — The Yee family, Peter Picknelly, and Kevin and Michael Vann — are already making a difference by keeping another of Springfield’s institutions from being relegated to the past tense. And they’re making a difference because of the energy they’re creating in Springfield, and for ensuring a better future. 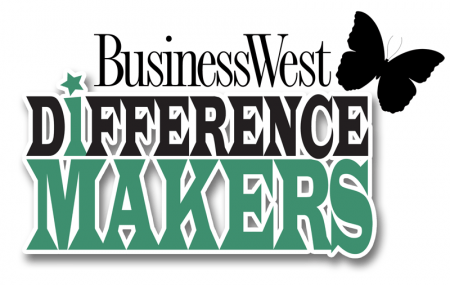 When BusinessWest launched its Difference Makers program in 2009, it did so with the sentiment that there are many different ways in which an individual or a group can make a difference in the region.

Since then, the various groups of winners have proven that such thoughts are merely an understatement, and the class of 2014 did that perhaps better than any other.

The honorees were Paula Moore, a school teacher who started the Youth Social Educational Training (YSET) Academy to help keep young people off the streets and out of trouble; the Gray House, a nonprofit that provides a host of programs and services ranging from a food pantry to adult education to its Kids Club; Michael Moriarty, an attorney and director of Olde Holyoke Development Corp., who has been passionate about childhood literacy; Colleen Loveless, who has expanded the reach and the impact of Rebuilding Together Springfield in dramatic ways; and the Melha Shriners, a fraternal organization that changes lives in many ways, but especially through its efforts to help fund the many Shriners Hospitals for Children.

“The class of 2014 showed that difference makers come in many forms and take on a wide range of missions,” said Kate Campiti, associate publisher of BusinessWest. “In each case, though, the overriding goal is to improve life for the people who live in this region.”

And there are many more stories still to be told, she went on, adding that BusinessWest is now accepting nominations for the Difference Makers class of 2015.

The nomination form on page 13 explains essentially how this process works, said BusinessWest Editor George O’Brien, who noted that the phrase ‘Difference Maker,’ as the class of 2014 proved, is a truly subjective phrase with a number of meanings.

“Since Difference Makers was launched, we’ve recognized business executives, nonprofit managers, college presidents, a crusading police chief, and a woman who founded a program to fill the shelves of school libraries,” he explained. “All these stories are different, but the common thread is people — and organizations — stepping up to improve quality of life here in Western Mass.”

“Since the beginning, the readers of BusinessWest have helped its staff with the difficult task of selecting honorees by relating these remarkable stories of how individuals and groups are making a difference,” he went on. “And we’re seeking your assistance again.”

As with another BusinessWest recognition, 40 Under Forty, Difference Makers is a nomination-driven process, Campiti said, urging those who propose an individual or group for consideration to be thorough with their nomination and, in simple terms, effectively answer the question ‘why is this nominee a Difference Maker?’

Nominations, which can also be completed online here, are due at the end of the business day (5 p.m.) on Dec. 15. The winners, as chosen by a review panel comprised of BusinessWest writers and editors, will be profiled in the magazine’s Feb. 9 edition and saluted at the annual Difference Makers gala, to take place in late March.

2010
• The Irene E. and George A. Davis Foundation
• Ellen Freyman, attorney and shareholder at Shatz Schwartz and Fentin, P.C.
• James Goodwin, president and CEO of the Center for Human Development
• Carol Katz, CEO of the Loomis Communities
• UMass Amherst and its chancellor, Robert Holub