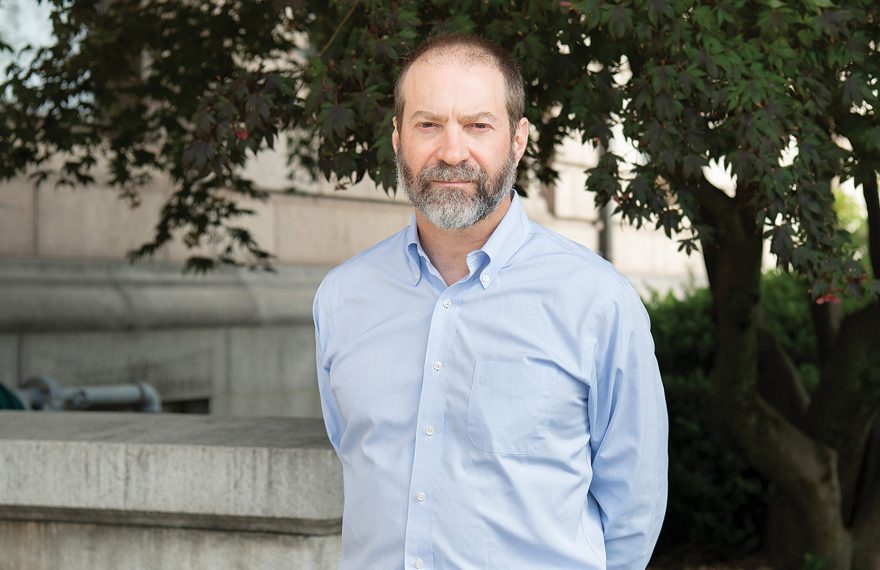 He Convened a Broad, Effective, Street-level Response to a Pandemic 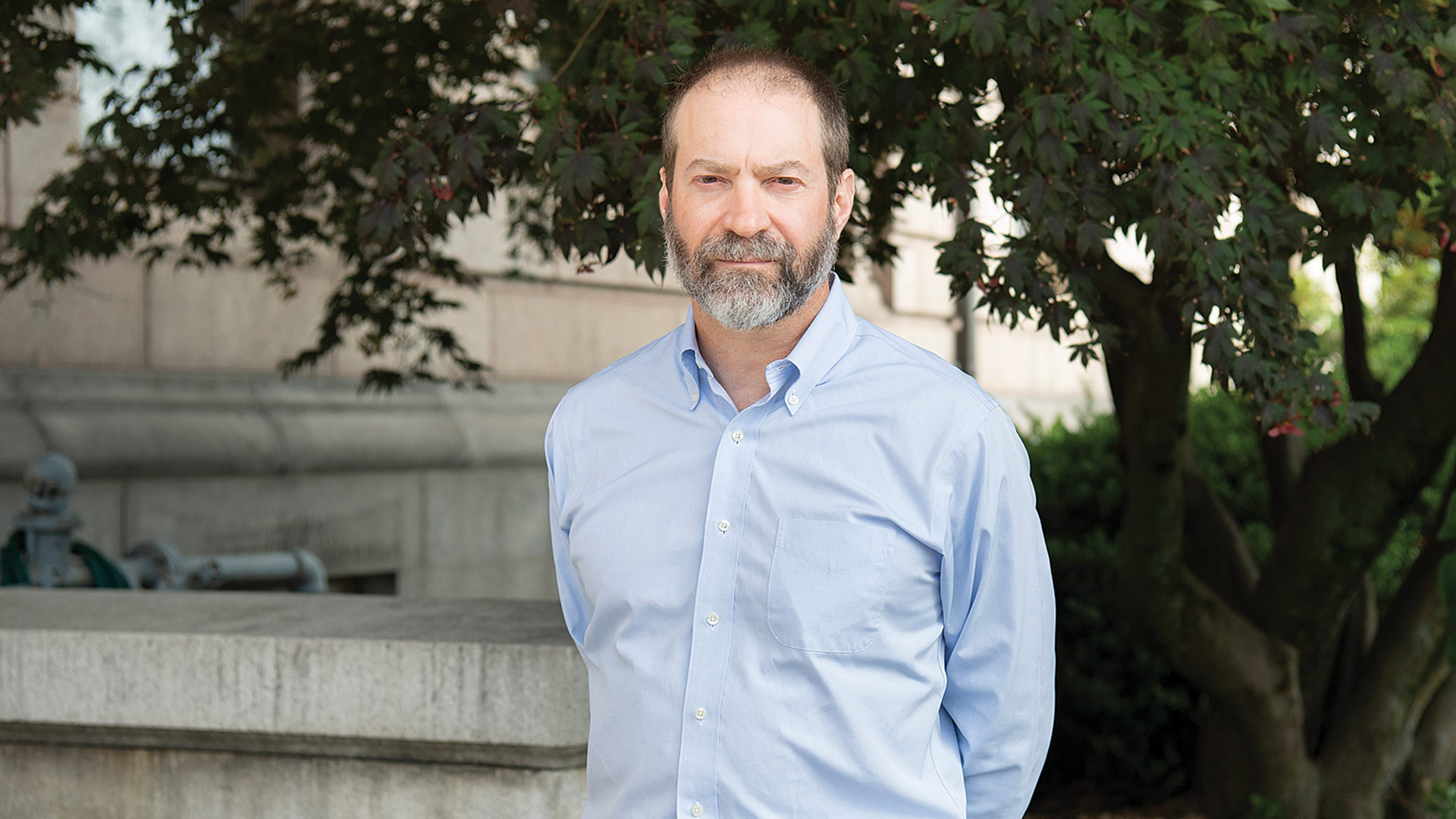 From his years working at a VA hospital in Rhode Island to his more recent community-health role overseeing Baystate Health’s medical practices in Springfield, Dr. Paul Pirraglia has always seen himself as a problem solver.

“It’s gratifying to take care of a patient and get a problem solved, or at least controlled for them — when you can address a concern that is having an impact, not just around a health issue, but in a broader sort of way,” he said. “Take a patient who has diabetes. You can get their diabetes under control, but because food is such a huge part of diabetes, if you can actually get them access to good, nutritious foods, then it’s not just about the diabetes; it’s a life changer in a way.

“As medical professionals, we really want to make a difference in people’s lives,” he went on. “So it’s gratifying to be able to serve when there’s a substantive need.”

Which is why Dr. Andrew Artenstein, Baystate’s chief physician executive, who spearheaded pandemic response throughout the system when COVID arrived early in 2020, asked Pirraglia and Dr. Jackie Spain, co-chief medical officer of Baystate’s BeHealthy ACO, to convene a workgroup to mitigate the impact of coronavirus on the most vulnerable patients in the community, particularly those with significant social needs.

“It was clear that traditionally underserved populations were going to get hit especially hard by this pandemic.”

The group looked at factors that could contribute to risk, such as low-income housing, where COVID cases were occurring, where ACO members lived, medical conditions were associated with worse COVID outcomes, as well as solutions such as access to pharmacies that home-deliver, food delivery, and transportation.

“On a personal level, I’m drawn to research: here’s a vexing problem; how do we solve it?” Pirraglia said, which is one reason this strategy resonated with him. “When Dr. Artenstein said we needed to do something, it was very, very early on, but it was clear that traditionally underserved populations were going to get hit especially hard by this pandemic. He said, ‘do what you need to do; I’ve got your back.’ So what Jackie and I did was convene a group which was not limited to just Baystate; we got all the leaders we needed.”

That included professionals from a wide range of offices at Baystate and beyond, from infection control to diagnostics and laboratory; from diversity, equity, and inclusion to community relations.

“We were able to pull together a multi-disciplinary group of folks who saw the importance of convening and doing this work,” Pirraglia said. “Despite the jobs they had and their schedules, we met on a weekly basis for many, many months in a row; attendance was phenomenal. That’s because people saw the need to do this.” 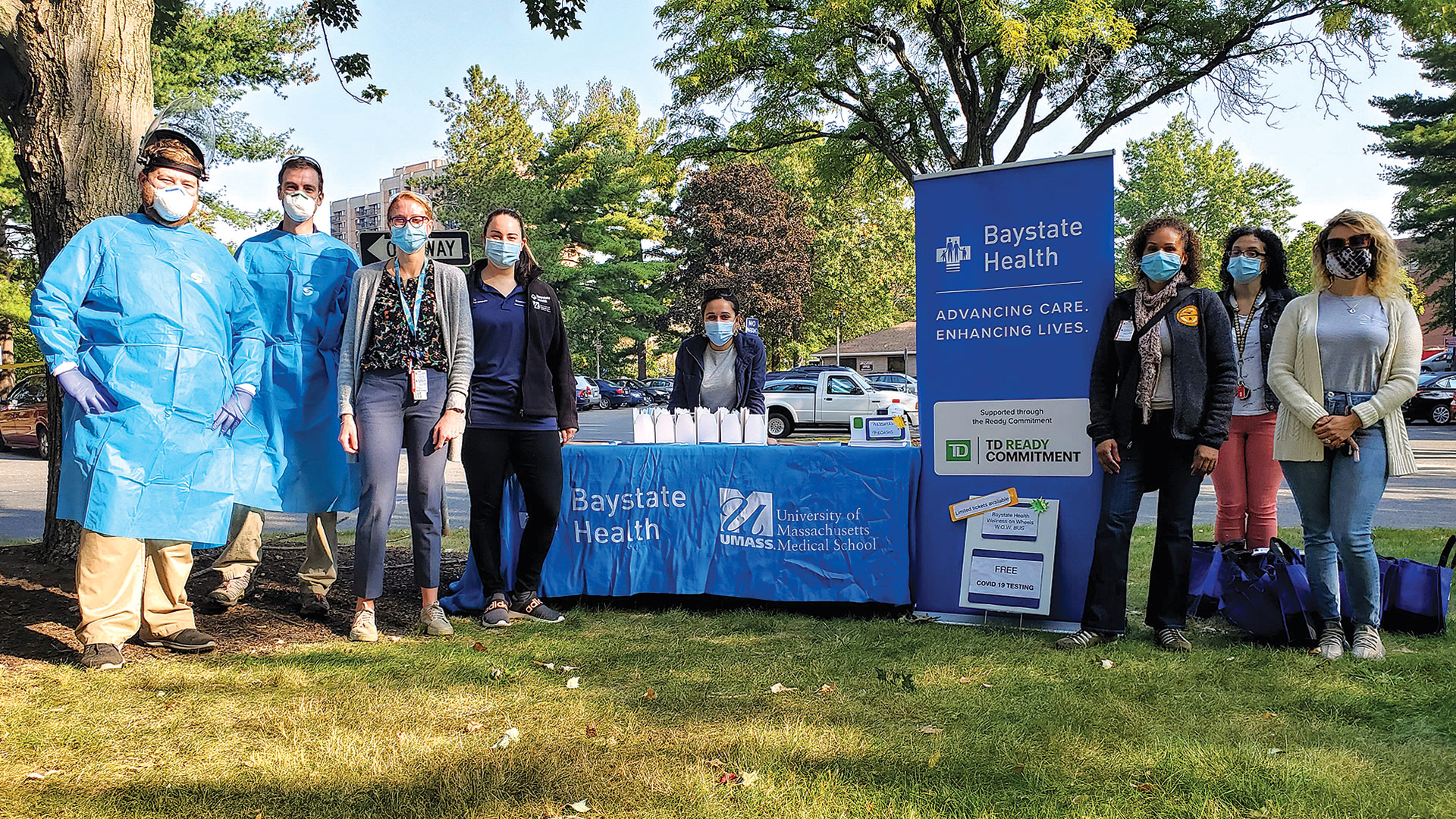 This Springfield Housing Authority testing event was organized by the COVID mitigation team.

The goal was to figure out the needs of the Springfield population and communicate with them in a way that was meaningful, and the work progressed rapidly.

Initially, the workgroup explored ways to protect people who were at risk, trying to catch people who had not been infected and keep them from getting infected, while identifying who was infected and making sure those around them had protection. To aid in this effort, a grant from the Community Foundation of Western Massachusetts enabled community health workers (CHWs) to supply materials such as facemasks, portable pulse oximeters to measure blood-oxygen levels, and room dividers and air mattresses so families could quarantine within their own living spaces.

“We really broke into two groups, one group more patient-facing and another group more community-facing, and then continued to meet and engage and make sure there was good crosstalk back and forth between us,” Pirraglia told BusinessWest, while stressing the importance of communication early on.

“The communication was with the community and within all the different groups that were participating in this workgroup. But we were also communicating with our community health workers, the on-the-ground folks, the ones gathering the patient needs and delivering on those needs. And the communication, I have to say, was pretty robust, in large part because people were committed to making this happen.”

The group performed geographic analysis to determine where to focus its efforts, gathering information about patient conditions in various areas so they could inform the CHWs on the ground about which areas were riskiest and who needed help, he explained.

“I can’t emphasize enough how important our community health workers were in this work. We were the coaches, but they were the players; they were the ones on the field making this happen.”

In nominating him for the Healthcare Heroes award in the Collaboration category, Michael Knapik, Baystate’s vice president of Government and Community Relations, noted that Pirraglia — an attending physician who sees some of the city’s most vulnerable patients at Baystate Mason Square Neighborhood Health Center and also a professor of Medicine at UMass Chan Medical School – Baystate who teaches residents at Baystate High Street Health Center and Baystate Brightwood Health Center — has always been mission-driven.

“This became especially important as the COVID pandemic snapped into sharp focus the inequities that have been occurring in healthcare,” Knapik said. “People who were already suffering due to inequities related to their vulnerabilities — socioeconomic, racial, ethnic, and identification factors as well as medical comorbidity all contributing — were now at highest risk from COVID-19 in terms of cases, hospitalizations, and death.”

But Pirraglia himself stressed multiple times during his interview with BusinessWest that he’s not the Healthcare Hero here, not really.

“I can’t emphasize enough how important our community health workers were in this work,” he said. “We were the coaches, but they were the players; they were the ones on the field making this happen. Based on priority lists that we made for them, they were able to reach out to patients and find out what their needs were. We created a needs assessment, and then the CHWs were the ones who came up with a contact-free delivery system. COVID mitigation isn’t their primary work, but they jumped in with both feet: ‘what do you need us to do?’ If you ask me, they’re the heroes.”

As the initial surge eased and vaccines became available early in 2021, the workgroup pivoted to that effort, as vaccination delivery to traditionally underserved groups has been a challenge in a state where early allocations from the federal government were deemed insufficient to supply both mass-vaccination sites and smaller providers, Knapik noted. The rollout through a state registration site put those without access to the internet, as well as transportation to such sites, at a disadvantage.

To address this, Baystate started to vaccinate patients age 75 and older from its community health centers in lockstep with the state’s phased rollout, with staff calling patients and inviting them to get vaccinated. In all, they were able to vaccinate 650 people over the course of six weeks, many of them individuals who would have had difficulty getting to any of the state sites. Meanwhile, the workgroup used a series of webinars and other outreach programs to communicate the importance and safety of vaccines.

Pirraglia and his team prepared a lengthy article for the International Journal for Equity in Health last year called “COVID-19 Mitigation for High-risk Populations in Springfield,” detailing the workgroup’s efforts. It concluded, “our highly intentional and methodical approach to patient and community outreach with a strong geographic component has led to fruitful efforts in COVID-19 mitigation. Our patient-level outreach engages our health centers’ clinical teams, particularly community health workers, and is providing the direct benefit of material and service resources for our at-risk patients and their families. Our community efforts leveraged existing relationships and created new partnerships that continue to inform us — healthcare entities, healthcare employees, and clinical teams — so that we can grow and learn in order to authentically build trust and engagement.”

That’s not to say the group couldn’t have done some things differently, Pirraglia said. “It’s difficult because we’re not in a setting where these entities would necessarily be meeting and collaborating. So there was probably more we could have done that was broader and more in concert.

“But I feel confident that, if another crisis came, we could convene another group, or at least use the methodology we used,” he continued. “Certainly, the community outreach and patient-oriented piece of it worked really well, and we’d probably carry that forward if we had another crisis. It really was, in my mind, highly effective.”

As noted earlier, Pirraglia has always taken a mission-based approach to care.

“What I mean by that is we take care of a traditionally underserved population with a lot of social challenges in their life,” he told BusinessWest. “These are patients who have difficulty with travel, with food, with shelter, with a lot of other issues in their lives. So just being able to deliver care is more challenging because the patients oftentimes have these other contexts to deal with. Our work has been to try to deliver the best care we can to our patients despite some of the challenges they face.”

Throw in a pandemic, and … well, you can see why we consider the effort heroic, even though Pirraglia doesn’t consider himself a hero.

“It was a really gratifying experience to have people totally on point, using their expertise in trying to figure out this really scary problem,” he said. “We learned that you can be nimble, you can be collaborative, you can tackle a really complex problem. And when you’re working on a group like this and the communication is good, the sense of mission is good, and there’s clarity about where we’re going with it, great things can happen.”