FIRST LEGO League Sends Kids on a Journey of Learning 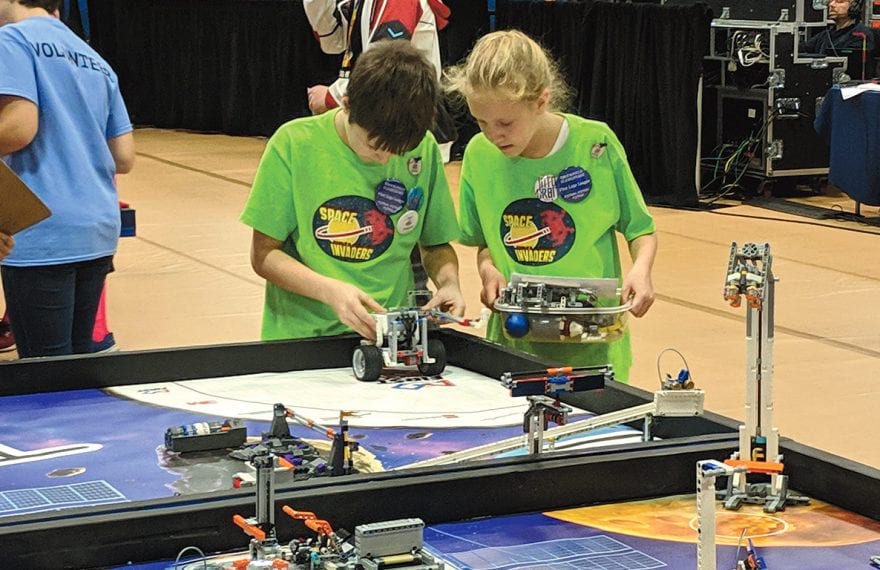 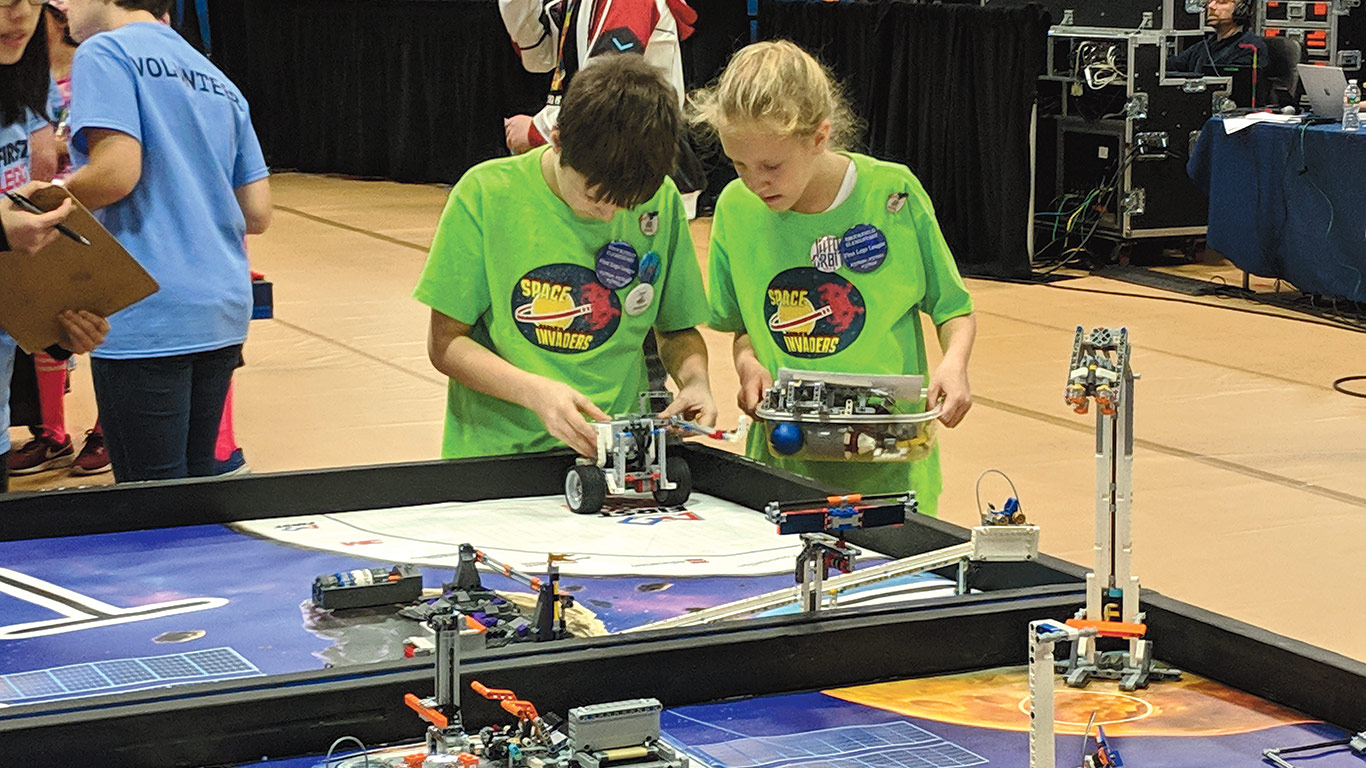 A team from Feeding Hills gets ready to put their robot to the test.

Seeing a group of middle-schoolers design, build, and program robots that perform specific, detailed tasks on cue is an impressive sight. But the impact of the FIRST LEGO League, which boasts teams in numerous schools throughout Western Mass., goes far beyond engineering training. It’s also teaching young people communication skills, teamwork, and confidence — all key traits to take into whatever career they choose, whether in the STEM fields or not.

As the robotic rover methodically navigated a landscape of obstacles, it relied on its programming to perform any number of tasks, from extracting core samples to angling a solar array to crossing a crater. If the programming — honed over months of diligent trial and error — failed, so did the robot.

That’s OK, though — this wasn’t a billion-dollar piece of outer-space equipment at stake, but a robot built from LEGO Mindstorm parts, and performing tasks on a colorful, space-themed table. And these weren’t astronauts or NASA engineers performing experiments, but area elementary and middle-school students showing off their prowess at the recent FIRST LEGO League Into Orbit Challenge at Western New England University.

“It’s more than just the robots. Yes, the engineering is important — the math and the physics behind it — but more important than that is the teamwork, the critical-thinking skills, and the communication skills the kids develop.”

After competing head to head with each other, seven of those teams advanced to a statewide competition in Worcester a week later, and from there, the top teams moved on to championship events this spring.

“It’s all about taking your classroom lessons — the math, the science — and applying them in a real-world situation,” said Dana Henry, a senior mentor for the regional FIRST (For Inspiration and Recognition of Science and Technology) program, who first connected students with robotics in Agawam 18 years ago.

“It’s more than just the robots,” he told BusinessWest. “Yes, the engineering is important — the math and the physics behind it — but more important than that is the teamwork, the critical-thinking skills, and the communication skills the kids develop.”

The FIRST LEGO League challenges kids to think like scientists and engineers. During this year’s space-themed season, teams choose real-world problems to solve and then build, test, and program an autonomous robot using LEGO Mindstorms technology to solve a set of missions.

Last months’s event, the Agawam Qualifier, is in its 11th year, moving to WNEU this season after outgrowing its previous space at Agawam Junior High School, Henry noted. 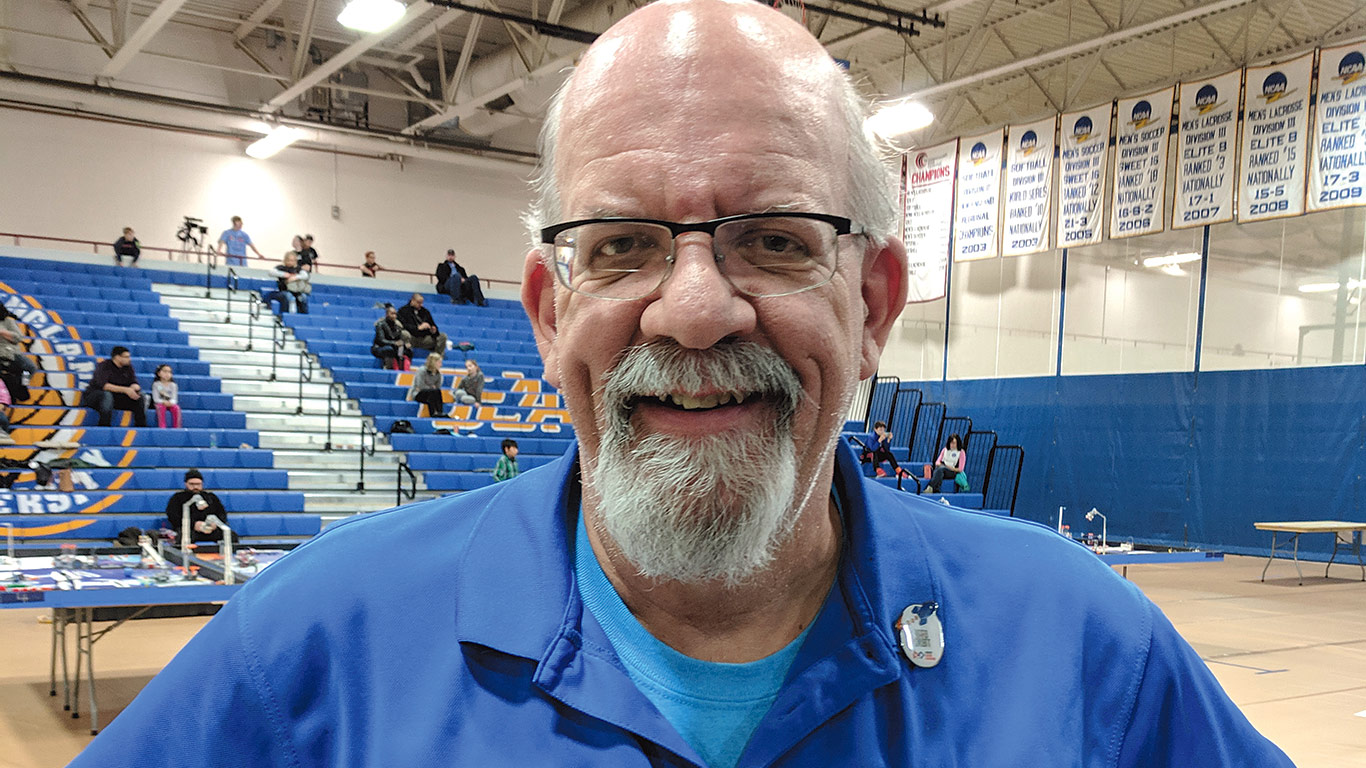 Dana Henry says FIRST LEGO League competitors are applying classroom lessons to real-world problems, and gaining a raft of skills while doing so.

“We have four programs in Agawam, and we help other teams, at other school systems in the area, get up and running,” Henry said of his role with FIRST. “Western New England came in with the facility and some resources, and they are working with a couple of local teams themselves. It’s been a pretty great ride so far.”

Suleyman Demirhan, a science teacher at Hampden Charter School of Science in Chicopee who oversees that school’s robotics club, explained that the faculty coach’s role is to teach students the basics of building and programming the robot — and researching issues as they arise — but it’s important for students to learn how to accomplish their goals with minimal hand-holding.

“They learn a specific topic for their project, and how to design a robot and program it. The coach is there just to guide them, to provide the right materials and supplies for learning the robotics, and then we get to see their progress. We’re teaching them how to solve problems. It’s a learning process,” Demirhan said.

“Actually, they teach each other and learn from one another,” he went on. “I see it like working at a company, like being an engineer, but at the same time being a middle-schooler. They’re learning to solve all these engineering problems, and then they learn how to solve the programming problems.”

At the cornerstone of the program are a set of core values, through which participants learn that friendly competition and mutual gain are not separate goals, and that helping one another is the foundation of teamwork.

According to the league website, those core values include discovery (exploring new skills and ideas), innovation (using creativity and persistence to solve problems), impact (applying what we learn to improve our world), inclusion (respecting each other and embracing our differences), teamwork (understanding that we are stronger when we work together), and fun (enjoying and celebrating what we do). 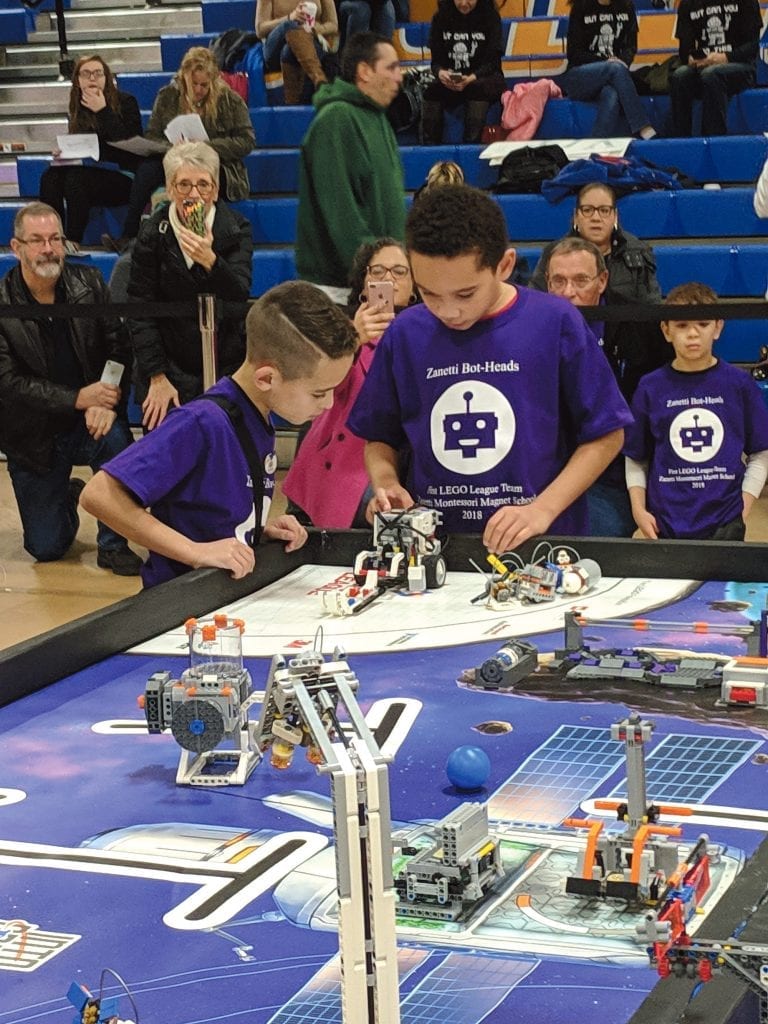 The student-designed robots are all different, taking myriad approaches to tackling similar challenges.

So the goal is more than learning robotics, engineering, and programming. But even the tasks themselves extend far beyond the robots. Each year, teams are mandated to research a real-world problem such as food safety, recycling, energy, etc., and then develop a solution.

As part of this year’s Into Orbit theme, teams considered the challenges humans must overcome to travel around the solar system — such as extreme temperatures; lack of air, water, and food; waste disposal and recycling; loneliness and isolation; and the need for exercise — and research and present a project, not unlike at a science fair, that aims to solve one of those problems.

“With this year’s theme, they designed a project that helps astronauts in space travel improve their physical conditions and mental health, or it could be anything that supports astronauts,” Demirhan said, noting that his school’s two teams took on the problems of growing food in space and designing an effective trash compactor.

The competition itself centers around the LEGO robots designed and built by the students, he went on. “Each challenge needs to be solved by a robot which is running autonomously. So the students program the robots and make specific attachments that work with different challenges. They don’t only design these attachments, but design and write the programs.”

If the programming is off by the slightest margin, the robot will miss its target on the table — and miss out on critical points needed to post a high score and advance.

“With each one of these challenges, they encounter difficult areas with the programming,” Demirhan went on. “Some programs might work in a specific environment and might not work in a different environment, and they’re trying to write the best program that can work in many different conditions. For example, light could be a factor — robots have light sensors, and the amount of light in the practice room could be different than in competition. So the student needs to solve this challenge and write a really good, efficient program that can run in both these environments.”

For students inclined to this type of work, Henry said, it’s a fun way to learn to apply STEM (science, technology, engineering, and math) concepts while developing critical-thinking and team-building skills, and even soft skills like how to talk to the judges about their robots in an engaging way — yes, they’re judged on that, too.

“Not only do they have to build a robot to compete on the table, but they’re also being judged on a project, and they have to adhere to all the core values throughout the FIRST program,” he added. “It’s about communication skills and critical-thinking skills. It’s much more than just robots.”

Through the FIRST LEGO League, Kamen and Kristiansen always intended for young people to discover the fun in science and technology but also develop in a positive way as people. Henry said he has seen exactly that.

“We had one kid that came through the program who was very shy, ate his lunch in the corner all by himself at his junior high school, but he came into high school and absolutely bloomed. He got into college, and now he’s an engineer with NASA. I’m telling you, if he doesn’t go to Mars, he’s going to be one of the engineers that gets us there.”

Other students in the program have gone on to non-science fields, like teaching, music, and the culinary arts, he continued, but the lessons they learned about solving problems and working with others are applicable to any field.

For those who do aspire to a career in engineering or robotics, however, the FIRST program does offer a leg up, Demirhan said, both in the college-application process — schools consider this valuable experience — and gaining career skills at an earlier age than most future engineers do.

“They’re all doing real-world engineering. Once they go to an engineering school, they’re seeing problems like these and learning how to solve them. So this is really a tiny engineering program that has massive applications. We’re teaching real-world problems and coming up with good solutions to them.”

In short, students are creating ideas, solving problems, and overcoming obstacles, all while gaining confidence in their abilities to positively use technology. To Henry, that’s an appealing mix.

“The STEM part is important, absolutely, but it’s more than just that,” he said. “I can’t stress that enough. We’ve seen kids blossom in so many ways.”