The Message: This Isn’t Your Parents’ Belchertown 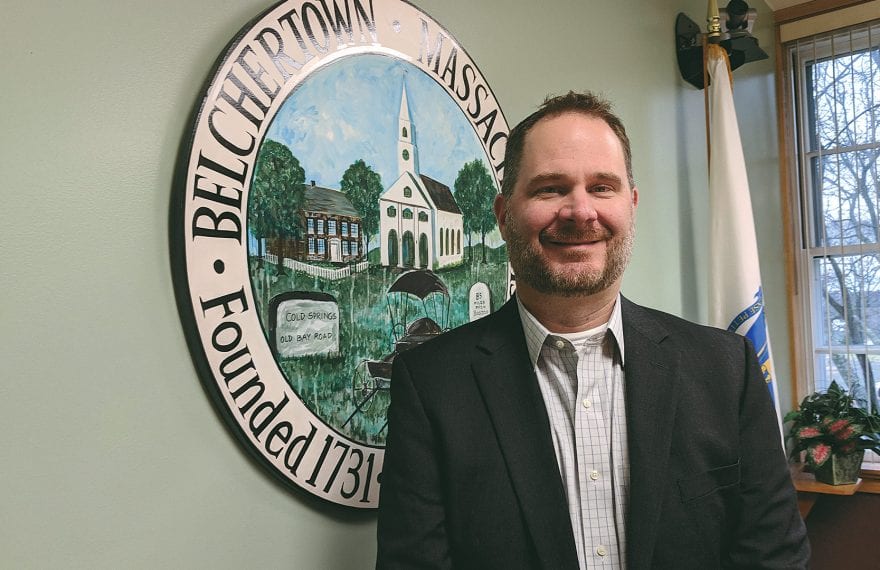 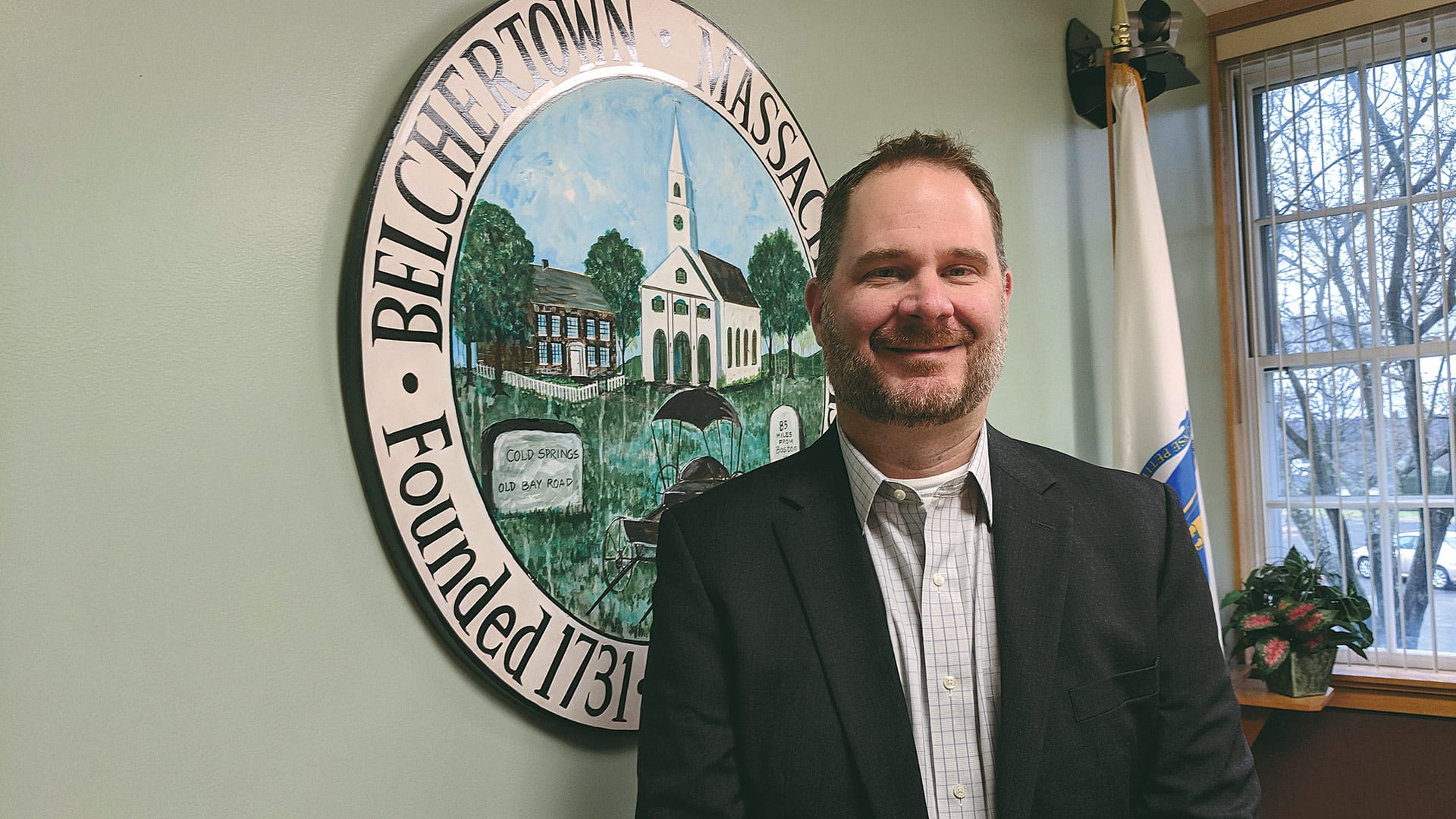 Nicholas O’Connor says recent projects have created considerable momentum in Belchertown, “like a snowball rolling down a hill.”

Nicholas O’Connor says there’s a generational split in Belchertown when it comes to new amenities and development in general — but that line has become increasingly blurry.

“There’s the old guard who don’t want anything to change; they want it to be a bedroom community, and they still lament the fact that we have a Stop & Shop and a Family Dollar. There’s no changing their minds, and I get that,” said O’Connor, who chairs the town’s Board of Selectmen.

“But by the same token,” he went on, “we can’t sustain the services that we provide in a town this size, with the great schools we have, without revenue, and 93% of our revenue comes through taxation. We don’t have a big business base — so, in order to have more, you need to generate more.”

And ‘more’ is a good word to describe economic activity in town, particularly along the section of Route 202 running from the town common past the Route 21 intersection to the Eastern Hampshire District Courthouse, a mile-long stretch that has become a hub of development, from a 4,500-square-foot Pride station currently under construction to a 4,000-square-foot financial center for Alden Credit Union; from Christopher Heights, an assisted-living complex that recently opened on the former grounds of the Belchertown State School, to a planned disc-golf course.

These projects, balancing town officials’ desire for more business and recreation, have been well-received, O’Connor said.

“Even among the old guard, I sense a split. There’s a large community of longtime Belchertown residents who are yearning for these things that are finally happening. I think it’s a minority of people who wish Belchertown would be like it was in 1970. That dynamic has shifted a bit.”

That said, it takes plenty of planning to build momentum for projects — not to mention state and town funding and approvals at town meetings — but he sees the dominos falling.

“We don’t have a big business base — so, in order to have more, you need to generate more.”

“With a lot of the ideas we’ve had over the past few years, shovels are finally hitting the ground. We’re really in a year when things are starting to progress.”

The 83-unit Christopher Heights has been a notable success, growing its resident list every month and exceeding its forecasts, O’Connor noted. Nearby, Belchertown Day School and Arcpoint Brewing, a veteran-owned business run by a couple of Belchertown locals, both plan to break ground on new facilities in the spring.

At the same time, Chapter 90 money came through for the renovation of that key stretch of Route 202, a project that will include new road signaling, crosswalks, sidewalks, and bike lanes, making the area more pedestian- and bicycle-friendly. Meanwhile, Pride owner Bob Bolduc will put in a sidewalk and a pull-in as part of his new building, which will accommodate a new PVTA stop.

“People will be getting out in front of his store, and that’s a win-win for everybody,” O’Connor said. “That whole road project will certainly change things from the common down the hill, all the way to the courthouse.”

Belchertown has plenty of potential to expand its recreational offerings, O’Connor told BusinessWest. For example, a town meeting recently appropriated funds to create an 18-hole disc-golf course in the Piper Farm Recreation Area.

O’Connor said disc golf has been rapidly gaining in popularity. “We’ll be clearing in the spring, breaking ground, and hoping to be throwing discs by the fall. There’s been interest growing in town, which is good because we’re going to need public effort for the clearing. I think a lot of that’s going to be done by community members and volunteers.”

He envisions the course as another piece in a day-long outing families could have in that area of Belchertown, with attractions ranging from baseball at the town’s mini-Fenway Park to Jessica’s Boundless Playground, to a 1.3-mile walking trail behind the police station that circles Lake Wallace. Meanwhile, state Sen. Eric Lesser was instrumental in securing money to tear down some tennis courts and build a splash park.

O’Connor would also like to see ValleyBike Share make inroads into Belchertown, and he wants to revisit discussion around expansion of a regional rail trail through town.

“A lot of people in town have tried these things before. The rail trail got voted down years ago,” he said. “Belchertown hasn’t always been ready for this type of progress, but we’ve had a large influx of younger families over the past 10 years or so, and different people standing up in positions of leadership. Just in the last four years, we have a new chief of police, a new Recreation director, a new Conservation administrator, a new senior-center coordinator. Not that the leadership before wasn’t doing the job, but I see new folks stepping up, and new ideas and new interests coming to the fore. That’s not a comment on the past, but it’s progress.”

And progress takes time, O’Connor said, noting that roadwork plans for 202 have been in flux for years, while Bolduc owned the future Pride site for a long time with no shovels in the ground until the assisted-living complex and other developments began to come online.

“It takes one project, and everybody starts going, ‘oh, there might be something there,’” he said. “The governor has been out here, and we’ve seen a lot of the lieutenant governor the last couple of years. Once you start brick and mortaring, now you get money for roads, you’re awarded more money for cleanup, and people really get on board. The momentum becomes attractive, like a snowball rolling down a hill. Nobody wants to go it alone, but then they see all these ancillary businesses, and it really starts to come together.”

To O’Connor, it’s not hard to see why businesses would want to set up shop in Belchertown. There’s the single, low property-tax rate, for starters, the well-regarded schools, and a widening flow of road projects aimed at making the town easier to navigate.

But not simply pass through, he added.

“I grew up in Amherst, and my dad lived in Wales while I was growing up, so I drove through his stretch every weekend. Then I went to UMass, and I saw them build all the hotels on Route 9,” he recalled.

“Now, I certainly don’t want to be Hadley — we want to keep our business within the character of the town; no one’s interested in a dynamic change to the town. But I thought to myself, a lot of these parents are driving home to Boston after parents’ weekend — maybe they don’t have to stay on Route 9; maybe they can stay here and take a walk on the Quabbin and hit an antique store and whatever else gets developed. I think there’s a lot to be said for us being a main thoroughfare between Boston and Western Massachusetts. Everybody gets off exit 7 and 8 to drive through here. We see a lot of cars, and it would be nice to get them to stop.”

Of course, for business owners, a lot of cars is a good thing, and the impending development of sidewalks, bike lanes, and bus routes will continue to drive traffic into what has really become the heart of activity in Belchertown.

“We love our town common, but in terms of a business center, an economic center, that’s moving down the hill. And a lot of the businesses there will benefit from the infrastructure upgrades.”

O’Connor told BusinessWest he can envision a future where Belchertown can be both the scenic, classic New England town of the past and a bustling destination. Illustrating that picture for other people can be a challenge, but he keeps trying.

“We need patience to get these things moving,” he said. “There’s definitely investment that needs to be made by business owners — not just in money, but in belief.” u