For Knee and Hip Replacements, Teamwork Is the Key to Success 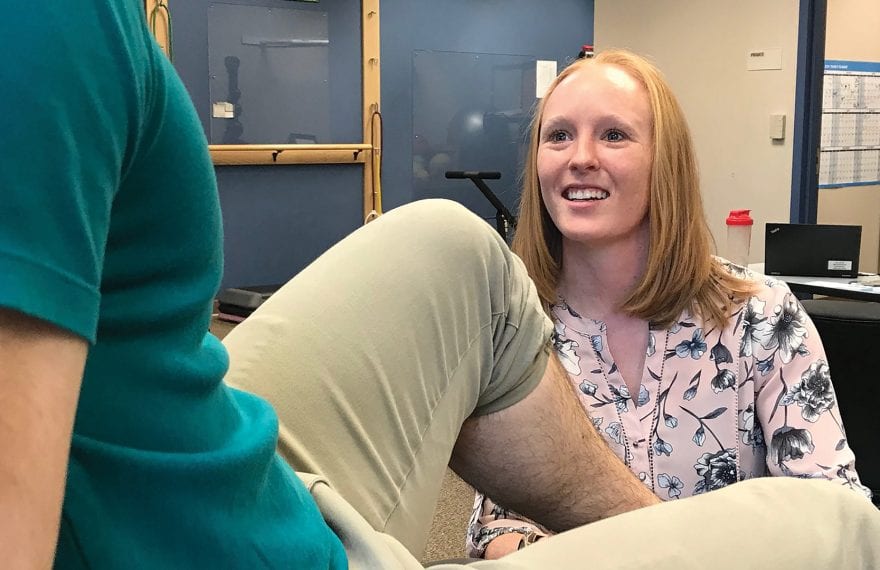 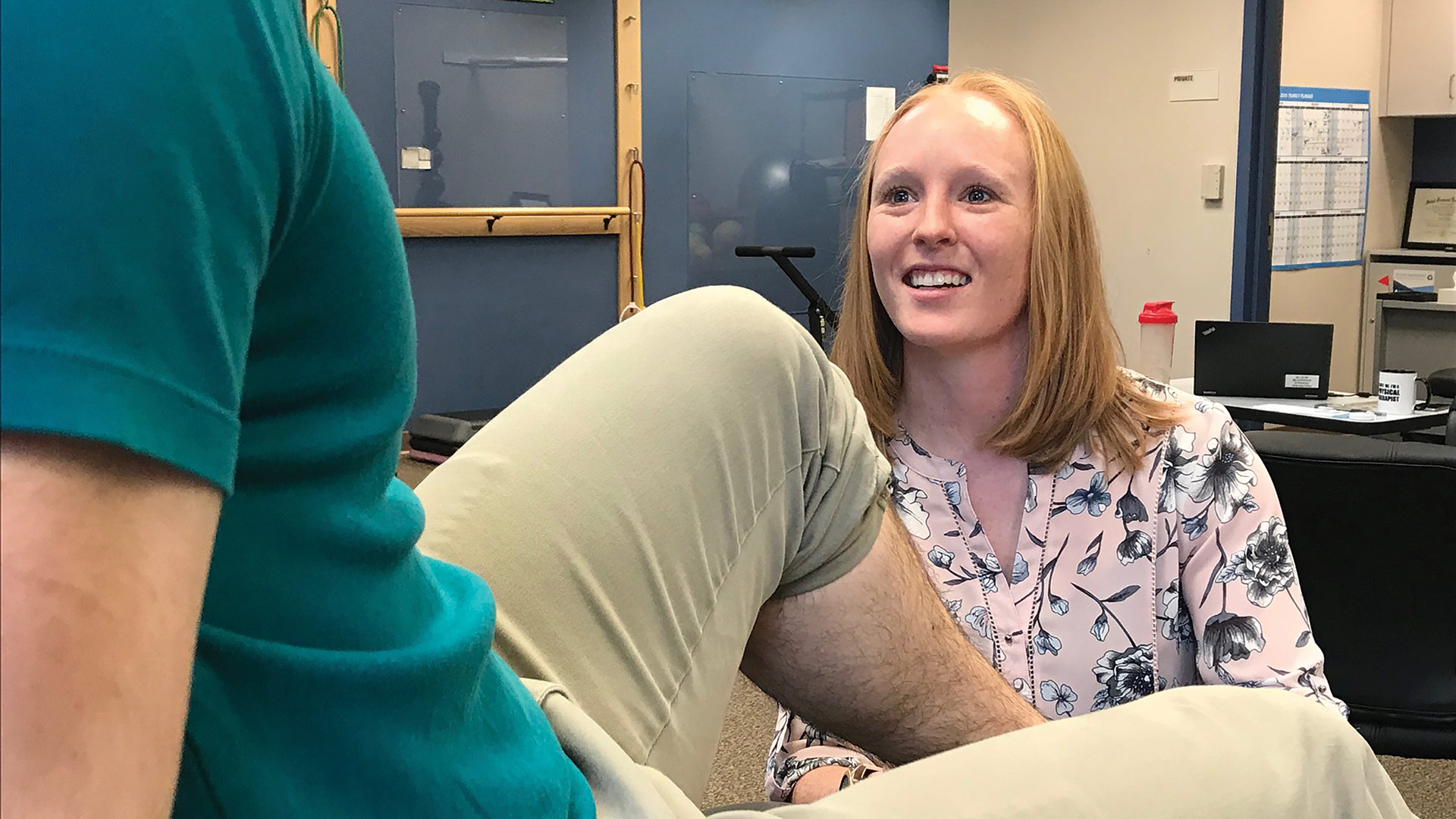 Brianna Butcher says her main priority is to help the patient gain back their range of motion, and “to turn that new joint back into a normal joint.”

In daily life, it’s easy to ignore the important role our knees, hips, and shoulders play in walking, performing simple activities, and helping us get around in the world.

Most people notice these essential joints only when they are in pain. As we age, the onset of arthritis can bring excruciating pain even to the most basic tasks such as climbing stairs and walking.

If medication and physical therapy do not provide relief, then doctors will recommend joint-replacement surgery.

Considered a safe and highly effective surgery, more than 600,000 knee replacements and more than 300,000 total hip replacements are performed each year in the U.S., according to the Agency for Healthcare Research and Quality. The surgery involves replacing an arthritic or damaged joint with a prosthetic made of metal, plastic, or ceramic to replicate the movement of the joint.

Once the surgery is done, then the real work begins, said John Jury, head physical therapist at Weldon Rehabilitation Hospital, noting that “a successful outcome depends on how much effort the patient puts into their rehabilitation.”

The vast majority of patients Jury works with have had total knee or hip replacements, while those with partial knee and shoulder replacements comprise a smaller number. Candidates for joint-replacement surgery tend to be age 50 and up.

“It’s prudent to wait as long as possible to do the surgery so they only have to have it once in their lives,” he said, noting that, if someone in their 40s had a joint replaced, it could wear out in their 90s and when they may not be a good candidate for surgery.

Physical therapy begins on “post-operative day zero,” which means only a few hours after the surgery takes place. Jury said therapy on the same day is especially common for knee replacements. The main goal of this initial session is to initiate moving, standing, and weight bearing, typically with the help of a walker.

“Over the next couple of days in the hospital, we will continue to work with patients on their flexibility with the joint, range of motion, strengthening exercises, and mobility to help get them home,” Jury said.

Some medical centers around the country send knee-replacement-surgery patients home the same day as the procedure. In Western Mass., Jury said, most patients with a total knee replacement are discharged within a day or two, while hip-replacement patients may be hospitalized for up to three days. Both operations are followed up with two weeks of home therapy.

“It’s prudent to wait as long as possible to do the surgery so they only have to have it once in their lives.”

And it’s during outpatient therapy that people like Brianna Butcher, physical therapist and supervisor for Select Physical Therapy, take over joint-replacement rehabilitation.

“Our main priority is to help the person gain back their range of motion and their gait mechanics, which is especially important for knees and hips,” she said. “We’re really trying to turn that new joint back into a normal joint.”

In addition to traditional techniques, therapists are finding new ways to help people get back to day-to-day life with the help of technology. Butcher said one effective tool she has used is called an AlterG. She described it as an anti-gravitational treadmill that uses inflated air to support the body during therapy.

“For people who are tentative about putting weight on their joint, this is a good way to help them get back to normal walking,” she said.

Also finding their way into physical therapy are phone apps. A patient recently asked Jury if there was a way to measure his knee’s range of motion from home.

“We found a couple of apps you can download to your phone that will measure range of motion,” he said. “A family member has to hold the phone next to the patient’s knee, and their movement can be recorded.”

Tele-rehab is another development that is showing promise in several studies here and abroad. Jury said the idea is to share a video of rehab exercises with the patient and follow up by phone, FaceTime, or another video app. The studies compare tele-rehab with the gold standard of care, which is outpatient therapy after a knee replacement.

“They are finding that patients can achieve similar outcomes to outpatient,” he noted, “and they are reporting higher satisfaction scores because they don’t have to get out of the house to drive to a clinic.”

Butcher said her patients are usually driven to physical therapy by someone because they are still taking pain medication and cannot yet drive.

Once the patient arrives, she often observes their sense of fear about starting the therapy.

“For some, this is their first time seeing a physical therapist, and the process can be painful, especially for knees,” she said. “We try to work within that threshold to help the patient make progress while being mindful of the pain, which can be difficult for some.”

On occasion, patients who already have a replacement joint on one side of their body will need a second one, such as the opposite knee or opposite side of the hip.

Butcher said that, in her experience, at least one of those joints proves difficult and painful for the patient during physical therapy.

“The body always responds a little differently from left to right,” she said. “If, for example, therapy on the left hip went great, the right hip just doesn’t want to cooperate.”

In Butcher’s view, therapists often get a bad rap because of a false perception that they somehow enjoy putting people through pain.

“Our ultimate goal is to help patients get back to a better place than before their operation,” she said. “We’re on their side.”

Jury pointed out that therapists are a valuable resource in terms of guiding the patient on what to do, but it’s also up to the patient to follow through. “It’s not an easy rehab, but you’re only going to get out of it what you put into it.”

For those who make the effort, the results can be life-changing. The American Academy of Orthopaedic Surgeons uses the term “second firsts” to describe the experience when patients can once again enjoy things like hiking and other activities that were not possible before their surgery.

For many patients, Jury noted, their biggest revelation is the ability to move around in the world again without a walker or a cane.

“They are happy to be able to return to a certain normalcy of activity,” he said. “Of all the patients I’ve talked to, none of them have said they wished they waited longer for the surgery.”

Butcher talked about a recent success story in which the patient had undergone a total replacement surgery in his left knee before working with her.

“All he wanted to do was to get back into bowling again, and he’s throwing harder now than before his operation,” she said.

After living with pain for many years, people who have joint-replacement surgery and follow through on their physical-therapy program can often succeed to a point that Butcher describes as almost like having a new life again.

And this new life is the result of successful teamwork — with the patient being a big part of that team.