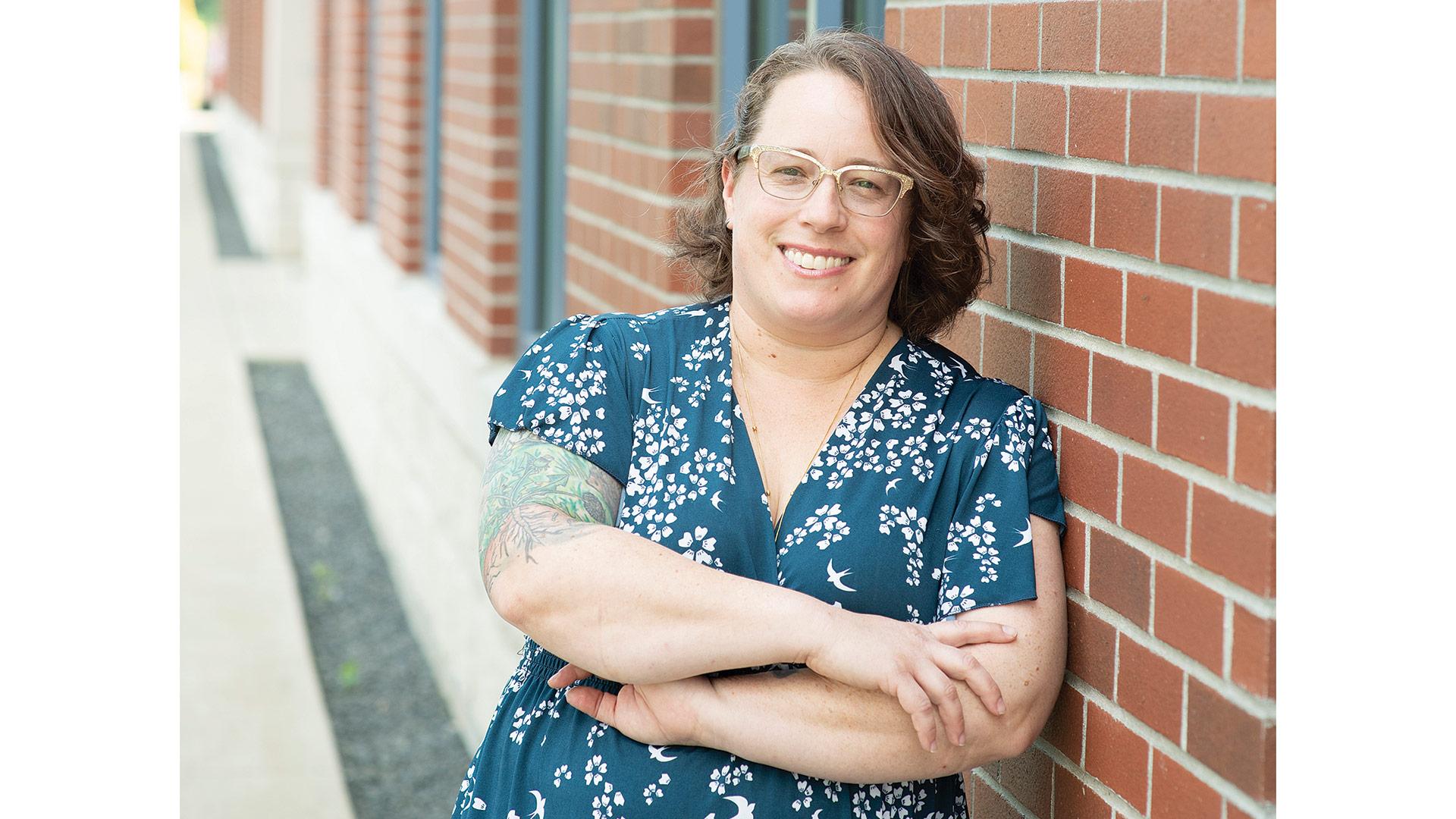 She Pioneered Appropriate Care for a Population That Sometimes Lacks It

“My first career goal was to be a standup comic, but I eventually realized I didn’t have the stomach for all the rejection that involved,” she said.

As it turned out, comedy’s loss was healthcare’s gain. For the past several years, she has been a family nurse practitioner and director of LGBTQ Health Services at Cooley Dickinson Health Care — and is now beginning a new career at Transhealth Northampton.

In doing so, she will continue her pioneering work providing culturally sensitive healthcare for often-marginalized populations — work that many health organizations have since adopted, long after Nesteby became an early pioneer in this region — and a true Healthcare Hero.

“I thought, if my friends can’t access good care in San Francisco, is there anywhere they can? I also thought, well, I could do that.”

According to the Centers for Disease Control and Prevention, members of the LGBTQ community face an increased risk of health threats due to discrimination and stigma. In her role with Cooley Dickinson, Nesteby has worked to bring more equity and compassion to healthcare for the LGBTQ community. As a practitioner, she has maintained a patient panel of about 500 people, many of whom are transgender.

It’s a passion that predates her medical career, to be sure. Since college, Nesteby has had an interest in healthcare among marginalized populations, but at the time, care focused specifically on LGBTQ people didn’t exist. In the early 2000s, while in San Francisco, she learned that some of her LGBTQ friends were not able to access healthcare.

“I thought, if my friends can’t access good care in San Francisco, is there anywhere they can?” she said. “I also thought, well, I could do that.”

So she did. And for her years of cutting-edge advocacy for this broad and sometimes misunderstood population, Nesteby certainly merits recognition in the category of Innovation in Healthcare.

In addition to treating patients, Nesteby’s responsibilities include training providers and staff on how to make medical facilities more welcoming and inclusive.

Much of the training I would call LGBTQ 101,” she said. “It’s a discussion on how to treat people respectfully and how to engage them in language they would like you to use.” 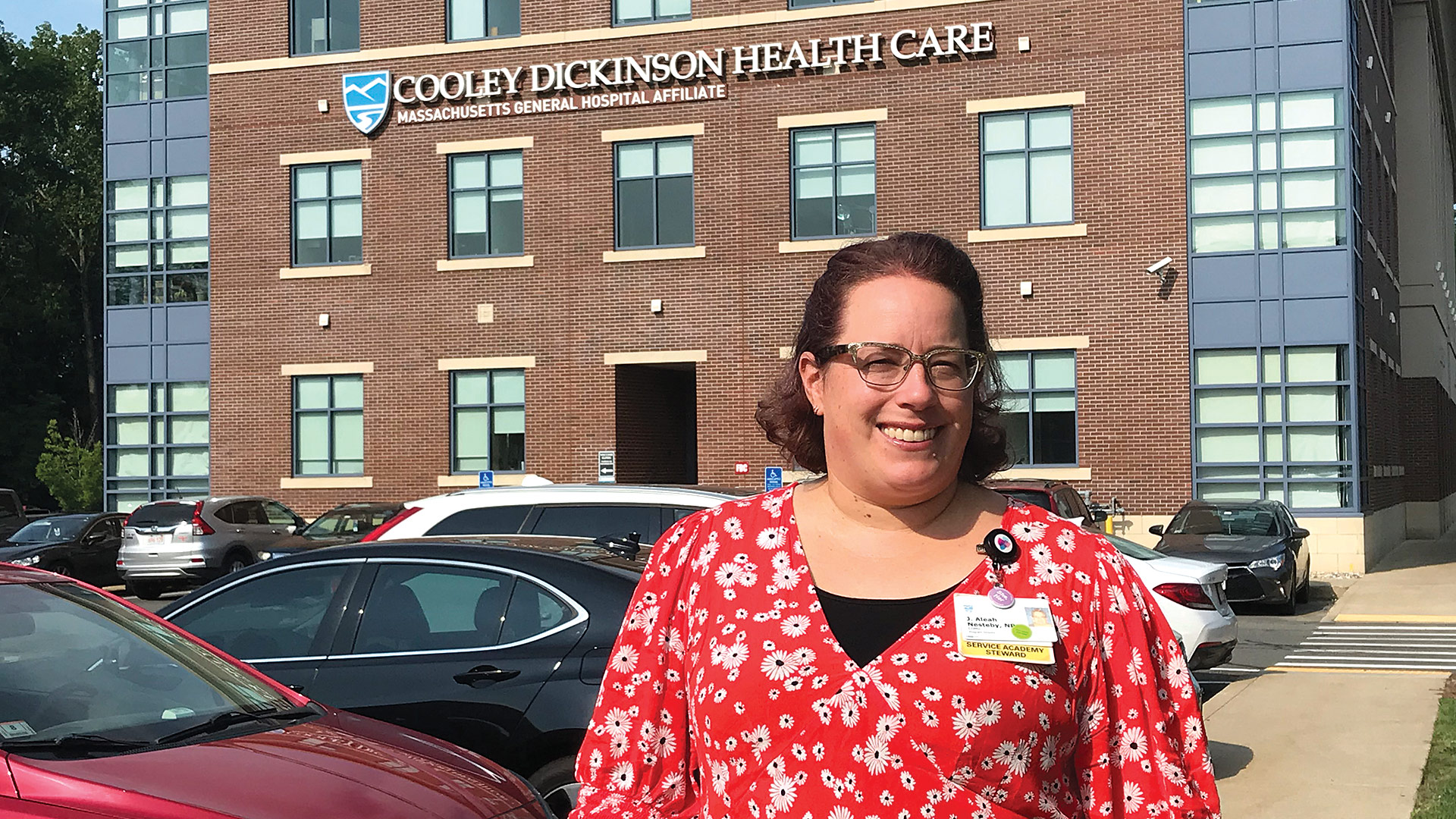 After years of pioneering work at Cooley Dickinson, Aleah Nesteby is taking her passion and talents to Transhealth Northampton.

One common question — she’s heard it countless times — challenges why LGBTQ patients should be treated differently than anyone else. She explains that everyone has unconscious biases that play into their decisions about treatment for people.

“I try to help providers understand that, even though they think they are treating everyone the same, some of what they are saying isn’t being received by the patient in the way it might have been intended.”

For instance, microaggressions are a common issue — those backhanded compliments and minor comments that might not be insults, per se, but add up in a negative way to the person who hears them. A gay or lesbian person might be told, “I couldn’t tell whether you were gay or straight,” and a transgender person might be asked what their old name was.

“It’s these low-level, unpleasant interactions that many medical folks aren’t even aware they are doing,” Nesteby said, emphasizing that training should include all employees in the medical setting, not just direct care providers. For example, a visitor to the doctor’s office typically first speaks with someone on the front desk, then a medical assistant or nurse, and, finally, with the physician or nurse practitioner.

“Even when all the providers are trained and great to be around, if the staff aren’t trained, it can still be a negative experience for some,” she explained.

Nesteby also helps providers with more detailed training that addresses health issues specific to the LGBTQ community, such as hormone therapy for transgender adults and working with transgender children.

“I’ve also trained doctors on PrEP, a pre-exposure prophylaxis for HIV,” she said. “It’s a medication people can take before being exposed to HIV to help prevent transmission.”

In some ways, Nesteby has always been an LGBTQ trainer. She was studying to be a nurse practitioner back when the transgender health movement — commonly called trans health — was just beginning. Because it wasn’t included in the curriculum, she invited a lecturer to speak to her class about trans health.

“In the beginning, there were lots of things to learn and new ground to break,” she recalled.

Nesteby is now in demand as a speaker at conferences around the country, though her appearances during the pandemic have been virtual. She also participates in TransLine, an internet-based consultation service. “People can e-mail their questions about trans health to volunteers like me, and we answer them as they come in.”

As she became established and word got out that her practice included trans health, patients would travel from hundreds of miles away just to be seen by Nesteby. However, “as trans health has become a more accessible field and more providers have become comfortable with it, there’s less need for people to travel long distances.”

Reflecting on her work with Cooley Dickinson gives Nesteby a great deal of satisfaction. From training medical staff to policies to make the hospital more inclusive, she appreciates all the progress that’s been made so far.

“While there is still work to be done, there has been a cultural shift in Massachusetts on how we view our LGBTQ patients,” she noted.

“It is rare to find a primary-care provider who understands the unique health and social needs of LGBTQ patients,” Harness said. “It’s exceedingly rare to fine one who is so skilled, passionate, and caring.”

This month, Nesteby is leaving Cooley Dickinson to join Transhealth Northampton, a clinic that provides primary care for children and adults. Her role will be similar to her current one in providing primary care and hormone management for her patients. In her new position, she will continue to educate clinicians and will also focus on educating the general public about working with the LGBTQ community.

“I’m an advocate of asking people how they want to be addressed and what pronouns they use,” she said. adding that people often get nervous they might offend if they ask, but the conversation has to start somewhere. “If you are respectful and polite, people will usually respond in kind. They only get upset when someone is rude or asking for information that is gratuitous or not needed.”

In general, Nesteby would like to see a more welcoming and affirming atmosphere in medicine.

“Ideally, I’d like all providers to have some degree of knowledge about how to work with LGBTQ patients because within that there is more opportunity for people to specialize in that care.”

Harness credited Nesteby with making positive changes in the system while always providing excellent care to the person in front of her. “Aleah has improved her patients’ sense of well-being by showing them their medical provider cares about, understands, and welcomes them,” he said.

In her eyes, though, showing compassion is similar some ways to the old adage about a rising tide lifting all boats.