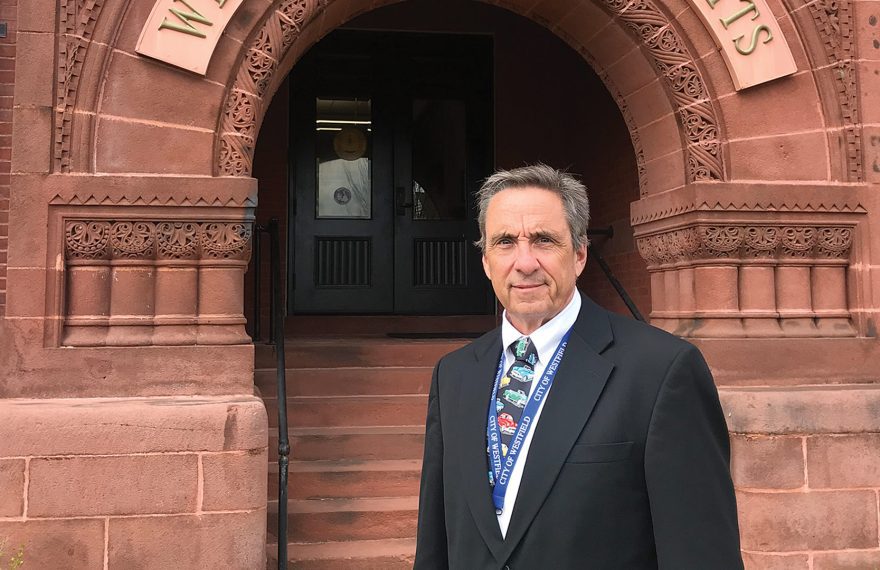 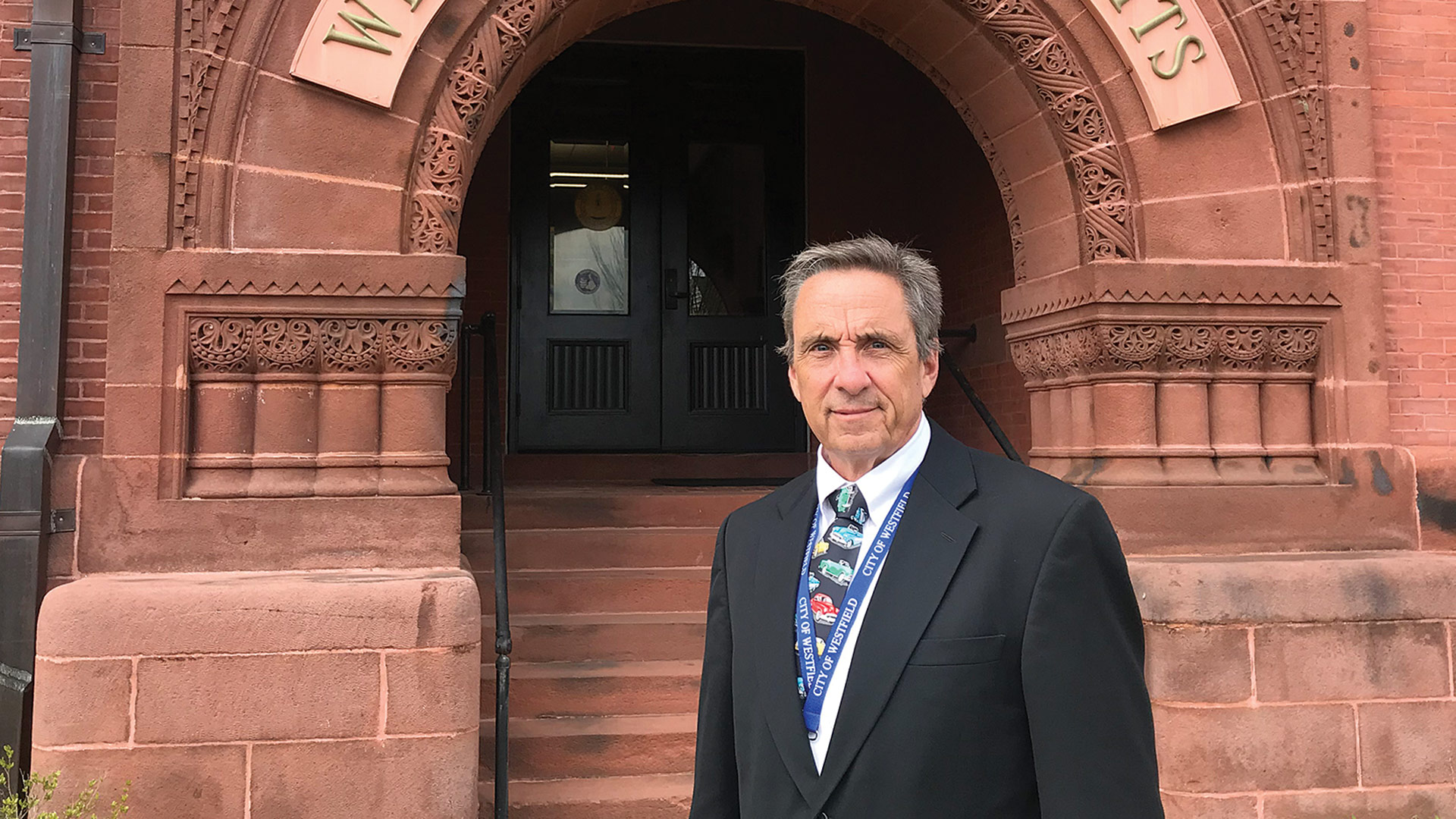 “I’m able to make an impact in areas that I wouldn’t have thought I could; the job requires a lot of problem-solving, something I’m used to doing,”said McCabe, who, after serving for 36 years in various capacities with the Westfield Police Department, unseated incumbent Donald Humason in last November’s election.

The same two men squared off in 2019, to a different result, obviously. McCabe ran then, and tried again last year because he thought he could use his leadership skills and ability to build relationships to move the city forward in several key areas. Early in his first year in office, he can already point to some progress and the potential for much more.

He starts downtown, where he’s made a point of visiting every business from Park Square to the Great River Bridge. And as he did so, he visited some that opened just months and even weeks ago, a sign of resilience and growth in a central business district that has struggled for many years.

“I’ve spoken with all the store owners, and I take part in a coffee hour with the chamber every month,” said McCabe, adding that these listening tours are educational in many respects; they let him know what businesses are concerned about, a list topped by traffic.

That’s one topic in McCabe’s wheelhouse, as his last few years with the police department were as traffic commission chairman.

One major traffic issue involves entering and exiting the Mass Turnpike in Westfield. McCabe is working with the Mass. Department of Transportation (MassDOT) to create a new eastbound entrance to the turnpike known as a slip ramp. This would greatly benefit truck traffic while at the same time, relieve much of the backup at the turnpike entrance.

“I’m able to make an impact in areas that I wouldn’t have thought I could; the job requires a lot of problem-solving, something I’m used to doing.”

“The idea is that once you get to the top of North Elm Street, you take a right and you don’t have to stop until you get to Boston,” McCabe said adding that the ramp would reduce wait times for north bound traffic by 66%. “That’s a big number.”

It would also cut in half the wait times for vehicles trying to exit the turnpike from the west during rush periods, where vehicles are often lined up for a half mile trying to access the exit ramp.

While the slip ramp has not yet received formal approval, McCabe said feedback from the state so far has been good. “Fundamentally, there were no issues with what we are proposing,” he said.

Beyond downtown and the turnpike proposal, McCabe and other municipal and business leaders can point to progress on several other fronts, including plans to create a hyper-scale data center in the northwest corner of the city.

According to McCabe, the data center is still only in the planning stage, but if it comes to fruition, this campus of buildings could be the largest development ever undertaken in this region. 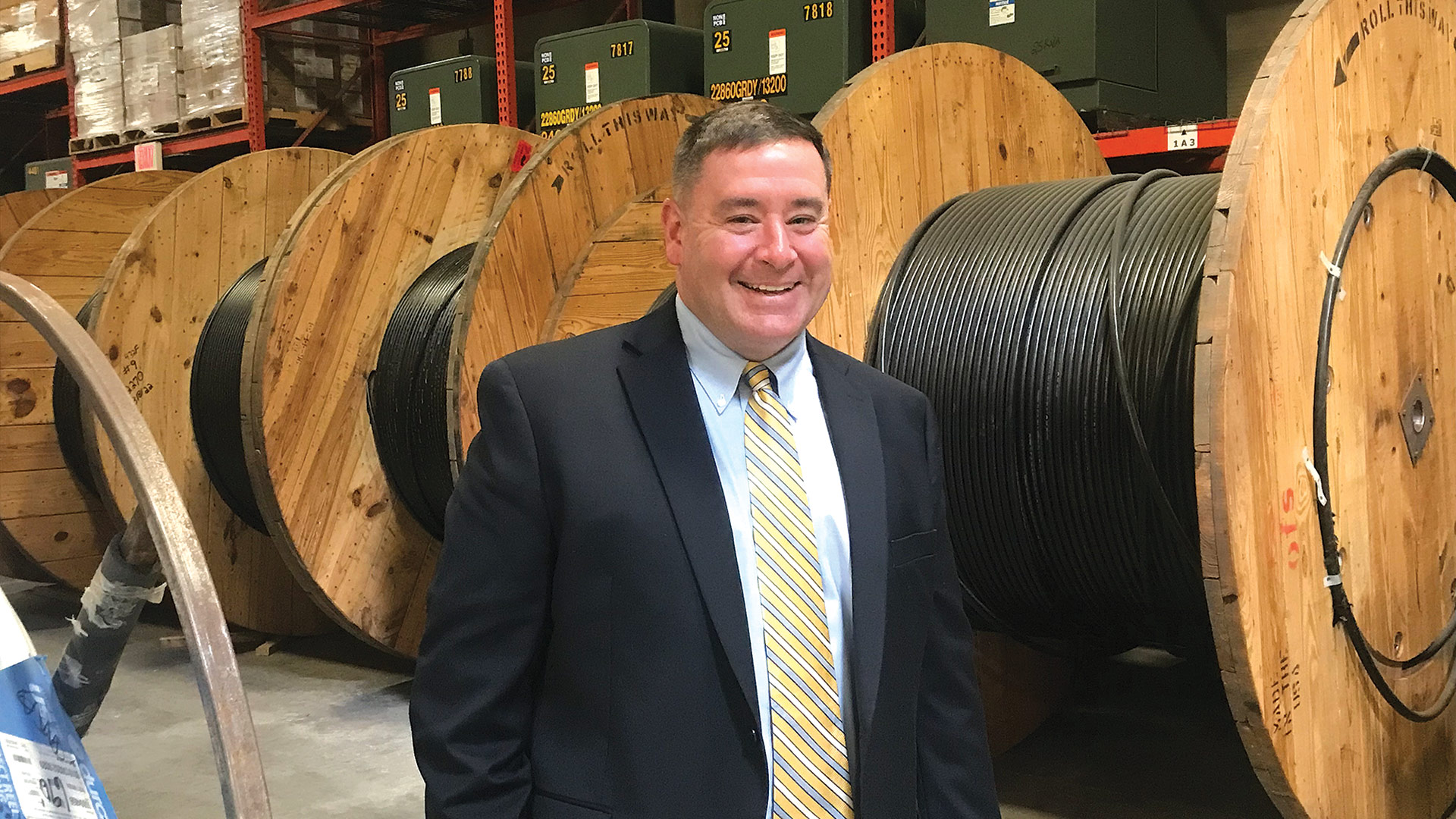 Tom Flaherty, general Manager of the Westfield G&E says his internal goal is to see 99% of the city with fiber optic access by 2024.

The plan is for the data center to occupy some 155 acres in the northwest corner of the city and cost $2.7 billion when complete.It would serve as a clearinghouse of sorts for big data companies such as Google, Amazon and Facebook.

Overall, McCabe and other city leaders say Westfield’s bevy of assets — from its location off the turnpike to its abundance of developable land center; from its municipal airport to its municipal utility, which offers a potent mix of attractively priced energy and high-speed internet — are paying dividends for the community and making projects such as the data center feasible.

That much is made clear in this, the latest installment ofBusinessWest’sCommunity Spotlight series.

Things are Looking Up

Westfield Barnes Municipal Airport is one area of town where things are literally taking off.

According to Chris Willenborg, airport manager, nearly 50,000 takeoffs and landings occur at Barnes every year. A $4.7 million taxiway apron that was completed late in the fall allows the airport to accommodate larger aircraft and improves operations on both the civilian and military side of the airport.

Three new hangars are currently under construction that will allow Barnes to have 12 to 15 more aircraft based there.

“Right now, there is a waiting list to store aircraft at Barnes,” Willenborg said. “The leases, fuel fees and other associated costs will all generate revenue for Westfield.”

With the Mass Turnpike and I-91 close by, Barnes has become an appealing airport for business aviation, which has Willenborg looking for even more hangar development. Work has also begun for what Willenborg called a “major project in the pipeline.”

“We have a $15 million to $20 million taxiway project going out to bid next year,” he said. “It’s in the design phase now and will involve relocating and widening one of our taxiways.”

On the military side of the airport, Westfield currently houses a fleet of F-15 fighter jets. Last year the Department of Defense invited air bases to make their case for hosting F-35 jets and Barnes made its bid. The DOD is expected to decide by May or June.

“The most important thing about this process is that Barnes will be getting a new fighter jet,” Willenborg said. “We will either bring the F-35 here or we will get the brand-new F-15 EX fighter. Either way, we are anxiously awaiting their decision.”

Developments at Barnes are just some of the newsworthy projects in the northern, industrial end of the city.

Indeed, another growth area for Westfield involves James Hardie Building Products, which will soon move into the former Old Colony Envelope building. Hardie manufactures construction siding products such as backer board, a drywall-type sheet used in wet areas such as bathrooms.

Meanwhile, off Route 202, both Home Depot and Lowe’s maintain distribution centers for the region. Another major retailer will soon join them as Target is planning a warehouse in the same area.

The city has been able to attract these large distribution centers — and become the preferred site for the hyper-scale data center — because of its location, inventory of land and available properties, and the abundance of cheap power and high-speed internet.

Those last two selling points come courtesy of the Westfield Gas & Electric and Whip City Fiber, a division of the G&E continues to install its fiber optic high-speed internet infrastructure in Westfield and many small towns. Tom Flaherty, general manager for the G&E, said Whip City is on track to have 85% of Westfield covered by this time next year. 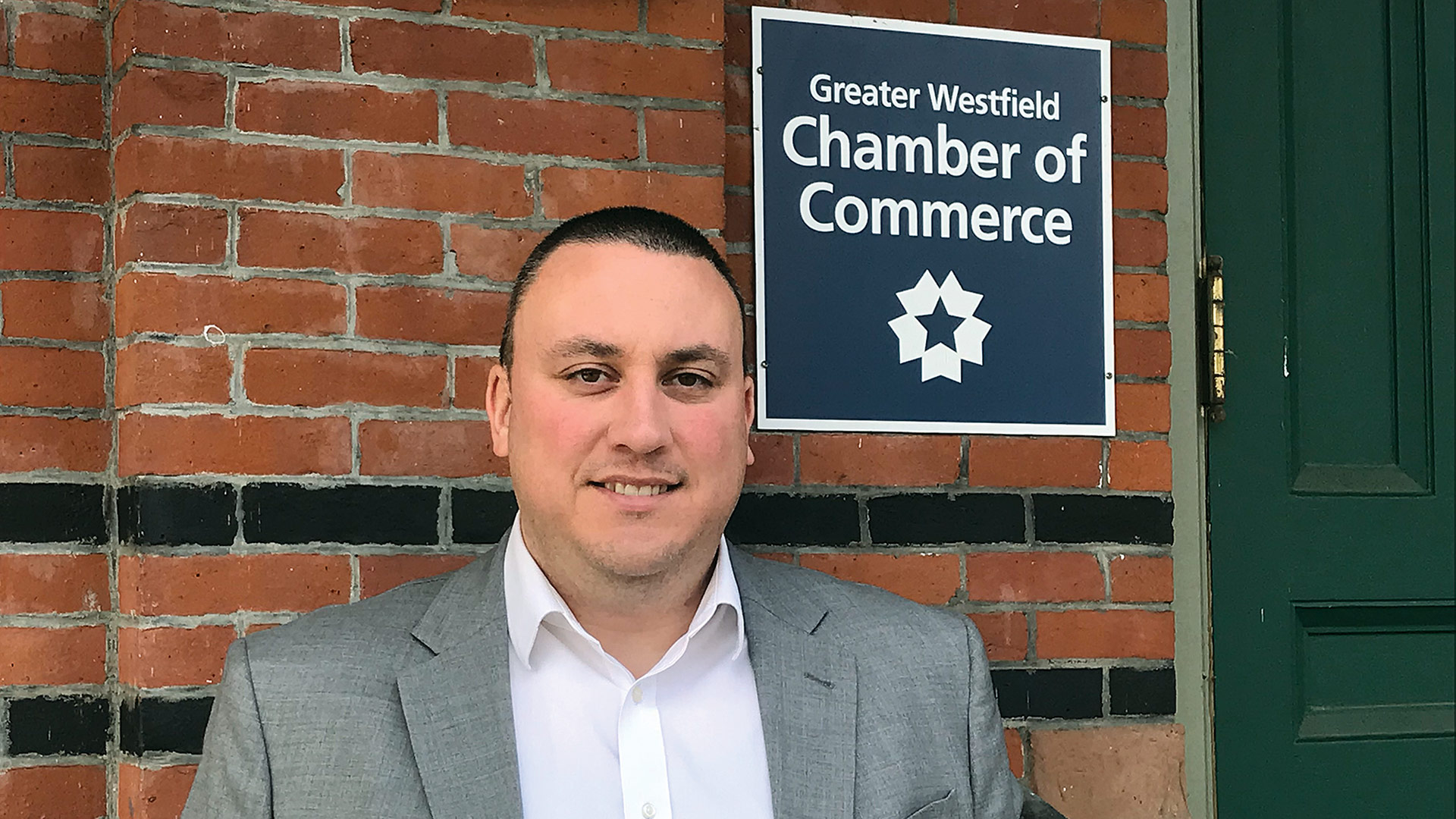 Chamber of Commerce Executive Director Eric Oulette says nearly 20 new businesses have opened in Westfield during the pandemic, a sign of entrepreneurial energy in the city.

At the same time, the company is bringing high-speed internet to 19 towns in Western Mass where no internet infrastructure previously existed. For towns like Cummington, Windsor, Heath, and others, it’s an economic boom.

“Real estate agents are using access to Whip City Fiber as a selling point to sell homes,” Flaherty said. “Because they now have internet access, one town official told us they are building five new houses, where before they were lucky to build one house every other year.”

Critics of Whip City Fiber have complained about resources going to other towns while sections of Westfield are still without fiber optic internet. Flaherty said revenues from Whip City Fiber customers in Westfield and the hill towns will help pay for finishing the job in town.

“We have most of Westfield covered and we are tackling some of the more complex and costly areas now,” Flaherty said. Installing the fiber optic cables in apartment complexes and in areas with underground wiring is more complicated and expensive.

“During the pandemic, nearly 20 new businesses opened; that blew my mind,” he said. “These folks had made the decision to pursue their vision and were undaunted by the pandemic.”

As COVID numbers get under control and the weather warms up, the chamber has returned to hosting in-person events.

“We thought that was important because it’s tough to network from behind a screen,” Oulette said. “When people can be present with each other it leads to more clients and more job opportunities. It even opens the door for us to meet businesses who might want to join the chamber.”

While membership dropped off during the pandemic, Oulette is hoping to grow from the current 230 members to 300 by the end of the year.

Several efforts are in place to encourage small business activity, such as a vacant-storefront initiative, where the city will subsidize a new business by covering half their rent payments for up to two years. There’s also a façade initiative that involves repairing and restoring building fronts for businesses in the city.

McCabe has a vision for downtown that emphasizes retailers who sell consumables.

“That means taking a chance on offering places with eclectic food and more diversity than what’s currently available downtown,” he said.

The mayor also made a promise to himself regarding the hole in downtown where the former Newbury’s store stood before it was destroyed by fire more than 30 years ago. McCabe has plans to turn that lot into a public green space.

“I’d like to see it used for farmers markets or tag sales, or just to have a nice place to eat lunch outside,” he said. “We could do a lot of different things with that space.”

He hopes the green space will be completed by the end of the summer.

“I want to bring the idea forward,” he said. “If it works — great, if it doesn’t, a green space is still better than what’s there now.”

Another goal for McCabe involves creating a sustained partnership with Westfield State University. Linda Thompson joined WSU as its new president just a few months before McCabe became mayor. Because they both began their respective jobs around the same time, McCabe is hopeful they can work together for their mutual benefit.

“President Thompson is a great person to work with and I’m looking forward to what we can do,” McCabe said. “My goal is to have Westfield State graduates consider staying here when they finish college.”

As Westfield pursues all its potential, there may be many new traffic issues in the future. That’s one challenge McCabe would gladly invite.

“I’m all about transportation,”said the man wearing a classic car pattern on his tie.