Friends of the Homeless 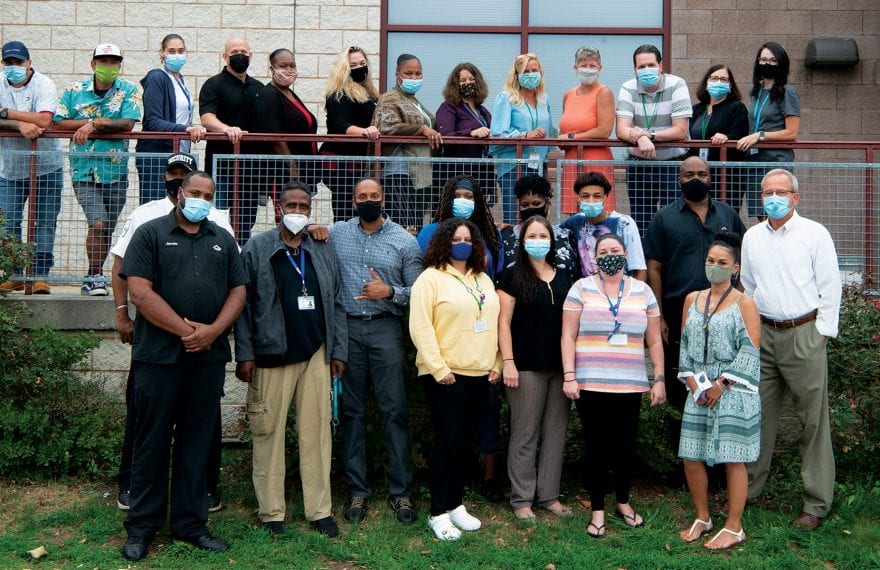 While This Shelter’s Protocols Changed, Its Mission Never Did 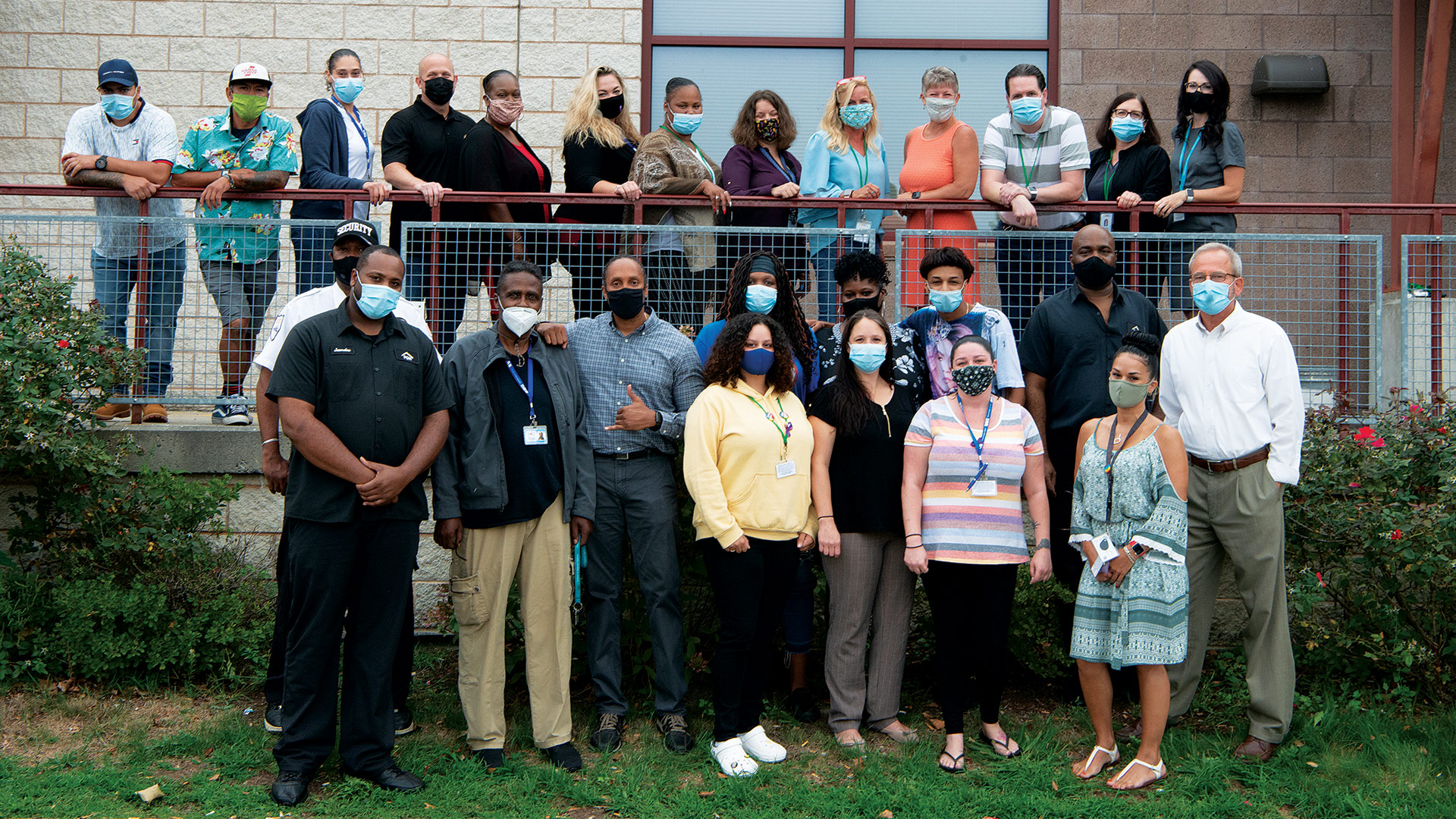 The metaphor is an easy one to draw.

“If COVID was the invading army, all of us here — every one of us — had to set the wall and hold the wall and make sure folks were going to be safe,” said Keith Rhone, Operations director at Friends of the Homeless in Springfield, a program of Clinical & Support Options (CSO).

The reality, however, was much more complex. In its dorms, its kitchen, and places where clients meet therapists, clinicians, and other staff one on one, FOH was tasked, back in March, with implementing social distancing and a host of other protocols aimed at keeping everyone safe — both those delivering a broad range of services and those receiving them — while never shutting those services down.

That they did so, and how, makes the entire team true Healthcare Heroes.

“People have to gather here, so we’re potentially a hot spot. All the credit goes to the people who kept it from being that.”

“In some ways, we can’t do anything differently,” Clinical Director Christy O’Brien told BusinessWest. “We’re never going to shut down; we’re never not going to be here. Despite the social distancing we had to do, we’re never not going to be close to our people — not necessarily physically, of course, but we still need to know how they’re doing, how we can help, all those things. Where other places were forced to move to telehealth, that’s never going to work for us. The needs are still the needs.”

Those needs encompass not only shelter, but clinical services, such as mental-health and substance-abuse recovery coaching and therapy; housing — FOH has a number of lease-holding tenants; three meals a day; clothing and toiletries as necessary; transportation and delivery services; prescription pickups; case management … as Rhone put it, “the job here is whatever it takes.”

COVID-19 didn’t arrive at an ideal time, said Bill Miller, vice president of Housing and Homeless Services — not that there’s ever a good time for a global pandemic.

“We were coming out of a winter where we served more people and were more full than we had ever been in our history,” he recalled. “So it was a tough winter, and what the pandemic required was a complete shift in our mindset because our inclination and our mission has always been the same: how do we serve as many people as possible? So we wanted to continue to serve in the same way, but we had to adopt a whole new style.”

Among the changes, picnic tables and tents were erected outdoors — spaced apart — to accommodate distanced meal lines. Volunteers, who are instrumental in the service of FOH meals and other activities, were temporarily suspended. In the dormitories, some beds were removed, with overflow space employed in the dining room. Partitions went up, and guests were arranged head to toe when sleeping. 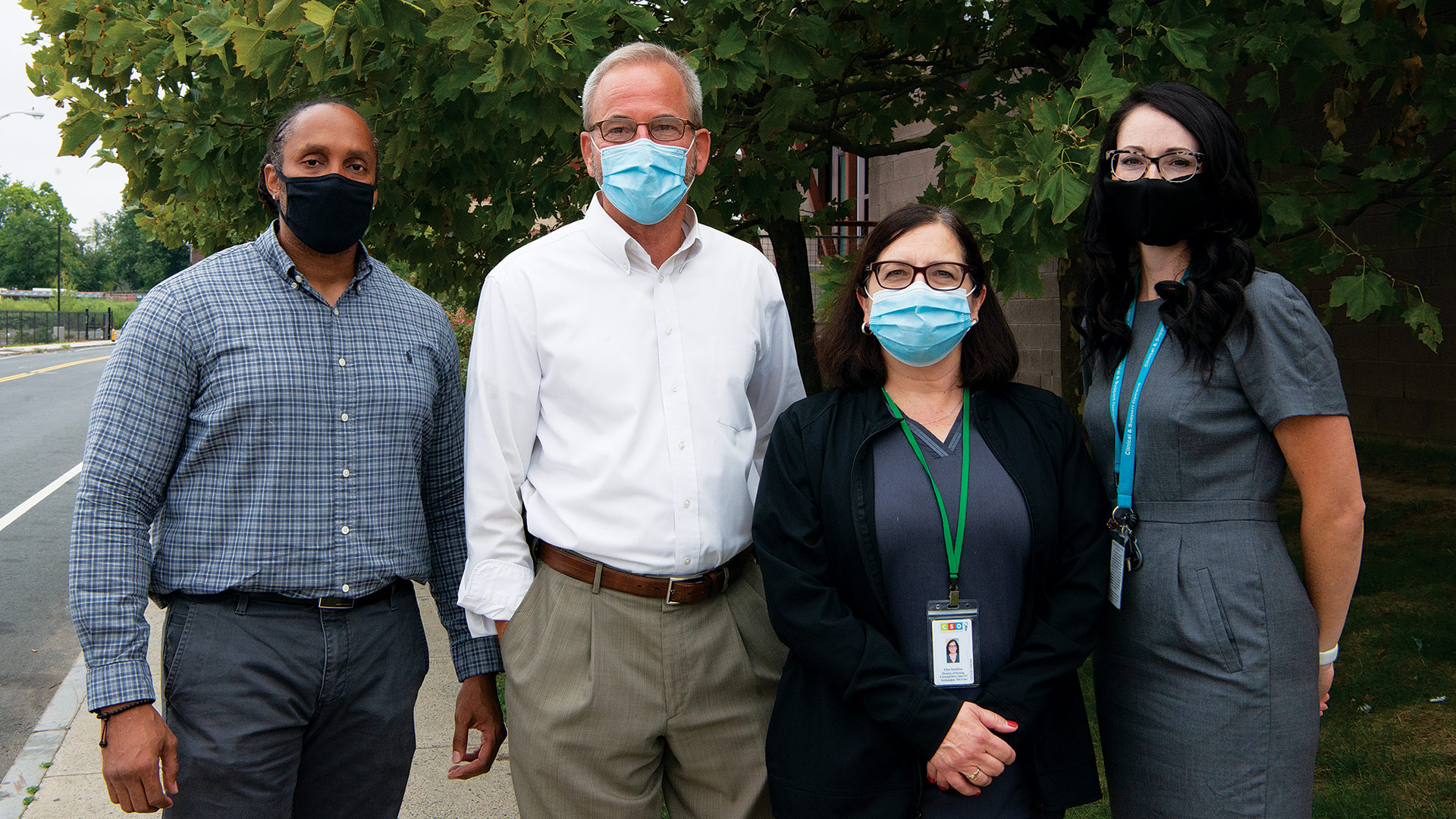 Some of the leadership team at Friends of the Homeless, who had to quickly figure out new protocols in the spring while continuing to serve clients at the same level as before.

Additional temporary staff were hired to more regularly and thoroughly sanitize spaces, and hand-sanitizer stations were mounted throughout the campus. Dozens of donors and staffers designed and sewed homemade cloth masks so that each shelter guest would have reusable, washable masks.

Meanwhile, from the pandemic’s earliest days, before on-site testing became available, temperature screenings and interviews were conducted to alert the team to early signs, and as the situation progressed, Baystate and Mercy medical centers were quick to work with FOH on testing.

CSO also staffed and managed large tent facilities, which were erected in partnership with the city of Springfield and served as emergency accommodations in the event of positive cases (see the related story of another Healthcare Hero, page xx). When another shelter in the city needed to close due to guests testing positive, the CSO team was able to quarantine those who had been at risk and refer those who ended up testing positive to state-run MEMA isolation sites. FOH further assisted many of those individuals once their isolation periods were completed.

Why was all this critical? Simply put, while COVID-19 has swept through homeless populations in Boston, Worcester, and other cities, homeless individuals in the Greater Springfield region have been largely spared, thanks to the quick — dare we say heroic — work of the team at Friends of the Homeless.

“People have to gather here, so we’re potentially a hot spot. All the credit goes to the people who kept it from being that,” Miller said, adding that “there wasn’t one person who backed out, who wasn’t going to show up for work. We have a dedicated team who have been here for a long time. It was just incredible how everybody showed up.”

“I like the fact that we work in an environment that cares about people.”

It wasn’t lost on Miller that many people working at Friends of the Homeless fall into high-risk categories when it comes to COVID-19. “To have people come into work anyway is just striking.”

“Everyone came in and suited up and did the work,” added Delphine Ray, manager of Case Management Services. “They didn’t hesitate. This is our home away from home, and, by the grace of God, we managed to pull through.”

It wasn’t always a top-down strategy, Miller added. “There was a fad in business management some years ago — idea-driven organizations. That meant the ideas came from staff at all levels. That’s what we saw here. ‘What if we try this?’ ‘OK, let’s do that.’ Because this was something we’d never seen before, and we didn’t know what to do. And it ended up going well. Everybody was on high alert, and everyone had ideas.”

O’Brien also praised clients of Friends of the Homeless for taking the pandemic seriously and getting tested in the early days, before much was known about the virus and they were already preoccupied with some very real concerns, from mental health to lack of housing. “COVID wasn’t a primary concern for a lot of people. But they jumped on it when informed.”

He recalled warm moments, too, among upsetting ones — “incredible moments of humanity, seeing people come together in a time of crisis and fear. It was very genuine.”

That said, the need for the broad array of services provided by Friends of the Homeless to hundreds of people every day remains persistent, as does COVID-19 itself, as the cold weather approaches — not that those needs go away in the warmer months, Miller said.

“There may be peaks and valleys of needs; it’s not predicated only on cold weather. We used to see more of a lull in summer, but not so much anymore. And when times are hard economically…”

He didn’t have to finish that thought to register his point, which is, the tougher a community’s social and economic challenges, the more necessary FOH becomes.

“I like the fact that we work in an environment that cares about people,” Ware added. “When you look nationally and globally, you see so many people suffering, homeless, without food. We’re just a small place that takes care of those needs, but nationwide, so many people are suffering in this way. I’m proud to work in a place that takes care of people who need it. We’re one of the only places around here that does it on the level we do.”

As noted earlier, this is not an organization that can just shut its doors to the ‘invading army’ of COVID-19.